The first thing every player must learn while beginning their journey with Diablo 2 Resurrected is fast travel via portals. On this page of the guide you'll learn how to use fast travel, how to conjure a portal, and whether it costs you anything.

By using a Scroll of Town Portal - an item you can find or purchase (in early game they're sold by Akara) - you'll conjure a portal at your location. It's one time use only, but it'll transport you into the Act's main camp / town and back. 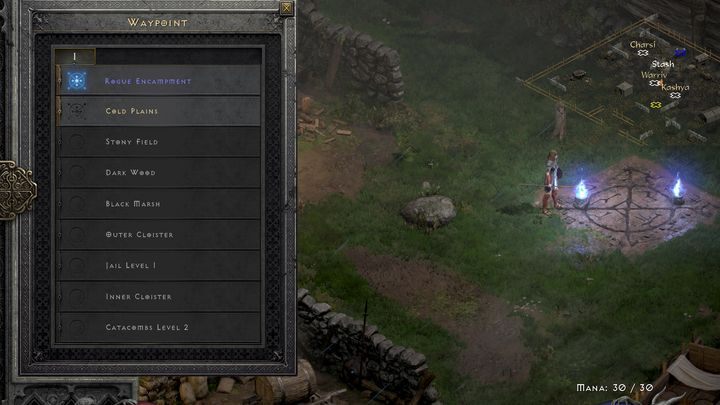 The second travelling method is finding Waypoints in set locations. Moving between them is free and doesn't have any negative effects. Once activated, Waypoints are available for travel forever (even after turning the game off). Using them, you can also see the list of locations containing unactivated Waypoints the player has yet to find.

If you conjure a Town Portal but don't intend to return to your current location, ignore it. It'll be replaced by the next Portal you conjure.

Waypoints can be found in every Act. They will also allow you to travel between locations unlocked in different Acts. Once unlocked, a Waypoint never disappears, even if you turn the game off.