The unofficial guide for Deus Ex: Mankind Divided contains a set of information needed to finish it, and to discover its full content. The initial pages of the guide touch upon the most important elements of the gameplay, focusing on the elements which had been changed as compared to Human Revolution, contain a comparison of available augmentations along with the suggestions concerning the order of acquiring them, and inform how to unlock achievements.

The guide mostly focuses on the comprehensive walkthrough for the game. This chapter contains very detailed descriptions of all main and side quests. The mission descriptions contain various ways of reaching the corresponding areas, and include various decisions and their consequences. The walkthrough includes high-quality maps of all major and secondary locations. The subsequent maps contain markers of, among others, important quest locations or places with valuable items. The final pages of the guide are various comparisons, including information about the location of dealers or eBooks.

Deus Ex: Mankind Divided is a direct continuation of the 2011 game Deus Ex: Human Revolution. The plot of the new installment takes place in 2029, and once again, its main character is Adam Jensen, who has to solve a global intrigue, while visiting futuristic cities (e.g. Prague) in the process. The new game, following the pattern of its predecessors, combines elements of an action game and RPG genre, emphasizing freedom of exploration and choosing your own approach to gameplay. 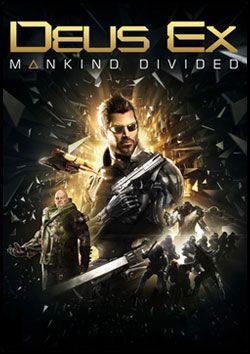 Deus Ex: Mankind Divided, the fourth major entry in the series, was developed by Eidos Montreal with PCs and the 8th-generation consoles in mind. The action of Mankind Divided starts in 2029, two years after the events presented in Human Revolution. After the infamous incident with biochips that made augmented people attack everyone on sight, societies divided into supporters and adversaries of augmentations. In the game, we once again assume the role of Adam Jensen. The heavily-augmented protagonist works for the Interpol as a part of group called Task Force 29, which was established to combat terrorism, and — at the same time — collaborates with a group of hackers by the name of Juggernaut Collective. Jensen's ultimate goal is to work out the sinister Illuminati.

Similarly to the previous installments in the series, Deus Ex: Mankind Divided offers non-linear and varied approach to the gameplay. The developers let the players play in two basic ways: one is focused on action and open combat, while the other rewards sneaking, infiltration and silent elimination of our enemies. Adam Jensen gained a number of completely new skills. Augmentations in Mankind Divided are about twice as numerous as in Human Revolution. The protagonist can now hack turrets, robots and cameras remotely; he may also execute nearly instant jumps on short distances. The blade on his forearm might be used for direct melee attacks or to shot lesser projectiles. There is also an augmentation that incapacitates our enemies with electricity.

As the first installment of the series created solely for the 8th-generation platforms, Deus Ex: Mankind Divided is powered by an entirely new graphic engine called Dawn Engine. It was developed by Eidos Montreal in collaboration with AMD in order to fully utilize the potential of high-end PCs as well as PlayStation 4 and Xbox One.

Sunny Cyberpunk is not a bad thing, so don't worry about Cyberpunk 2077

Having divided fans of the genre across the world, the now infamously bright-and-colorful Cyberpunk 2077 E3 trailer left everybody asking, OK, so can it be both sunny and cyberpunk? The definitive answer is: hell yes.

Recently, weve been hearing rumors about the alleged suspension of the Deus Ex series. In this article, Id like to present possible reasons for such development and share some of my thoughts on the present condition of the said franchise.