On this page of the Destruction AllStars guide, you'll find a number of tips and tricks that should help you in winning your first multiplayer match. These hints will also come to be useful in the future, helping you win further matches. 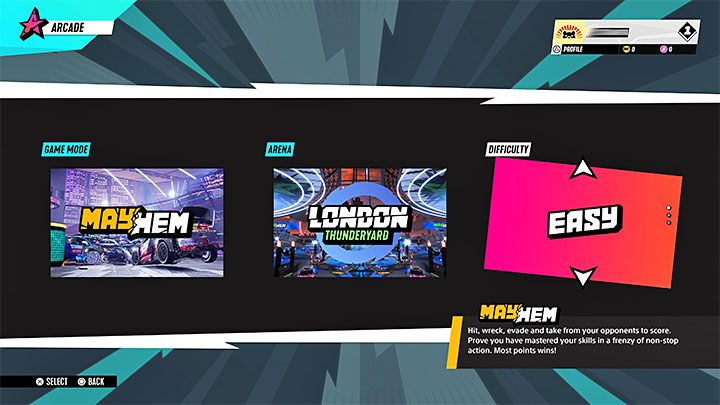 The following tips apply to multiplayer - online matches with up to 15 live players. However, the information contained on this page may also be useful to you when playing with bots controlled by artificial intelligence. In most modes, bots are not that skilled and are typically less aggressive (e.g. they rarely attempt to Ride a controlled car and it is easier to throw them off from the roof of the vehicle). Moreover, in the case of the arcade mode, you can set the difficulty level of bots (as shown in the attached picture) in order to match their skill level to your own preferences.

When playing with live players, you need to be aware that:

Our tips refer to Mayhem mode, although the information contained in them can also help you to some extent when playing other gameplay modes. The available game modes are described in detail in a separate chapter of the tutorial. 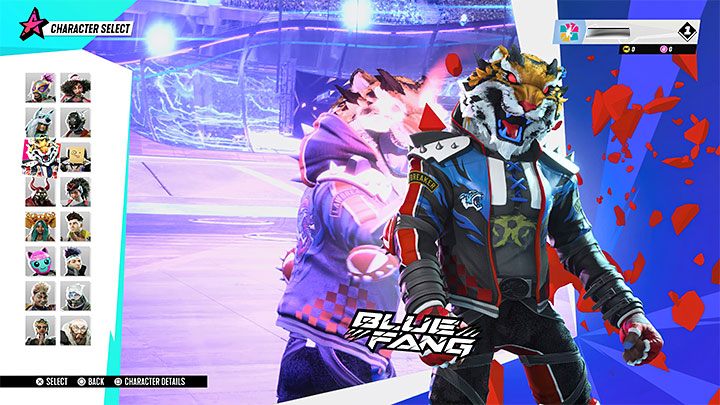 The character that we think is best at gaining an upper hand and finally, winning the match (as well as the next) is Bluefang (above image). The biggest incentive to choose this character is the Shredder mega vehicle which, when properly used, is able to eliminate many (even several in one streak) opponents. Shredder has a lot of health points and even in its default state can absorb a lot of punishment before it is destroyed.

Keep in mind that in multiplayer mode up to 4 players can choose the same star within a given match. Try to quickly "book" Bluefang so that you do not have to choose another playable character or repeat the matchmaking process. 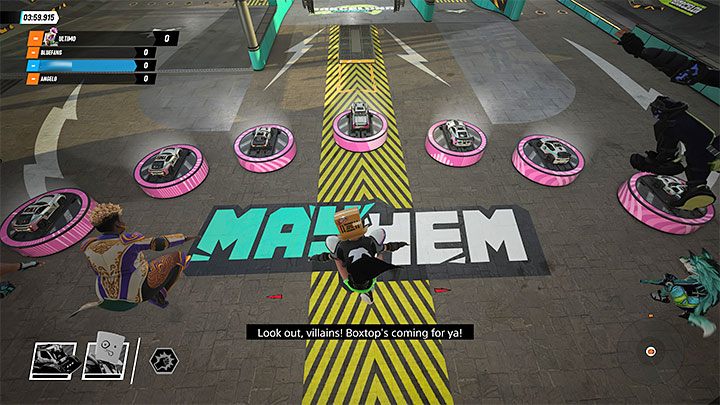 At the very beginning of the game try to capture one of the standard vehicles. Run in a straight line towards the nearest parked machine, make a perfect jump towards the ledge and finally press Triangle as quickly as possible to board the vehicle. 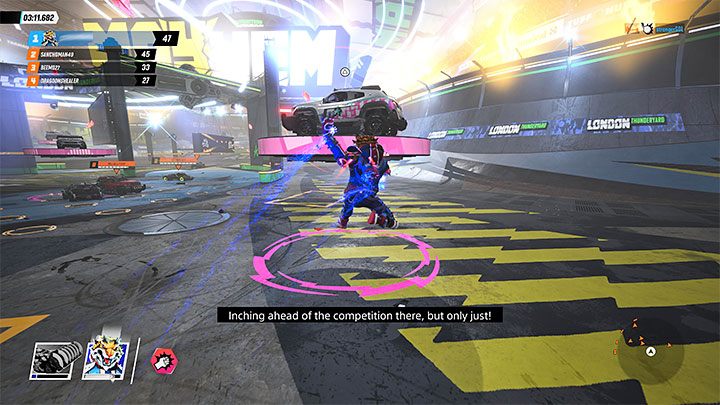 There is also a very possible scenario that you will not be able to get a vehicle right away. In such cases, it is best to: 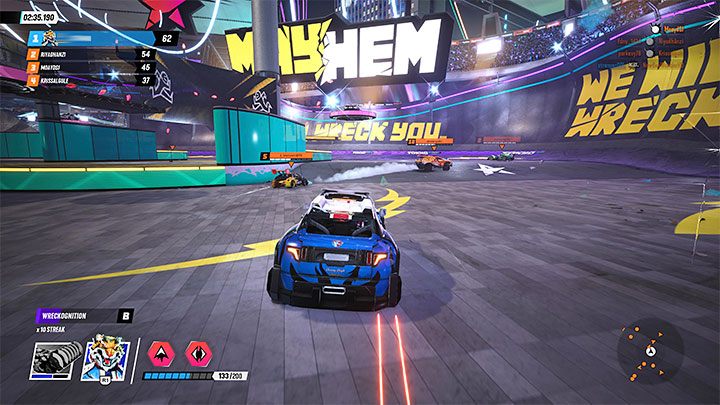 The best way of earning points is to hit your opponents while at full speed. This will ensure that the opponent will receive damage and that you will get more points if the hit is powerful enough. In addition, with larger crashes, there is a chance that you will destroy the opponent's car and get bonus points. Try to plan in advance who you want to hit - ideal "candidates" are players who stay idle or move at low speed, so there is less risk of missing.

Make use of Slams - you can use them for front or side attacks. Fire the ability when the chosen enemy is close. This way, you'll have a better chance of succeeding. 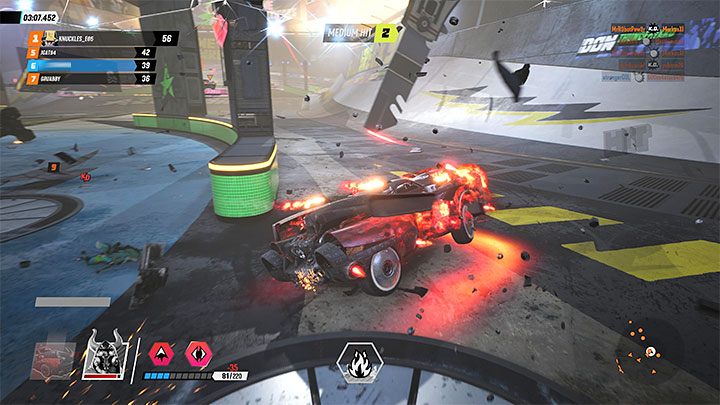 You can also try to hit opponents that walk on foot around the arena, although this is a bit risky: 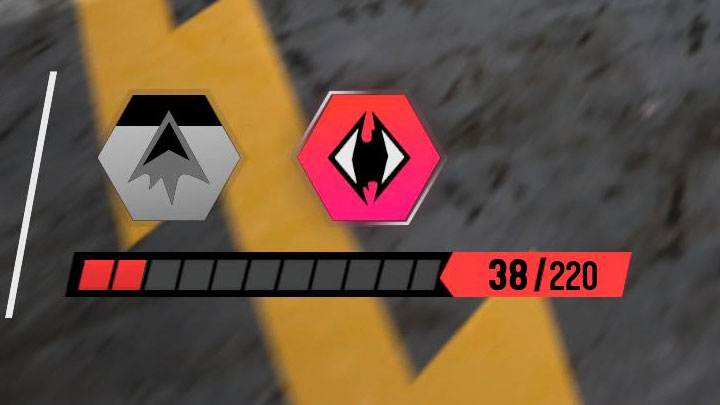 Do handbrake turns with your vehicle away from other participants of the match. This is very important in order to reduce the risk of being targeted by another player when performing a turn. Remember that you can use the handbrake to quickly change direction, although using it slows the vehicle down a lot and you may be attacked by someone in the meantime.

Watch the vehicle health bar and react when it's low. In case things go south you can use a very useful Eject option. Approach the platforms with unused standard cars, eject and land close to them and board them to assume control of a new means of transport and continue the match without any hindrances.

We advise you to stay away from other players ' mega vehicles unless you see an excellent opportunity to perform an attack on a mega vehicle, for example, when its breaker is off. You may easily be eliminated if an enemy Mega Vehicle activates its breaker and your vehicle is near it.

Summoning a Hero Vehicle and using its Breaker 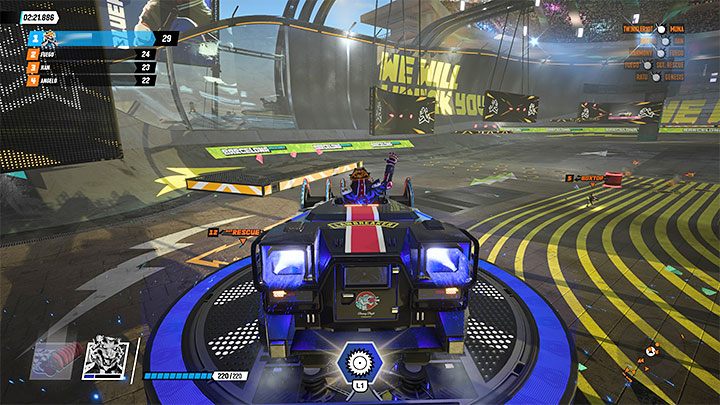 Regardless of whether you play as the suggested Bluefang or as any other hero, call your Mega Vehicle as soon as it's possible. Thanks to it, you can now start hunting other players.

Don't get too carried away by the fact that Mega Vehicles have more health points than standard cars (in case of the Shredder, 220 points) The hero's unique car can also be quickly destroyed, especially if you fall victim to a strong impact and/or attack by another mega-vehicle. 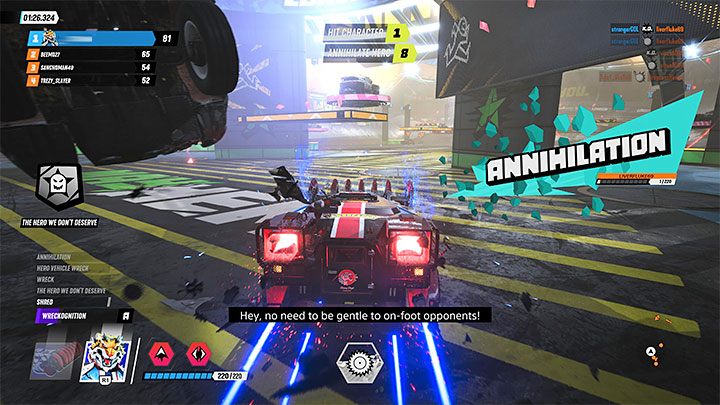 Have the vehicle breaker ready and use it at a right time. In the case of a Shredder, the vehicle associated with Bluefang, the Breaker activates a shredder at the front of the car's body, effectively destroying vehicles it comes into contact with. Note, however, that with the breaker activated, Shredder moves rather slow. You can avoid this problem to some extent,

Mega Vehicle breaker has a limited duration, but after it's over, you can go back to normal hunting and wait for its next reload. 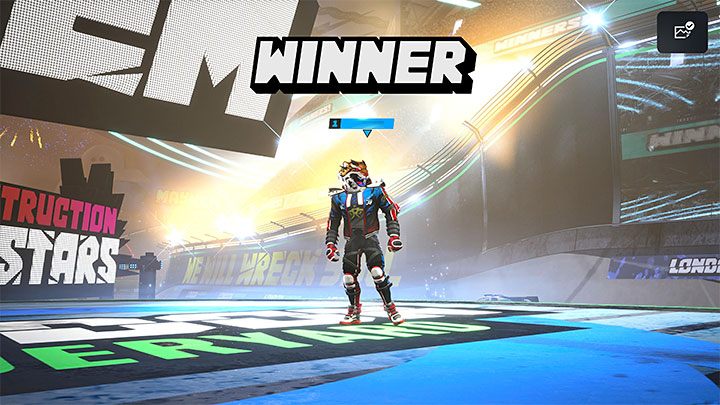 Try not to give up until the very end of the match, unless you're losing by 20-30 points, at which point it's largely impossible to win. You can still make up for the losses, especially if you are lucky and hit/destroy a few vehicles in a row, or make use of Hero Vehicle in the final seconds of the match.