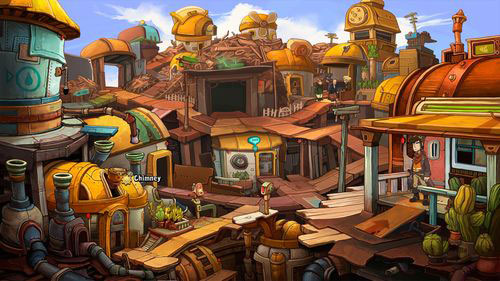 Leave Toni's shop and look at Wenzel's house chimney (to the left). It is secured with some kind of lid - maybe because Rufus used it as a target for his spitting practice. Enter Wenzel's home. 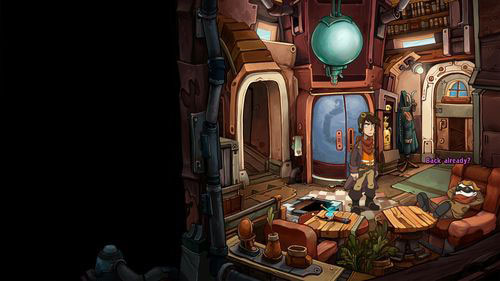 Two friends will have a conversation. It turns out that Wenzel managed to open the trunk in Rufus's house and found Divining Rod inside. Legend says that Rufus's father used it to find a water vein, on which Kuvaq is built. Ask Wenzel about missing ingredients (optional). There might be several bottles of pure water hidden in the Town Hall and bull's blood should be very revitalizing. After all, he doesn't want to give you the rod back. 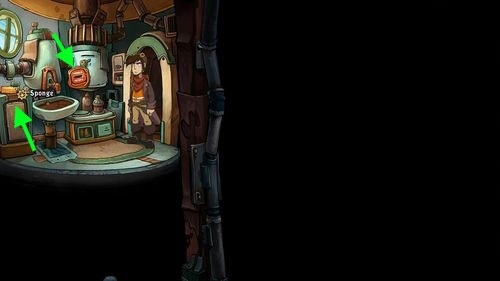 Go to the bathroom (up). Take the Sponge on the cabinet to the left and then open the Furnace. Open your inventory and combine Hook and Balloon with laughing Gas. Now place the Balloon with Hook inside the Furnace. The balloon will fly up, opening the lid which was closing the chimney. 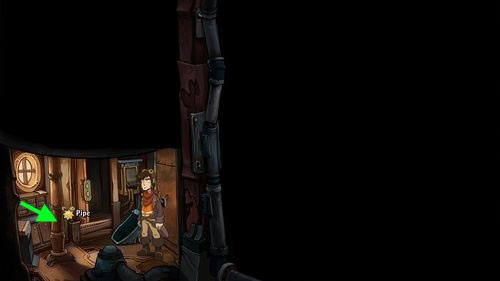 Return to Wenzel and go into the basement. Take a look at the Pipe realizing that it is placed under the shower. Use the Dentist's Drill to drill some holes. 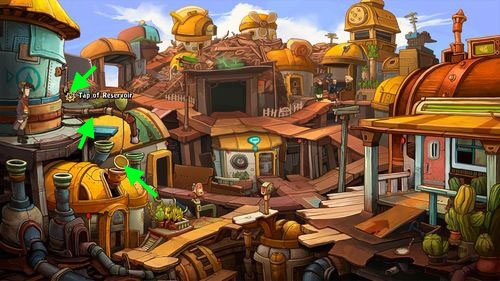 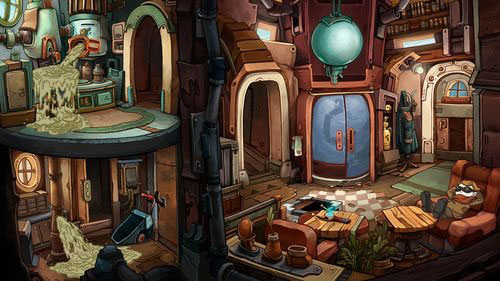 Return to the living room and then go outside. Head to the water reservoir on the left. Kick the Pipe which will circle around the tank and stop over the Wenzel's house chimney. Pull the Tap of Reservoir and watch the disaster. 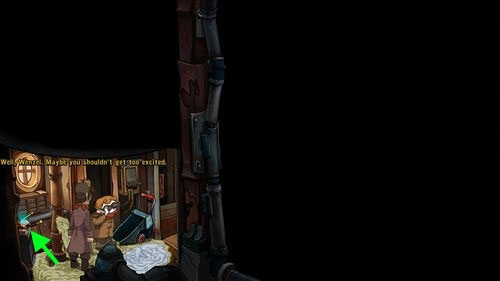 Go inside Wenzel's house. Wenzel is in the basement - Rufus will go there automatically. Unfortunately, instead of your triumph, you'll have to face another failure. There is a wheel of pure water in Wenzel's basement, which means that he will be rich now! After a while Wenzel will go to mayor to tell him about the discovery. Take the Divining Rod on the left and look at well trying to get some water, but Rufus refuses to do this. 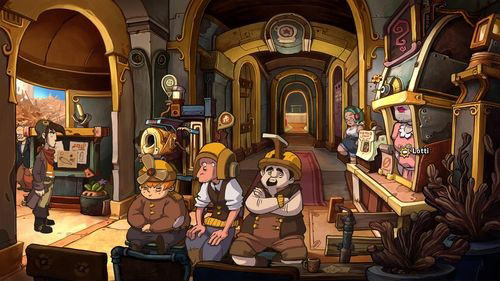 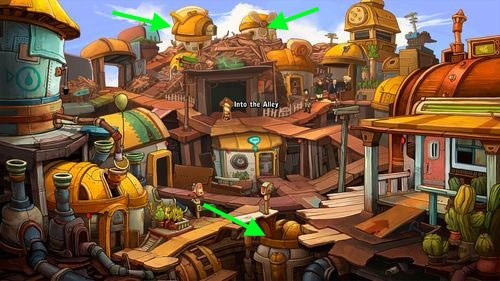 Leave the Wenzel's house and to the Town Hall. Lotti will tell you that mayor has a conversation with Wenzel right now and next people to see mayor have numbers from 63 to 65. You have to get rid of them somehow. Look at their hats (#1) - as they said, roofer has no work and started making hats. Return to the village and notice that some of houses look very similar to hats of guys in the Town Hall (#2). 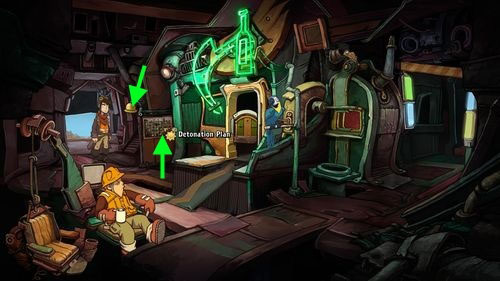 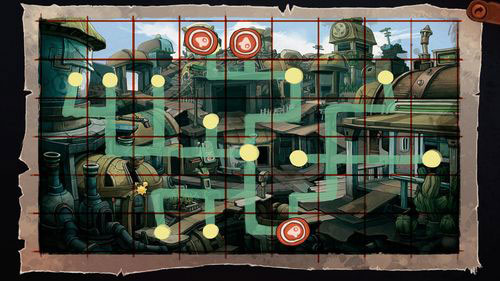 Go to the alley. I you do not remember the detonation procedure, talk to Hannek. Use Magnets on the Detonation Plan and place them as on the above screen (hats of guys in the Town Hall look like those houses with magnets on them). Close the plan and use the bell on the left to make a Blast Signal. 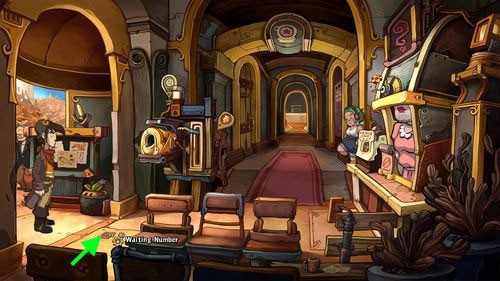 Go back to the Town Hall. If everything went according to the plan, it will be empty (guys wanted to see if the houses are OK). You can notice a Waiting Number (63) on the ground - pick it up. Wenzel will leave the mayor's office. He's sure that he's the one who will take care about Goal. During your argument Lotti will call for number 63. Go to see mayor. 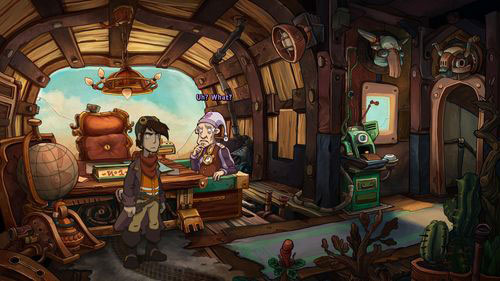 At the beginning the office is empty but after a while a drawer will be opened - mayor sleeps inside. Talk to him and you'll learn that Rufus's father was using special device to control planet's magnetic field, so he could sleep better. The only disadvantage was that post pigeons was disoriented. And it turns out that Wenzel will take care of Goal. 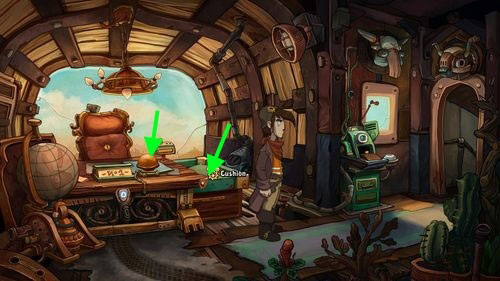 After the conversation look around the office. Hit the Bell on the desk - the drawer will appear again but this time it is empty. Pick up the Cushion in the drawer and you'll see Planet's Magnetic Field - take it. 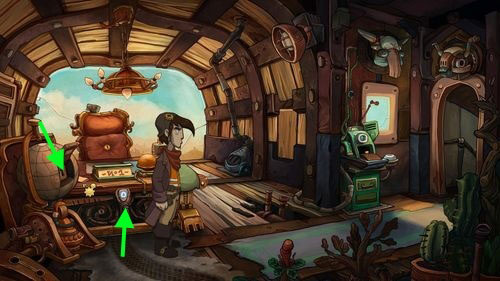 Now look closer at the Globe. There is a Glass hidden inside - take it. What's more, there is a mysterious lock inside. Notice the Water Emblem on the desk - Rufus thinks it is familiar. Take a Divining Rod and stick it into emblem. 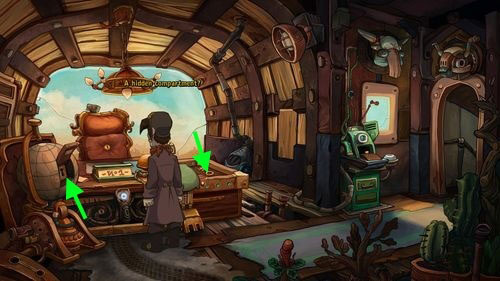 Hidden drawer will appear from the desk. Inside you'll find a Key to the Cupboard. Use Key of Booze Cabinet it on the globe's lock. 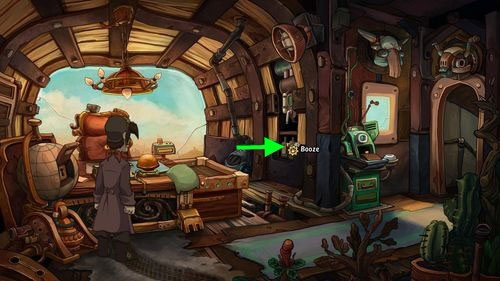 A part of wall will move aside, showing the hidden cabinet. Take a bottle of Booze out of it. 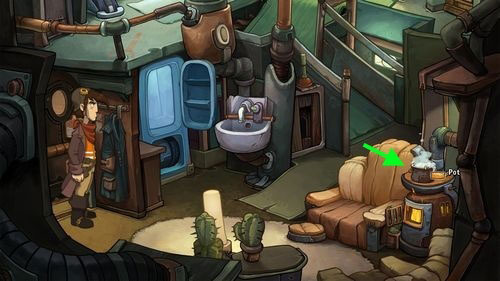 Leave the Town Hall and go to the Toni's house. Stick the Sponge into Pot with boiling water. Go up to the living area and open the First Aid Kit with Key of First Aid Kit. Take Tranquilizer from the inside. 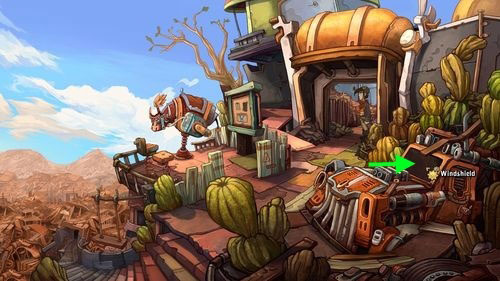 Return to the village center and go in front of the gate. Use the Wet Sponge on car's Windshield. Rufus will notice that there are many pink objects inside and there is also a pirouetting puppet. Driver's name is Sugarpuff. 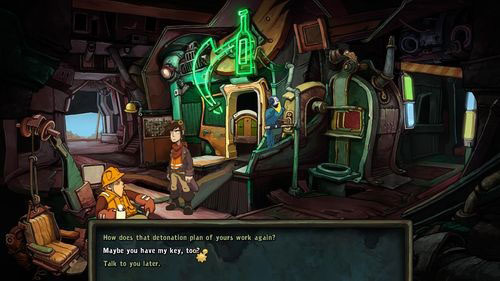 As you remember, Hannek collects car keys. So go to the Alley and talk with him about car keys. When he asks you about your name - say Sugarpuff. Your favorite color is Pink and special hobby - Ballet. After that you'll obtain Key of Truck. 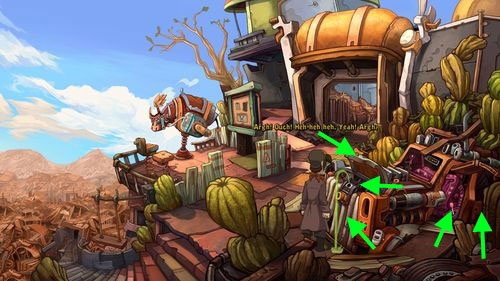 Go to the front gate of the village. Open the Truck Door with the Key of Truck obtained from Hannek. There is a Lever inside. Pull it to open the Hood. Under the hood you'll find a Battery. Use the Dentist's Drill to make a hole in it. Take some Acid into a Glass. 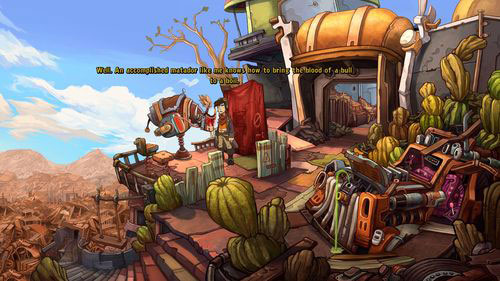 Time for a bull's blood. Problem is that the bull is not mad at all. But there is a solution. Hang the Sign (with cow) on the Bulletin Board. The bull will get interested in it, but it is not enough. So hang then Red Curtain on the Bulletin Board. The bull will get crazy so take a Syringe and use it on the Bull. Rufus will jump on the bull and will be kicked in the air after a moment, but he will get what he wants. Combine Syringe with Taurine, Glass of Energy-rich Water and Booze. As a result you'll obtain Energy-rich, revitalizing and clear Water. 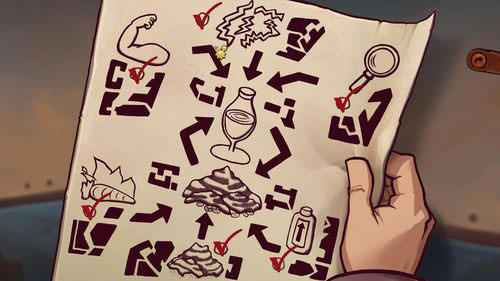 You have all ingredients needed to make an espresso.