Perks are an additional skills used by a dwarf to increase his abilities and customize the character's playing style (for a particular purpose during a mission). Perks in Deep Rock Galactic have been divided into passive and active types - the former are active at all times and the latter must be activated with the right button. Interestingly, some of the perks can have both passive and active effects. At the beginning of the game, the player can equip his character with only 1 perk of each type, but the number of perks can be increased to 3 passive and 2 active perks.

Perk Points - how can I get them quickly?

In order to get active and passive perks for your character you first need to collect a certain amount of Perk Points, that is, points for which you can buy additional skills. So far, the only way to earn Perk Points in Deep Rock Galactic is to complete missions and achieve the so-called Milestones. 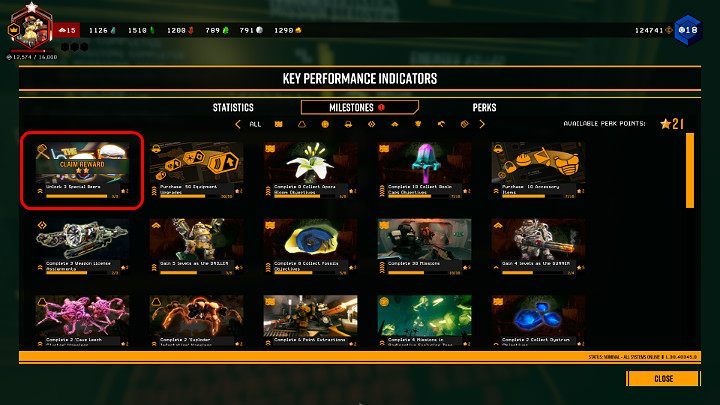 Once the player has reached a certain Milestone by completing the corresponding task, the relevant information will be displayed on the game's main screen. In other words, the game will indicate that you have received Perk Points as a reward. To collect Perk Points, activate the Key Performance Indicators terminal, which is available in the character's private quarters, and click "Claim Reward". Perk Points can be obtained, among others, for the following activities:

Perks - how to distribute them?

Once you have earned the Perk Points, you can go to the appropriate tab in the Key Performance Indicators terminal and select which Perks you want to unlock. Before distributing Perk Points, it is worth considering which perk will actually be needed by a particular character, as once a specific skill has been selected, it is impossible to undo your decision. 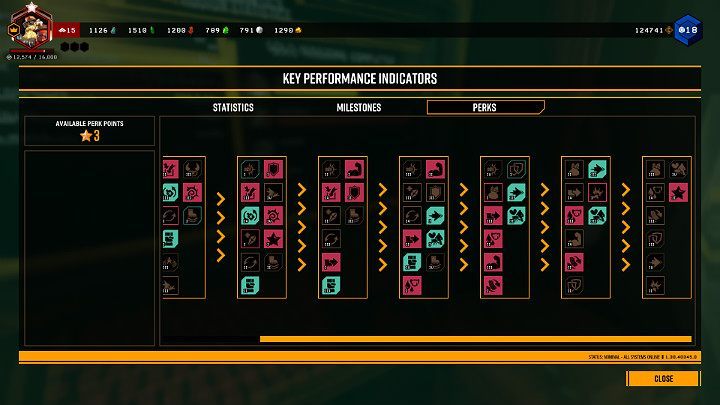 The perks have been divided into several separate columns, which can be accessed after unlocking the right amount of skills. The first columns require only 3 or 4 perks to be unlocked, but to advance to the next ones you have to unlock as many as 5 skills per column. Also, it is worth remembering that some perks are divided into levels and occur in several columns. To unlock the highest level of a particular perk you will need to unlock all of its levels one at a time.

First of all, focus on acquiring the most important Perks for your character. You will be able to unlock the rest of the skills later.

How to increase the number of perks

At the very beginning of the game, each character in Deep Rock Galactic can be equipped with just one passive and one active Perk. It's really not much and you are forced to decide which of the skills will be most suitable for your character. Fortunately, the number of perks can be increased to 3 passive and 2 active perks. 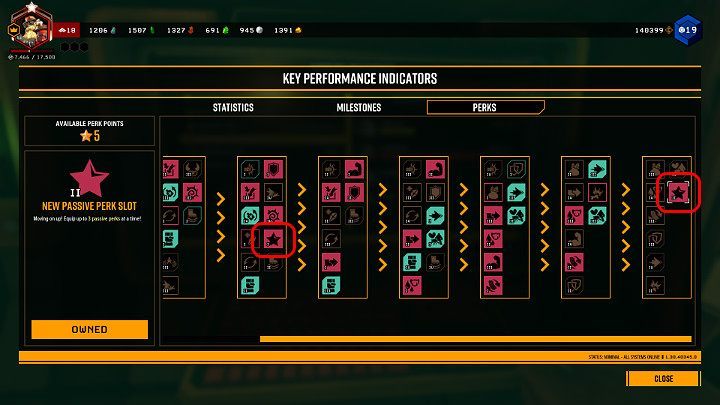 On the skill board in 4th and 5th columns you can find a Perk called "New Passive Perk Slot". The first one costs 15 Perk Points and the second as much as 20 perk Points so you will have to save points to unlock more slots for passive character skills.

In order to unlock an additional active Perk slot, you will have to level up your character. For more information about character advancement and leveling up, please refer to another chapter of this guide, which is entirely devoted to this topic.

It's worth to unlock additional Perk slots as early as possible in order to have access to useful passive and active skills, which will make the game much easier.

Perks - how to use them?

After unlocking the first perks, you will be able to assign them to your character. Perks can be selected at the equipment terminal, which is located on the first level of the space rig. It's right next to the mission terminal. 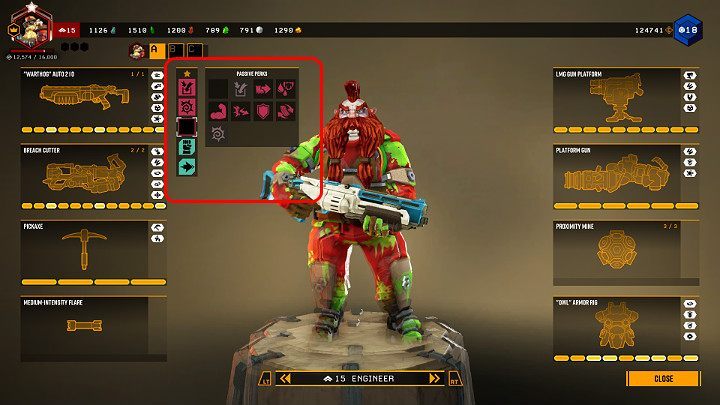 After the terminal gets activated, you will see a screen with the character's equipment. Perk slots are located in the marked area indicated in the above picture. The first 3 from the top are pink and these are Passive Perks. Below them you can find two Perks that have a turquoise color.

Perks can be changed freely and you don't have to pay extra for this action so it's worth remembering that you can customize your character for a specific mission.