This chapter of the Deep Rock Galactic guide contains all relevant information about APD-B317 drone called Bosco and recommended modifications which will make him a very useful companion.

APD-B317 is a multi-purpose drone nicknamed Bosco that accompanies the player during each solo mission, as well as while awaiting more players in multiplayer games. For such a small drone, Bosco is extremely useful in every possible situation because it offers a lot of functionalities! 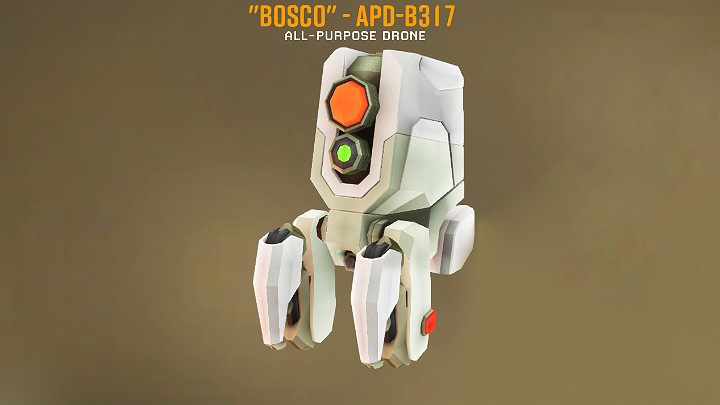 Bosco was programmed to comply with all commands given to him by the miners. During the initial hours with Deep Rock Galactic, controlling Bosco may seem to be a little complicated, but after a while, you will send orders easily. This section of the guide will tell you how to effectively control Bosco, how to apply modifications, and how to use his skills properly.

How to control Bosco

During gameplay, the player has full control of Bosco multipurpose drone and can control it with a laser pointer, which is also used for many different things. Bosco can also make his own decisions and that is usually the case when he spots an opponent - he immediately moves to attack. 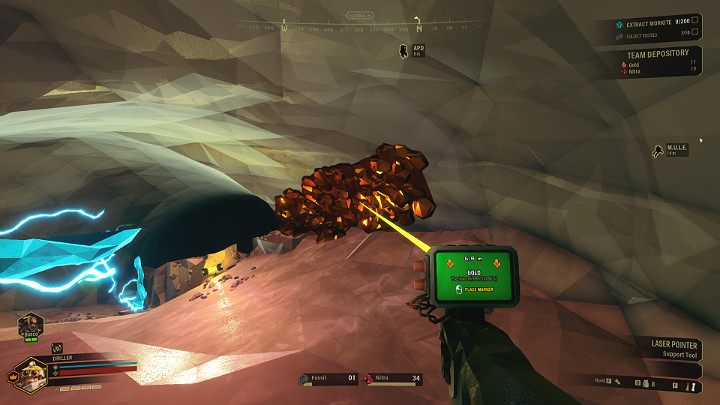 Although Bosco himself sometimes decides what he wants to do, any command given to him by the player cancels the previous one and is immediately executed. Depending on the platform (PC, Xbox One), the appropriate keys and buttons, or combinations thereof, are used to control Bosco.

How to control Bosco on PC

How to control Bosco on Xbox One

Bosco is an extremely versatile drone that not only keeps the miner company, but can extract resources, illuminate dark corridors, carry heavy objects, revive fallen players, and is also a capable fighter. Playing solo mode in Deep Rock Galactic without Bosco would be terribly cumbersome!

One of the main tasks of Bosco multi-role drone in the Deep Rock Galactic is to assist miners in extracting resources. Bosco greatly accelerates the entire process of collecting minerals, as it is able to dig faster than the miner, which greatly reduces time needed to complete the action. 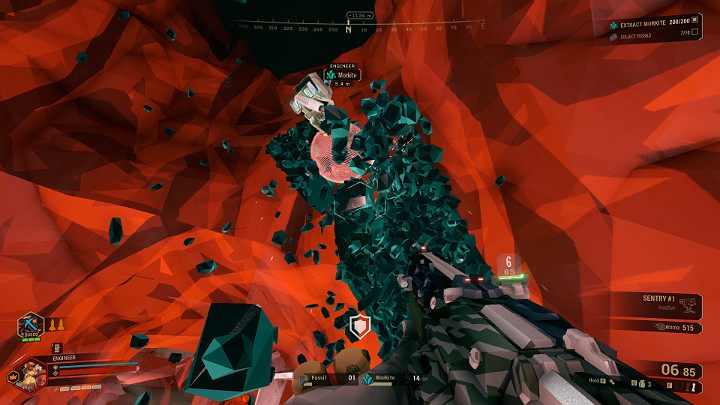 If you want to order Bosco to mine resources, just use the laser pointer and press the right button - LMB on PC and RT on Xbox One. Bosco immediately understands the message and goes to work, with a pickaxe sign appearing on his icon.

the raw materials extracted by Bosco appear next to him and are not stored automatically, so they must be collected by the player and deposited into the M. U. L. E. robot. 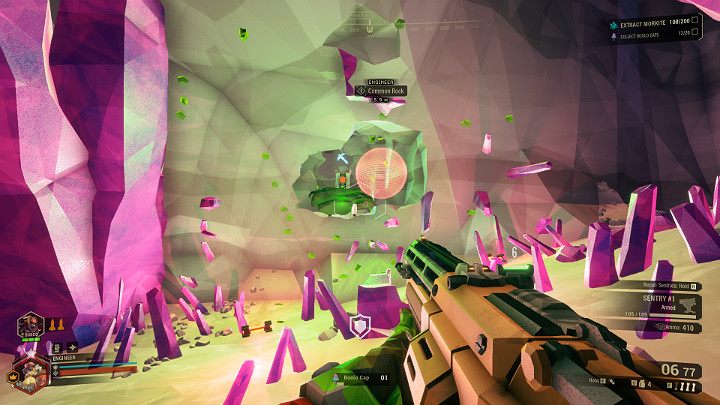 Bosco is also able to carry large objects such as Bittergem, Compressed Gold, Enor Pearl, or Jadiz, as well as additional items such as Alien Egg, Aquarq, or mysterious items such as ERR://23¤Y%/. Each of these items must be taken from Bosco and placed in the deposit.

if Bosco doesn't want to descend with a particular resource or object, you can order him to abort the action by pressing the appropriate button which will summon the robot to yourself (by default, X on the keyboard). The item will be immediately dropped to the ground, making it easy to pick it up and store.

APD-B317, known as Bosco, is also suited to combat against aliens. As soon as Bosco notices the enemy, he immediately makes a warning sound and starts attacking with an automatic cannon. Interestingly, Bosco always tries to hit the opponent's sensitive points so that he causes as much damage as possible. 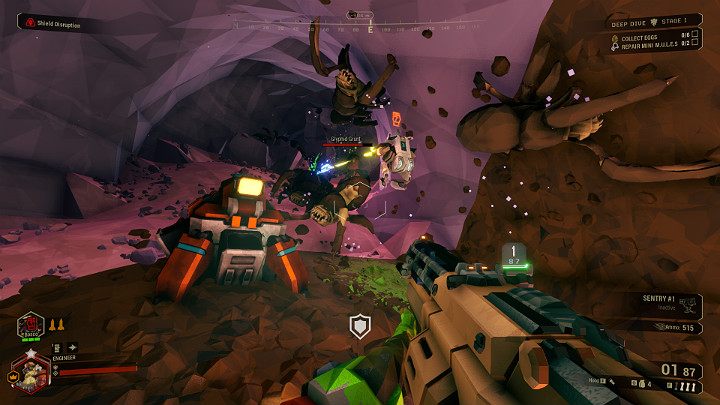 With his automatic cannon, Bosco causes quite a lot of damage, especially at lower difficulty levels, and is able to handle even a medium-sized opponent on his own. After applying a certain modification (Rockets), Bosco can also fire rockets and cause area of effect damage.

if you want Bosco to attack a particular opponent, you'll have to use a laser pointer on him. Otherwise, Bosco will choose his own targets.

Bosco can also illuminate dark caves. During gameplay, you won't use this feature often, but it is worth knowing that if you run out of flares, you can use this skill to light the way to the evacuation vehicle or light a mining spot. 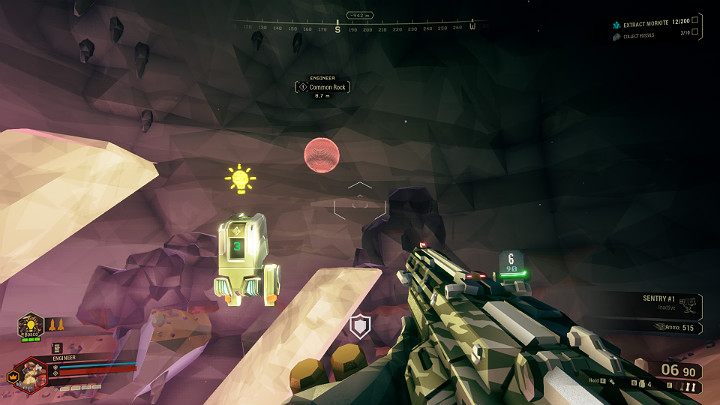 The procedure for illuminating a given point inside a cave is very similar to that of extracting resources. Simply use a laser pointer and click on any point on the wall or vault of the cave (on PC - LMB), and Bosco will perform the action.

The final feature of Bosco is the ability to revive a fallen player character. This skill is extremely useful when playing at higher difficulty levels or when completing complex missions in Deep Dives (endgame). 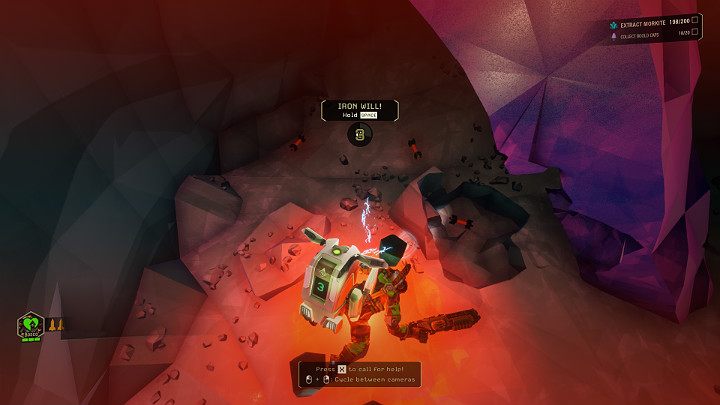 Once the player is knocked down, Bosco stops every action being performed and rushes to help. But if for some reason, the drone stops and fails to revive the player, you can yell at it (default X on the keyboard). The revival takes a short while and the player returns to battle with a certain amount of health points. A number displayed on Bosco's back tells the player how many times he or she can use the revival ability.

to revive the player character, Bosco uses electric shocks that scare away nearby opponents so the player has a moment to gather his bearings.

Bosco can be modified in the same way as the other equipment available in Deep Rock Galactic. The same resources are used to upgrade the APD-B317 drone as for improving weapons and other combat equipment, so credits and additional resources will be needed, including Enor Pearl, Bismor, Jadiz, etc. 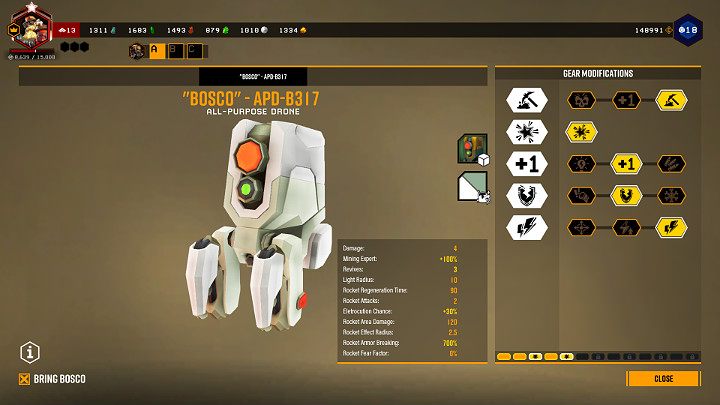 Bosco's modifications are divided into 5 tiers and unlocked at a certain character level. We recommend unlocking following skills for Bosco:

these modifications will make Bosco a perfect companion for every miner who has to fight against alien swarms. Bosco will be able to quickly extract resources, fire rockets, destroy opponents' armor, and will also have a chance of incapacitating his target. Moreover, during tough battles, you can always benefit from Bosco's reviving ability.