As soon as the cocoon is broken, Dreadnought will get out and launch a deadly attack immediately. In addition to the usual attack for which Dreadnought uses his massive jaws, this huge monster can charge at the dwarves with enormous speed. What's more, this enemy can spit fireballs, as well as pheromones that create smaller aliens or cover the target they hit with pheromones to lure the smaller enemies towards a dwarf. Dreadnought also has an area of effect skill and if he gets angry he can cause lava spikes to explode over a large area. If the team hides in a place where the Dreadnought cannot reach them, the opponent will likely crack rocks to get to them. 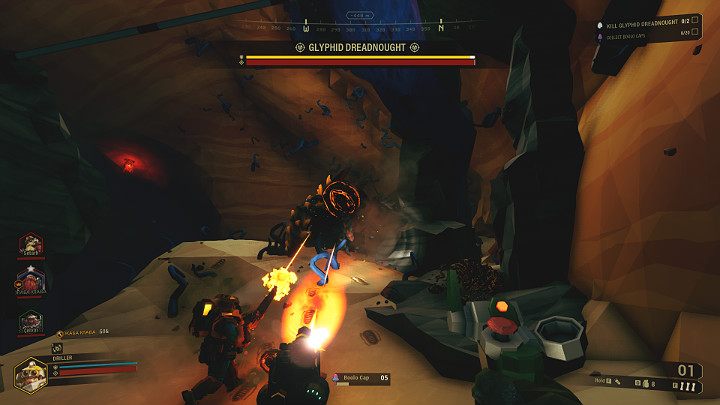 Dreadnought is a heavily armored opponent and therefore possesses a unique health bar. In addition to the normal health bar (marked in red), this terrifying alien also has additional armor (yellow bar). The entire front of this opponent is covered with armor that cannot be penetrated by weapons, and the only weak point of the Dreadnought (to reduce his yellow armor bar) is his back. First of all, attack the creature's abdomens to break the armor, then continue the attack to inflict real damage. Once the armor is destroyed, players can shoot at the opponent's mouth, but will cause much less damage.

Before you start fighting Dreadnought, try to prepare the area properly. Make a lot of space, set up guard turrets, platforms and zip lines, and make sure you have the right lighting. Also, set up explosive charges just before the cocoon to detonate them when the enemy hatches from the cocoon.

Note! Dreadnought is extremely resistant to damage from fire and electricity so try to use other weapons in combat against this opponent.

The number of Dreadnoughts to be eliminated varies depending on the length of the mission and its difficulty, namely: