From this chapter of our guide you can find out what types of missions are available in Deep Rock Galactic.

Missions are actually the main form of gameplay in Deep Rock Galactic. All missions are accessible from the mission select terminal, which is located in the main part of the space station, right in the middle, so you can't miss it. Once the terminal is activated, player has to choose the planetary region and then the type of mission he or she wants to complete. 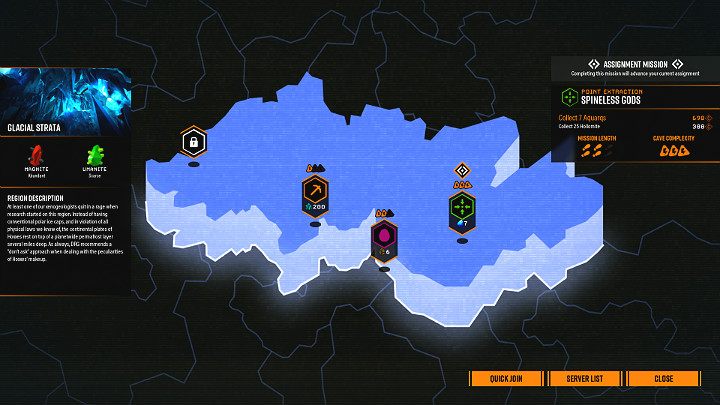 Missions marked with the padlock symbol are temporarily unavailable and must be unlocked by performing subsequent tasks. Each of the available missions was appropriately flagged and described in terms of duration and level of difficulty. For completing a mission you will receive experience points and credits. Furthermore, all raw materials collected during the mission are deposited into the player's pocket once the mission was completed and can be used to upgrade items or weapons.

Access to all the missions in Deep Rock Galactic can be unlocked by completing a number of special tasks called Assignment Missions.