Like every class available in Deep Rock Galactic, Scout has access to three throwing items. The primary throwing item is the Inhibitor-Field Generator, which is a static field generator that can severely slow and weaken the enemy. At level 5, Scout can unlock Cryo Grenade, and at level 10, Pheromone Canister.

The Inhibitor-Field Generator is the primary tool available in Scout's equipment. The characteristic feature of this tool is that it attaches to every surface. After a short moment, it will emit a static field, which can severely slow and weaken any opponent that comes within its range. The affected enemy will receive increased damage by as much as 30%. The effect of Inhibitor-Field Generator lasts for 20 seconds. 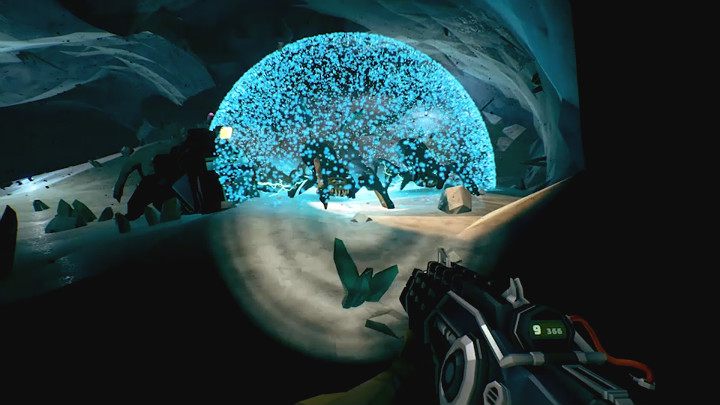 The disadvantage of this gadget is that it does not inflict direct damage, and is only useful for controlling the behavior of opponents. What's more, the Inhibitor-Field Generator is only effective on targets within its range, so Mactera-type aliens can hover freely over it.

Cryo Grenade creates an icy explosion in a certain area that can immediately freeze the targets that were hit. Frozen targets will receive up to three times as much damage. Also, such opponents will not be able to perform any activity until they defrost.

When using Cryo Grenade, keep in mind that smaller enemies are more susceptible to freezing and this effect lasts much longer. Larger enemies like Pretorians and Dreadnoughts will defrost at a much slower rate.

Pheromone Canister is a very clever biological weapon that causes the creatures which inhabit Hoxxes to begin attacking each other. The Pheromone Canister sprays pheromones over a very large area. The effect lasts for 10 seconds.

Pheromone Canister is especially useful when the player character is surrounded by a swarm of aliens. Detonating a single charge of pheromones will allow the player to get some time, reload his weapon, and take a convenient shooting position out of enemy range.{/ramkazielona}