In this chapter of our Deep Rock Galactic game guide you will find all unique attributes of Scout character class, including a detailed description of his equipment along with recommended modifications, suggested perks and tips that may be useful during gameplay.

Scout is one of the characters available in Deep Rock Galactic. Scout's primary objective is to illuminate underground complexes and extract hard-to-reach raw materials. Scout's main weapon is the Deepcore GK2 machine gun that can be used to quickly eliminate single targets. 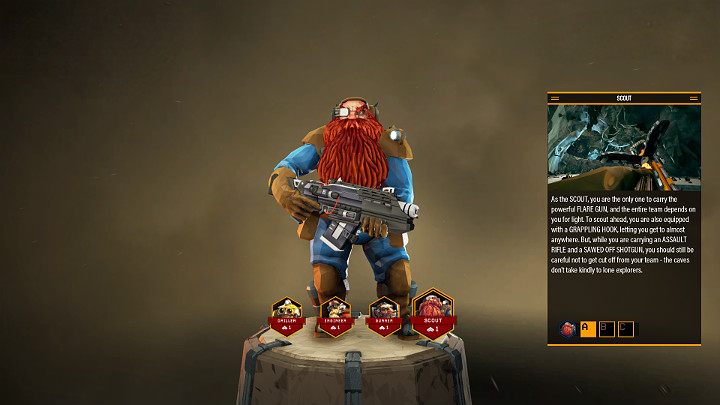 Scout's auxiliary weapon is the Jury-Rigged Boomstick, which is a handy two-barrel shotgun. Scout also has two special gadgets such as Grappling Gun and Flare Gun. The first one allows the Scout to get into hard-to-reach areas, and the latter one provides excellent visibility for the entire team. Scout also has some interesting throwing items that will make it much easier for him to survive in unfavorable conditions inside the caves.

Deep Rock Galactic has a lot of perks - the player can equip their dwarf with them to further adjust their play style. Below we present recommended perks for Scout character class: