Like every class available in the Deep Rock Galactic, Gunner has access to three throwing items. The primary throwing item is a Sticky Grenade - a grenade that is capable of attaching itself to any ground or even the body of the opponent. At level 5, Gunner can unlock the Incendiary Grenade, and at level 10 the Cluster Grenade.

The Sticky Grenade is a basic grenade available in Gunner's equipment. The unique feature of this grenade is that it attaches to any surface or opponent before it explodes. When it comes to injuries, Sticky Grenade is slightly weaker than its competitors, but the Gunner can carry as many as six of those. 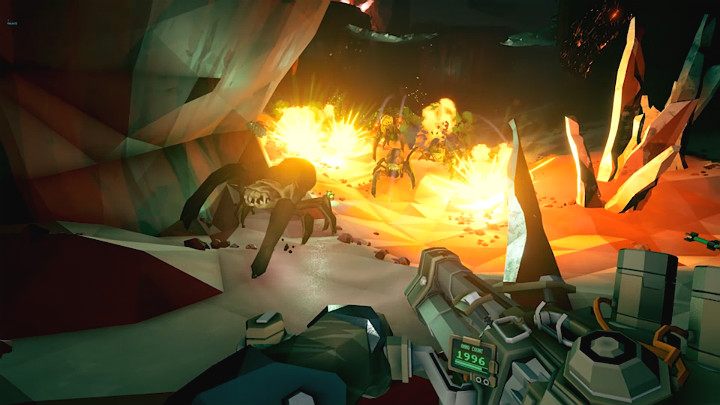 It should also be noted that Sticky Grenade causes fear status among enemies. This means that if you attach it to your opponent it will start running and scaring the other enemies. The effect of fear will intensify when the explosion occurs

An Incendiary Grenade is an area of effect explosive grenade that does not cause direct damage, but covers a particular area of terrain with a circle of fire that lasts for 8 seconds. The flames created by the incendiary grenade behave similar to the "sticky flames" fired by the Driller's flamethrower and adhere to the ground to severely injure enemies.

Incendiary Grenade will only explode if it touches the floor. This means it can be bounced off walls and ceilings to change its flight trajectory.

Cluster Grenade behaves like a cluster missile because it produces as many as 9 minor explosions in the series. Due to the unpredictable blast effect, using a Cluster Grenade will require a lot of practice.

Due to the unpredictable nature of cluster grenades, they should be used with special care. By detonating one grenade in a cramped room, you can condemn the entire team to death and fail the mission.