The main primary weapon of the Gunner is the Lead Storm Powered Minigun. However, at level 10, he also receives access to an alternative main weapon, the Thunderhead Heavy Autocannon. The first of these weapons belongs to the heavy machine gun category, which inflicts enormous amount of damage in a very short time. The Thunderhead Heavy Autocannon is a handheld automatic cannon that fires high-caliber explosive projectiles.

The Lead Storm Powered Minigun is the main Gunner weapon, which has an extremely high rate of fire (up to 30 rounds per second in the basic version!), a huge ammunition supply (2,400 rounds) and a very high rate of DPS (damage per second). Another advantage of this weapon is that it does not have to be reloaded! It should also be mentioned that any projectile fired from a minigun has a 30% chance to stun the target. The Lead Storm Powered Minigun is an effective weapon at any distance and against any possible opponent, even in combat with the Praetorians. 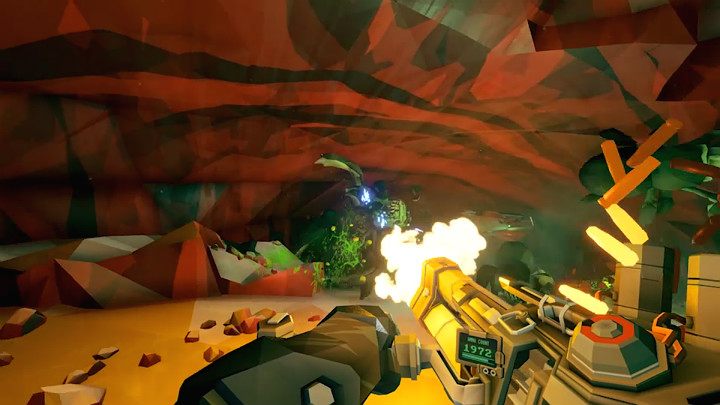 The Lead Storm Powered Minigun needs a moment to warm up before firing and has a unique feature that makes the weapon much more accurate when firing long series of bullets. When you fire the right amount of bullets, the minigun will stabilize its recoil and the weapon can become almost like a laser beam.

{czerwonaramka}While using the Lead Storm Powered Minigun, special attention should be given to overheating of the mechanism when shooting very long series. The first sign of overheating is the distinctive sound and smoke. If the meter on top of the gun reaches its maximum, the minigun will stop firing and needs as much as 10 seconds to cool down.{/ramkaczerwona}

After advancing to level 10, Gunner can unlock an alternative main weapon, which is a Thunderhead Heavy Autocannon. This manual automatic cannon fires explosive projectiles that inflict direct damage upon hitting a target and additional damage from an explosion in a small area. Unfortunately, it takes lots of time to reload the Thunderhead Heavy Autocannon - 5 seconds.

Thunderhead Heavy Autocannon shoots a little slower at first, but over time it starts shooting at a higher speed. Moreover, the projectiles fired from this cannon are perfect for destroying the armor of opponents.