Like every class available in Deep Rock Galactic, the Driller has access to three throwing items. The first one is the small double-edged Impact Axe. After gaining level 5, the Driller can unlock a High Explosive Grenade and level 10 unlocks Neurotoxin Grenade.

The Impact Axe inflicts massive damage upon hitting a target. In addition to physical injuries, Impact Axe creates an explosion of static energy in a small area that increases direct damage to 240 points - one of the highest values in the entire game. 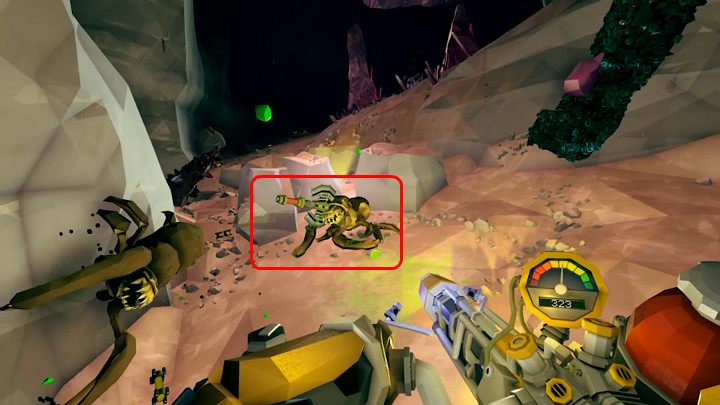 The Driller can carry up to eight axes, and those that missed the target can be picked up and used again. In the image above, you can see an axe stuck in an opponent but they can also get stuck in a cave wall or in the ground. You can pick them up and use again.

The Impact Axe is an extremely effective weapon against Glyphid Praetorian opponents. This alien species has a sensitive spot on its back that emits yellowish light. If you hit that spot, you'll deal an enormous amount of damage. What's more, throw the Impact Axe into the monster's mouth to stop it from spraying the poison.

A High Explosive Grenade is a traditional grenade that causes significant damage in a specific area. It causes panic among opponents and is capable of destroying armor upon hit.

Neurotoxin Grenade doesn't cause direct damage, but creates a cloud of poisonous gas that injures all aliens who come within its range. It is worth noting here that the gas can be ignited to cause an explosion.