This chapter of the Deep Rock Galactic guide focuses on Driller. You will find a detailed description of his equipment along with recommended modifications, suggested perks and tips that may be useful during gameplay.

Driller is one of the characters featured in Deep Rock Galactic. Driller's primary task is to break through cave walls and pave the way for the team using Reinforced Power Drills. Driller's main weapon is the short-range CRSP Flamethrower which can inflict massive damage and quickly eliminate an entire swarm of aliens. 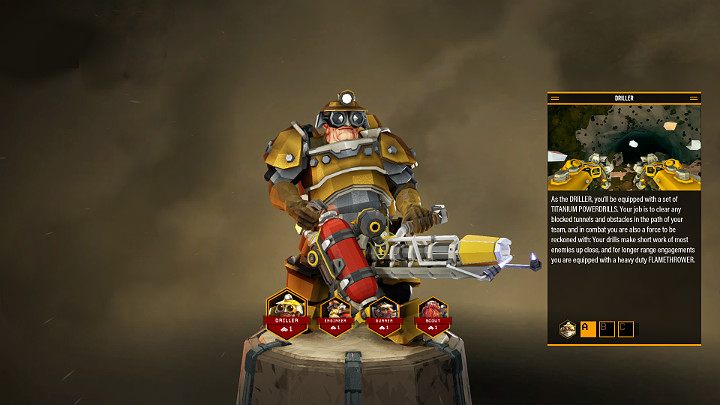 The driller's secondary weapon is the Subata 120 hand pistol, which is useful for fighting weaker opponents or for shooting from a distance. As every self-respecting miner, the Driller can use powerful Satchel Charge explosives and extra weapons such as Impact Axe or grenades.

Deep Rock Galactic has a lot of perks - the player can equip their dwarf with them to further adjust their play style. We suggest the following perks for Driller: