Below are the official minimum and recommended Deep Rock Galactic system requirements for PC. The game runs on Unreal Engine 4, so weaker machines may have trouble generating the best quality graphics with realistic lighting and shadows. However, Deep Rock Galactic played on minimum settings can still give you a lot of fun.

The various graphics options available in Deep Rock Galactic allows you to find a balance between the quality of the graphics and the gameplay smoothness - this is especially true for weaker computers with older graphics cards. Those who have more powerful PCs will have no problems with the game's framerate, but they can always improve its quality and readability. Below is a list of graphic options available in Deep Rock Galactic along with an explanation of what they are for and whether they can be turned off or modified. 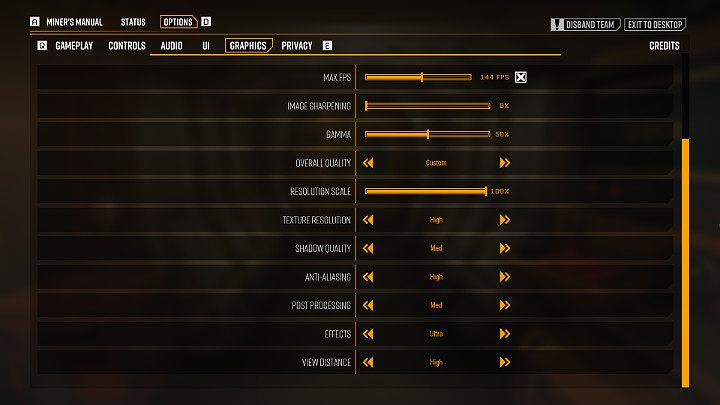 Even before its official release, Deep Rock Galactic has attracted a lot of interest from players either through Steam Early Access or the demo version from the Microsoft Store. Unfortunately, many PC gamers had already complained about Windows crashes or frame drops happening even on stronger hardware. This, however, can be easily fixed!

Updating the graphics drivers is the first step in fixing the Windows crashes. Depending on your hardware, run GeForce Experience or go to the AMD website and see if you have the newest drivers. If not, download and install them.

Some popular programs for monitoring or overclocking the graphics card, such as MSI Afterburner, GIGABYTE Easy Tune, EVGA PrecisionX, AMD Overdrive, or RivaTuner Statistic Server can cause problems in Deep Rock Galactic. Turn off additional programs and see if the problem is still present.