On this page of our guide to Deathloop you'll find a walkthrough of the Visionary Lead / mission - What Wenijes Want. The walkthrough informs you e.g. how to find clues in Wenije's quarters, how to reach 2-BIT, how to obtain Aleksis' voice sample, how to move a figurine of Aleksis from the safe, and how to get Wenije to come to Upadaam. 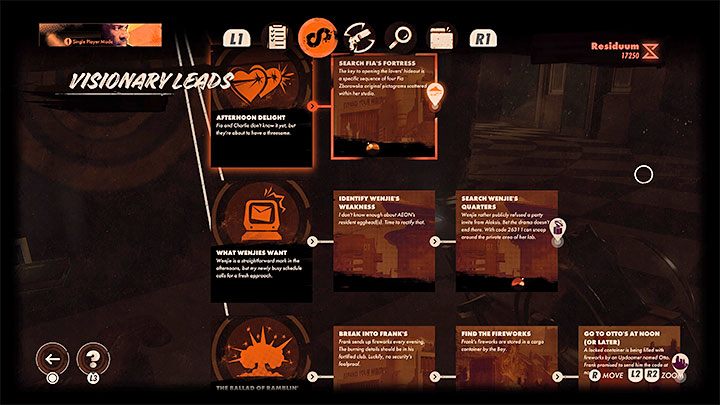 This mission should appear in your journal after completing the Space Invader mission, described on a separate page of the walkthrough. Once Colt's schedule changes, he'll have to devise a new plan to murder Dr. Wenije Evans. If you want to get through the campaign, you won't be able to use the already known method of dispatching all Wenije copies in the Visionary's lab. 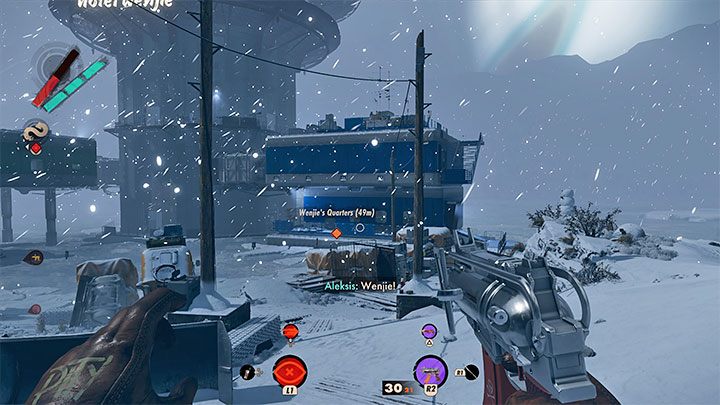 Thanks to finishing the Space Invader lead, that is - opening the safe and finding the journal (Aesthetics Are Key) you've learned a combination (In our case it was 2631, but you should know some combinations are randomised). Colt will be able to use it to obtain new leads on Dr. Wenjie.

You need to reach the Complex district during the afternoon. Wenjie's quarters are inside the blue building shown on the picture above, neighboring the huge lab you've already visited before. 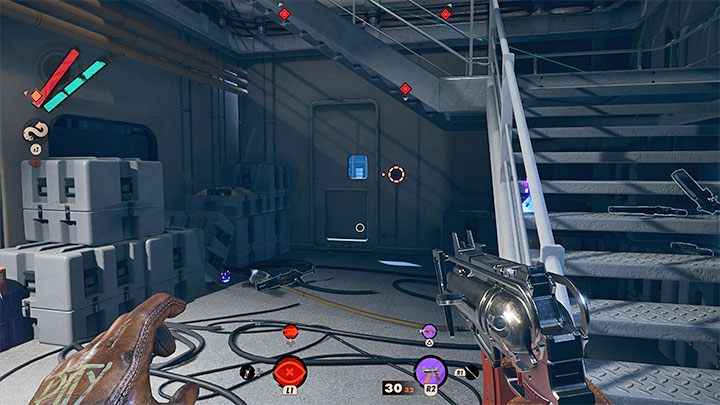 You should expect encountering at least one Wenije copy in this location. Additionally, be ready to hack sensors and turrets to avoid causing an alarm and having to get into a fight.

A closed door leads to an inaccessible area of the quarters. 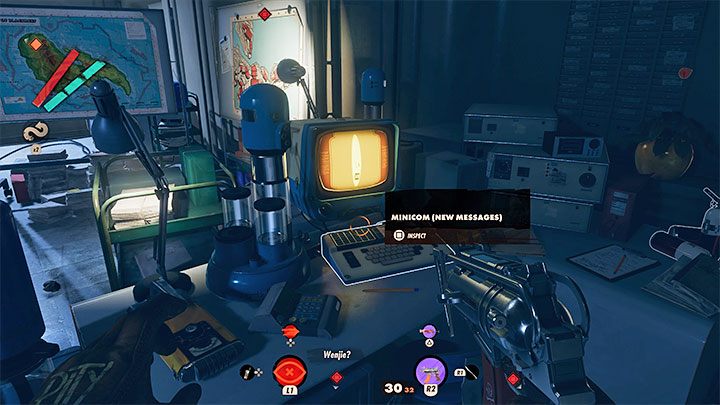 While exploring, you should examine:

While searching the quarters you'll learn about Wenije's plans, and about a possibility of luring her into Upadaam during evening hours. 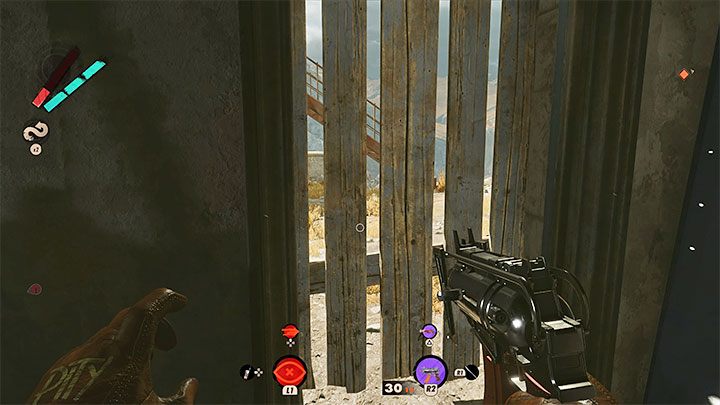 Go back to the tunnels, wait for the next day to come and head to Upadaam - choose midday as the time.

You'll need to infiltrate the castle housing Charlie's hideout once again. As a reminder, you need to reach it through the bridge. The entrance to the courtyard is closed, but you can get there by using Shift or go through the side building and destroy some planks. 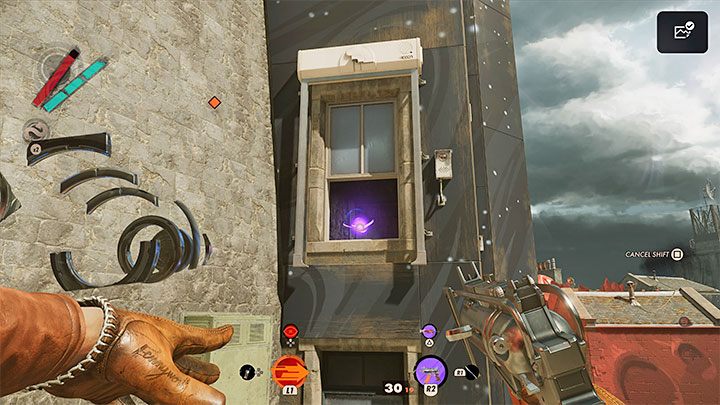 Your journey through the castle is similar to the one during the Space Invader mission, so you can enter combat, look for stealth opportunities, alternate paths (such as teleporting to shutters or onto far-away parts of the roof) or avoid enemies. Personally, we recommend you to dispatch everyone in the castle. You'll see why in the later part of the mission. 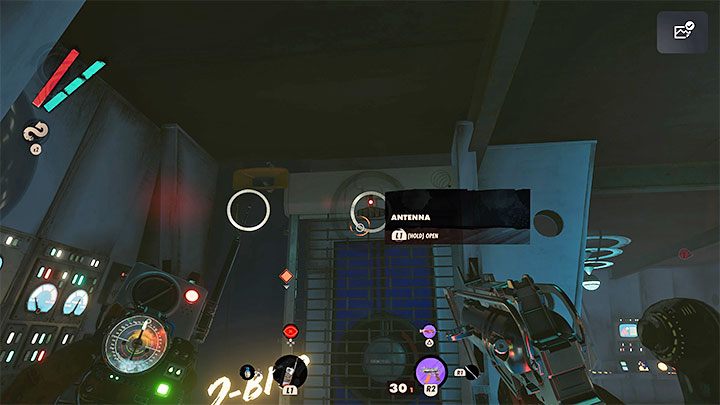 The room housing 2-BIT can be found on one of the upper levels of the castle. Hack the antenna to open the door.

Once inside, you can talk to the intelligent machine. You'll find out you need a recording of Aleksis' voice.

Find a recording of Aleksis 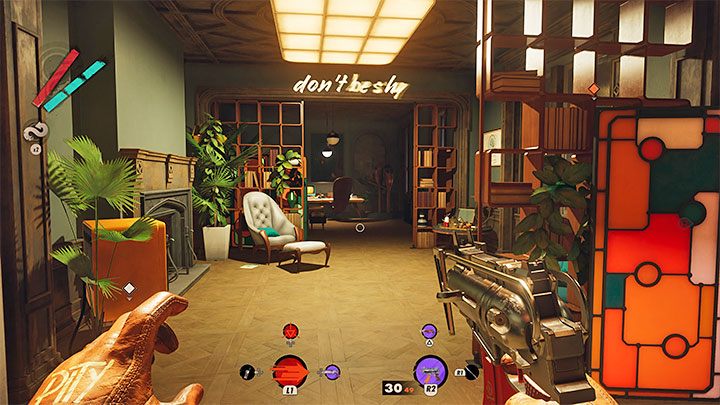 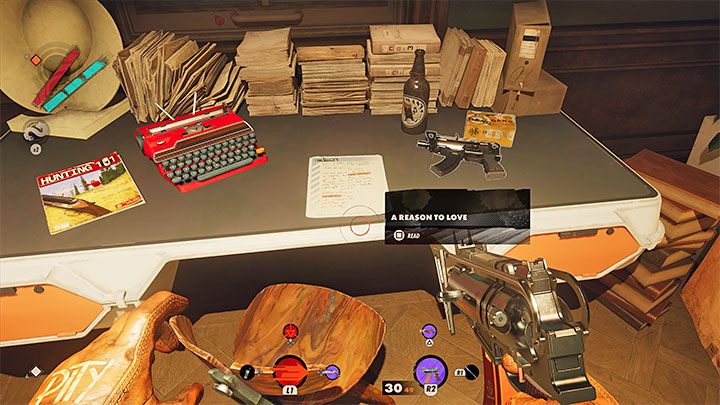 Go to the Castle in the Upadaam district - its exploration is described in detail on the page regarding the Devouring Sheep lead.

You must reach the upper floors of the castle, the rooms where a costume ball will take place during a evening. Start exploring the top floor. Here, you'll find a note (A Reason to Love), thanks to which you'll learn Julianna's planning to deliver a safe to the library. You'll also learn the combination to the safe (in our case it was 5166, but it could be different in your playthrough).

Retrieve the recording from the Library 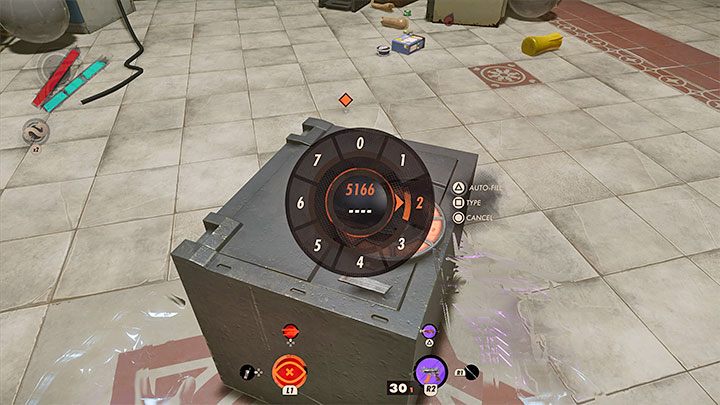 The library is also located in the Upadaam district, and should be examined during the midday.

You shouldn't encounter any enemies in the library. The safe is located on the ground floor, in the library's center. Input the recently acquired combination. 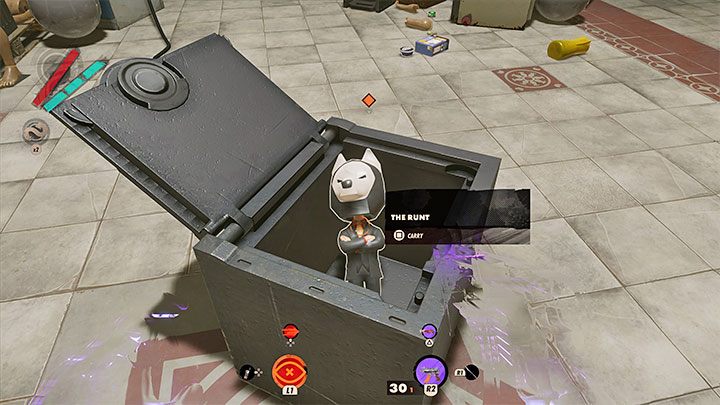 Inside the safe you'll find a talking Aleksis figurine (The Runt) you need to carry to Charlie's castle, to the room 2-BIT is in. 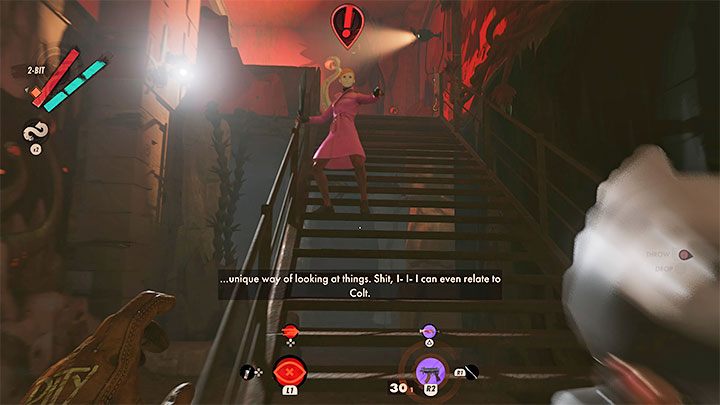 While carrying to machine you need to deal with two additional handicaps:

Each time you get close to enemies, put the figurine on the ground before dealing with them. You can also look for alternate paths.

If, as we suggested earlier, you've killed all the enemies in Charlie's hideout the journey should be much easier. Inside the castle you should watch out for proximity mines, which are often attached to the walls. Take your time and destroy the mines from a safe distance by shooting them. 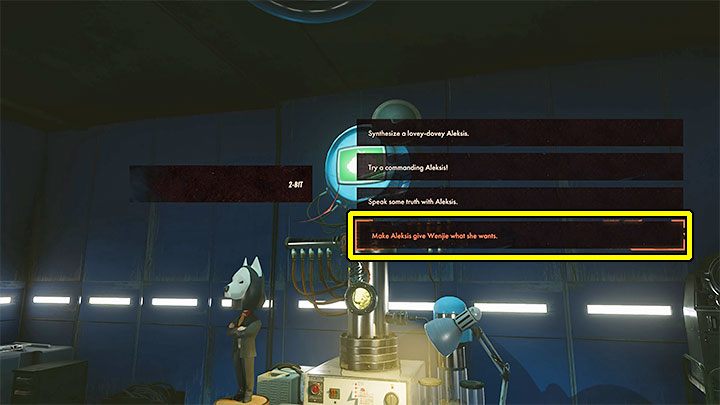 When you reach 2-BIT interact with the machine to insert the figurine into it and upload the voice sample. Select the last option on the list, which is Making Aleksis give Wenije what she wants. 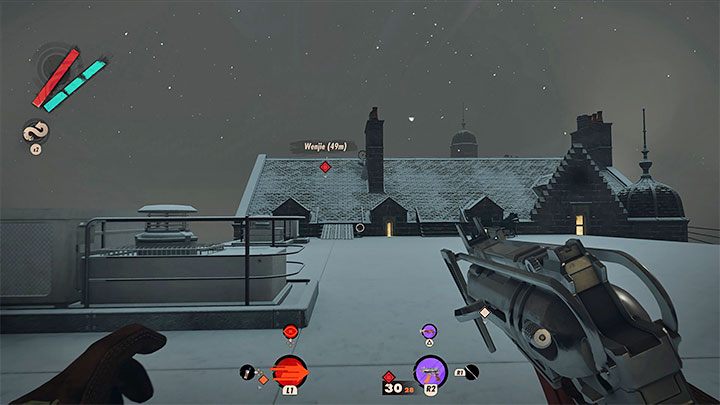 The mission ends once 2-BIT sends the recording. Thanks to your efforts, Wenjie can now appear in Upadaam during the evening, in the same location:

Wenjie can be found on the castle ground - just like with other Visionaries, it's a good idea to infiltrate this location by choosing the path near the cliff. Then use Shift to reach the castle rooftops. 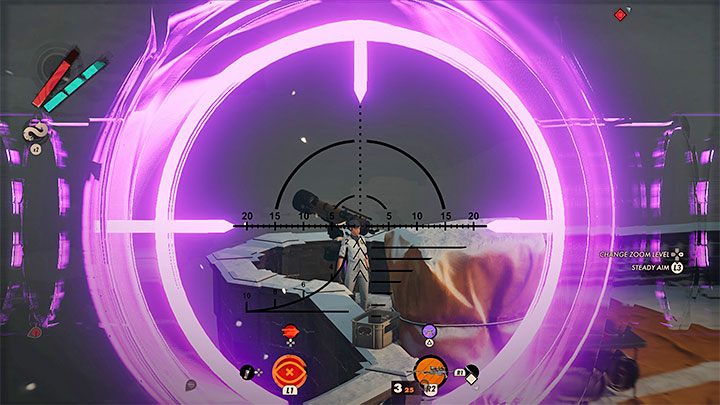 Wenjie is on the upper walls of the castle, accompanied by a group of regular enemies. She can be easily eliminated via a sniper rifle headshot (warning - just one shot may not be enough), but you can also try to push her off the wall with Karnesis, or throw grenades all over the walls and engage in direct combat.