On this page of our guide to Deathloop we've listed all of the missions you can finish while playing through the campaign. We'll inform you about the available missions, their types, the campaign's endings and various things regarding the quests. 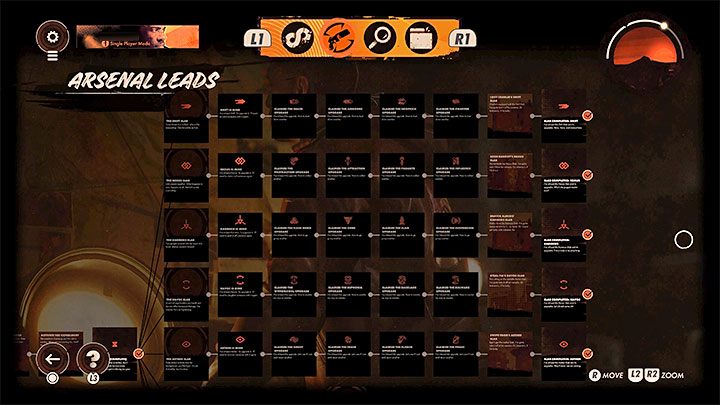 Quests in Deathloop are called leads, but despite the unusual name they shouldn't really surprise you with anything. The missions available are linear, but you can choose the order of completing them throughout most of the campaign. The game also doesn't force you to fully complete a quest in one go. You can stop a quest whenever you want and return to it when you feel like it.

The quests can be divided into two main categories. Visionary Leads are the equivalent of main quests. Each of them focuses on one or several Visionaries, the main antagonists of Deathloop. You can acquire knowledge about the Visionaries, influence their plans during the day and, of course, eliminate them. After completing all Visionary Leads, you'll unlock the final quest in the game - Ending It. You don't have to deliberately postpone it for later, the game allows you to keep playing even after finishing the main story.

The Arsenal Leads (aside for the important Ubiquity mission revolving around Residuum) are the equivalent of sidequests. By finishing them you can obtain new powers and unique firearms.

Deathloop has several different endings, we've described on a separate page of the walkthrough, but you can only choose your ending at the very end of the campaign. The previous quests don't feature any important decisions.

Some of the mission objectives can be failed, but it never leads to completely failing the lead/quest itself. The game will allow you to try again the next day, after the Loop resets and everything returns to its default state.

The game can force you to clear some of the mission objectives during the same day, for example performing a sabotage during the morning, and then taking care of an assassination this sabotage unlocked during the evening. Of course, our walkthrough will inform you of all such cases.