On this page of the guide to Death Stranding, we explain the most basic and important elements of the plot, which, traditionally for Hideo Kojima, is very complex and initially incomprehensible. You will learn, among other things, about the game's world and the main character. 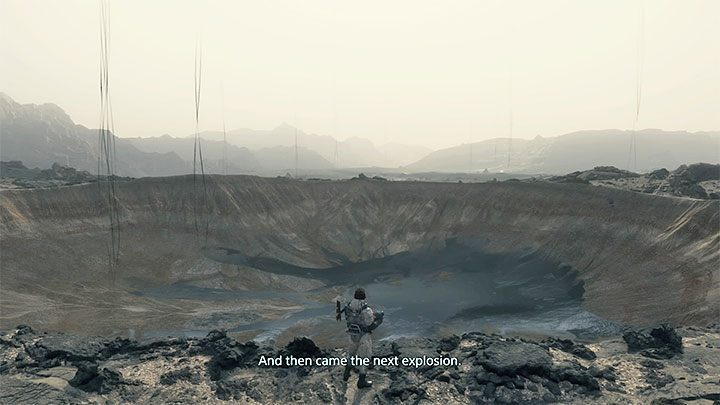 Death Stranding takes place in an unspecified future in the former United States. Humanity has experienced a cataclysm manifested in a series of explosions that brought supernatural phenomena called Death Stranding. The result was not only the destruction of the US population but it was also scattered all over the land.

The new cabinet established the existence of the United Cities of America (UCA). It seeks to unite society and bring order to the new world. When we start the game, UCA is led by a female president - Bridget Strand. 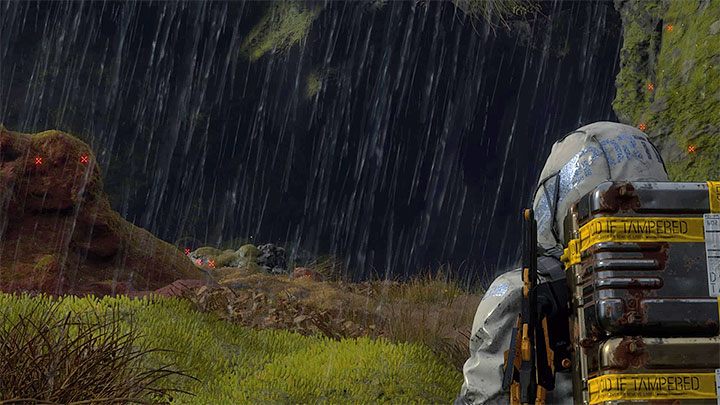 We don't know much about the cataclysm that brought the inhabitants of the former US to the present state. However, we can see the effects of that event right from the beginning. One of them is a new phenomenon called Timefall. 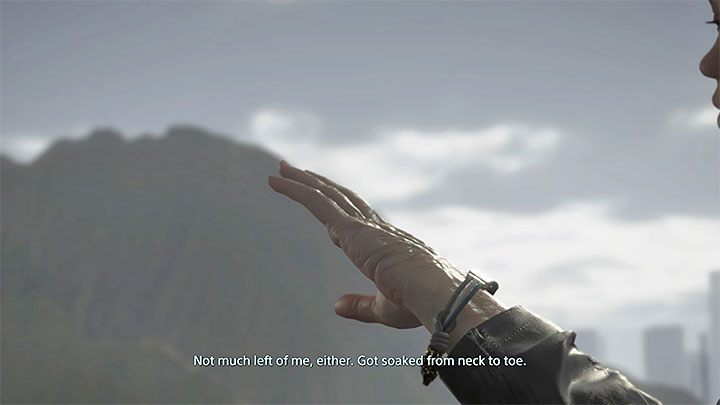 This rain is very dangerous to everything it comes into contact with. When it gets into contact with human tissue, it will cause rapid aging. We can observe this on the example of a woman named Fragile, which the main character meets at the very beginning of the game. Most of her body has been subjected to Timefall and aged significantly. The only part of Fragile's body, which has maintained in its original state, is her face.

In the case of other objects, Timefall acts similarly to accelerated corrosion - the devices and cargo undergo gradual wear and may eventually get destroyed (fortunately, there are mechanisms to counteract this). 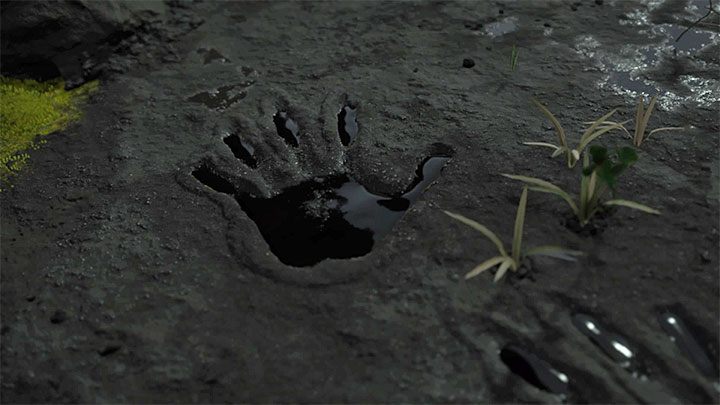 The second result of catastrophic events was the appearance of creatures called Beached Things - BTs. To put it simply, these creatures come from the world of the dead and are invisible to the human eye. We can learn about this at the very beginning of the game when the main character is surprised by BTs in the cave. The only evidence of BTs' presence are the marks appearing on the muddy soil.

It is worth noting that BTs don't see people - they rely on hearing instead. Some of the ways to avoid detection are to stay still and hold your breath. BTs are aggressive creatures and attack every living organism found. Their goal is to catch the detected creature and drag it into the tar-like substance. 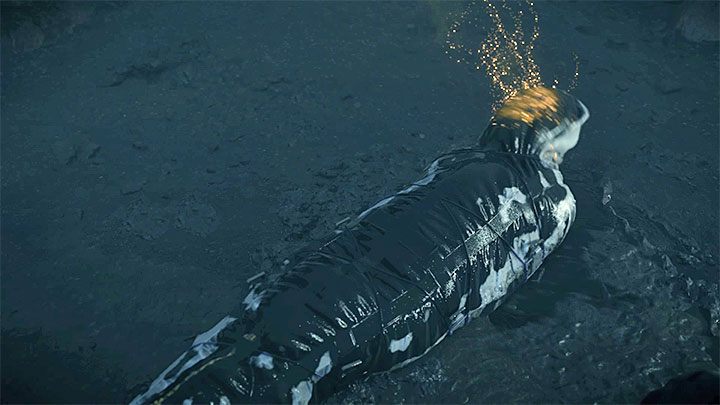 Another unique characteristic of the world is the emergence of a disease called Necrosis. This disease affects every dead person and it gets stronger as the corpse decomposes. Necrosis can be slowed down by freezing a corpse, but the only effective way to deal with it is cremation. Ignoring this step can cause corpses to explode with huge force (so-called Voidout).

The main character transports a corpse at the beginning of the campaign. The journey to the crematorium is unfortunately interrupted by BTs. Members of the transport crew fail to stop the explosion of the transported corpse. The whole area is destroyed, and Central Knot City turns into a huge crater. 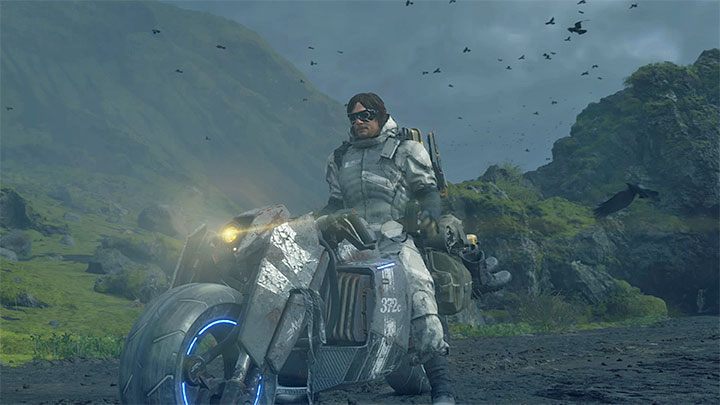 Sam Porter Bridges is the main protagonist of Death Stranding - he can be compared to a post-apocalyptic courier. The main character works for an organization called Bridges as a courier - due to the realities of the world, this occupation has become extremely dangerous. Sam loses his motorcycle at the beginning of the game. However, you will be able to get other vehicles later.

It is worth noting that Sam is unique in many ways. He has supernatural DOOMs abilities. In his particular case, they relate primarily to the fact that he can detect BTs presence, even if he doesn't see them. In the later part of the game, we learn that Sam's blood and body fluids also have unique properties. 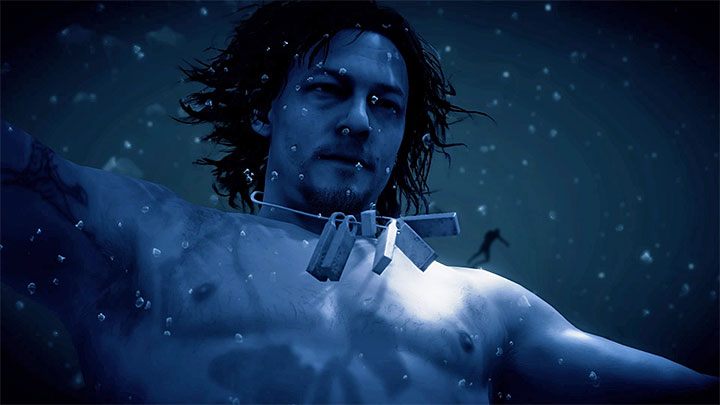 One of the unusual things about Sam is that he is referred to as a repatriate. When Sam dies, he ends up in an "underwater world" called The Seam. While controlling Sam's soul, we can find his body and bring him back to live. 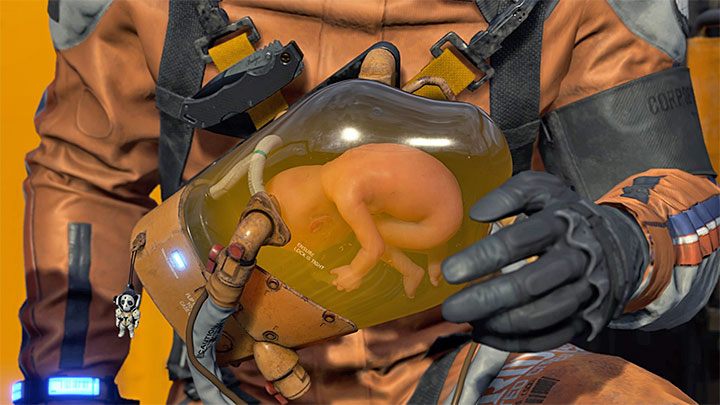 Bridge Baby - BB is one of the most important characters in the game. However, you won't know much about it at the beginning. This fetus, placed in a special capsule, was taken from a mother who experienced brain necrosis during pregnancy.

It is worth noting that some characters from the game treat BBs like objects, as a tool that allows them to travel safely. We learn that a fetus has a very short life span and that after their death they are replaced by another. This looks different for Sam because he becomes attached to his BB and tries to keep it alive. 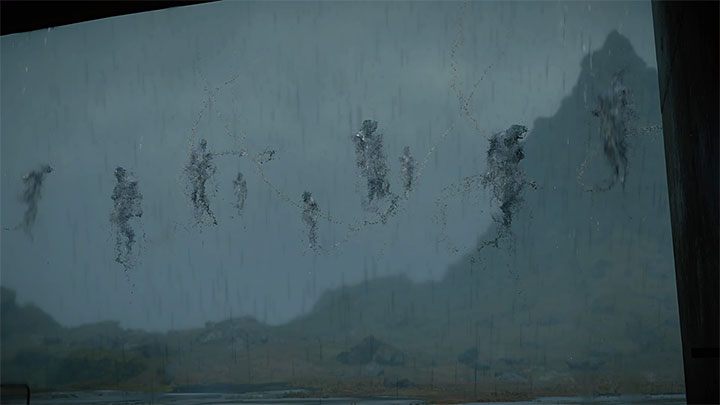 A unique feature of BB is that it can "connect" with the world of the dead. This has real effects in the game - the child allows you to detect BTs meaning that they cease to be completely invisible to the main character. This makes avoiding and attacking BTs much easier.

An important element of the game is the need to take care of the BB. Exposing the fetus to stress will make BB cry. In extreme situations, the Bridge Baby can also develop a disease called autotoxemia. Fortunately, Sam has methods in calming the baby down and healing it. 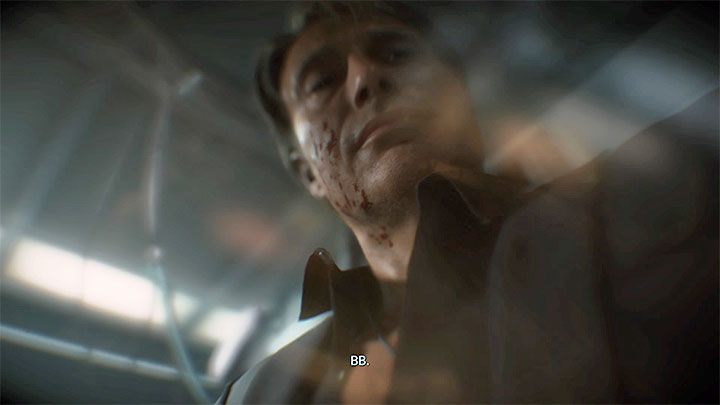 The Bridge Baby is also related to flashbacks that are experienced throughout the game. They focus on the man played by Mads Mikkelsen. At first, these scenes seem hard to understand. However, this state changes in the later parts of the game. Later, we learn more about the man from flashbacks and even meet him several times. At the end of the game we can watch the complete memory. 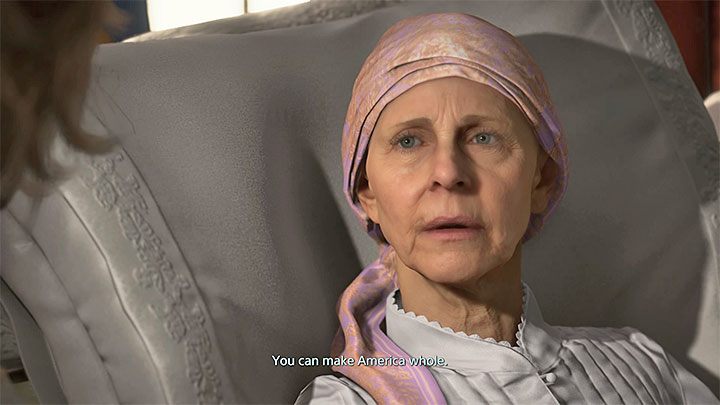 When the game starts, Bridget Strand is still the current president of the United Cities of America. She is also the mother of the main character, although we learn that he hasn't seen her for 10 years.

The first meeting with Bridget has a very depressing character - the woman is on her deathbed. We learn that Bridget has cancer and that the current state of the disease can't be treated anymore. The dying woman asks Sam for help in unifying the UCA and appoints her daughter, Amelie, to be the next president. 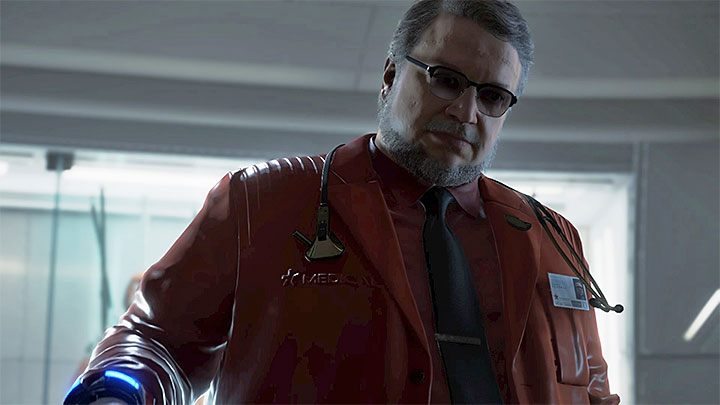 In addition to the president, we also meet a few other friendly characters. Besides the mentioned Fragile (representing the interests of Fragile Express), we also meet, e.g. Die-Hardman (leader of Bridges, and a person who directly took orders from the late Mrs. President) and Deadman (formerly a coroner, now a person looking after BBs and leading research on the BTs). 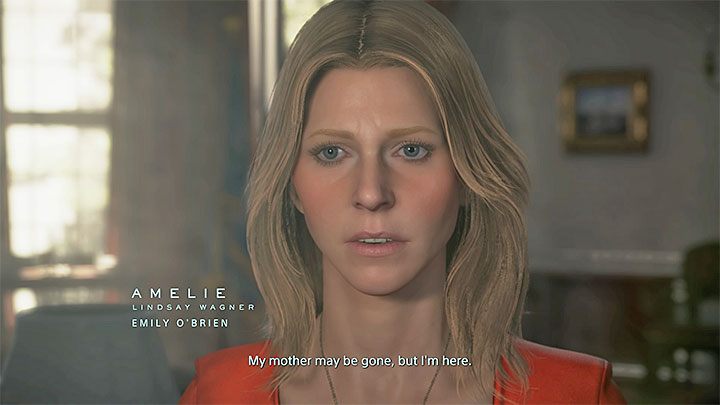 Amelie Strand is the sister of the main character and one of the more mysterious characters of Death Stranding - her body has stopped aging and she can meet Sam on the Beach. During the first conversation with her, we learn that her expedition reached Edge Knot City where she was taken prisoner by members of the Homo Demens group. The woman asks the protagonist to get to Edge Knot City and free her so she can take office as President and continue the vision of rebuilding America started by her mother. 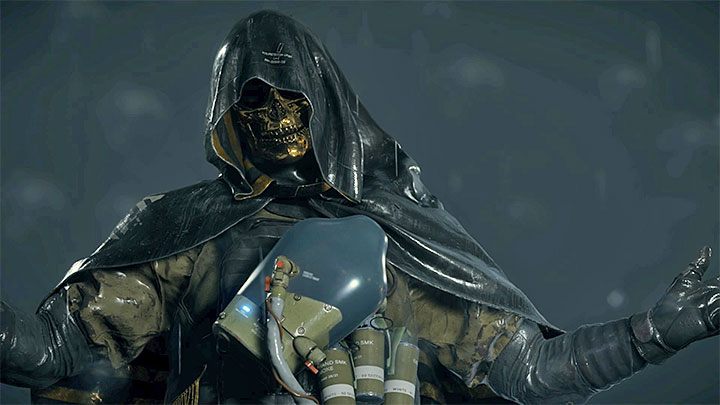 The aforementioned Homo Demens is a separatist group opposing the UCA. The most important character associated with this grouping is Higgs, who hides his face behind a golden mask. This man appears repeatedly in the opening chapters, and the game suggests that he is one of the main antagonists. As the campaign progresses, we learn more about Higgs, his relationship with Fragile, and his true identity. 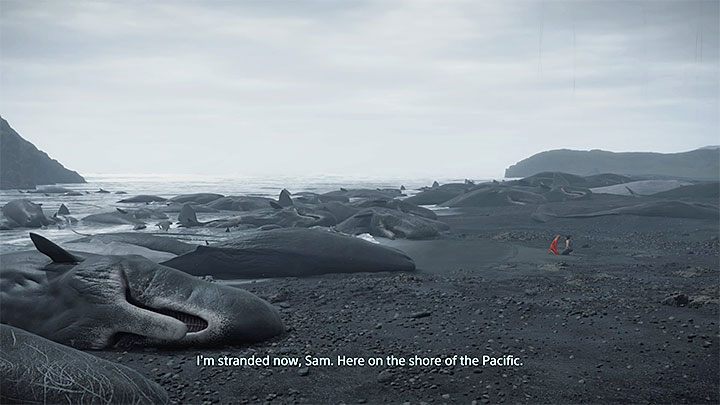 Beaches are a unique location in the game - this is where the souls of the dead go. Each beach is individual to the person with whom it is connected. Beaches of different people can also connect and this happens, for example, if they died in the same place. A unique feature of the main character and some other characters is that they can travel between the Beaches and the world of the living.

The Beaches are mentioned first during a conversation with Amelie's hologram. Sam learns that her body is still on the Beach and that she has stopped aging. During the game, Sam meets Amelie on her Beach. Its characteristic feature are dead whales (they were washed up on the shore and couldn't return to the water). We learn more on the significance of Amelie's Beach, as well as her state near the end of the game. 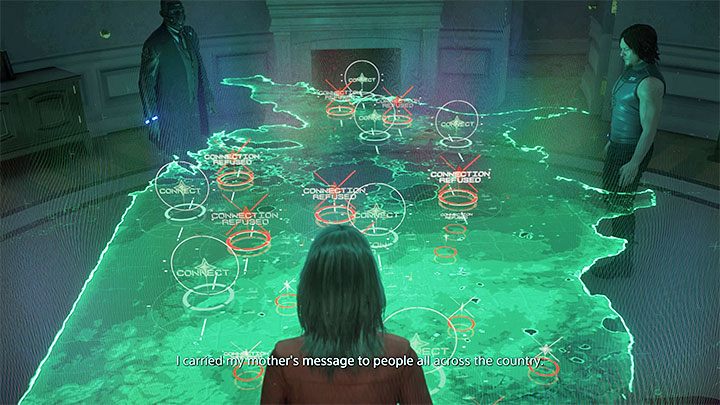 The expansion of the Chiral Network is one of the main themes of Death Stranding. It can be defined as a futuristic version of the Internet. Facilities that have joined the chiral network can share knowledge or communicate with each other.

It is worth noting that not every character met during the game wants to join the network and thus become part of the UCA. Some NPCs will ask Sam to earn their trust first. We join new facilities to the network by using an unusual necklace - Q-Pid.

In Death Stranding, the interpenetration of player worlds isn't a phenomenon that remains unexplained. The multiverse appears several times during the campaign. It means a scenario where an infinite number of dimensions exist. In the game, these dimensions can mutually blend and interact with each other. We can find traces of the presence of other players and leave messages and objects that will be found by others. However, we will never meet other players directly.