Dead by Daylight Guide by gamepressure.com

This DBD guide page describes the most effective builds to help survivors quickly repair generators. From this page, you will learn what perks you need to purchase.

These builds focus on repairing the generators as fast as possible (so called gen rush). This will make the whole game proceed faster, and the killer will have less time to chase survivors.

In the game, many perks accelerate the progress of generator repair. If you focus on fixing generators alone, then the optimal combination of perks will be:

With this particular combination of perks, the synergy of Hyperfocus and Stake Out plays a major role. This is because one first requires hitting Great Skill Checks, while the other allows you to hit them very easily. However, the circumstances can become complicated when you deal with Undetectable killers. If they have this status imposed, their terror range is cloaked, so the Stake Out is unable to charge. 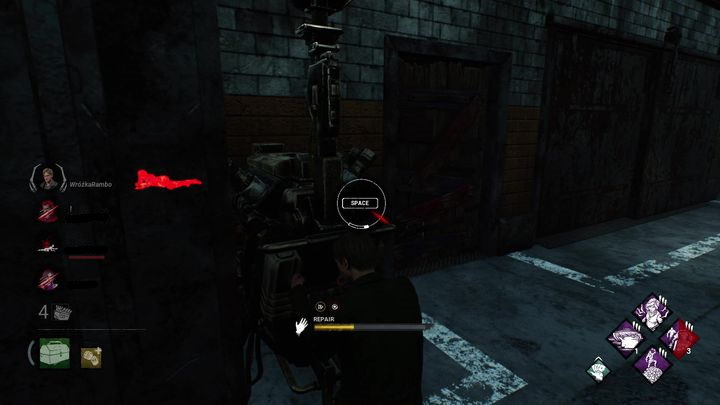 However, the most unpredictable perk in this list is the Fast Track. How many times you'll be able to use it depends on how often your companions get hooked.

If you prefer to repair the generators in a group, then one change have to be made in the build described above. Choose Prove Thyself instead of Stake Out. This perk makes it so that anyone repairing a generator within 4 meters of you will receive a 15% bonus to progression speed.

The build described above is a safer option that does not require taking too much risk. However, if you are confident in your skills then you can use the following build:

In this case, you must first take damage and then cleanse a Totem to gain the bonus from Overzealous. You have to repair generators in this state. So if you are detected, do everything to avoid being hit. You can reduce the risk to some extent. If you use the Med-kit, you can heal up to 99% and repair in this state. As soon as a killer appears, you complete the process of restoring health. However, this method will not work if the bleeding effect is imposed on you.

This site is not associated with and/or endorsed by the Starbreeze AB or Artificial Mind & Movement/Behaviour Interactive. All logos and images are copyrighted by their respective owners.