When you collect equipment, many things may happen. It's limited only by your imagination. This part of guide describes the most popular ones. 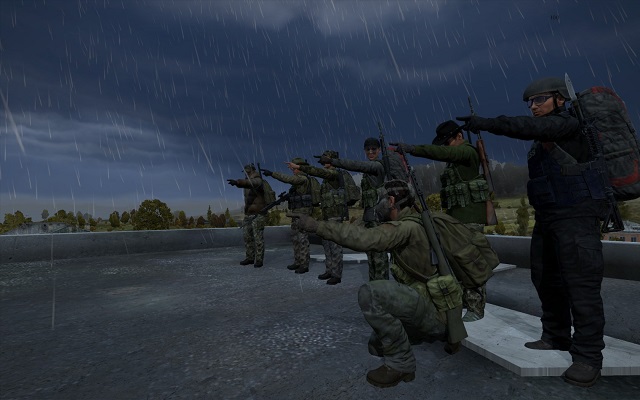 Team gathered in of the Chernarus' cities

Bandit or a hero?

Two most typical player's type are bandit and a hero. It's not obvious that bandit is totally bad. Choice is yours, and no one has a right to force you to anything. You should have fun.

When you get a weapon, ask yourself a question: do you need to use it ASAP? If answered positively, it means that you may become a bandit. Such a player treats everyone as a threat and fires at all players. Such a behavior is justified, as everyone is worried about equipment. Typical bandits head to the cities, where newbies are collecting equipment. They like to set up next to big buildings, hospitals and police stations. The biggest battled took place in Elektrozavodsk, but now they happen in Berezino. This will change as the respawn places will change in next patches. Entering one of those places without weapon kills you.

The other typical locations where you can meet bandits are mostly airports. They like to be in buildings like control towers and prisons. You can hunt them down with glitching or use someone else as a bait.

Bandits love to overpower you and use handcuffs. They also often take your blood. Then they grab wood, water and clothes and then feed you with rotten fruits. As you can imagine, it ends with death. Thinks yourself, it that satisfies you.

This type of player just like helping. If you don't feel great in shooting and you don't want to kill innocents, you should try to be a hero. First of all, find several additional food cans and water bottles which you can share. Your task would be to help others. Often it's about information or sharing food with freshly respawned player. Of course, you can also have fun while hunting at bandits. The easiest way is to ask other players if they heard gunfires and then start hunting.

Heroes kill too. No one tells that they don't. But they think that killing the innocents has no sense, as they are no direct threat. That's way many players combines those two types of gaming, what seems to be a good choice. If you do that, you help the weak ones and fire at the armed ones.

When you collect all items you need, there are some curious places to see. One of them is Devil's Castle on north. There is nothing special in term of items, but the view is magnificent. Another fine place are blocks nearby Chernogorsk. It's a bit similar to Pripyat, which lies in Ukraine, nearby the Chernobyl. Don't forget about the ship wreck on north from Berezino. When you enter it, you can admire beautiful views (and collect some items).