In DayZ: Standalone you will often visit cities or stop somewhere to search for ammo or food. But in most cases it's connected with attacking and defending some particular areas. 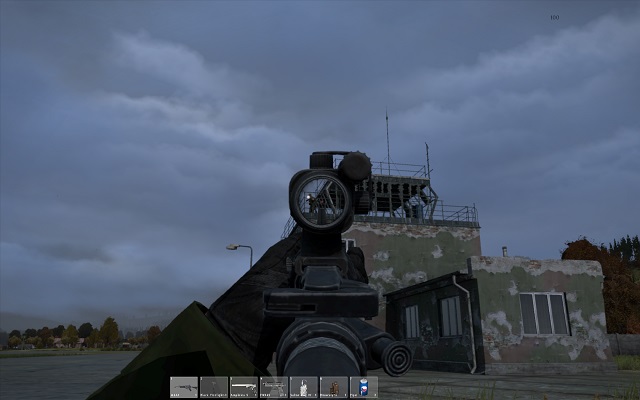 Damage system in this game is very realistic, sometimes one or two shots kill you. Due to the randomness of events, you can't be sure for 100% that you're safe (except for when playing on empty server). When somebody is firing at you, you have a little of time to find him and counterattack. What is more, when you die, you most often lose your equipment (it's destroyed or enemy uses hide body option). Exception happens when shoo-out takes place in cities in which you can respawn (e.g. Krasnostav, Berezino). That's why, you should attack wisely and defend rationally.

Before you attack or defend yourself, you need to recall that the game is in alpha version. Because of that, many players use the bug called glitches. It allows to look through walls. To use it, in TPP, approach the wall with gun in your hand and press E or Q to lean out. It's not honest, but majority of the players uses it. So don't be too surprised when enemy knows you position.

Moving carefully within buildings is also important. If there is anybody inside, he'll probably hear you. So avoid running. Before you enter the building, check windows and roofs.

To attack or defend someplace, you need at least two players using some communication device (teamspeak, skype). Exchange of information is crucial. Too little or too much of it and you'll probably fail. That's why, it's recommended to play up to 8 persons in a team. You should also limit information to the most crucial ones. Before you enter the game, you should give names for the locations (hangars, crucial points). It makes the game easier. Good information is short information.

Attacking and defending the popular places

All players love to visit the biggest airport, as you can easily get armed there. So it's get the most detailed description here. When you are attacking this place, think about how to avoid threat - mainly posed by enemy snipers. The easiest way is to get there from south. Stop at the wells and prison a bit to look around for enemy snipers. The most often they are on the control tower or the roof of the shed. When you're sure the terrain is clear, head to the shed, from where make further observations. The best is to run next to the fence, passing on the hangars. Next step is to make a thorough search of the shed (all floors), from where you have a good view. If you still don't have proper equipment, head for the tents. Theoretically, you can also check prison, but there will be a plenty of other players. If you play alone, run through the forest towards the tents (there is a lot of add-ons and ammo to be found there). At the end you find a road leading to the hidden base, which is rarely visited by other players. Following this instruction should provide you rather safe travel.

Defending this place is much more easier than attacking, as there are various locations where you can surprise enemy. In such a way, you can easily collect equipment. For example, as a lonely sniper, set yourself up on the western side of the airport (avoid control tower or shed's roof, as they have no escape routes). When you play in a bigger team, you can focus e.g. for setting up one part of the airport. You can also risk getting into the prison and set your men there. Remember about glitches, which allow to look through the walls. But it may work both ways, so be careful.

Airport at Krasnostav is very often visited by players, new ones and those armed ones. It's smaller than this northern-west one, so attacking it varies a bit. The most dangerous moment is when you approach the buildings, as you'll be under the sniper fire. So it's best to approach the tower and prison from the south. But watch out for incoming fire. If you play in a group, set up a sniper at the fence. What is more, remember to check windows before entering the buildings (locked door often means a trap). You can use glitching and check rooms.

Of course, defending is simpler. You just need a sniper. He can set up nearby the northern forest. From there you can see all buildings, but it's far away. It's recommended to use the proper telescope. Rest of the team should stay in one of prisons or in the control tower. If you play single, choose one of positions above and wait for enemies.

Krasnostav airport is very similar to the one at Balota. The only difference is size of the tent field. If you respawn closer to the south, head for Balota as you're less likely to meet other player. What is more, a lonely sniper may stay under cover of buildings at Chapaevsk.

Airport is also a perfect place to friend other survivor. But remember that there is always a possibility of being backstabbed. You can also do that - this is what survival is about! That's why you should choose your companions wisely.

When you enter bigger cities you always meet other players. Those are often bandits (more about them in Chapter 10) who fires at everything that moves. They like to sit in bigger buildings, like schools. If you have weapon and courage, you can look for them. You'll surely get a nice shootout and maybe some equipment. There isn't one universal tactic for attacking particular city. But you should keep up with some rules: try to run behind fences and at the border of the city and when you hear fires, don't run into the middle of shootout. You should also watch out for windows.

When it comes to defense, there is no such a problem. It's enough to get to the building mentioned in the Chapter 4 and wait for players to come. You can also set up a sniper at some high point (roofs, cranes), so he can observe the city from above.