A Good Soldier is a storyline consisting of series of missions that take part in the closed Crater Lake area, when you finish the main storyline in Lost Lake. Deacon is joining a new military camp in this area on his own, and until he has completed most of the missions in the region, he is unable to return to any previous locations. Below you will find a description of the story missions taking place in this storyline.

Prove It To Me / Driven to Extinction

Once you reach Crater Lake with Mike, after the first mission Mayday! Mayday! and visit the camp, go with Captain Kouri to the scene of the investigation. Examine the bag on the bed in the cottage. Exit the second door and examine the cut wire on the fence.

Go back to the building where you fought with the bear and go to start the search.

Follow the tracks and take care of the hungry wolves. Then examine the deer's body and continue to follow the trails. Explore the subsequent tracks until you pass the Horde near the sawmill.

Don't Give Me Orders

The continuation of the mission. Eliminate the threat: 15 opponents. Enemies are not aware of your presence at the beginning. Save your ammo and eliminate them quietly, as long as it's possible.

In the back you will find one sniper on the cart.

We Will Take Back This World

Reach the top of the mountain located in the center of the camp - meet Garrett. After this mission, you will start two side quests that are part of Protecting The Weak and Bounty Hunter storylines.

Leave All That by the Door 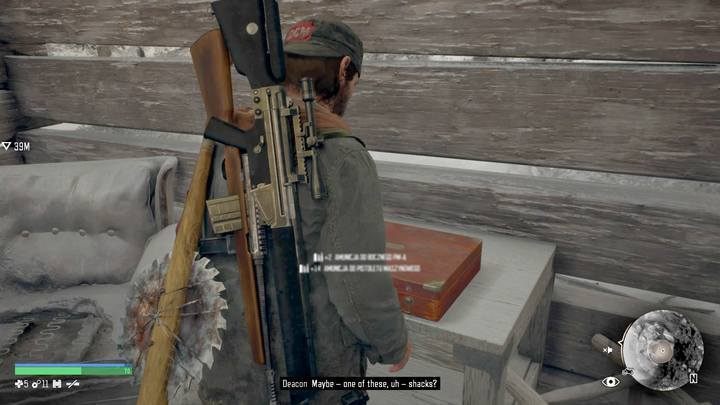 The chest for Weaver

As soon as you're done touring with Garrett, Weaver will contact you over the radio. Go near the second camp (fast travel) to the west. The item you are looking for is in the corner of the second building (squeeze through the chests). 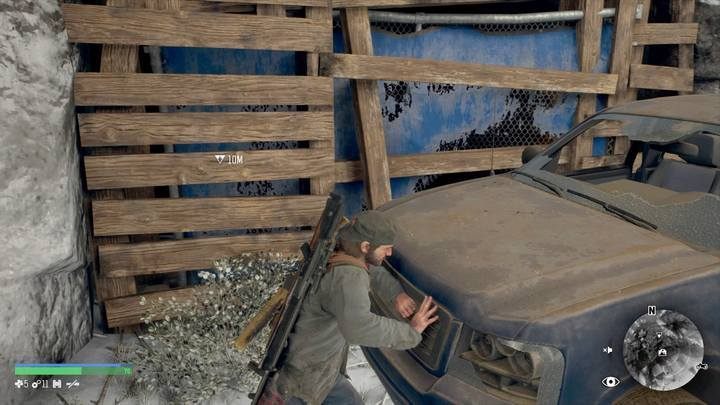 Go to the cave and push the blue SUV that blocks the entrance. Take a sample inside and jump down - you will find a few Freakers. Do not blow up the canister, it is best to use only melee weapons. 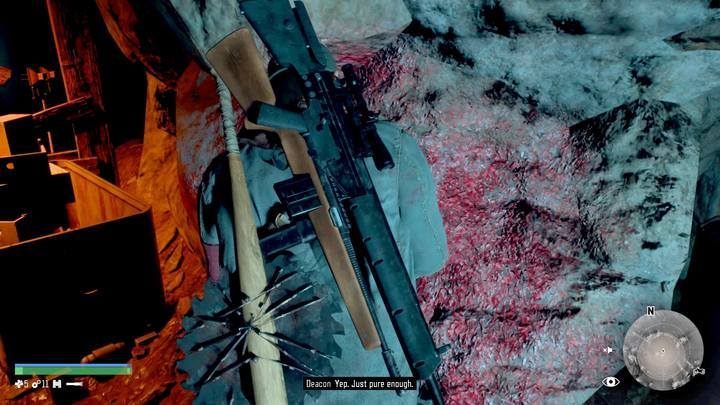 Search for silicates on the stone walls

Look carefully because you have to collect the red cinnabar samples located on the rocks. Start the generator - you need fuel from the canister you found earlier. Collect the remaining 5 samples from the tunnels and escape through the old shaft. 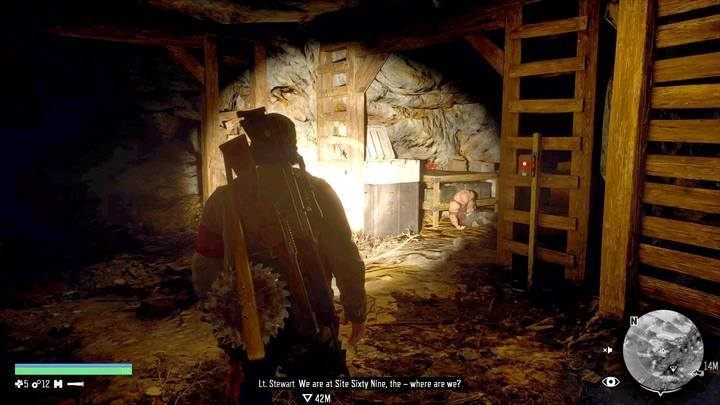 Don't forget to collect NERO Injector located above. Once you are done, exit the cave and return to base.

I Know The Look / I've Had Better Days

After I Know Things Are Strange (I'm Never Giving Up) mission, go to meet Dr. Jiminez in Wizard Island Camp. After a short conversation, you unlock a new mission - this happens when Taylor contacts you over the radio... 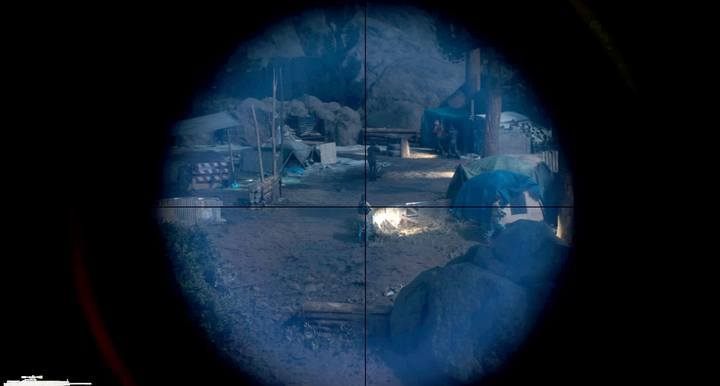 All enemies can be defeated with a sniper rifle

I Tried To Hit That Once

You unlock this mission immediately after Afraid of a Little Competition? (I'm Never Giving Up). Go south-east, not far from the place where you rescued Weaver. 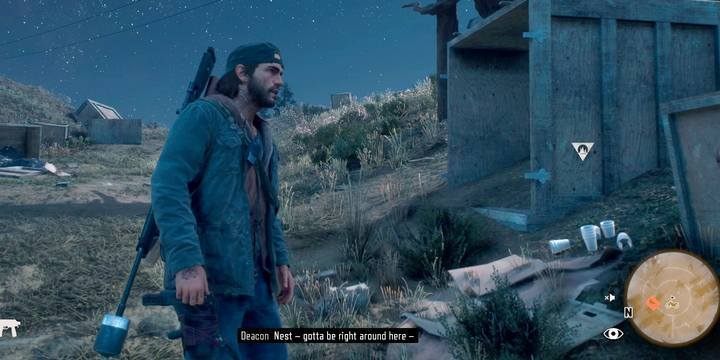 Wooden boxes are placed along the side route. Inside, you will find 7 pieces of polystyrene - plastic cups. Collect them all (they are only near the road). The starting point for the next mission is Sarah - Just Another Requisition Form (I'm Never Giving Up).

You Can't Be Replaced

After completing the missions for the commanders of Wizard Island, you will again go to Dr. Jimenez. After that, talk to Sarah in her tent - you start What Kept Me Going (I'm Never Giving Up).

This One's On Me

Go to the field hospital after you complete We Couldn't Take The Risk (I'm Never Giving Up) mission. After this brief mission, you'll unlock yet another Garrett's speech - My Eyes Have Been Opened (Law and Disorder).

I don't wanna Hang is another story mission that can be unlocked after returning with Sarah from Lost Lake. Clear the surroundings of the resort from enemies and head to the main entrance of the building. After the cutscene, the mission is over. The next mission will begin when Sarah tells you on the radio when you are out of the camp: This could be it (I'm never giving up).

This mission will start automatically after defeating the Horde in the mission This could be it / You alone I have seen (I'm never giving up). It's just a conversation with Garrett in the ark (tunnels). After it, however, you unlock the option to talk to Garrett (Evil surrounds us (Law and disorder) and optional mission bounty Hunter - do not want to know.

He's not big on tunes

This mission will start automatically after defeating the Horde in the mission This could be it / You alone I have seen (I'm never giving up). Head East to find an MP3 player for Weaver. 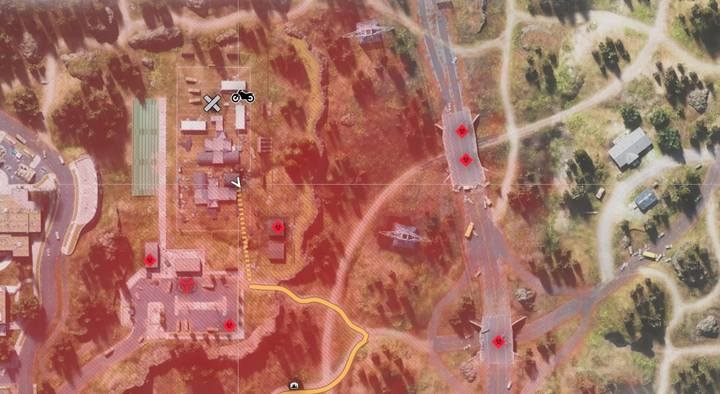 If you haven't cleared this spot before, expect a Horde here. Defeating it is not a necessary step - when you know where to find the player, you can quickly collect it and run. You will find it in the South-Eastern tent, in the Central part of the complex.

Attention - complete the task and an optional activity in this location before you start the quest. For this task involving mainly cutscenes, you go straight to the latest storyline of story missions - Race against time. Many tasks and activities will be available after the end of the story campaign.

Complete the mission, What It Takes to Survive (I'm never giving up) to start this mission on the Wizard Island. If the mission does not appear in the diary, try also to perform the tasks The Anarchists Spy (Bounty Hunter) and Just Doing My Job (The Marauder Camp Hunter). The mission begins with Garrett's speech, which is the final speech (secret).

At the beginning of the mission, follow Sarah carefully to avoid the guards. Sometimes she will deal with them, another time you have to help her when talking to soldiers. Take your time and wait for her to act.