The Earning Out Keep storyline starts when Deacon and Boozer go to Iron Mike's camp in Lost Lake (after the We've Done Things (He's My Brother) mission). These tasks are a small part of the plot in Days Gone and focus on the tasks related to the camp and its problems. Below you will find a description of the tasks in this thread. 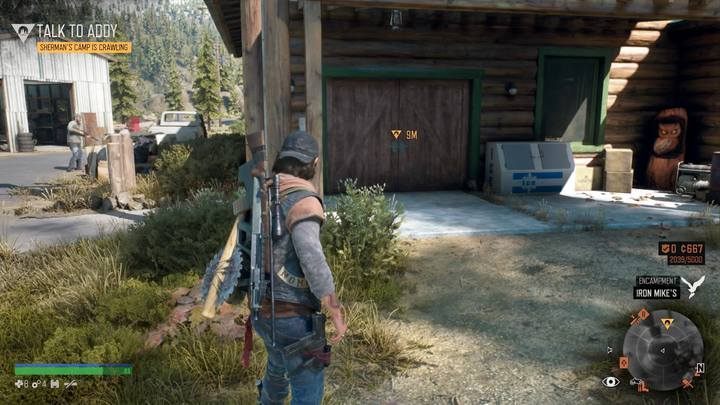 Talk to Abby in the infirmary

The mission will begin after the prologue at Mike's camp has been completed - We've Done Things (He's My Brother). Talk to Abby in the camp. 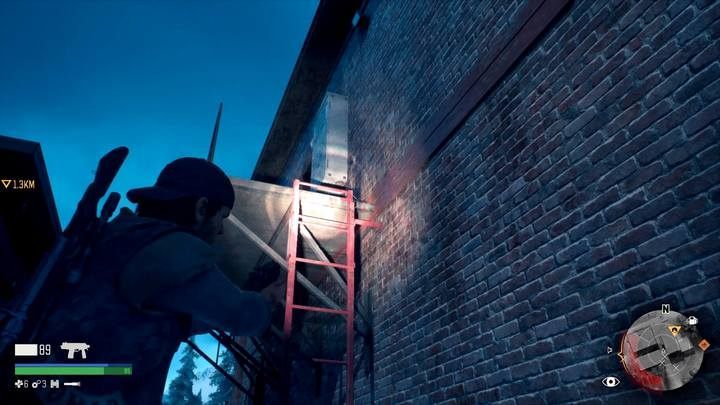 Go to a nearby town, where you'll find a lot of Freakers and human opponents. You don't have to worry about them, especially when you enter the town from the north. To get to the target building, shoot down a fire ladder to enter the building through the upper floor. You will find the knife in a case on the ground floor.

You will start the task after completing the mission for Rikki: A Goddamn War Zone (Bounty Hunter). You will go scouting with Iron Mike to learn more about the horde.

You See What They Did / Do You Have My Back? 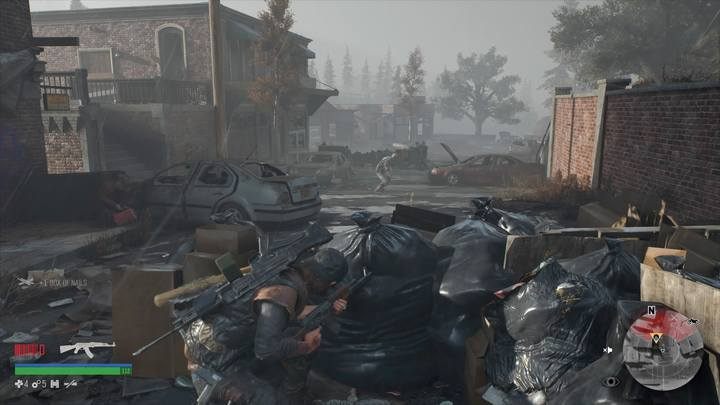 Meet up with Mike. You will go to the town in the east and visit two buildings. In the second one there is an ambush waiting for you. Quickly take care of the three enemies that enter the building. Outside, let your enemies fight on the right, you go left. Pave your way out of town until you reach the motorcycles. Tips:

After this mission, you will unlock the attractor schematic, which is used to attract people's attention or focus Freakers in one place. The name of the next mission is: On Herod's Birthday (I Remember).

After completing this mission, you will unlock many new tasks, including side tasks for the rest of the camps and access to the western part of the map - Iron Brutte.

I Got a Job for You / They Don't Like Visitors

To unlock this task, you need to complete several previous missions, including You See What They Did / Do You Have My Back?, and a later task for O'Brien (I Remember - On Herod's Birthday). 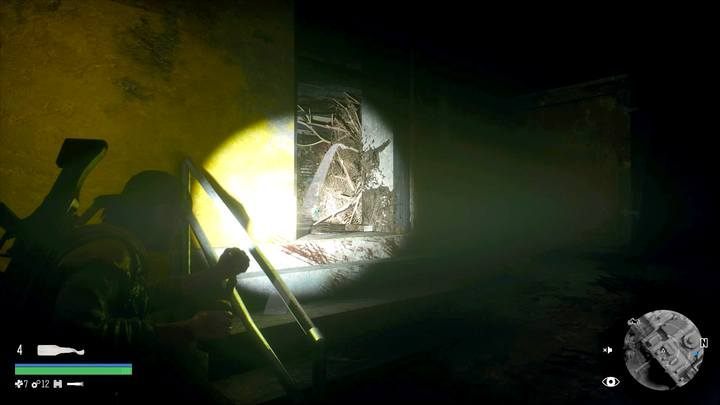 Set fire to the Freaker nests in the basement of the power plant, and fend off their attack

Go with Rikki on a long journey to a water power station. There, follow her instructions while moving around the location (you are safe, you don't have access to the weapons). Only when you go lower to search of fuses will the danger appear. You have to get rid of two nests on opposite ends of the basement. It's best to follow Rikki to work together on the problem (and not get her killed). 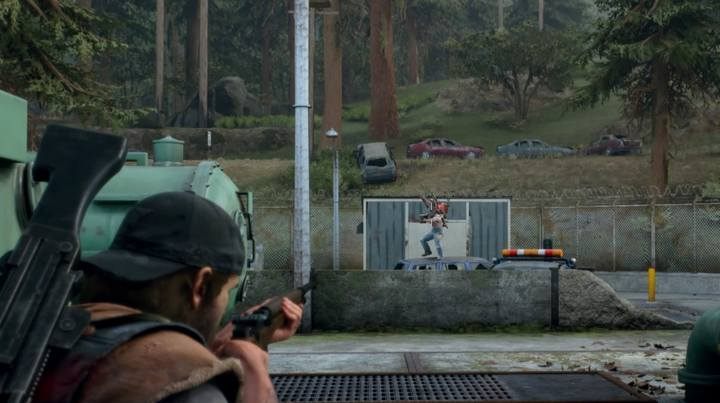 At the end of the power station you have to deal with the armored opponent, because he blocks the way to motorcycles

So that the whole thing isn't too easy, there are Rippers waiting for you - and there are many of them. Fight carefully and don't push yourself too much forward. Also, keep in mind that Rikki will be happy to flank the enemy. At the very end, an armored enemy with a heavy MG will be waiting at the motorcycles. It's worth attacking with a special weapon: a sniper rifle (armor piercing capabilities) or a crossbow (with the use of special bolts).

It's a Long Story

This part of the story is a return with Rikki to Mike's camp. It consists only of a journey and a cutscene.

For this mission, equip yourself with a strong and durable melee weapon (have some optional Scrap to repair it). Go with Skizzo to the mine. Get rid of the Freakrs on the roof and get help from Skizzo to enter the roof. On the first floor of the building you will find keys and on the ground floor - flares. Open the door on the first floor and go to the mine. 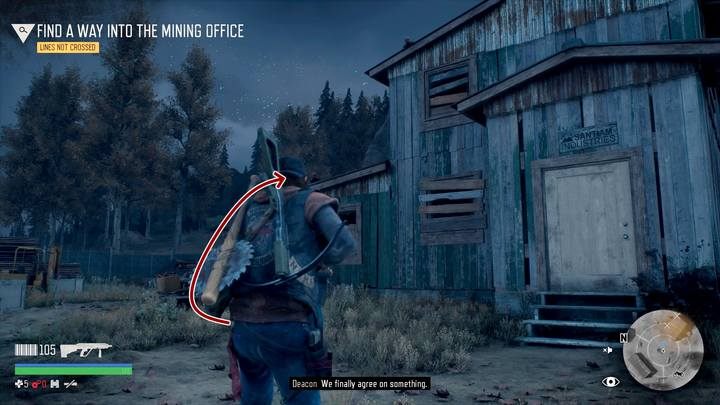 Your keys will be stolen while moving through the mines. Trace the trails of the little Freaker and return the keys (get ready for the trap in the form of Quick Time Event). Then quickly get back to Skizzo - your weapons are locked, so you can only rely on the melee tools you've equipped.

We're Not Hiding / That's His Mistake 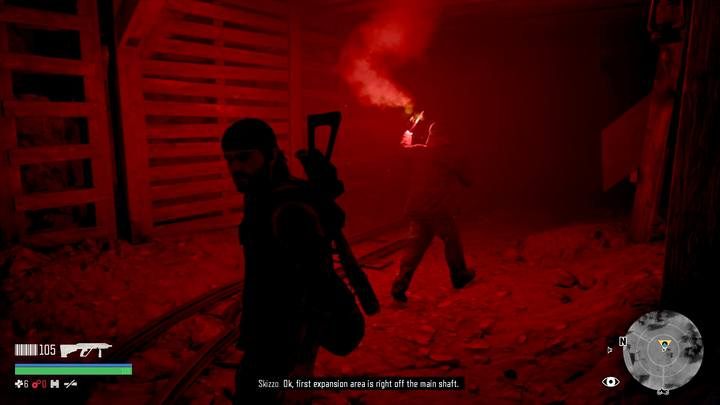 Go to the caves following Skizzo and listen to what he says - sometimes you need to do some simple action.

Here you continue your previous mission, looking for dynamite in the mine. After you exit the main, you will meet a group of Marauders. There are only five of them against you and Skizzo, so it won't be a problem for you. After that you return to the camp and the mission ends.

Better To Light The Candle / Outta The Darkness

After completing the No Beginning and No End (I Remember) mission , go to a nearby gas station to help Rikki in repairing the transformer. It's a quick mission. 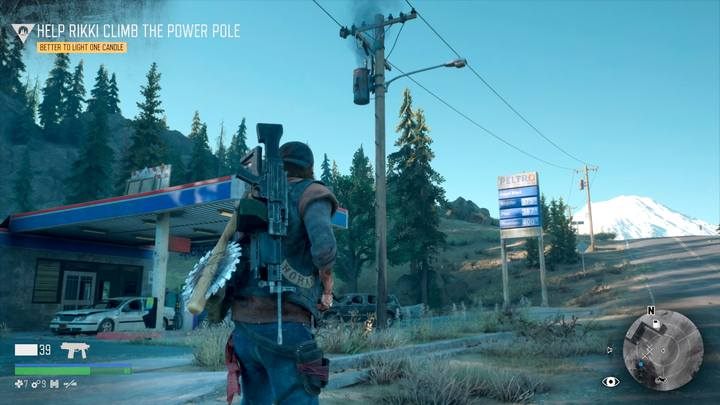 Watch out for Rikki, protecting her from enemy attacks, coming from the gas station building.

While Rikki will be doing repairs on the pole, protect her by eliminating the little Freakers. They come to her one by one so you can use melee weapons to defeat them, but keep in mind that you have to shoot the little Freaker who jumps on Rikki's back. After this mission you finish the thread to Earning Our Keep and you will be rewarded with a new skin for the motorcycle.