There won't be much gameplay in the I Remember questline: most of the missions are fillers, which are either simple tasks or cutscenes related to Deacon's story and the background of Days Gone. It's worth doing these tasks first as soon as they're active, as they're quick, easy, and rewarded with experience.

What Did You Do? 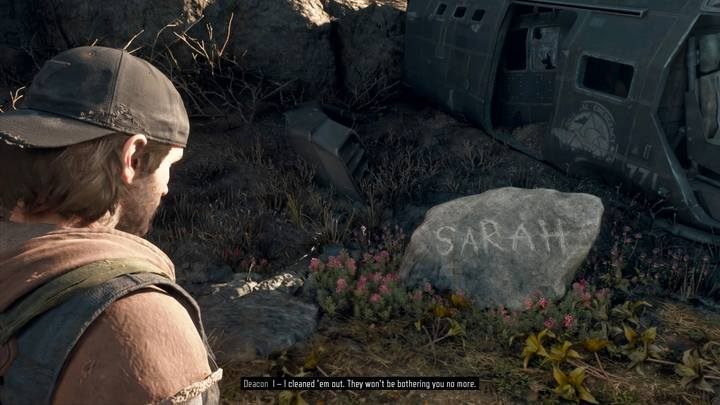 The mission begins when you visit Tucker's camp in the Price on Your Head mission. Complete this mission quickly: all you have to do is go to the north of the Belknap region and eliminate 9 Freakers at the back of the area. Then you will see a cutscene showing a longer version of the character's prologue; completing this mission will net you some easy experience. Go to the next mission: Searching for Something. 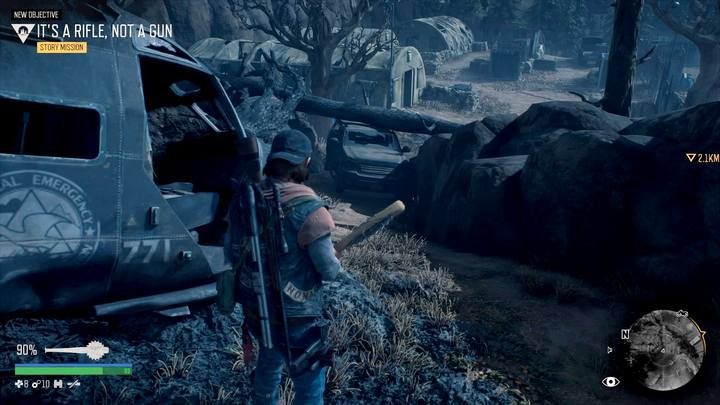 Note: it is worth pushing away the car blocking a shortcut to the stone with Sarah's name - you will come back here more than once.

Searching for Something / What's A Nice Girl 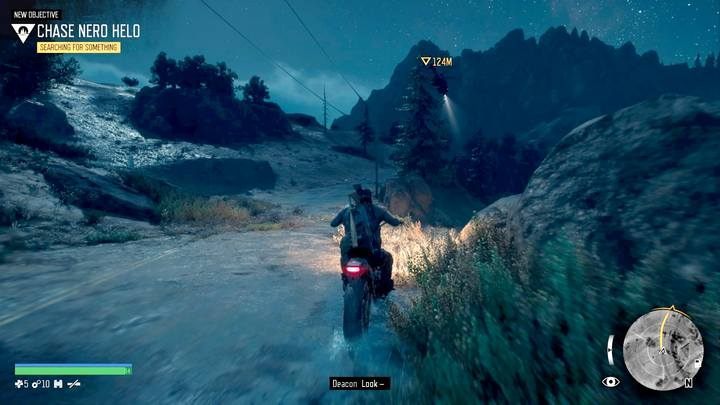 One more quick mission dedicated to Deacon's story. Go to a indicated place in the north and follow the helicopter - if you fail, you'll have to start again. While driving through the mountains, watch out for a wolf that tries to throw you off the motorcycle: shoot it with the gun. 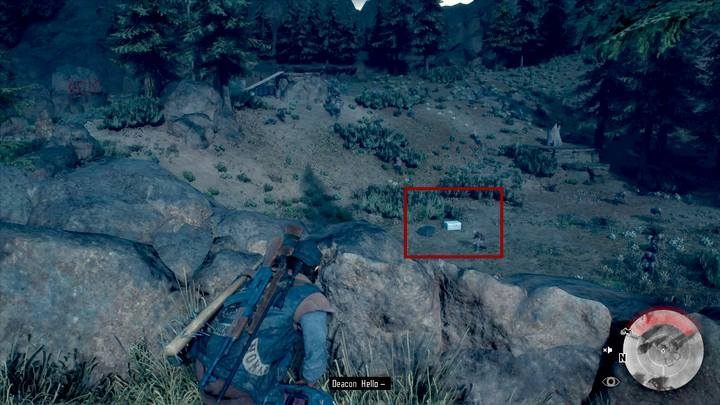 When you finally get to the place, collect the communication device left behind by NERO agents (eliminate the threat first). Then a little zombie will steal the device from you - shoot it down instead of chasing it. Then you will have to watch quite a long cutscene and the task will be finished. The next mission is Drugged Outta His Mind (Gear Up For the Ride).

It Was On Me 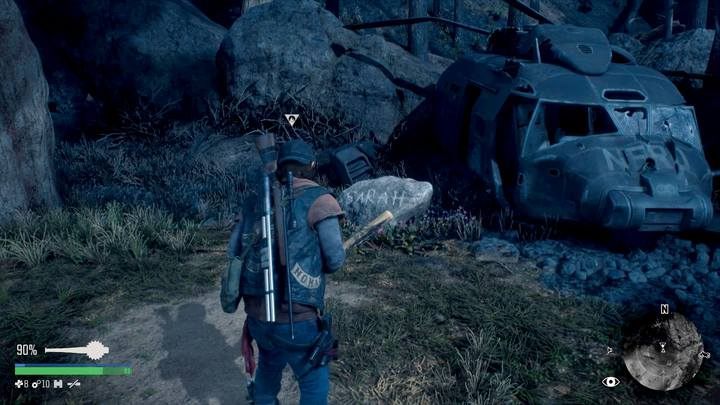 This mission will start immediately after saving Lisa and taking her to Tucker's camp in the It's Not Safe Here (You're Safe Now) mission. Return to NERO checkpoint in the northern part of the map and have a monologue at Sarah's stone. This is a quick way to get some experience.

This mission will start immediately after saving Lisa and taking her to Tucker's camp during It's Not Safe Here. Listen to the radio message. 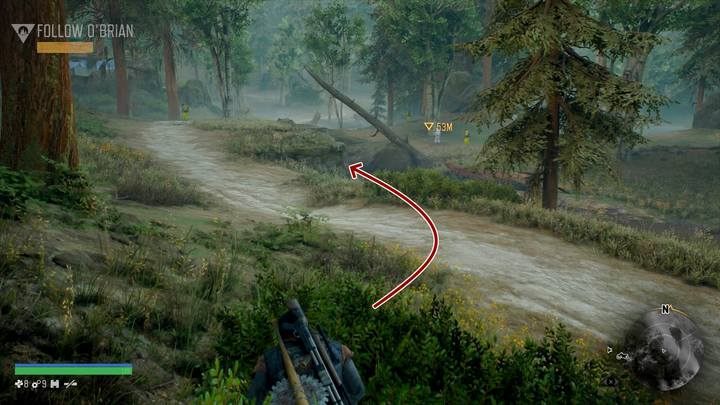 Go to the first region. Here you have to sneak past NERO soldiers in suits, who are untouchable for you. The only option is to sneak in unnoticed, using bushes and distracting them with stones. You need to get close to a squatting scientist in a white suit and listen to his conversation. Go near the group as you head up the river, then turn right and move between the bushes. All you have to do is get close to him, but watch out for the last guard standing between you and O'Brian, and the cutscene will begin, followed by the completion of the task.

The mission will start right after the thread of Lisa and bringing her the stone I Brought You Something (You're Safe Now). This is another memory where, in addition to cutscenes and walking, you will collect 3 pieces of lavender growing along the river in a memory.

I Should Have Left Her

This task will begin immediately after the What Have They Done? (You're Safe Now) mission. This is another side mission related to memories. If you don't complete it before you go with Boozer to Iron Mike's camp, it will be lost. The goal of the mission is only to go back to the memorial stone in the northern part of Belknap, in the NERO checkpoint.

I Need Your Help

The mission will begin after the Lost Lake prologue at Mike's camp has been completed - We've All Done Things (He's My Brother). Go west to Lost Lake to meet O'Brien. Be careful - there is a horde next to the meeting place. 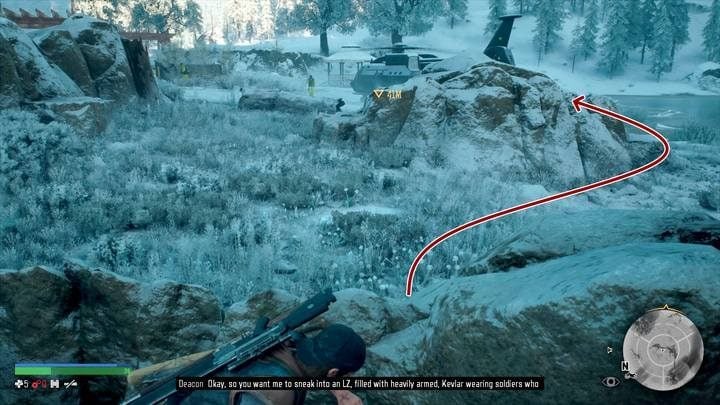 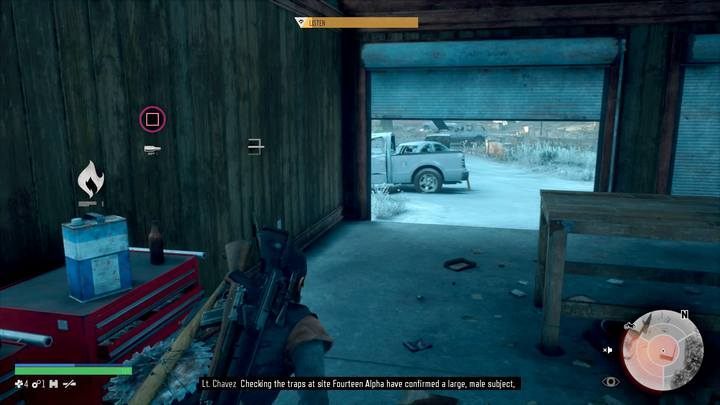 Go back behind the rocks and retreat to a safe distance, then go around the buildings and hide in the shed from the other side of the complec to listen to the scientists talking.

It's On a Mission

This mission begins together with the He's Full of Crap mission you've fund medicine for Boozer in Playing All Night + With Other Man's Blood (He's My Brother). 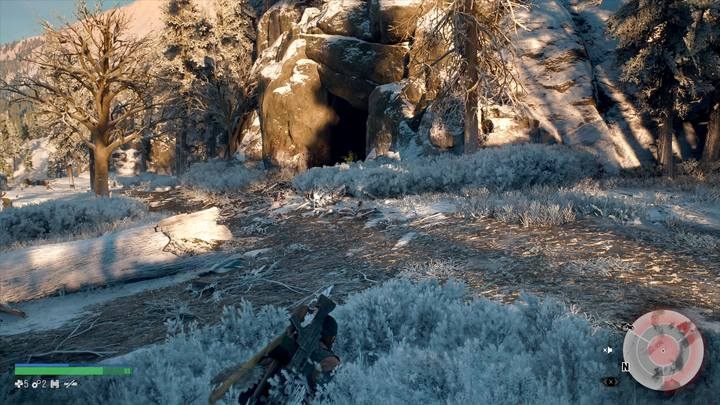 Entrance to the cave

You'll find NERO soldiers at the location you're looking for. Follow them into the cave (distract the guard near the cave by using a stone) and hide in the bushes, listen to the scientists talk. You will unlock a secret: 2. Researcher Field Note - 2064.

Tip: When escaping from the cave, you can go to the far end of it, where there is a small passage leading to a second, unguarded cave.

This mission starts together with It's On a Mission mission after finding medicine for Boozer in Playing All Night + With Other Man's Blood (He's My Brother). 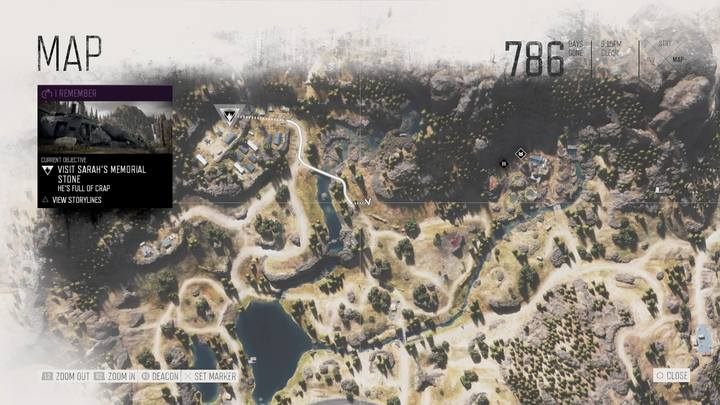 Head for the monument

Once again, you will only have go on to talk with Sarah in the north of Belknap, and again it is an easy way to gain experience.

You will begin this mission after you have completed Earning Our Keep: You See What They Did. You will be eavesdropping for O'Brien once again. Go to the gas station west of Lost Lake. 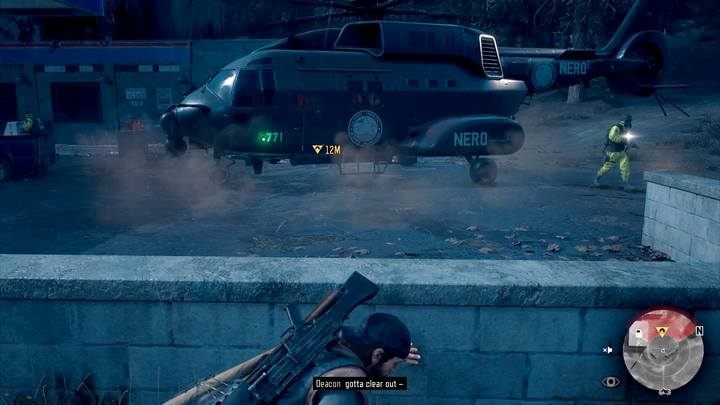 When the helicopter flies past, run to the wall and wait for the guards to leave. Mount the transmitter, then jump in through the window into the room adjacent to the one where the scientists sit and eavesdrop on them. 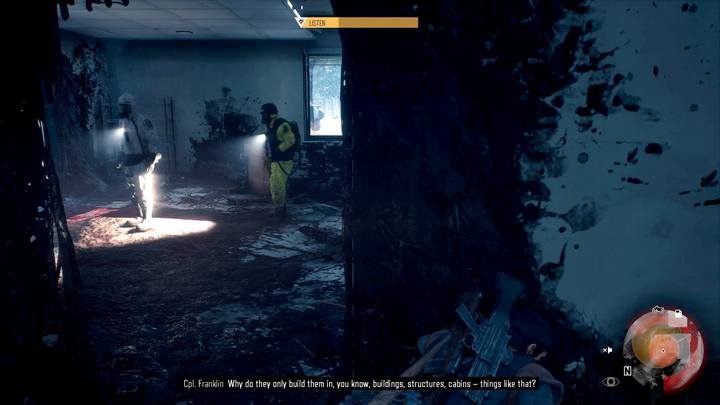 When they start to move, it's best to take the stairs to the roof. Secret: 4. Researcher Field Note - 2060.

The task will appear in the journal after the completion of the task from Rikki: I Got a Job for You / They Don't Like Visitors (Earning Our Keep). Wait until one of the guards passes behind the helicopter, then avoid him and mount the transmitter at the rear of the vehicle. 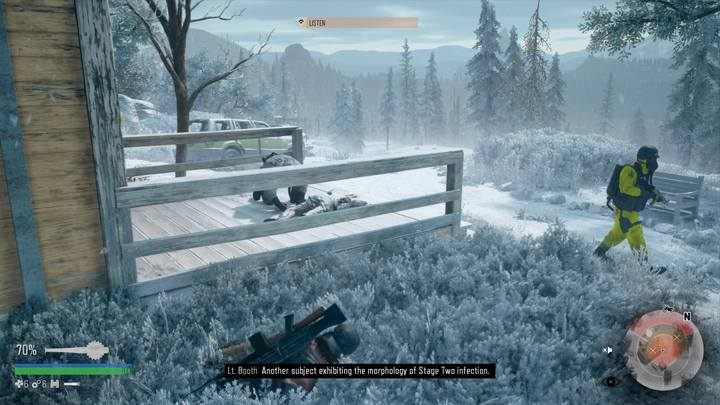 The scientist will later move to another place, going behind the house

Then go to the yellow house and listen in on the conversation while hiding in the bushes. Then, as usually, the scientists are going to move. In both cases, you can move the cars to the houses they enter so that you can listen to their conversations safely from the roof. Secret: 3. Researcher Field Note - 2068.

It's Been Crazy Here

The mission will begin immediately after the: You Could Have Done More (Surviving Isn't Living) storyline. Again, go to the Sarah memorial rock in the north-western part of Belknap. Do it early so that the mission is not lost (you do not want to lose free experience).

No Beginning and No End

Go to the Church in Marion Forks - Belknap, after the mission: You Could Have Done More (Surviving Isn't Living). You may encounter a sniper on the building opposite the Church. It is being devastated by Anarchists (6 people) - get rid of them. 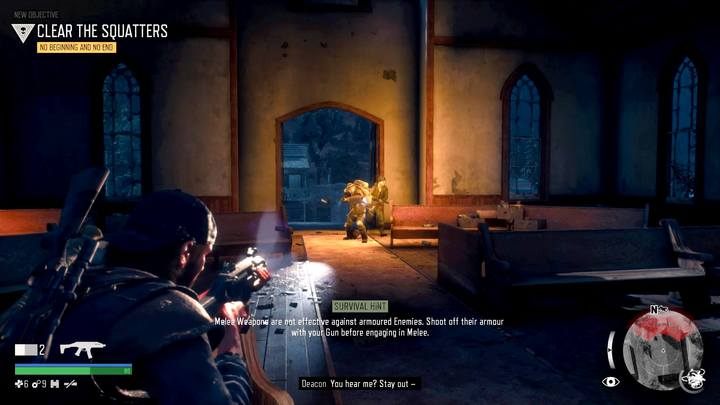 Beware of the armored enemy who will occupy the main entrance.

Cutscene will be interrupted by attack of the reinforcements. It's best to smoke them out with a grenade / Molotov cocktail when they start entering the Church because one of them is heavily armored and has a CKM. Now you will start the tasks: Something to Heal His Soul (Surviving Isn't Living) and Better To Light The Candle (Earning Our Keep).

This is another part of the story when Deacon visits Sarah's monument. Complete this mission first (or sometime after I Was Distracted). This way you won't miss important part of the story and chance to get a lot of experience points.

I Was Distracted / Why Am I Here?

This is a cutscene that you will unlock immediately after the Time For Some Payback (Keep Them Safe) mission. This leads to the following task with O'Brien: Why Am I Here?.

In this mission you only meet with O'Brien and still you can explore the area but soon... Check the Surviving Isn't Living: Riding Nomad Again mission.

It's the only reason I'm not crazy

Go back to Sarah's monument after the Why Am I Here? mission If you do not do this before the Surviving Isn't Living: Riding Nomad Again - you won't have the opportunity to complete this mission later.

Immediately after you travel with Iron Mike to Crater Lake (in the Again like Nomads (Surviving Isn't Living) mission)), this mission will begin automatically. Be careful though - once you get to the place, you will encounter a strong bear. His health bar can be seen at the top of the screen.

It's worth using explosives in this battle. If you do not have any, on the left of the car there is an explosive barrel, which will help you a little. Also: if you have the Executioner (Melee) ability, you can easily defeat the bear when you tap the triangle at the right moment after you are hit by the bear. Then go with the soldier to the camp. 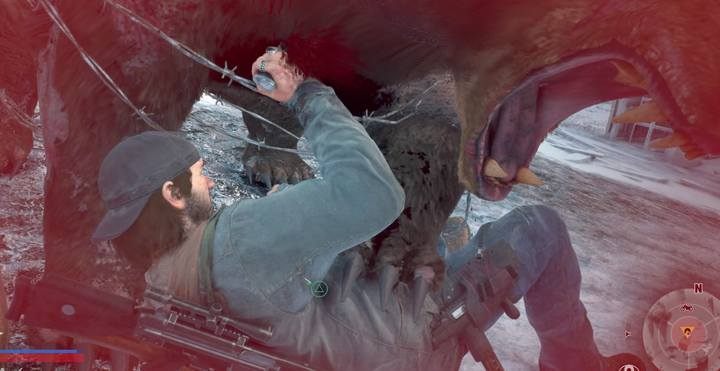 With the counterattack Executioner skill you can defeat the bear quite easily.

Here is the moment where Deacon gets introduced to the camp. Check out the items marked on the map after a conversation with commander Kouri. Then go with her on a motorcycle to the next objective. Here you will begin the mission of a new storyline: A Good Soldier.

A War We Can Win

After the cut-scene ends, go talk to Col. Garret. The mission takes about 10 minutes. However, each fragment can be skipped, including the dialogue - you won't have to explore the area. At this point, you finish A Good Soldier plotline and unlock the recipe for Healing Cocktail. You now start We Will Take Back This World (A Good Soldier) mission.