Days Gone starts with a short introduction. Every part of the story and every mission are recorded in the journal. This chapter focuses on the first, and the shortest, plotline - Chasing Leon.

He Can't Be Far 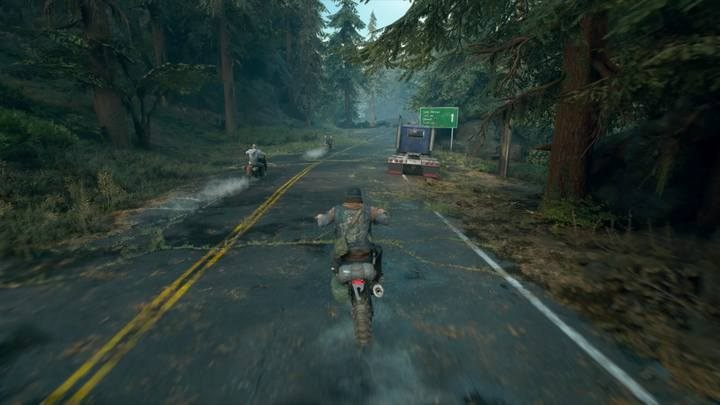 You still have your bike in the prologue...

Follow the target; press the Square to use nitrous. When you are moving on foot, press X to go over obstacles such as fences. 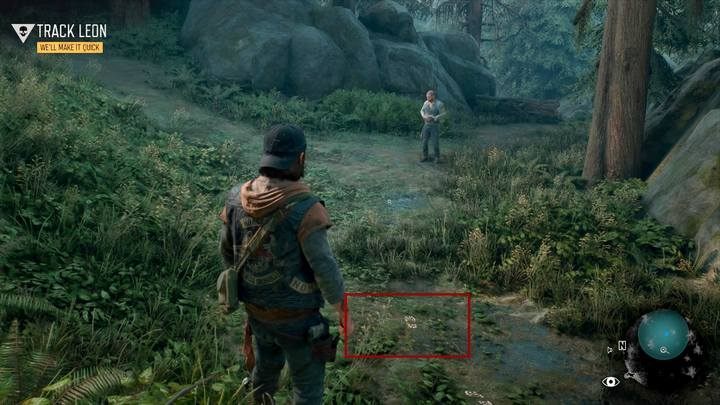 Survival Vision reveals hidden tracks and items around you.

Survival Vision is very important (activate it by pressing R3). You will be using it in many missions to locate next objectives by following tracks. Hold the right analog stick to activate Survival Vision. This mode also highlights nearby items and chests.

When you catch the target, you will receive a map - this is the first secret (1. Leon - "Sketch of Angel Sculpture"). Open the game's menu to check the secrets. This one will show you where you can find a treasure near a statue at the cemetery. 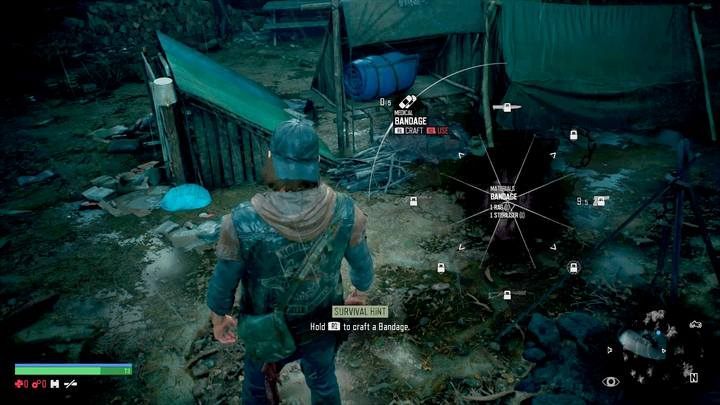 Pick up the crafting materials from which you can craft bandages.

Go back to the camp: pick up the Steriliser lying near the tent and the Rag lying in the center of the camp. Next, craft a Bandage - press L1, tilt the right analog stick to the upper left corner and hold R1. Use the Bandage - hold R2 instead of R1. From now on you can sprint by pressing the left analog stick.

I Say We Head North

Time to learn how to fight at a close distance - keep pressing the button displayed on the screen to escape from the grapple (these attacks can be deadly). Press R2 and move the left analog stick towards the enemy to attack. 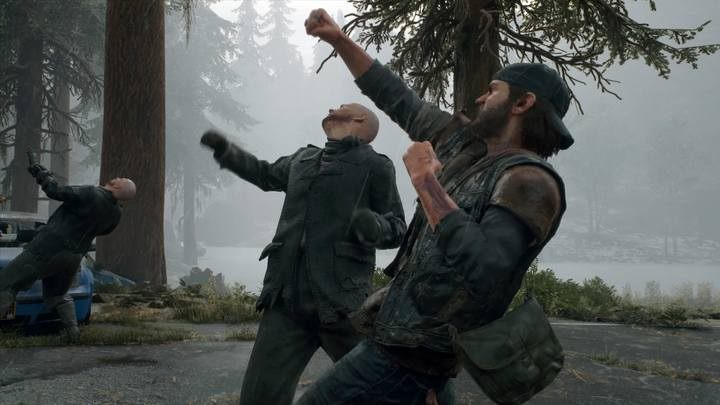 Later, Deacon will get access to a knife and other melee weapons.

Eliminate Freakers in the nearby tunnel: shoot them (L2 aims; R2 shoots) or use a melee weapon. Press the Square to reload. Every defeated Freaker drops a Bounty - collect it by walking over their corpses. You need them to get credits and Trust in encampments. 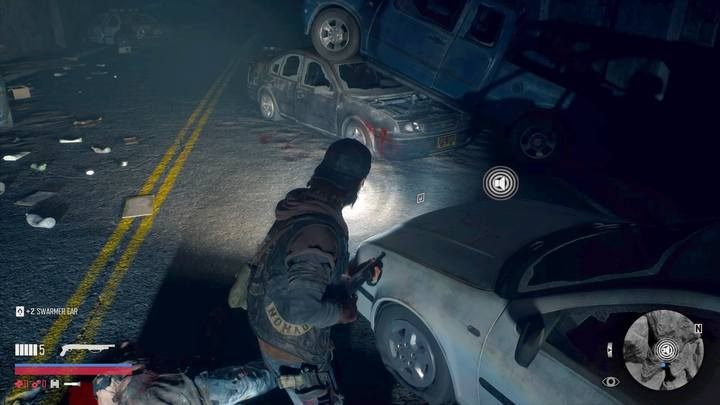 The alarm icon is also presented on the radar.

Some cars can have an active alarm - it can activate when you hit/shoot them or when you try to open the hood or the trunk (look for a red lamp inside the car). If you activate an alarm, it will attract nearby enemies. You can turn it off by lifting up the hood (this is also a good chance to find Scrap). Go to the side corridor. Crafting materials for a bandage are on the left. Move the car located behind the corridor (hold the Square button). 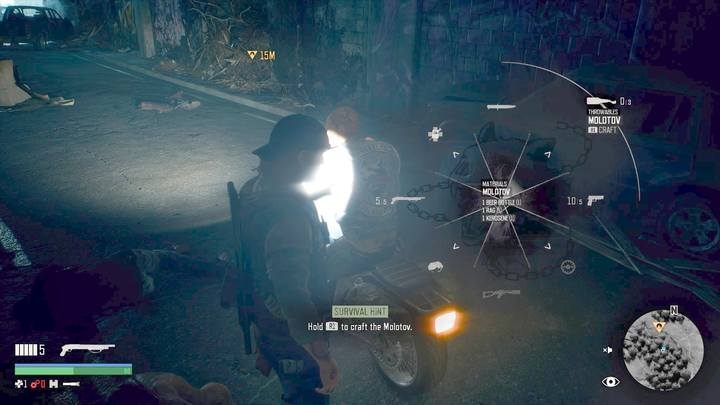 Eliminate more enemies. Once you are done, Deacon will find a nest. One of the side activities is about destroying similar nests. You need something flammable, e.g. a Molotov cocktail. Go to the bike and take out the crafting materials. Open the Survival Wheel and craft a Molotov cocktail. Prepare your weapon - enemies always charge at you after you burn down their nest. 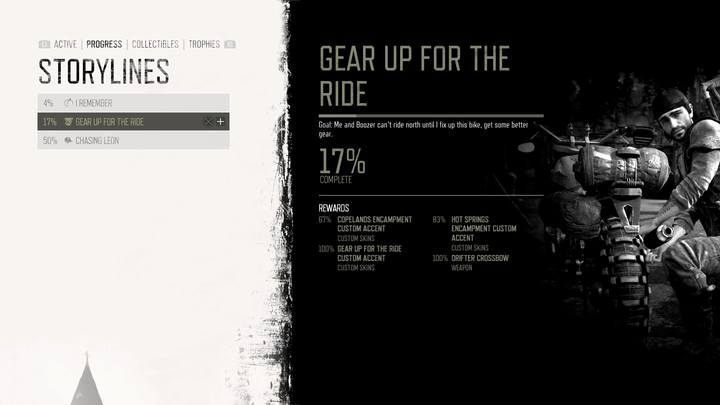 Some plotlines intertwine which means that you can have troubles with tracking them in your Journal.

Time to test your skills - you have to reach the station and find parts for your bike. This starts Gear Up For the Ride, He's My Brother and I Remember plotlines.

Tip: you can take out an Infestation Nest (one of the side activities) by burning down a Freakers' nest with a Molotov cocktail. This, however, can be too difficult for you now. The next missions that are part of this plotline (She Rode With Us) will appear much later. The next part has been described in Bad Way to go Out (Gear Up For the Ride).

Out of Nowhere / She Rode With Us

You unlock this mission after completing Smoke on the Mountain (He's My Brother) and No Starving Patriots (Gear Up For the Ride). 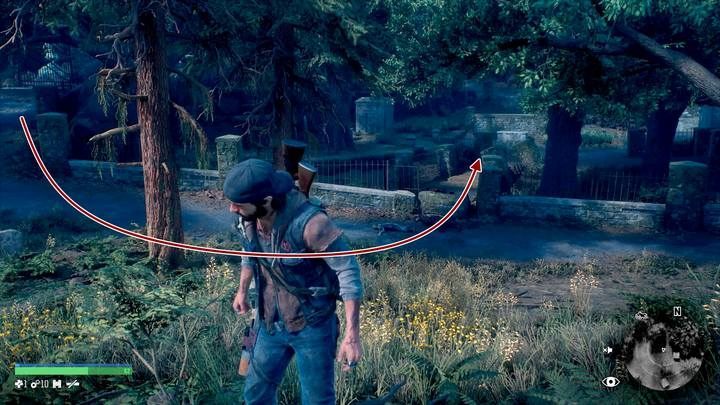 Go to the cemetery located in the north-east part of the map. Once you get there, your bike will be locked. Enter the cemetery and go left. Jump over the wall. A crowbar lies in front of the statue - examine it. The tracks are leading to the nearby grave. Go there, and you will find a chest. Take the chest to the bike and attach it on the back. Follow the quest marker to another mission objective. 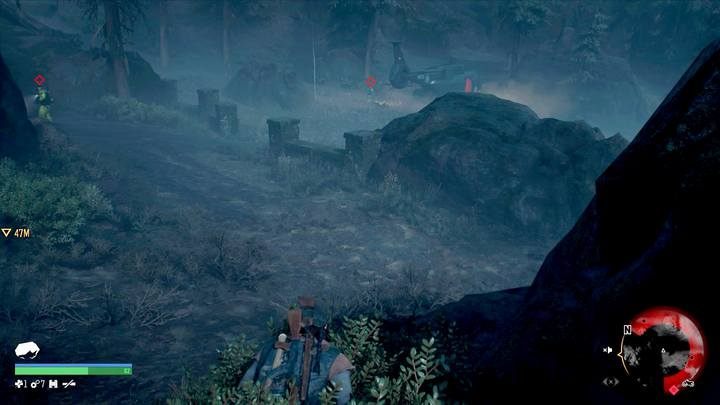 Hide behind rocks and inside shrubs to stay undetected. You can also mark enemies by using the binoculars.

Enemies in the yellow suits are invulnerable to all types of attacks, including stealth takedowns. Use the binoculars to mark the enemies. Stick to the rocks and go left to avoid the hostiles. Hide in shrubs. Remember that you can throw stones to distract enemies. 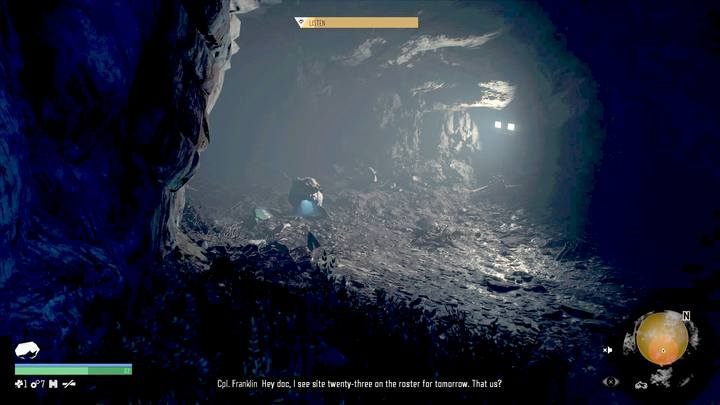 Approach the cave and hide in shrubs. Get closer to the crouching scientist to eavesdrop the conversation - the bar at the top of the screen will soon get full. Follow the same path to reach the bike.

Go back to the statue in front of the cemetery - you will find a woman's corpse. Examine the track and then burn the body (use, e.g. a Molotov cocktail).

Price on Your Head

You start this mission after completing the part where you had to eavesdrop a NERO agent (part of She Rode With Us / Out of Nowhere). This mission takes place in a different region. You can still go back to the starting region but not necessary by using fast travel - your bike's gas tank is small meaning that you might have problems with traveling long distances. 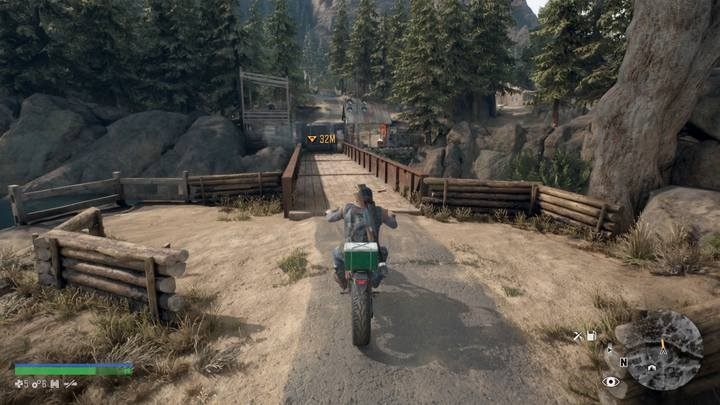 Reach the encampment by following the only path leading through the bridge.

Go west to Belknap. You reach a new camp - Hot Springs led by Tucker. It is worth going here relatively quickly - one of the main reasons are the things offered by this camp: new weapons and numerous activities for which you will be rewarded with credits and Trust points in this camp. 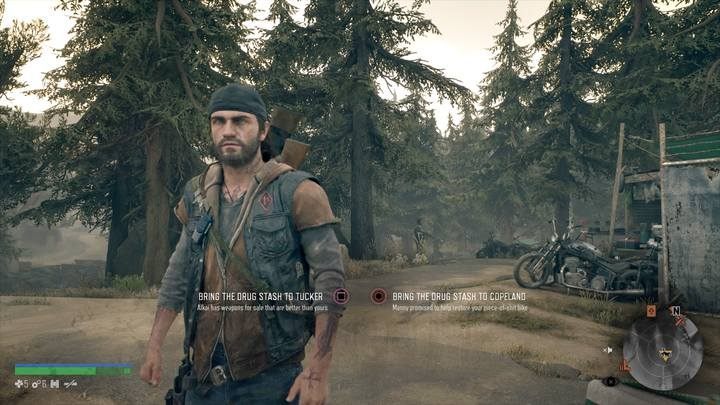 Soon you will make a decision that will affect the further game. Leon's chest, the one you found at the cemetery, can be given to: