This section of Days Gone guide includes the description of two huge bear fights which serve as boss fights. Deacon encounters bears in two story missions. Our description contains useful tips on how to effectively weaken the bear to finally kill him.

The bear from the Lots of Sick People mission 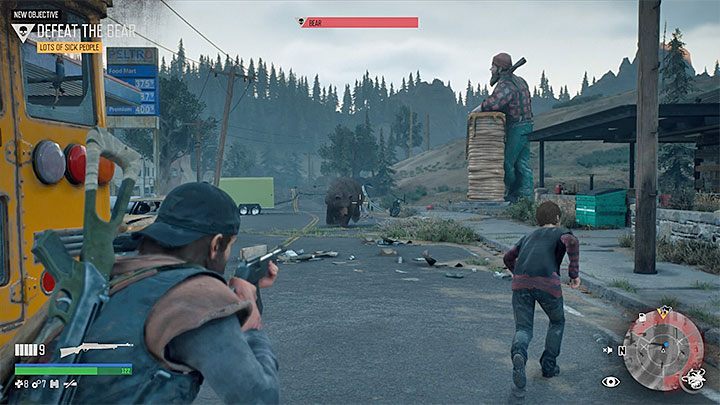 You're going to encounter the bear for the first time during the final part of the mission called Lots of Sick People. Let's remind that Deacon must find a girl named Lisa as an objective in this particular mission. Bear appears when on the way back to the motorcycle Deacon and Lisa will be in the vicinity of the gas station. The animal is considered as the boss - the bear's health indicator will appear at the top of the screen.

You don't have to worry about Lisa during your battle with the bear. She will hide in one of the containers immediately after the start of the fight.

Preparing to fight with the bear 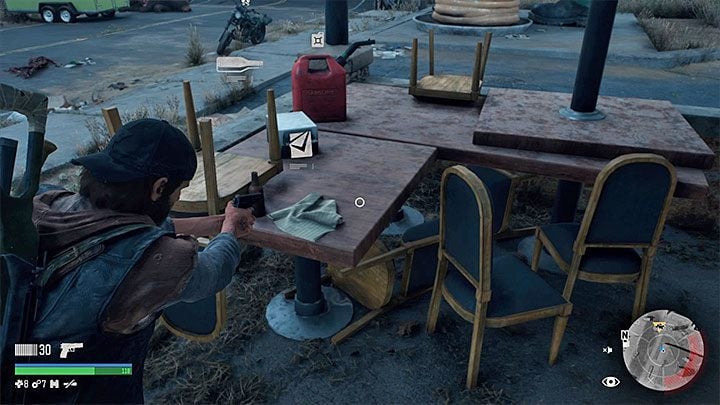 It would be good to prepare for the duel with the bear before you get to the vicinity of the gas station. Look for buildings along the way where you can find ammo or crafting components. Try to produce as many Molotov cocktails as possible.

Before you start fighting the bear, you should also kill the Freakers from the city, so that these monsters may prevent you from killing the bear.

Duel with the bear - description 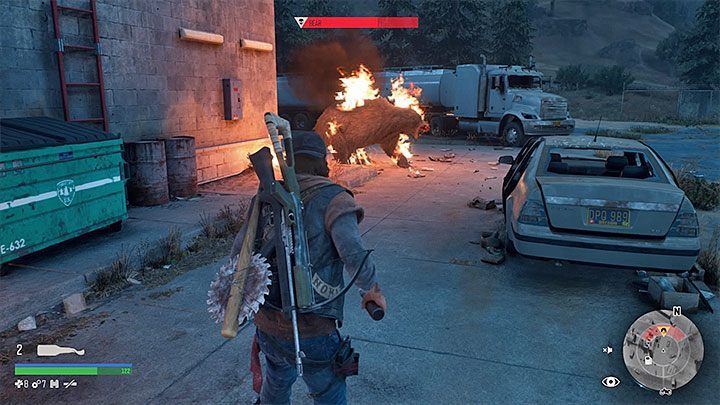 It's best to start the duel with the bear by throwing a Molotov cocktail. The bear will be set on fire, and it receive some damage-over-time. Use another cocktails after the bear stops burning. 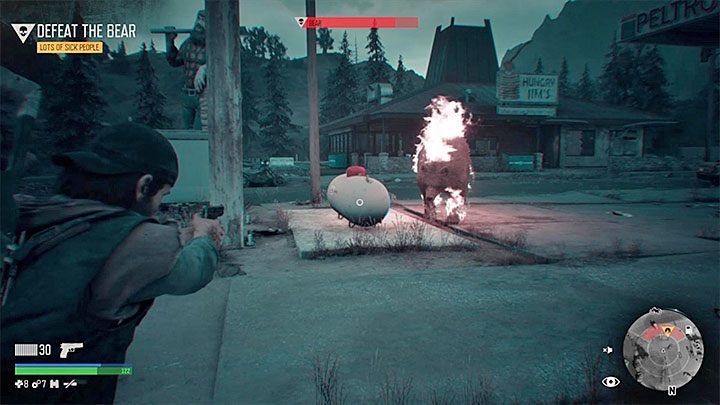 Even better way to weaken the enemy is to stand near the big white container shown in the image. Wait till bear will get in close proximity of the container (e.g., after it starts charging at Deacon) and blow up the tank. 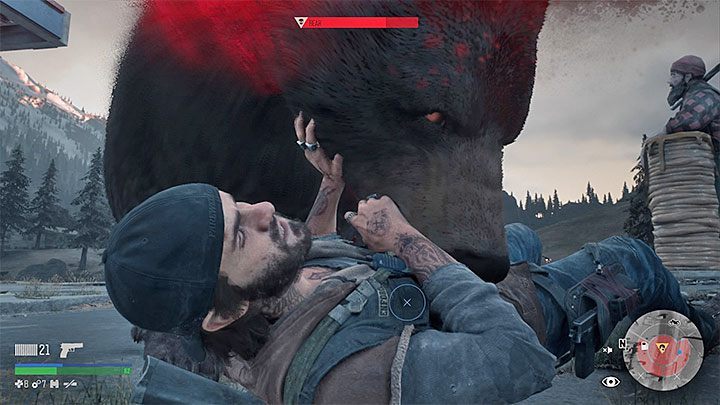 During the fight, try to keep the bear at a distance, especially since the animal can knock Deacon to the ground - then quickly press the specified button to release. Of course, you can use explosives and firearms to attack the boss.

Deacon can hide from the bear by running into buildings with a small door (the garage adjacent to the gas station is not a sufficient shelter). You can also attack a bear, for example, from the roof or balcony of any of the buildings. Do not climb on the car or other small obstacles, because the bear can get there.

Further encounters with bears in later parts of the game 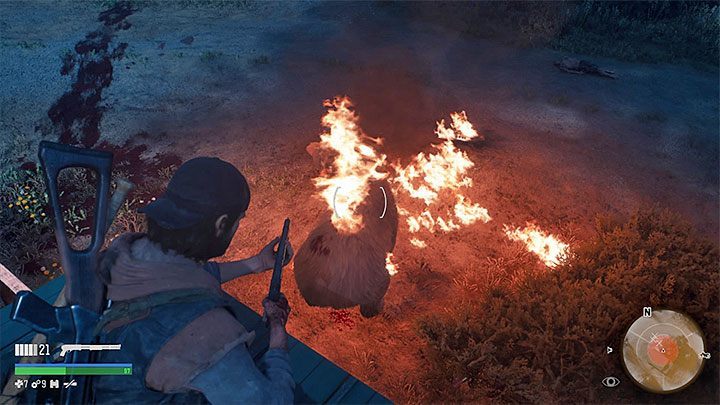 Bears can also occur in further parts of the game but they will not have any special health bars. Fighting with them is then completely optional, but by killing them, you can get a lot of experience points and valuable meat. Molotov cocktails that can set bear on fire for about 10 seconds are very useful in every confrontation. Also, it's good to look for opportunities to attack bears from balconies, building roofs, etc. In such circumstances animals cannot protect themselves. 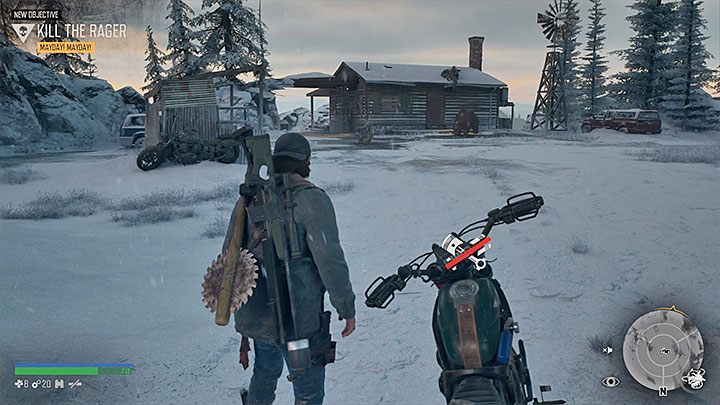 You encounter the second boss later on during the story campaign as Deacon reaches Crater Lake for the first time. He will a radio cry for help and the Mayday! Mayday! Story mission will be initiated.

You have to reach the chalet shown in the screenshot. Inside it, you will encounter two men fending off a strong mutated Rager Bear. Upon approaching it, you will trigger the boss fight and the bear's health bar will appear on the screen. 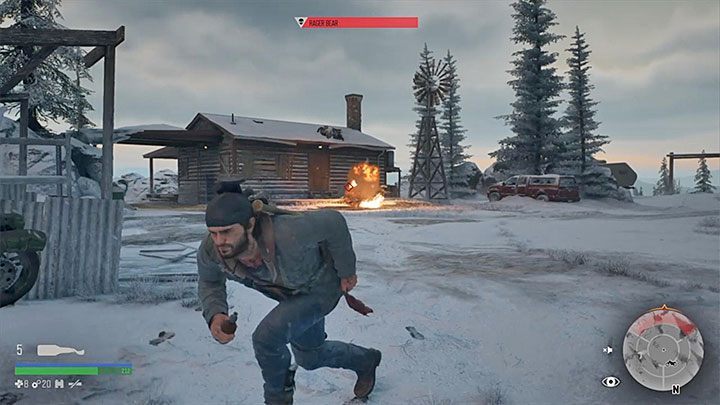 In general, the strategy that has to be implemented when fighting Rager Bear is similar to the one you had to use when fighting the creature at the gas station. Firstly, it's best to set the bear on fire - you might do that with Molotovs. 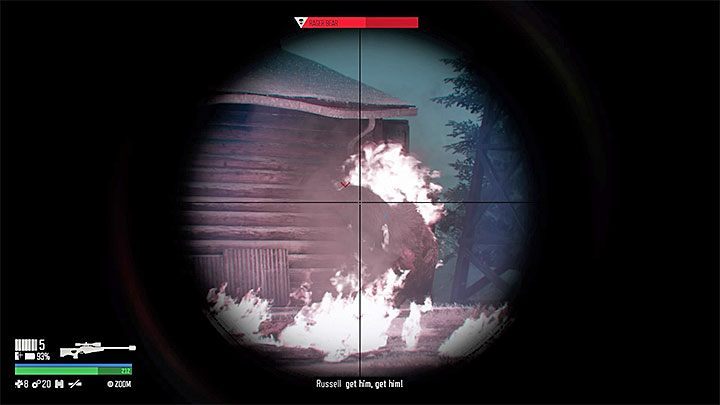 Before you're spotted by the bear, you can optionally prepare yourself for the upcoming battle. Try setting a trap between you and the bear (best a proximity bomb) or use the sniper rifle to deal critical damage, which might take half of the bear's life. 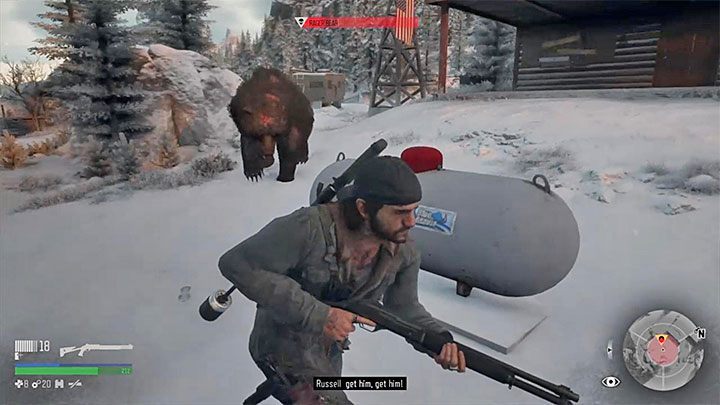 During the fight, run as much as possible and do not allow the bear to get near Deason so that he does not bite or knock him down. There are several explosive objects - the most "interesting" one is the white canister in the back of the chalet (shown in the screenshot). Detonate it as the bear runs past it to deal a lot of damage.