On this page of the Days Gone game guide, we have included the most important skills for you to unlock in the initial phases of the campaign. We have only taken into account the abilities that will make the beginning of the game much easier. You can find a complete list of all skills on a separate page of this chapter.

For the needs of this list we chose skills from levels 1-3. In order to advance to each successive level, you will, unfortunately, need to unlock two (any) previous skills. 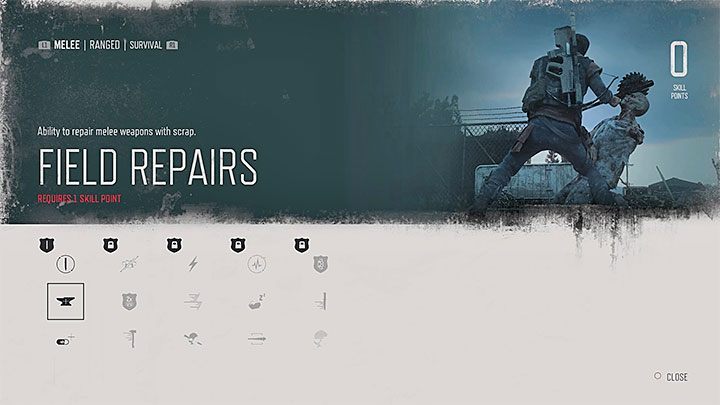 Field Repairs - This skill allows you to repair melee weapons with Scrap. This is extremely useful, especially if you have upgraded a weapon through crafting. By default, a decrease in the durability of a melee weapon to 0% results in its irretrievable loss. Thanks to this particular skill, you can repair your weapon and continue using it. Remember, however, to constantly keep an eye on the durability bar (in the bottom left corner of the screen), so that it does not approach the level of 0 percent. 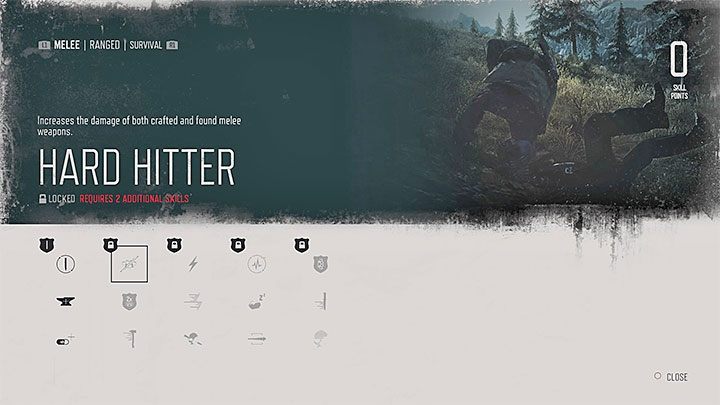 Hard Hitter - This skill increases damage dealt by melee weapons (those looted and created through crafting). The bonus damage is very useful. Thanks to this increase, you can deal with the opponents you encounter much faster, and you will also go through the durability of your melee weapons slower, as the number of necessary strikes to kill an enemy will go down. 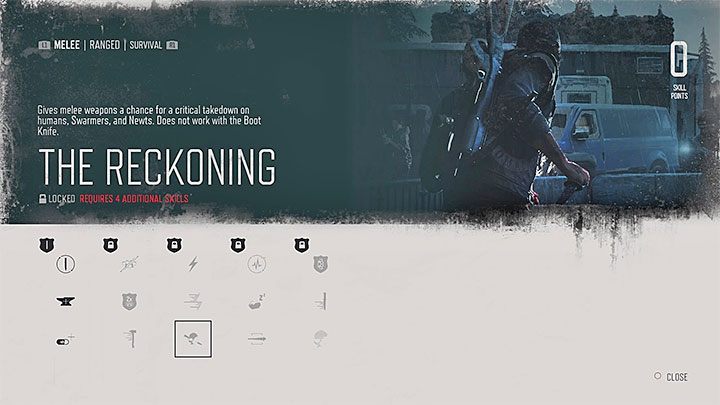 The Reckoning - This skill gives you the chance to perform a critical takedown on humans, Swarmers, and Newts while using melee weapons. This is another ability that significantly increases the usefulness of melee weapons and their effectiveness in getting rid of enemies. Remember, however, that the critical damage applies to "standard" enemies. This will not work on more powerful monsters. 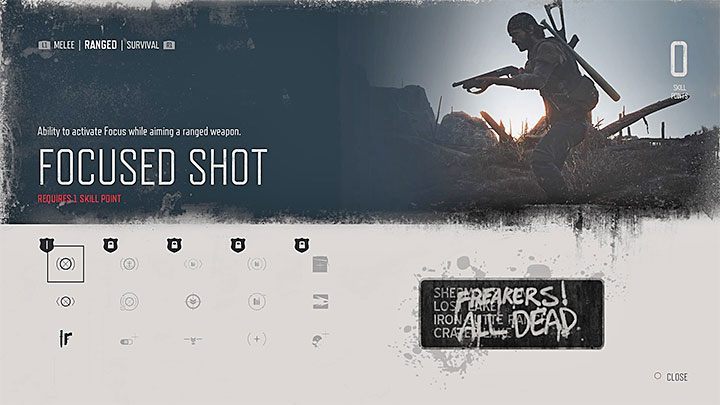 Focused Shot - This skill slows down the time while you aim. This is a very important and a very useful ability. After its use, the flow of time will remain slowed down until the small focus bar is completely exhausted. The best use of this skill is targeting the heads of your opponents while the slow-motion mode is active. You can kill all standard enemies with a single hit this way. 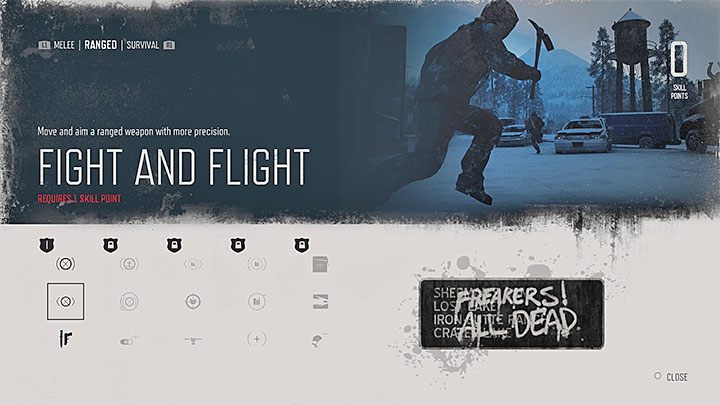 Fight and Flight - This skill provides greater precision while simultaneously moving around and aiming with ranged weapons. You will appreciate it as long as you do not have a very careful playstyle which revolves around firing at enemies without breaking cover. The precision boost is especially useful during fights against Freakers, because the monsters do not allow you to continue firing at them from behind cover, and force you to adopt a bolder approach. 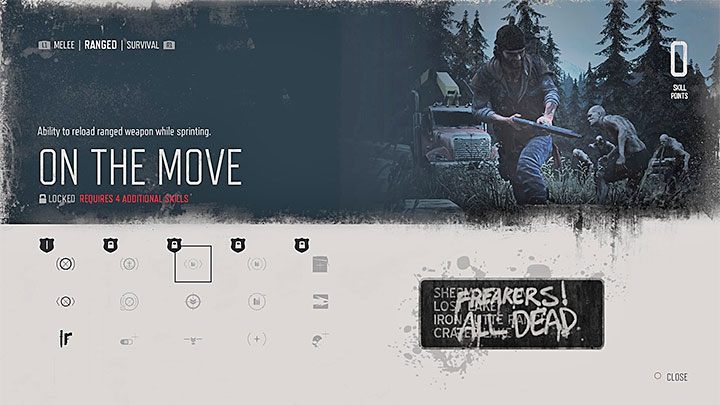 On the Move - This ability allows you to reload your weapon while sprinting. You will appreciate this feature especially during skirmishes against monsters and when fighting a Horde. The standard running speed may not be enough then, and you will not have to slow down in order to continuously fire your weapon. 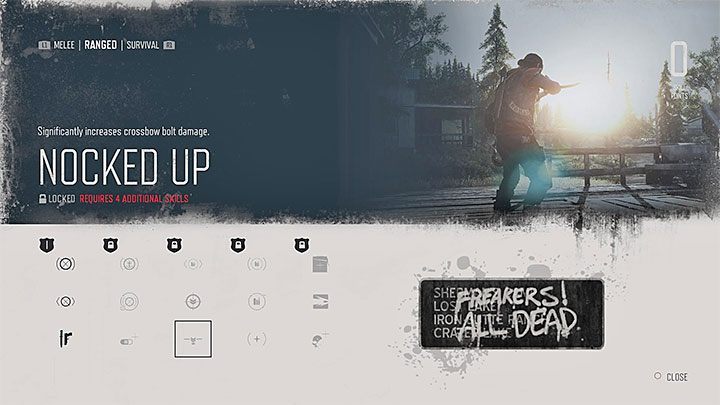 Nocked Up - This skill can significantly increase the damage dealt by crossbow bolts. Unlock it only if the crossbow is your preferred special weapon. In our opinion, it works well at the beginning of the game. Increased damage is very useful for less precise shots, that will not hit an enemy in the head, but in another part of the body. 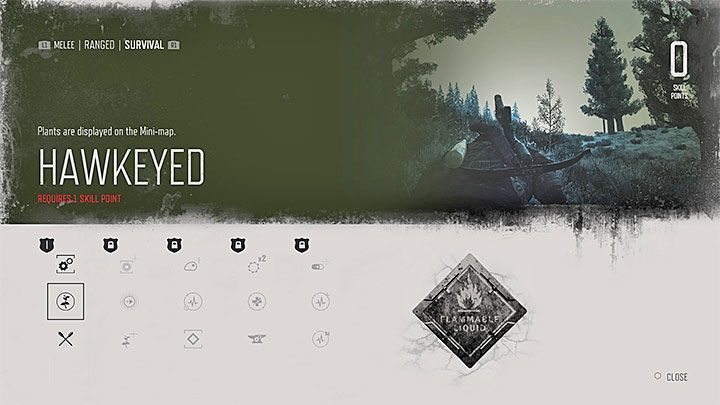 Hawkeyed - This skill causes plants to be displayed on the minimap. It is worth unlocking because some species of plants are associated with the production of important single-use items, such as e.g. crossbow bolts. 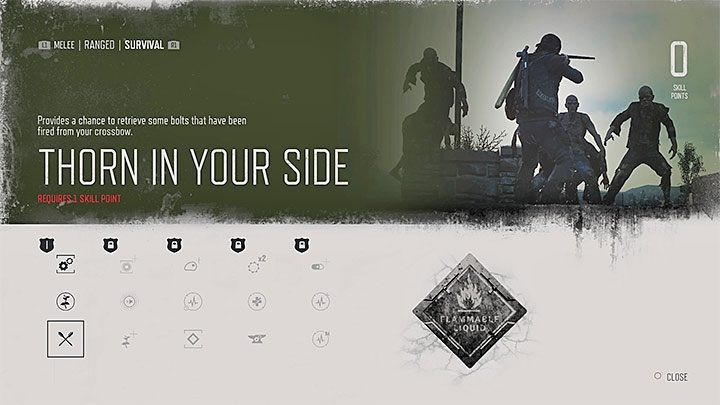 Thorn In Your Side - This skill gives you the chance to recover some of the bolts shot from the crossbow. Just like in the case of the Nocked Up skill, you should only decide to unlock this ability if you regularly rely on the crossbow. You will no longer have to constantly look for saplings, thanks to which you can get materials for crafting bolts. 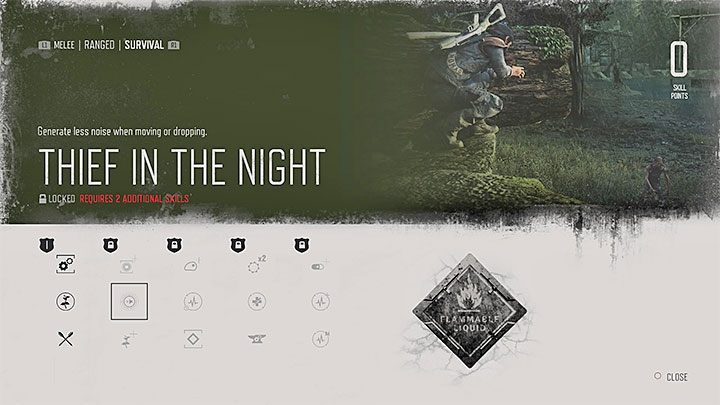 Thief in the Night - This skill reduces the amount of noise generated by moving and falling. This is a very useful ability that will help you in your more subtle endeavours. You will appreciate it, especially when you are confronted with Freakers because the monsters are more sensitive to the sounds of the environment than people. 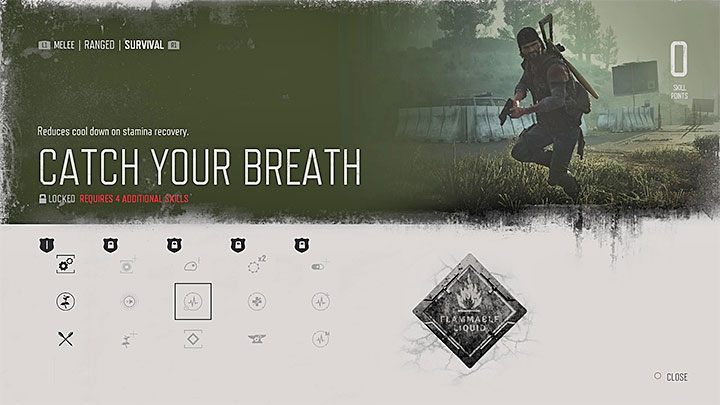 Catch Your Breath - This skill reduces the cooldown on stamina regeneration. This passive ability will prove especially useful in all those situations in which you perform numerous activities that consume stamina. This is hugely important during battles against monsters, when it may be necessary, e.g. to sprint for a long time.