This page of our Darksiders 3 guide contains a walkthrough for Forgotten Lake. Fury has to solve four different riddles. Fortunately, our walkthrough describes each of the puzzles, step by step.

Forgotten Lake is the first stop in The Depths. Part of the area is underwater so you will have to use the force hollow to be able to move on the bottom. As you move underwater, watch out for mines that, while seemingly stationary, will move in your direction as soon as you get in their range. Remember that with the hammer can be used not only in battle but also to break down walls and other elements of the environment. You'll also find some puzzles to solve, hidden items and additional side bosses to kill. 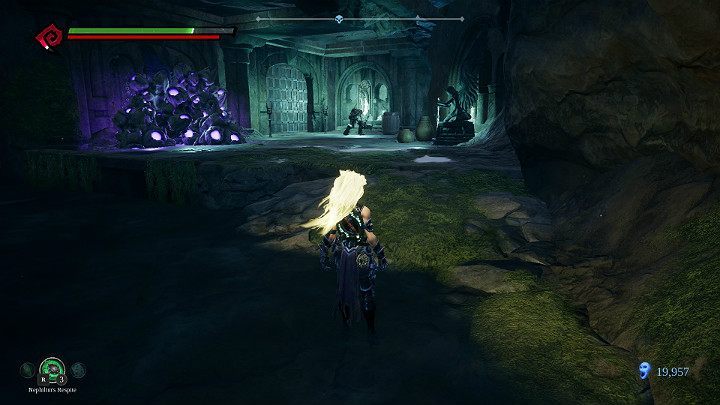 To enter Forgotten Lake, you have to solve a puzzle. On the left, behind the purple wall, there is a hidden statue. First of all, defeat your opponent and smash the obstacle blocking access to the statue. 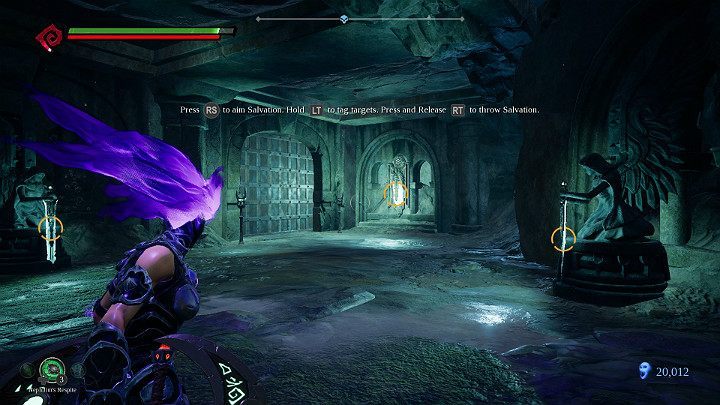 Stand in a spot where you will have access to all the items marked in the picture above. Use Salvation to select 3 targets and then throw the weapon. After a short while, the entrance to Forgotten Lake will open. 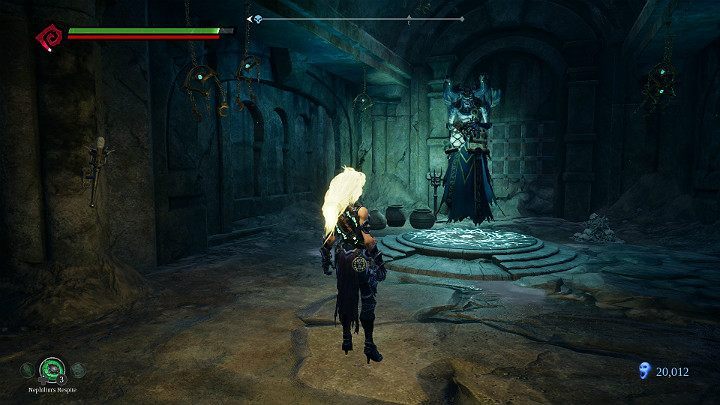 In the first place, it is worth to mark the checkpoint and take care of the collected souls, strengthen the weapon or assign any leftover Attribute points. Once you've done all the work, immerse yourself in the water and start exploring.

Puzzle 2 - Templar of the Damned and Essence of a Chosen

The Templar of the Damned is one of the chosen, additional Bosses in Darksiders 3. For defeating it you can receive the Essence of a Chosen. If you feel up to it, you can battle this powerful opponent. 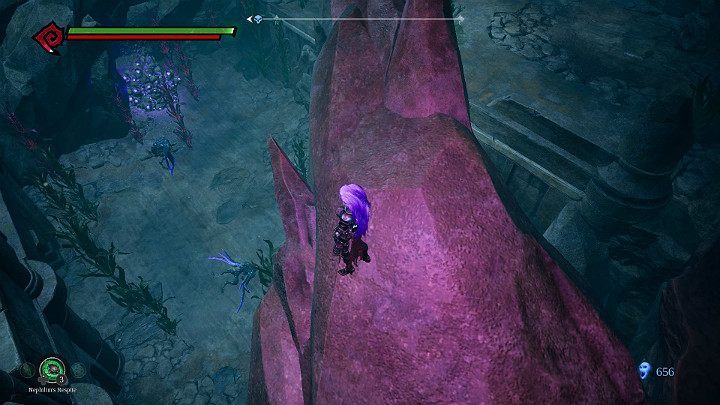 The entrance to the underwater room from which you will have access to the chamber of the Templar of the Damned is located on the left. The entrance is defended by two water creatures that you need to defeat using the hammer. 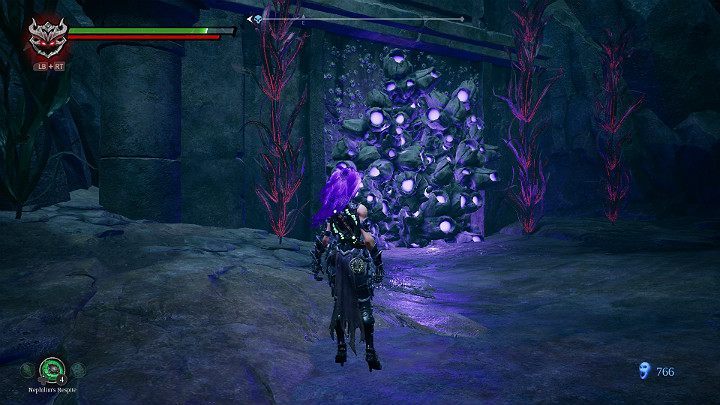 Break the wall to proceed to the puzzle. 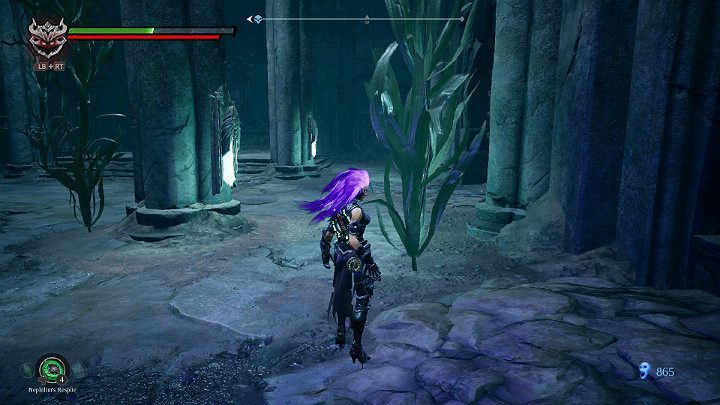 There are two crystals on the pillars, which you have to hit almost simultaneously to open the gate. Go into aiming mode and mark both targets. Then throw Salvation to activate the crystals. 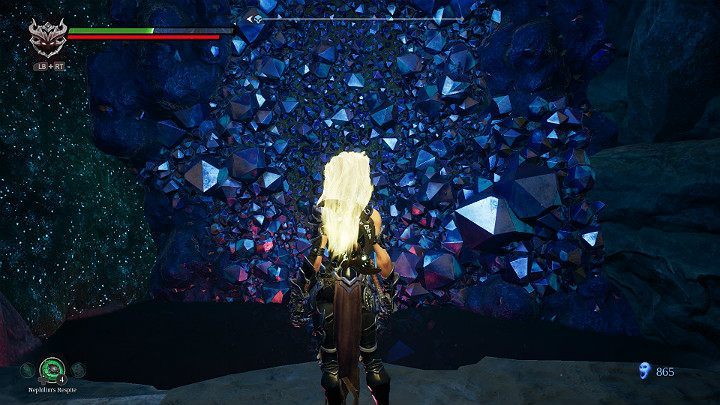 Use the essence of strength to stick to the wall and move all the way to the top. 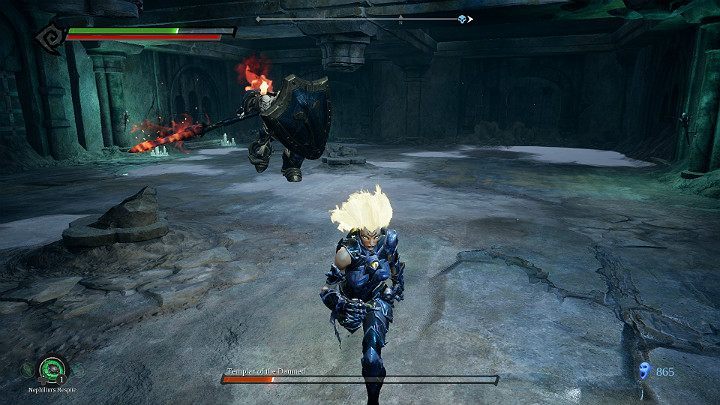 You will find yourself in a room where you will be forced to fight the Templar of the Damned. Your opponent has a spear capable of executing far-reaching swings and stabs. What's more, he often protects himself with a shield, so the only opportunity to hit this opponent is to execute a quick counter after a perfect dodge. For defeating the Templar of the Damned, you will receive the Essence of a Chosen.

Puzzle 3 - how to get the first sword and open the gate?

To advance to the next stage of your journey through Forgotten Lake in Darksiders 3, you will be forced to open a gate. Before you do this, you'll have to find the missing sword. Below you will find detailed instructions on how to do this. 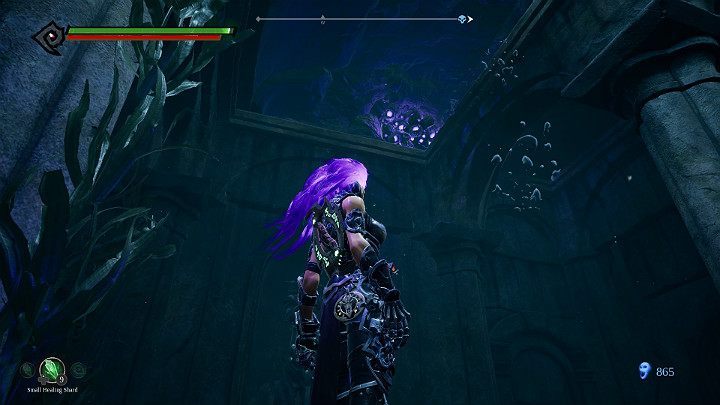 When you dive into the water, look for the passage shown in the picture above. It is located near the entrance to the puzzle leading to the Templar of the Damned. Break the purple wall with a hammer and move forward. 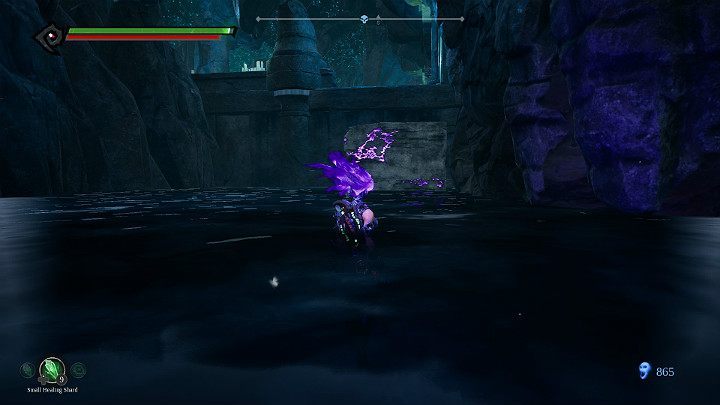 Use the hammer's power attack to move the rock closer to the balcony, and climb it. 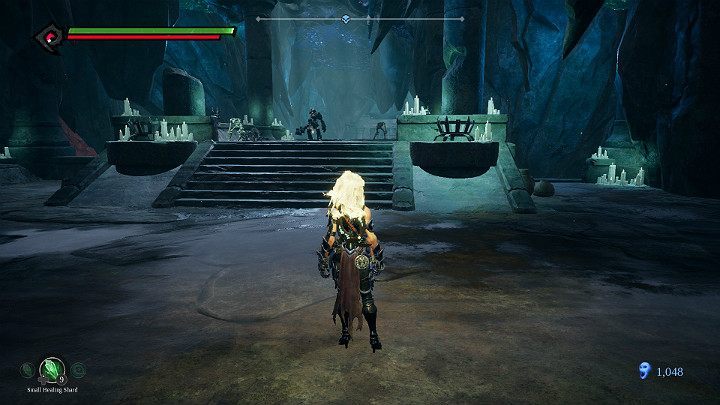 You will have to defeat one stronger enemy and several mobs. 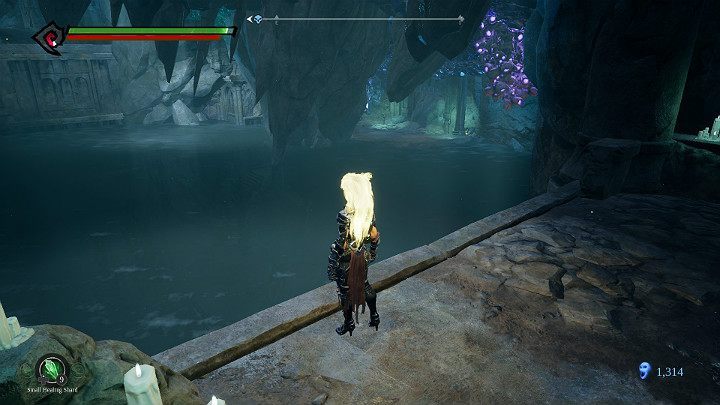 Now, you'll need to reach the piece of land visible to the right. 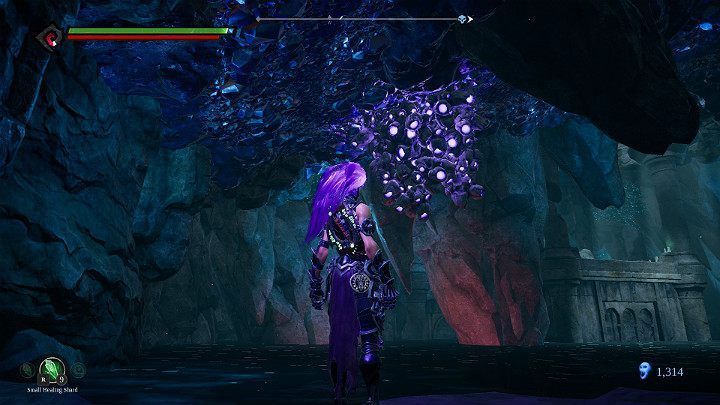 Use the force hollow and Salvation to break the obstacle under the ceiling. 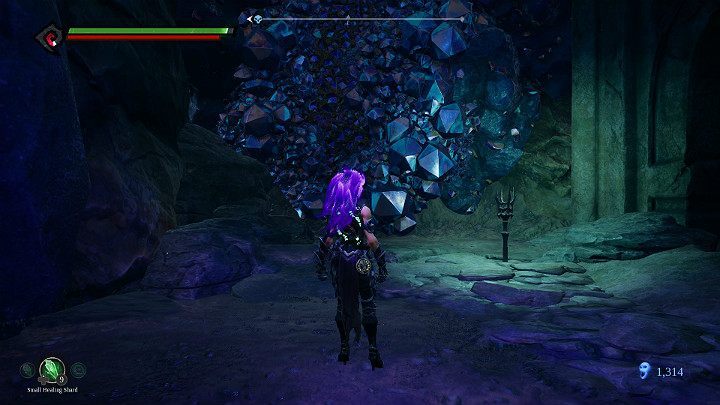 Use the hollow to jump on the wall and follow the path. 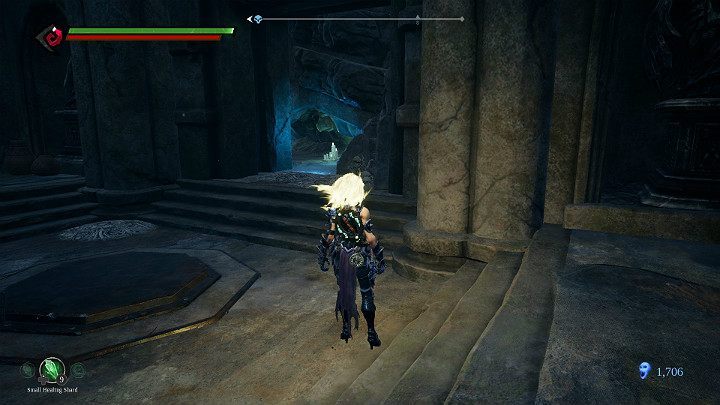 Break the obstacles blocking the corridor and enter. 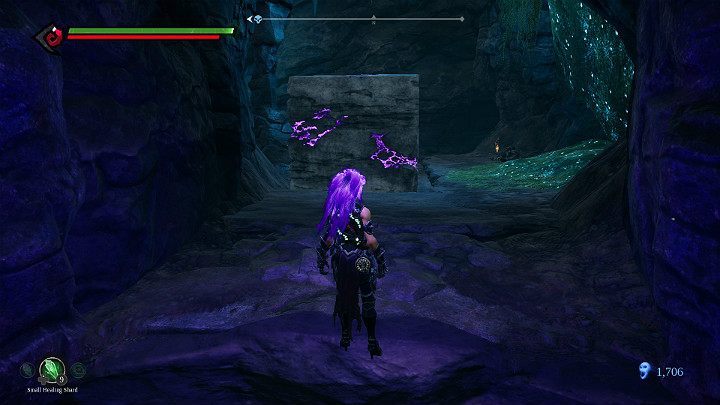 Your task now is to move the rock cube into the previous room. Use the hammer. 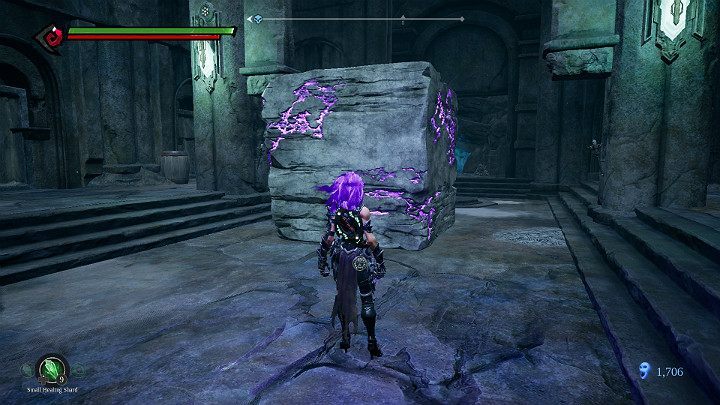 Place the cube on a switch to reveal the crystal in the recess visible above on the other side of the room. 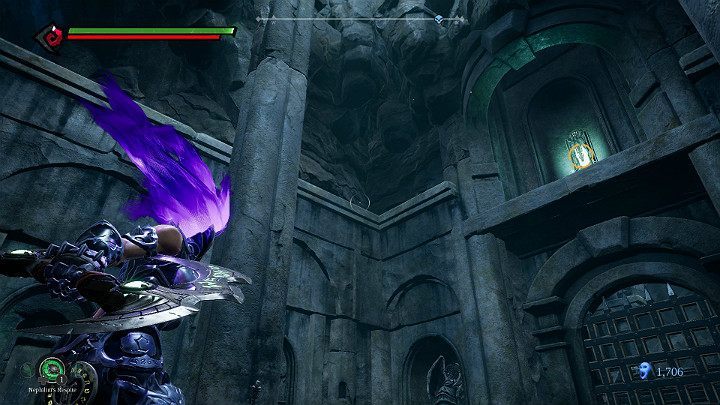 Position yourself more or less at the center of the room, then mark the upper crystal and the two located on the pillars behind your back. 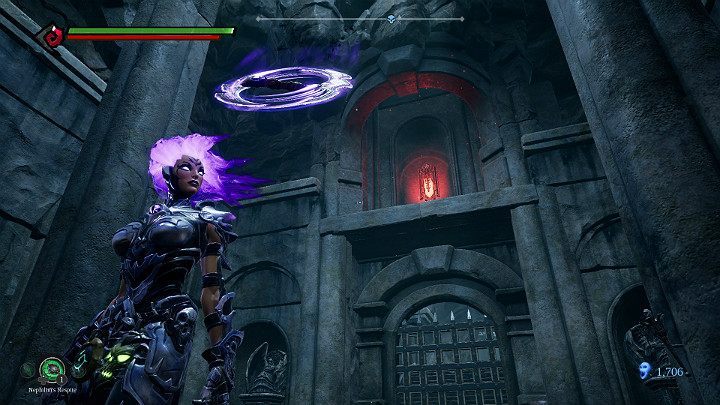 The weapon will hit all the crystals and open the gate. 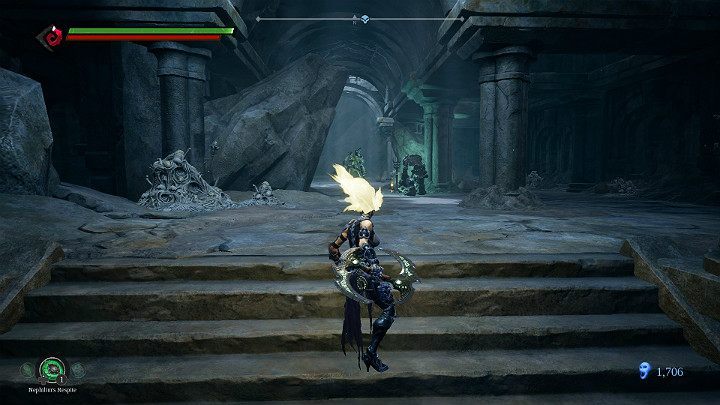 Before you get the sword, you'll have to face some enemies. Don't forget to collect the additional items located in the room. 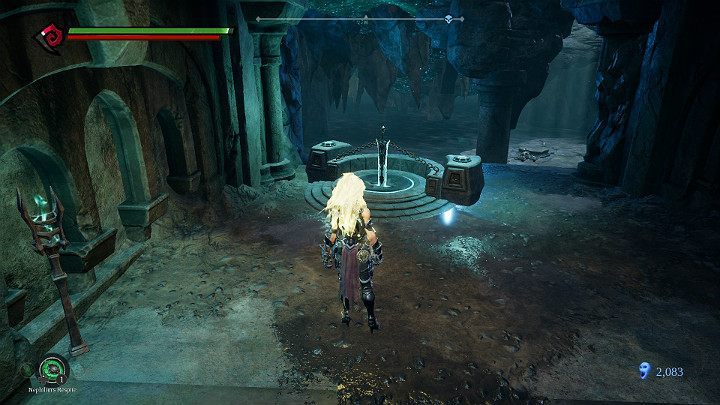 The sword is located to the left. Take it, and jump to the gate on the right, 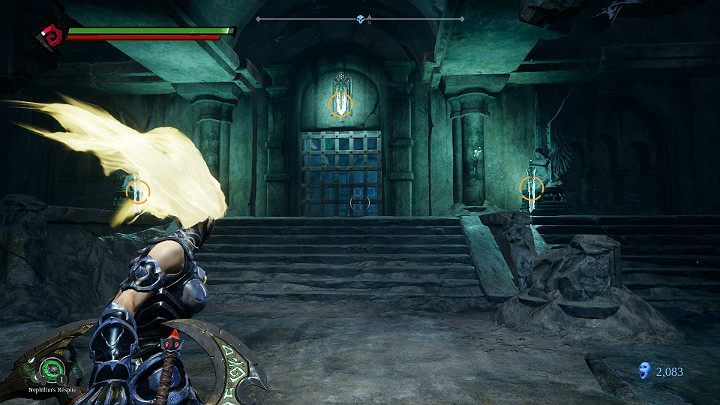 Place the sword in the statue on the left, then jump back and mark the 3 targets visible on the picture above. 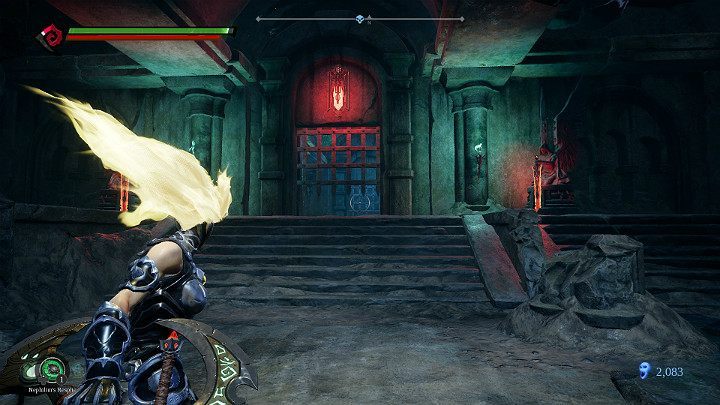 When you hit all the targets in quick succession, the entrance to the next part of Forgotten Lake will be opened.

To save the first man in The Depths you will have to solve a puzzle with two moving blocks. Below you will find detailed instructions on how to do this. 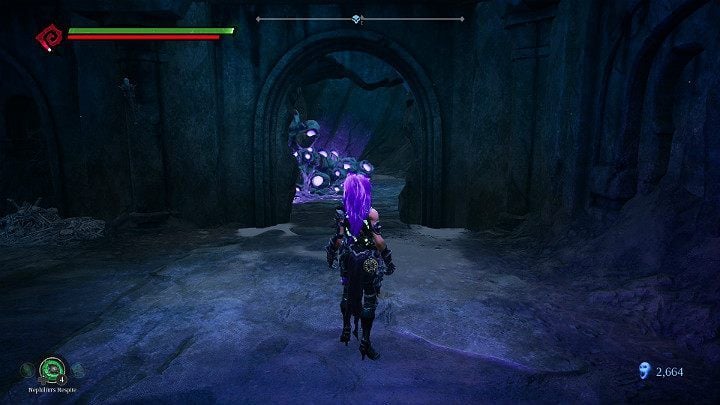 The way leading to the next puzzle is located right behind this wall. Jump into the water and swim forward. Watch out for the enemies that swim nearby. 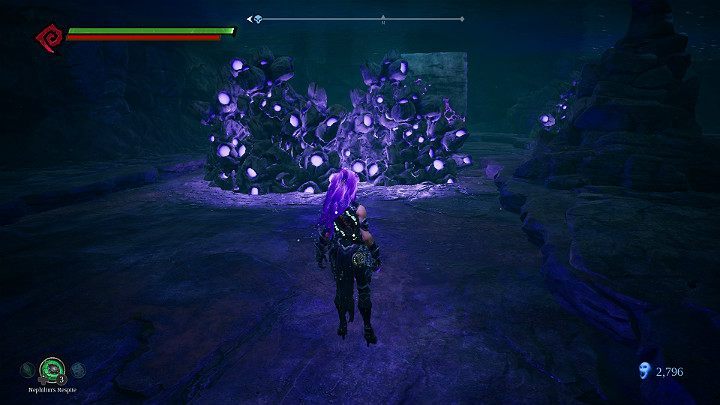 The first step to solve this puzzle is to destroy the obstacles located on the "road" of the rocks. 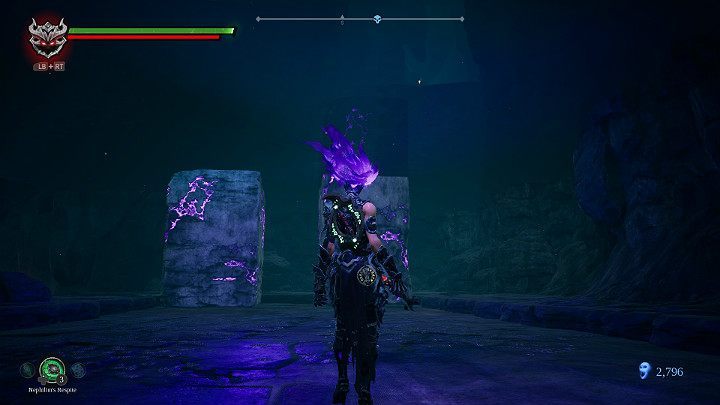 Use the hammer to move the rocks and place them as shown in the picture above. 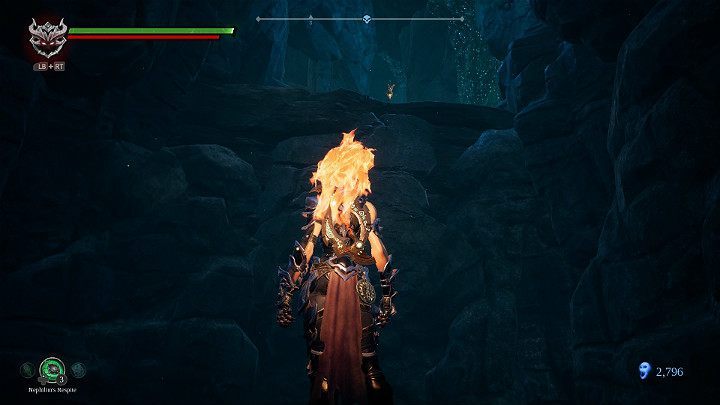 Use the flame hollow to jump on the rock shelf. 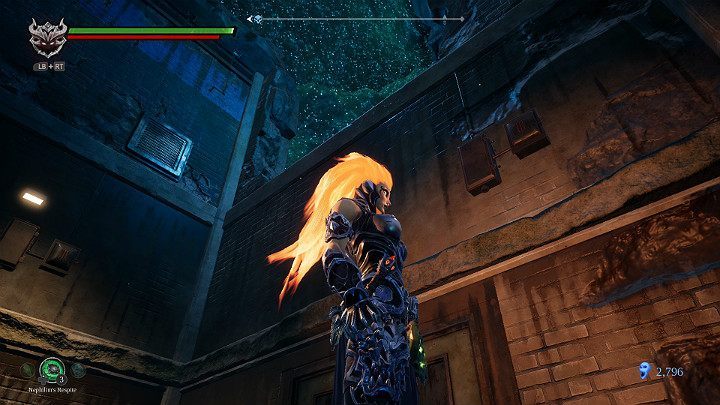 When you hear the voice of a scared man, look up. The man is located behind that wall. 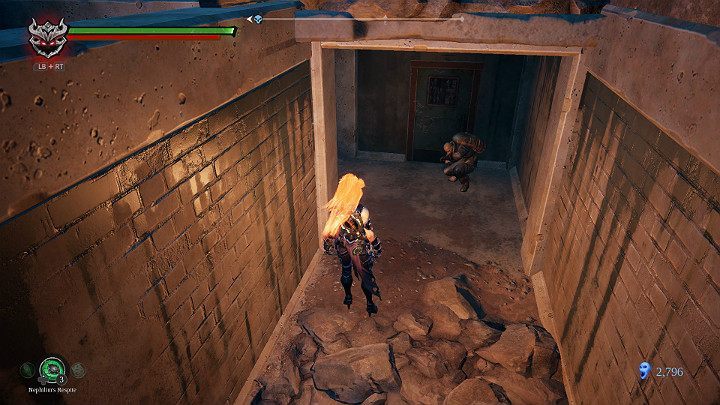 Jump above the wall and save the first man in Forgotten Lake. Before you leave, collect the item on the left. Jump back across the wall, and proceed.