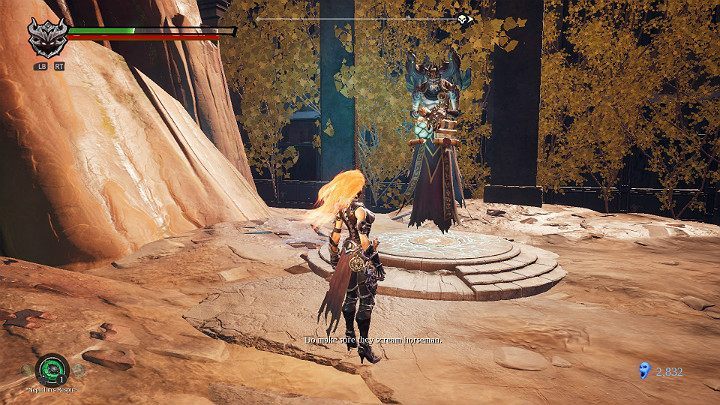 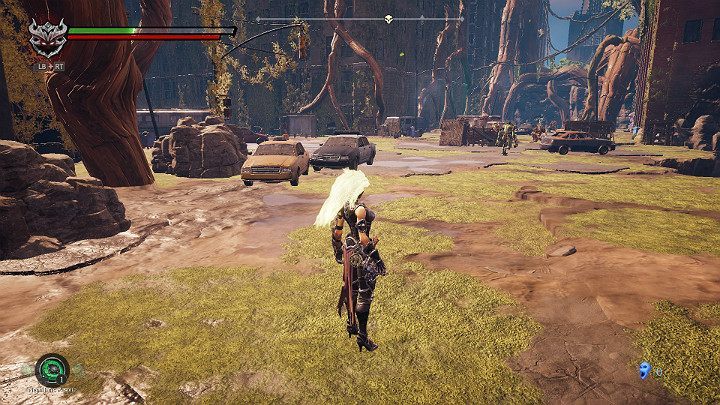 In front of you there is another part of the ruined city. The surrounding area is patrolled by enemies, so you have to be careful how you move so you don't lure all of them at once. 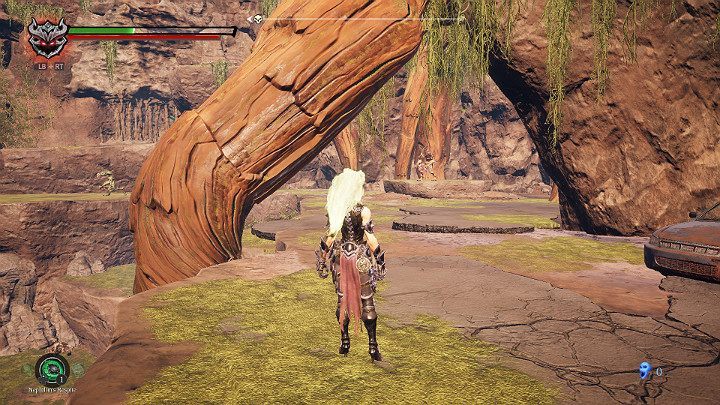 First turn to the right. In the distance you can see an opponent capable of throwing knives, but the biggest threat is the opponent who lurks right behind the wall, on the right. This is a new type of opponent which is invisible, so you can only see his outline. When you hit him, he'll materialize. 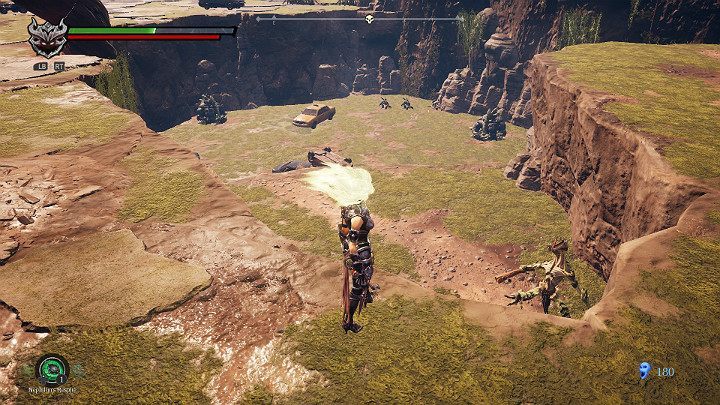 Below, there are two sleeping gorillas that guard the artifact and a Lurcher Cluster. On the right side you'll find a narrow tunnel, at the end of which there's a fragment of Adamantite. 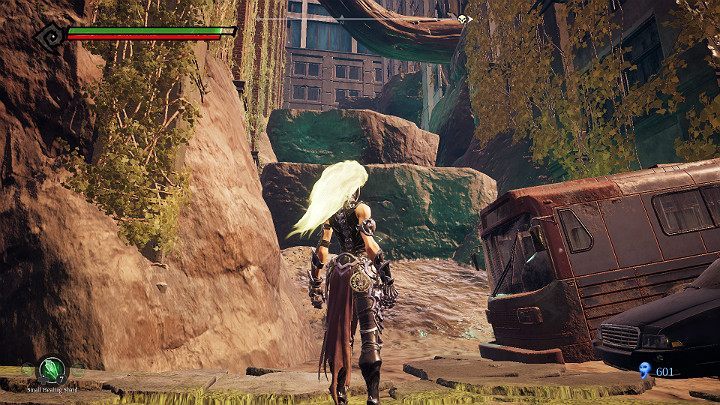 When you take the left branch, pay attention to the rock steps that you can jump on to get to the next item. Behind the bus there is an invisible opponent. 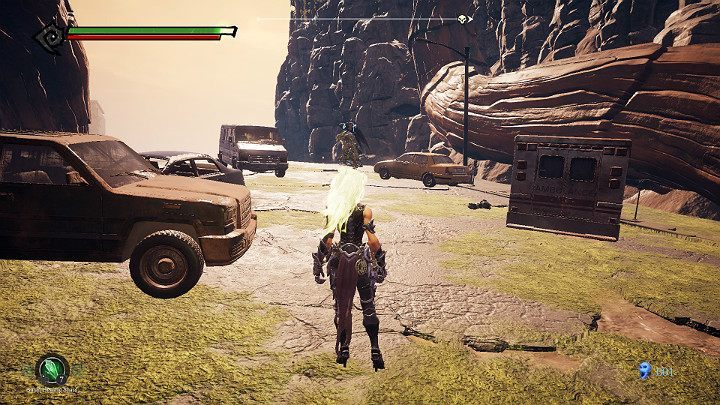 In front of you, there is an electric gargoyle - a new type of opponent. The Gargoyle is a very agile enemy who is able to deliver a deadly combo. What's more, he's able to teleport, but at the same time he also makes a characteristic sound, as if a lightning were passing by. 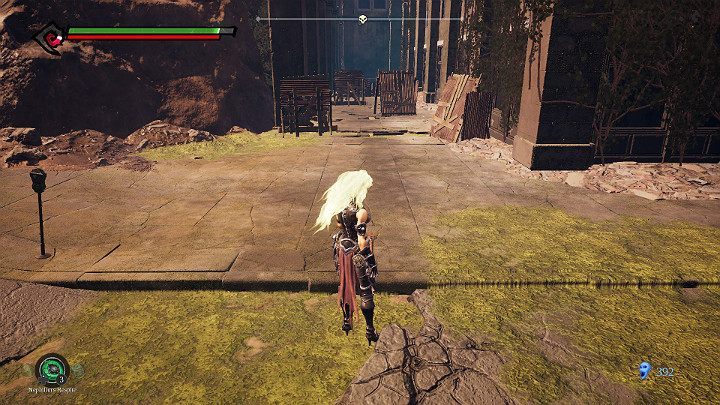 The passage between the buildings is relatively safe. Only at the end, before the corner, you'll encounter an opponent and one item to collect. 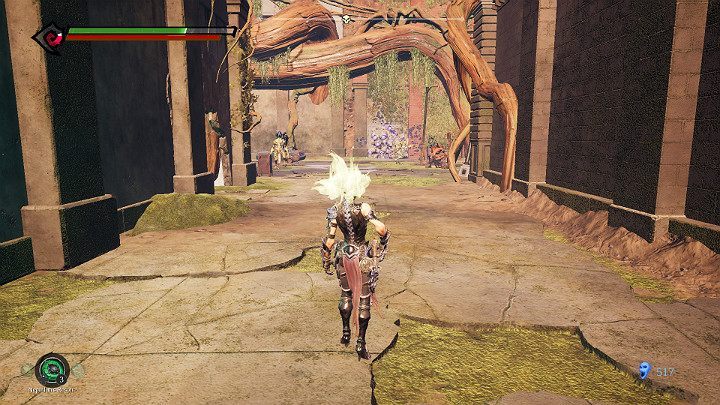 In front of you, there are 2 smaller opponents busy feasting and a gargoyle. 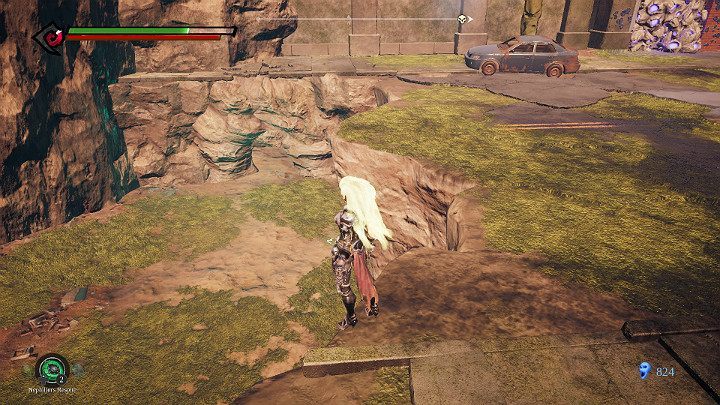 After the fight is over, jump down and enter the narrow passage in the wall shown in the picture above. 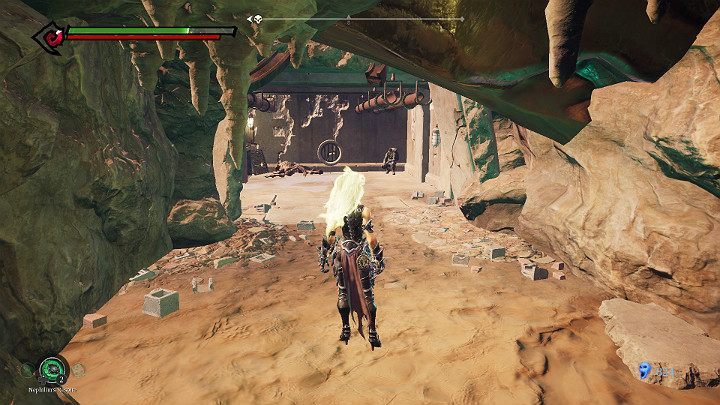 Inside you'll find another man to save and one artifact. 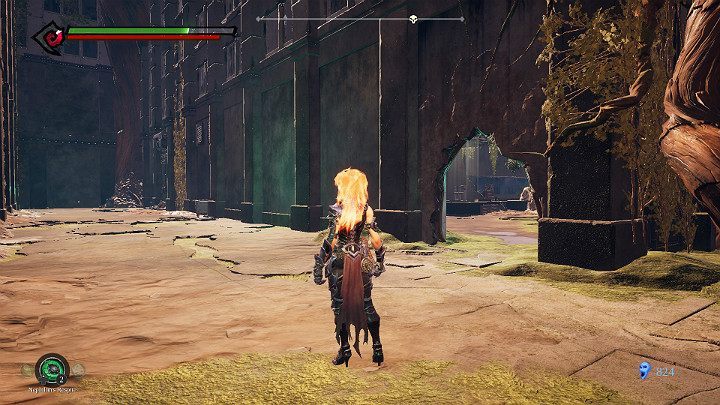 Exit the cave and go through a hole in the building's wall. 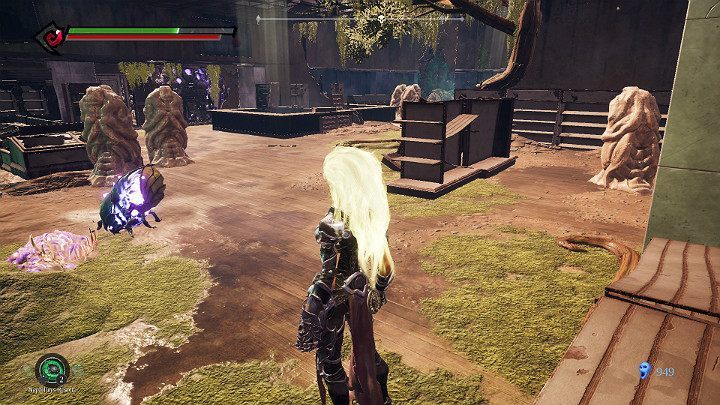 Inside you'll find a lot of statues. Smash them from a safe distance because an opponent can be inside. On the left is a cocoon with a purple substance that you have to dump to feed the beetle. 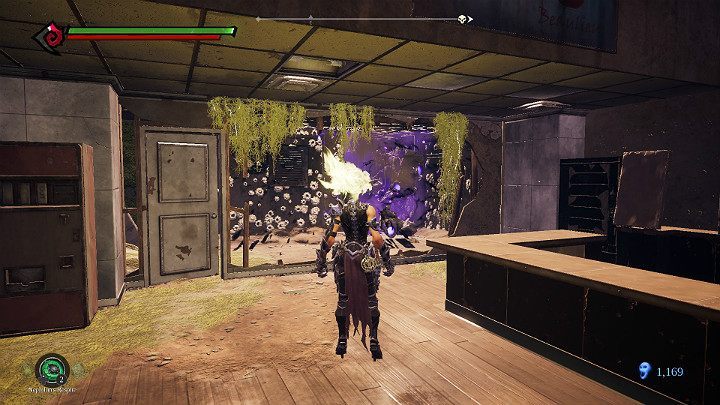 Throw the beetle at the purple wall to open a passage. 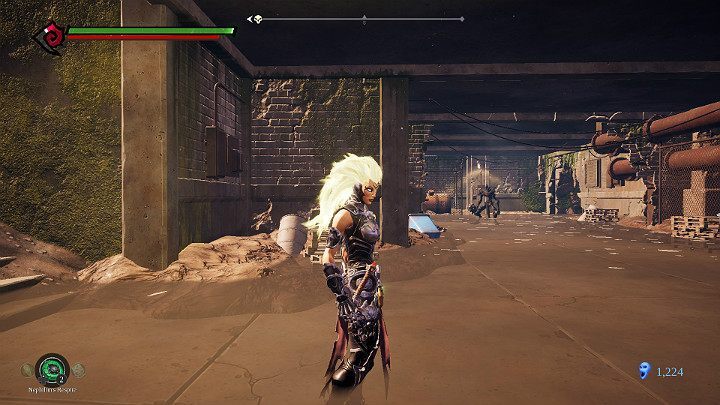 At the bottom there is an agile opponent waiting for you. After you kill him, you'll receive a fragment of Adamantite. Go through a hole in the wall. 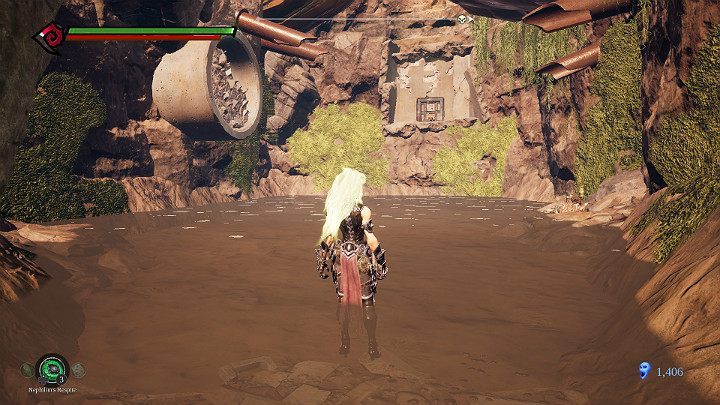 You will find a Lurcher Cluster and one shard in this area. Return to the room with the beetle. 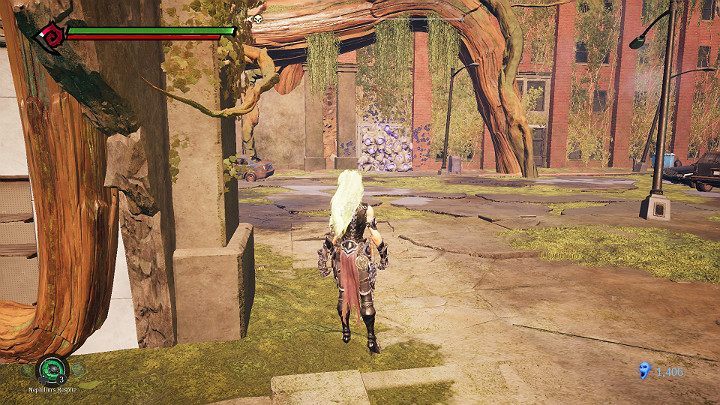 When you look outside, you'll notice another purple wall. Throw beetles into it to open a passage. 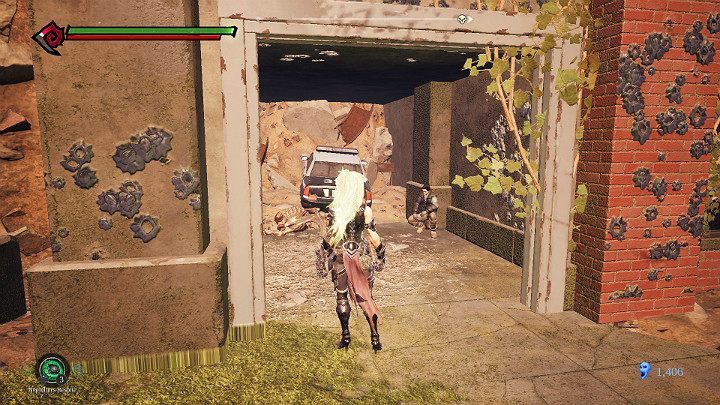 Inside you will find another man to save and one artifact. 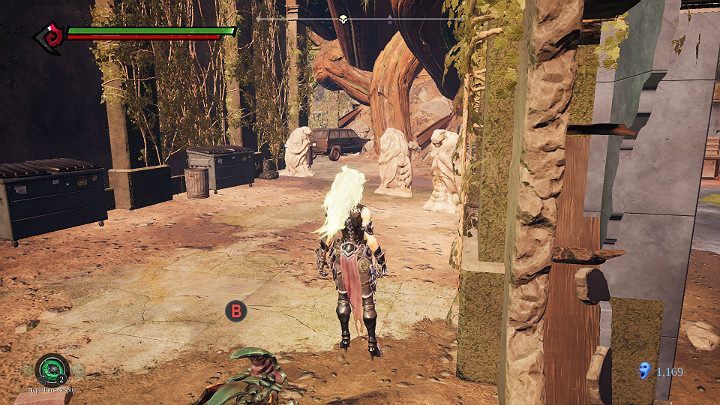 Return to the building and follow the passage on the right. There are some more statues outside. 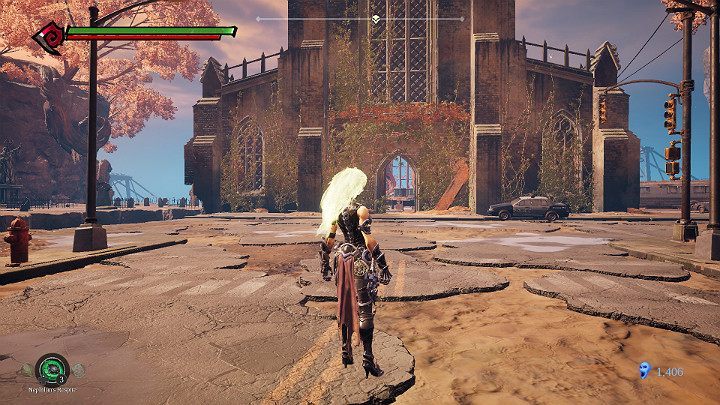 You'll reach the location with a large cathedral. 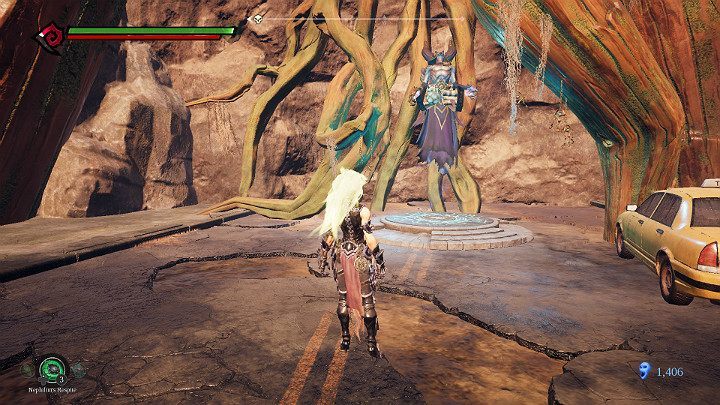 On the right side there is another checkpoint.