This page of the Darksiders 3 guide contains a walkthrough for West End. This is the first area visited immediately after the start of a new game. Fury will engage in some exploration and combat. West End is also a home to the first boss fight - Envy. 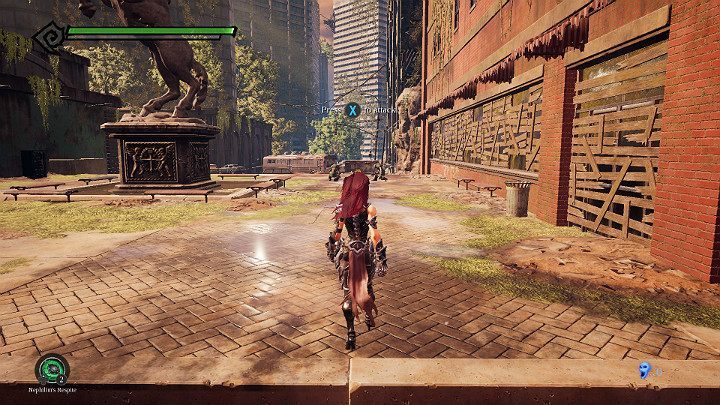 You start the game in a city attacked by monsters. Everything you need to know at the very beginning of the game will be displayed on the screen. Use these brief tips to learn how to attack, jump and do other things. 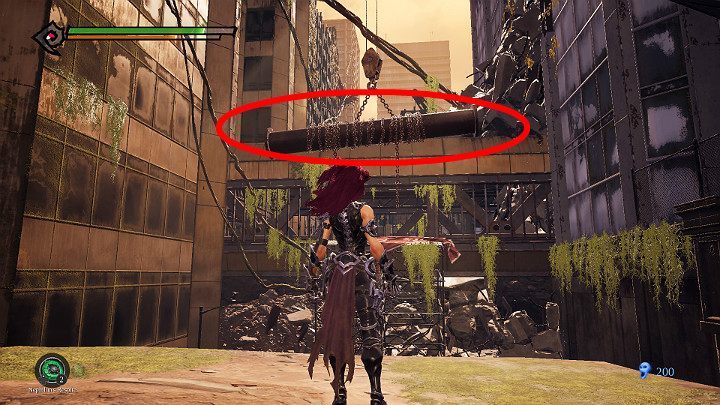 After defeating the first few enemies, you will have to climb the rock shelf, then jump out and use the attack button to catch the pipe shown in the picture and jump into the tunnel. In a moment, you'll have your first Boss fight, and at the same time the first test of your combat skills.

if you have any problems catching the pipe, jump and wait a split second until an icon appears that indicates a possible action. Fury may not be able to catch the pipe if you press the button too early. In this case, unsuccessful action can be immediately repeated, although later in the game such a mistake can end up with a fall into the abyss.

The fight against the first Boss in Darksiders 3 is divided into 3 phases. In each of them the opponent will behave differently. So what should we pay special attention to? Here are some tips on how to fight the first Boss - Envy. 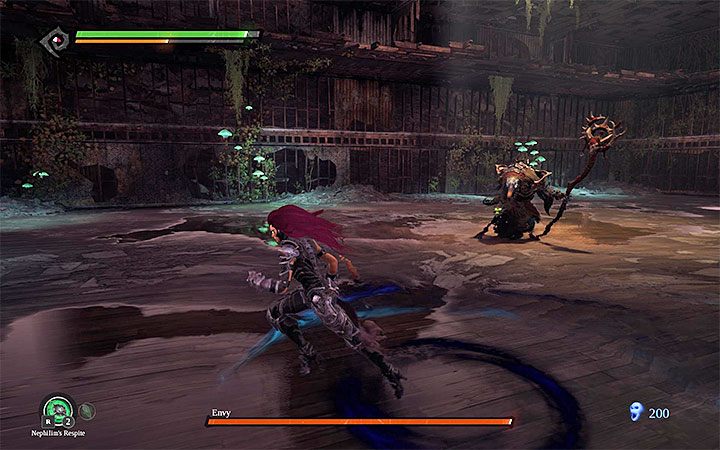 As soon as you enter the arena, the opponent will attack you right away. Watch out for the magic attack of Envy, which will be clearly telegraphed, you will have some time to dodge or jump away.

Attacks with the Staff 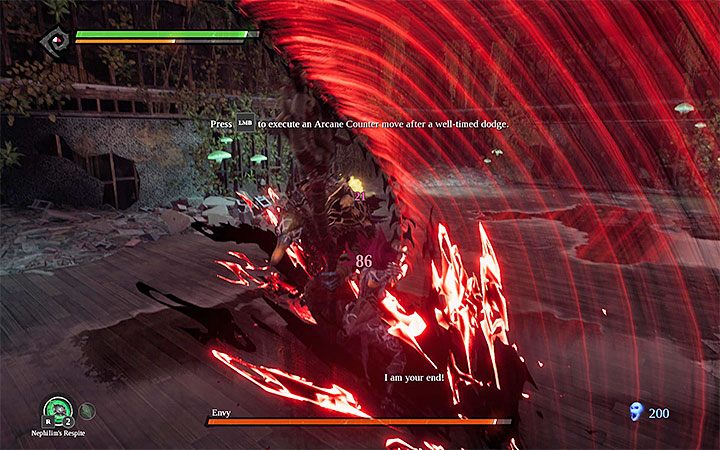 Jealousy uses his combat staff to lead out attacks. The weapon has quite a large range so you have to avoid it being attacked. When you see that Envy starts an attack with a weapon simply dodge and inflict a few blows.

Look for an opportunity to counter-attack after each successful dodge. If the dodge was perfect, the counterattack will have increased strength and Envy will lose more health points. 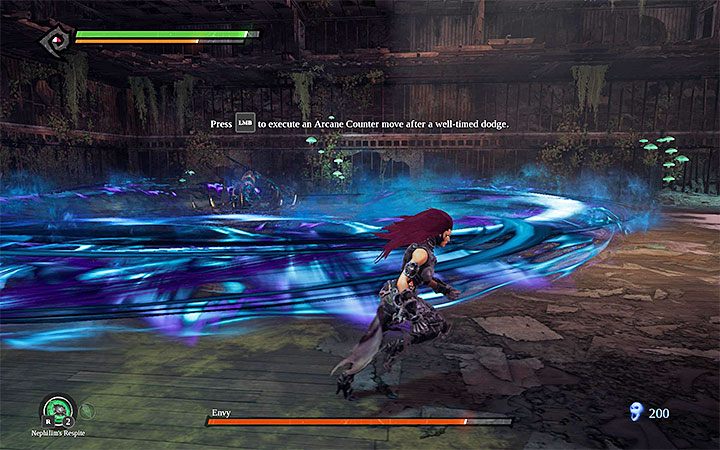 At some point in the duel, Envy will start teleporting. As soon as this happens, it will hover for a short while in the air and then fall to the ground with all its impetus, creating a shockwave over which you will have to jump over to avoid injury. In the first phase Envy creates only one wave, but in the next stages of the fight it will be two or even three shock waves immediately following each other. 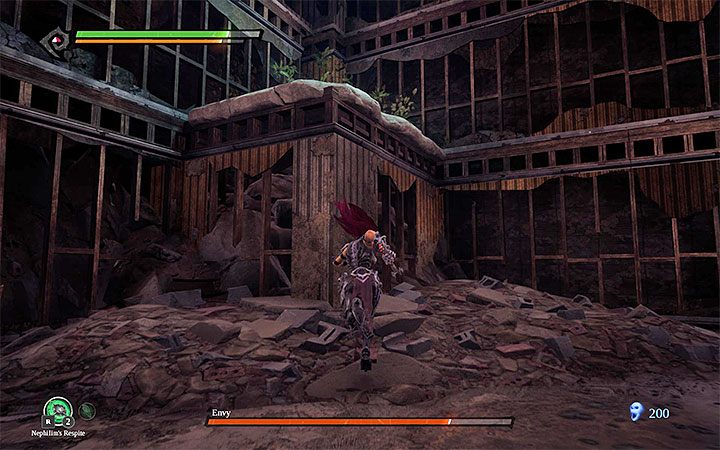 After each finished phase, Envy will hover in the air and you'll have to walk up to it. The ascent always begins in one of the corners of the hall. During the ascent, reach the next shelves and perform jumps towards the pipes, which can be caught with a whip. 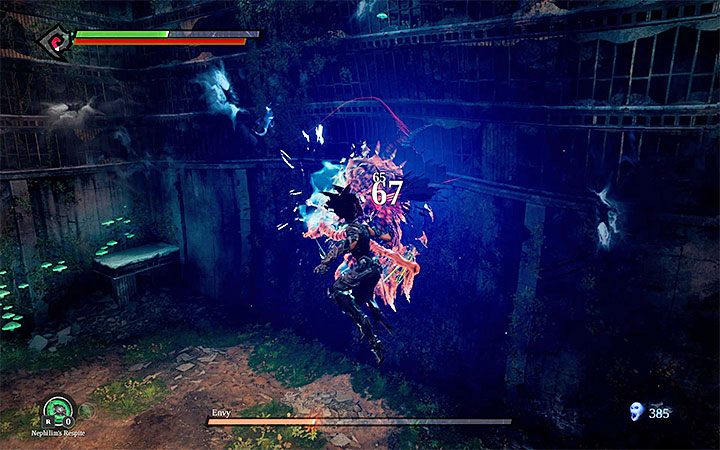 The goal of climbing is the same every time - to be found on the top shelf next to Envy. Make a double jump to the boss and start launching attacks in the air that will weaken Envy. Continue attacking and dodge until the boss loses the entire health bar.

if you don't get to the boss fast enough, Envy will perform a very powerful attack, releasing a massive energy ray. It can kill or seriously injure Fury, bringing her back to the lowest level. 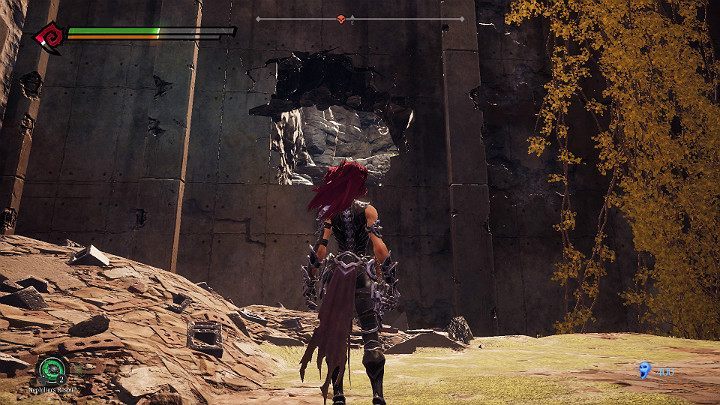 After the battle is over, go through the hole in the wall shown in the picture above. Then go forward as the path leads until you reach the city center. 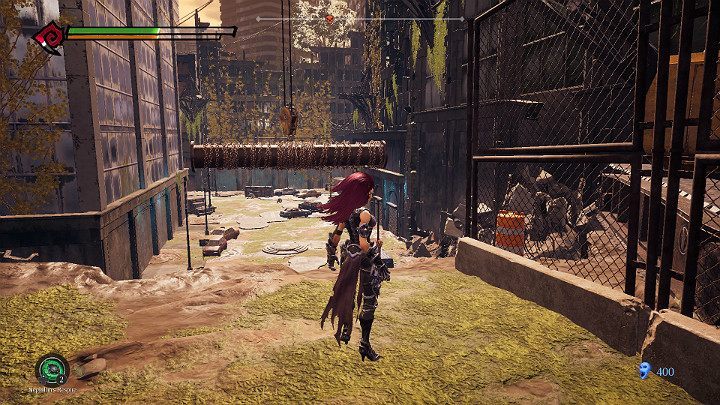 The next jump ahead of you. Bounce off the ground and use the pipe shown in the picture above to jump over the gap. It should be mentioned here that after jumping to the other side of the precipice, the pipe will fall from the boom and you will not be able to return to your previous location, at least for the time being. 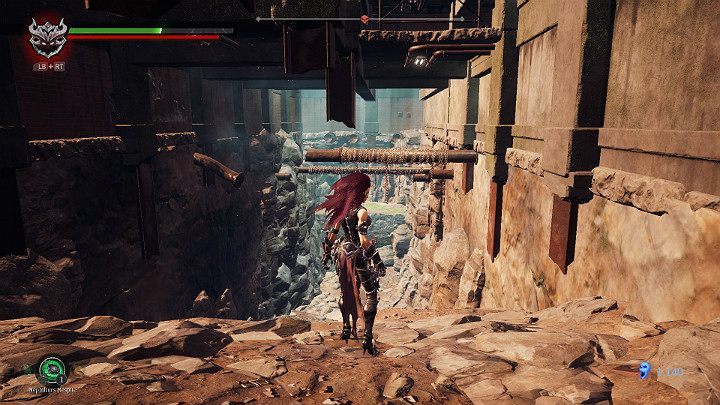 After exploring the city and finishing all your opponents, enter the building on the right. You can visit the upper floors to gather some souls. Next, go down to the bottom. Your task will be to jump to the other side of the chasm using the trick you already know. Jump to the other side using pipes. 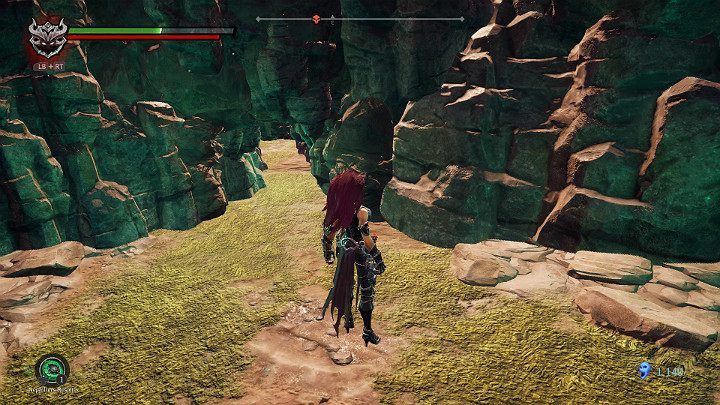 The next stage of your adventure will be passing through a narrow corridor. There's no danger inside so you don't have to worry about the lack of space. 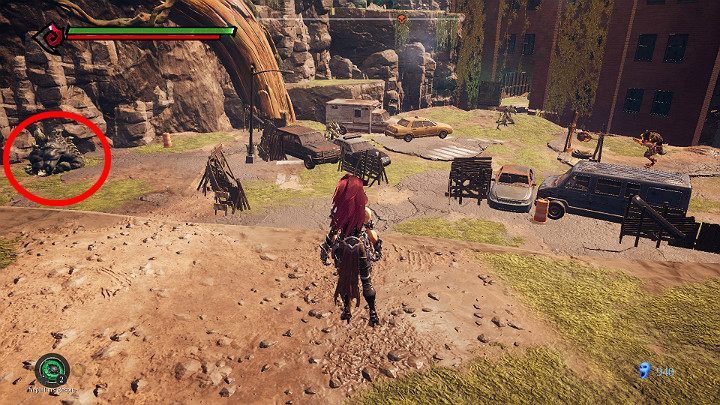 When you reach this location, your biggest threat will be a sleeping opponent who has been marked with a red circle. First, defeat the smaller opponents on the right hand side to have more room to fight against the tougher rival. A rock monkey has many arms and attacks with wild fury. Try to keep your distance and attack after a successful dodge.