This section contains starting tips for Darksiders 3. You'll find tips and information on a variety of topics including fighting, character development, upgrading equipment, exploration, or keeping Fury alive. Familiarizing yourself with the contents of this chapter will help you survive during battles and lower the risk of unwanted outcomes. 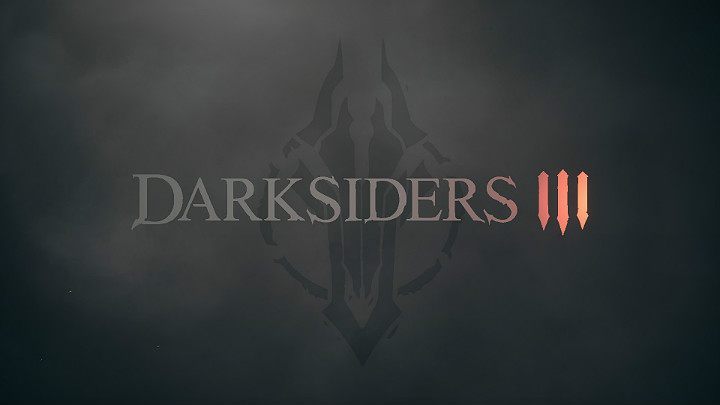 The advice is addressed especially to new players who are just beginning their adventure with the Darksiders series, although a lover of the series may also find something for themselves here. 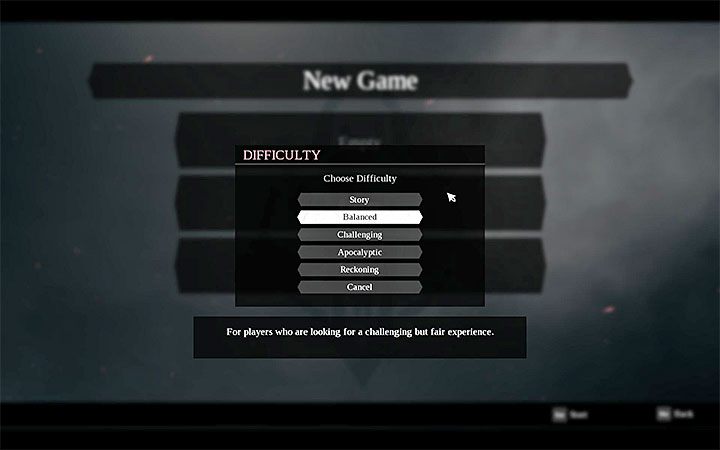 Darksiders 3 is quite a demanding game. Defeating monsters and avoiding death may cause big problems even if you had experience with the previous installments of the series. The third entry of the Darksiders series is, in our opinion, the most difficult.

We recommend choosing Balanced for your first playthrough. As per its name, it should offer a fairly large challenge, but shouldn't cause frustration with the constant deaths of the main heroine. Remember, however, that even playing at this level of difficulty you will need a lot of practice mastering the most important moves. Exploration is also an important aspect of the game, as you can find valuable loot, including souls that can be used to develop Fury.

When starting a new game you will be asked to choose Nightmare Mode. Do not accept, as this mode works the same as Ironman modes from various other titles, deleting all progress in case of death. If this is your first encounter with the game, you can easily die even when playing on the lowest difficulty level. Moreover, completing the game in the Nightmare Mode isn't rewarded in any way. 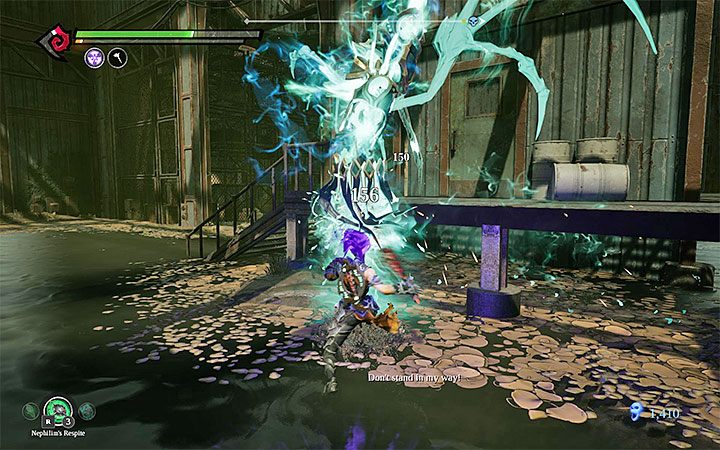 In Darksiders 3, all auxiliary weapons can be used together with the main weapon. For example, you can use the main weapon to pull an opponent, and immediately switch to an auxiliary weapon in combination without losing momentum. Each unlocked Hollow adds a new secondary weapon. It is recommended to test the weapon and get acquainted with combinations available to that weapon.

Deposit souls before an important fight 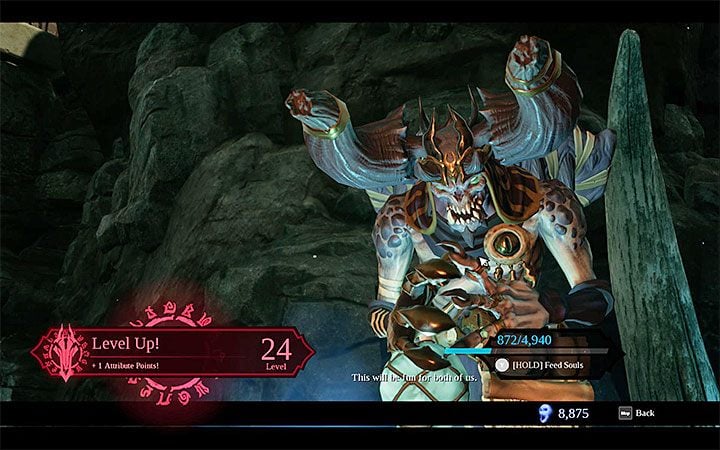 Remember that when you die in Darksiders 3, all souls you had collected will be dropped. In such occasions, you need to return for them - they can be found in the location where you've previously died. You need to attack them with any weapon in order for them to return to you.

You can protect yourself from losing souls by transferring them to Vulgrim to get additional attribute points. Moreover, do not break found soul containers immediately after finding them. They are safely kept in your inventory until you decide to open them.

Upgrade your weapons and their enhancements 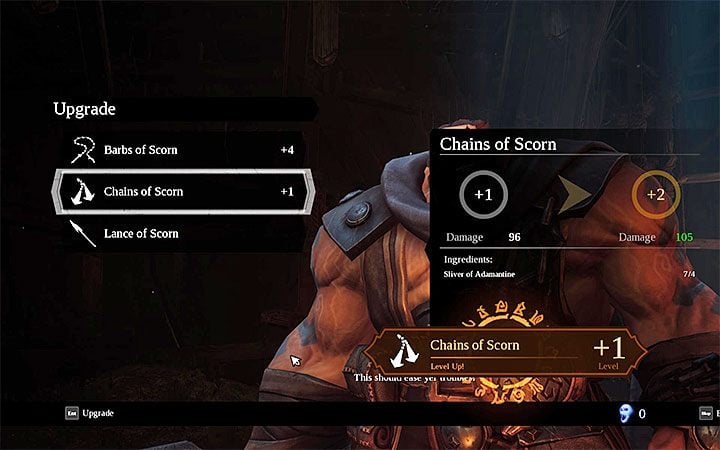 Darksiders 3 offers the player the opportunity to strengthen weapons and benefit from special upgrades. To upgrade your gear, you must visit Ulthane at the Maker's Forge. You will find the forge soon after beginning the campaign - it has a fast travel spot nearby. 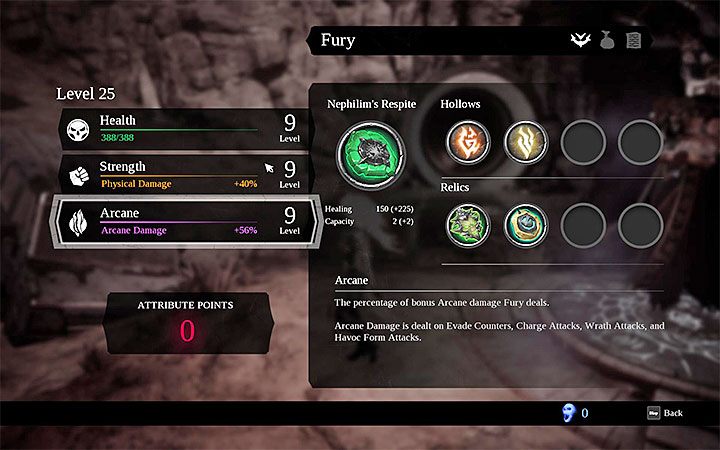 Transfer souls at every opportunity and explore the world to find Luminous Visage items. Both of these things will allow you to get attribute points, which can then be spent on increasing life, strength, and magic.

Each of these three main parameters allows you to make the heroine stronger, or more durable. If you want, you can develop them evenly or allocate more points to improve one favorite attribute. The game also has an item to reset attributes if you think you made a mistake while creating the current build and want to change your previous decisions. 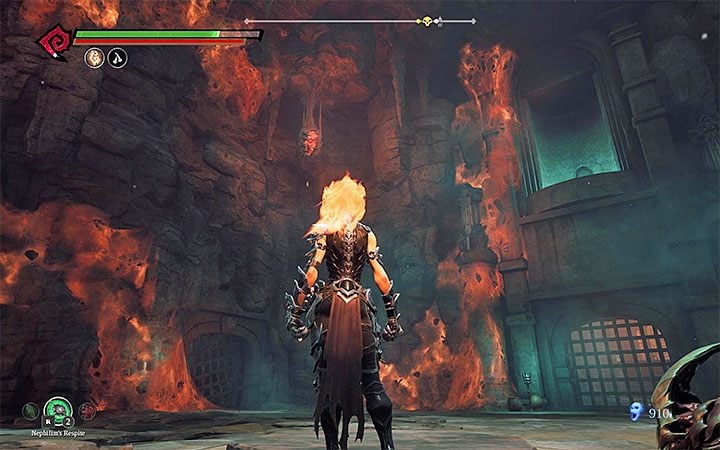 Before you start solving the puzzles in Darksiders 3, first look around the location and try to find some scheme, a pattern. Usually these are some objects to be placed in the right place or crystals to be hit in a short period of time. When breaking through barricaded passages, it is usually enough to use the essence of the flame or beetles. Our walkthrough offers solutions to all riddles found in the game. 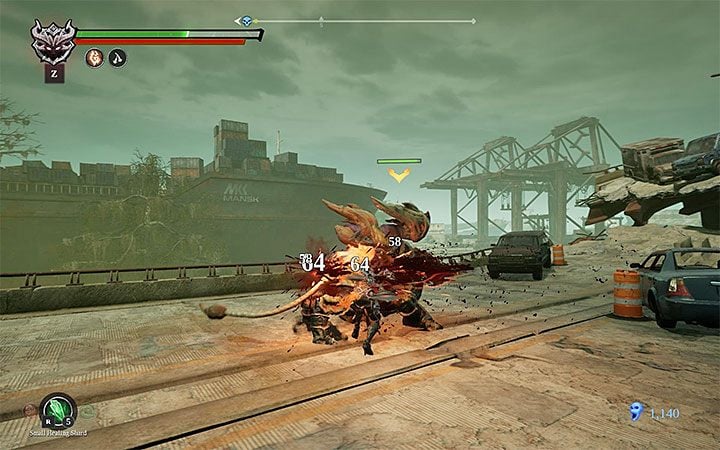 The best way to fight your opponent is to rely on fast counter-attacks. Offer a few blows, withdraw and wait for the opponent to move, and then counter. If a dodge is executed properly, you'll be able to perform a powerful counter using your main or secondary weapon which deals a lot of damage.

You can further increase your chances of countering an opponent by locking the camera. Thanks to the locked camera you can focus solely on attacks and dodging and not worry about the opponent disappearing from your view. We do not recommend using the camera lock when fighting large groups of opponents, as Fury can be easily hit from the side or the back by the remaining opponents.

Smash everything you can 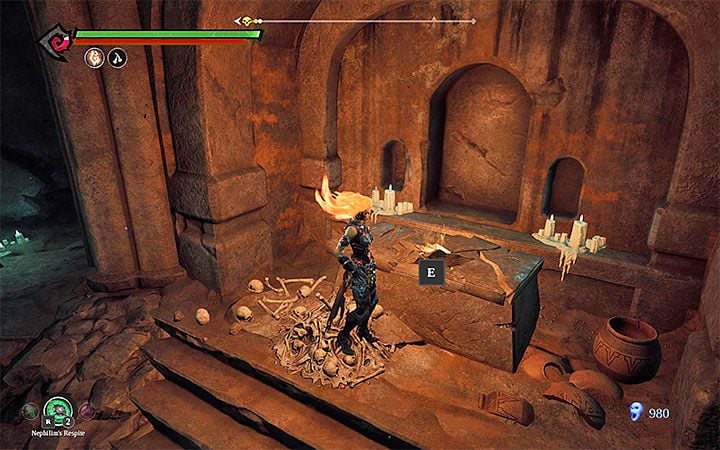 Try to break all boxes, sarcophagi, statues, urns, rubbish bins and similar items as you pass through different locations, sometimes you can find something valuable in them. Many destructible objects leave orange orbs - the main type of loot found in the game. By picking up orange orbs, you can find e.g. soul containers, consumables, or unique cores and artifacts.

Destroying objects can also reveal secret passages, such as tunnels leading to rooms with unique treasures. 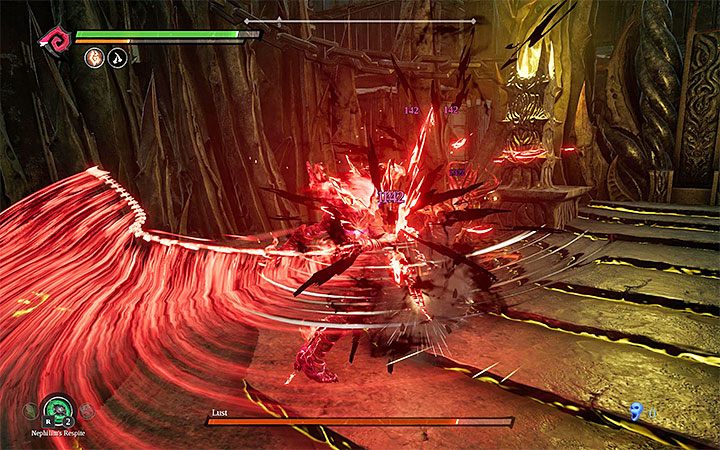 Two main types of special attacks in the game are Wrath Attacks and Havoc Form Each one of them has to be charged, which means that you can't use them in any battle.

Special attacks are best launched during battles with large groups of enemies and bosses. During a special, your character is completely immune to attacks. You can use this in combat if you are sure you can't avoid being injured.

Sometimes it is better to let go 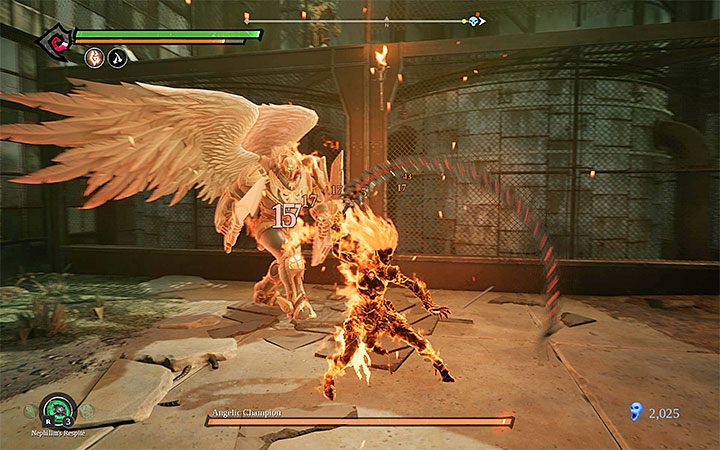 Some secondary battles can be too hard if Fury is on too low experience level, and her attributes and weapons are not developed enough. In such situations, it is recommended to skip the battle and return to it when Fury is stronger.

Darksiders 3 has a partially open world, and so you can explore the available locations in the order that suits you best. You can return to any secondary location in the further part of the game or even after completing the main plot.

When you get stuck and don't know what to do next, look around the location. Sometimes the most obvious things are obscured. Look for cracks in walls, floors and ceilings. 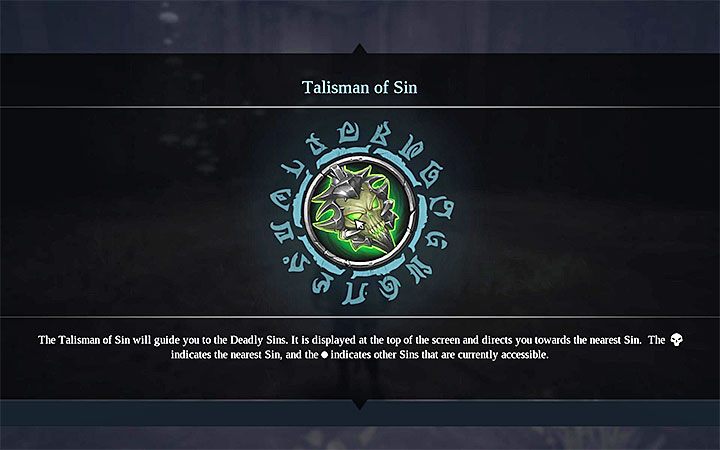 After defeating the first boss of the game Fury receives a Talisman of Sin, an item which works as a compass. The compass shows the way to the next bosses, the nearest (skull icon), as well as the next one (smaller dots).

Use the compass when you don't know where to go. It's bearings are constantly updated. It can lead you to e.g. a place where you need to jump into a hole or squeeze through a tunnel. This will help you with exploration and direct you to locations connected with the story.

Serpent Holes are a means of fast travel 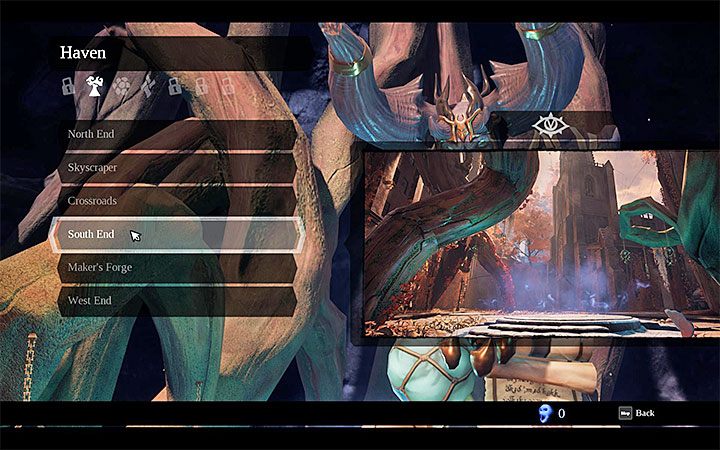 In order to move quickly between locations, it is advisable to use Serpent Holes. To use them, you need to reach one of the teleports near which Vulgrim appears. Select the third dialogue option from the list to display a list of locations that have already been discovered. You can then select the point to which you want to go. Teleportation is free. 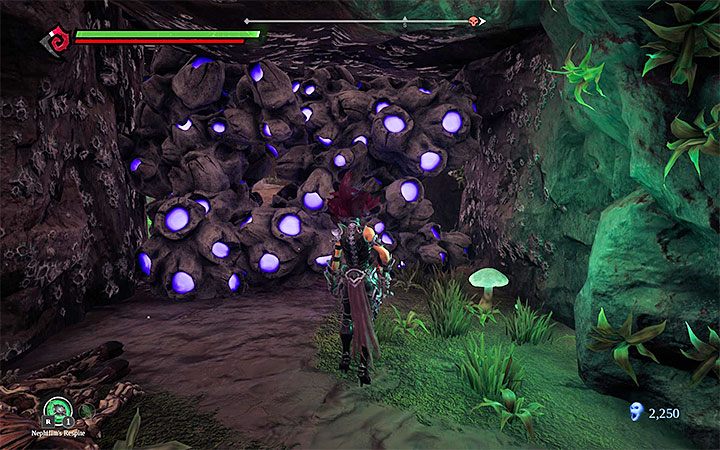 Blocked passages can be gradually unlocked after gaining new Hollows, which are rewarded for defeating certain bosses of the game. For example, after getting the Fire Hollow, you can burn webs. Do not waste time trying to get through the obstacles. You can return to them getting a new Hollow or leave them for the very end, after the completion of the main storyline.

Watch the health bar to be able to heal Fury when necessity arises. 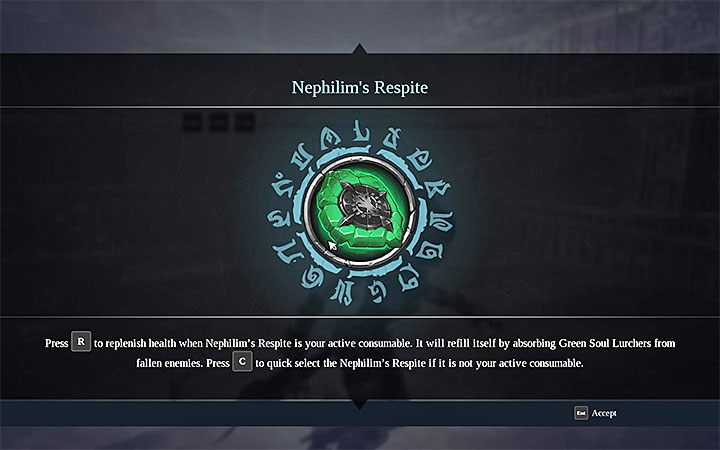 Darksiders 3 is a very difficult game, so make sure to check the health bar (found in the upper left corner of the screen) often. React quickly if you notice that the heroine is on the verge of dying. Death can force you to repeat a portion of the game and having to retrieve your lost souls.

Best way to heal Fury is to use Nephilim Respite. It's charges replenish as you defeat encountered opponents (you can increase the limit of charges by gathering special items) In addition, you can use Healing Shards. These are consumables which you can use once per some time.

Return to the places where you died to return souls 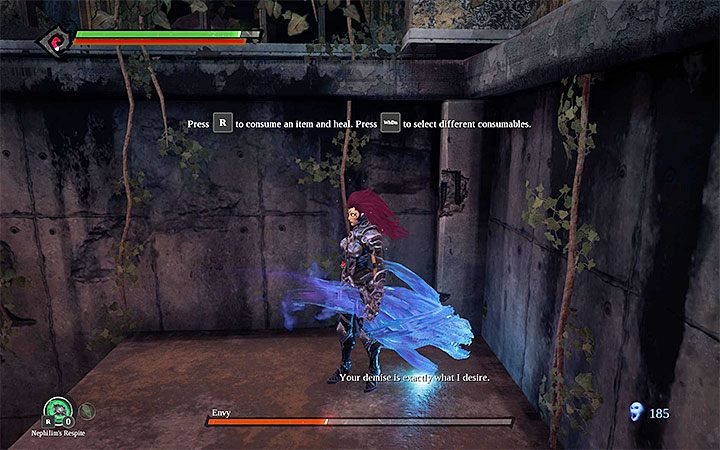 If Fury died, always try to retrieve souls which you had in the moment of death. To get them back, you need to return to the area where you died. Look for clusters of blue souls and attack them to add them to your inventory.

If death took place, for example, in the arena with the boss encounter, make sure to watch out and retrieve the souls without dying a second time.

In the initial stages of the game, avoid buying consumables 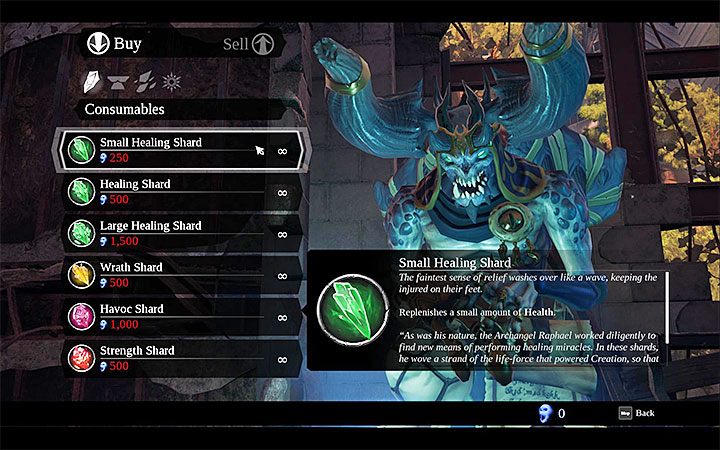 Vulgrim is the only merchant encountered in the world of the game, but not all of his stock is worth the purchase. In the initial stages of the game, you should spend your souls wisely.

Do not spend souls on consumables i.e. various types of shards. These items are not that useful in the initial stages of the game and besides, you can always find them among other loot found at orange orbs. It is best to give collected souls to Vulgrim, in order to unlock attribute points. Moreover, you can buy permanent items of inventory, such as weapon enhancements or new armors.