The following guide is a complete walkthrough for Daedalic Entertainement's game, titled The Dark Eye: Chains of Satinav. This is a classic point&click adventure game, which doesn't require any skill or reflex, but only an open mind willing to deal with dozens of logic puzzles.

The guide is divided into chapters corresponding to successive phases of the adventure described in main character's journal. This solution is enough to complete the game and in some cases explains issues, which can be confusing for those people, who do not speak English at least at medium level.

What do font colors used in the walkthrough mean?

In The Dark Eye: Chains of the Satinav you can find a simple magic system consisting of two spells: breaking and fixing. Both spells are represented by small icons - yellow and blue one, located on the left side of the inventory. The player can all the time use the breaking spell. The fixing spell is available only in the presence of Nuri or later in the game. 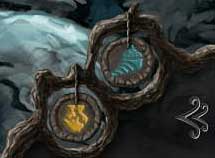 The main game Hero is named Geron. He takes an adventure and travels over the world accompanied by fairy named Nuri. Their mission is to find a way to defeat an evil prophet who wants to take over Andergast and its inhabitants' dreams. He also wants to take off the spell cast on him years ago.

In honor of arrival of Queen of Nostria, a challenge was laid. All challengers have to find in the town four badges in a shape of oak leaves. These leaves are made of different materials, including copper and brass. You start the game in a moment when Geron, local bird catcher, is held by powerful Ulfried and asked by Olgierd, son of the dyer. He is in very uncomfortable situation, "diving" in the pig trough.

Malignant Olgierd wants to take away from Geron one of his badges, even despite the fact, that it is not useful for him because he has to find brass badges, while Geron has only copper ones...

About The Dark Eye - Chains of Satinav Game Guide

This site is not associated with and/or endorsed by the Deep Silver / Koch Media or Daedalic Entertainment . All logos and images are copyrighted by their respective owners.