On this page of our guide for Cyberpunk 2077 you will find a detailed walkthrough for the mission called Playing for Time.

Johnny Silverhand was captured by Adam Smasher and then brought to the Emperor, Saburo Arasaka, and he has him connected to the soulkiller. After these events, V wakes up at the junkyard, in critical condition. 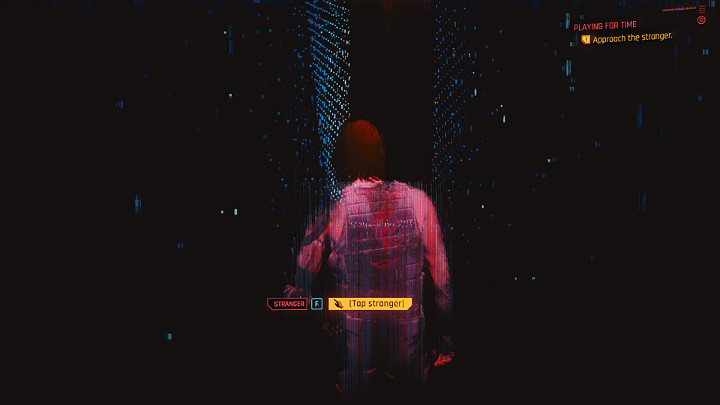 You will see a digital environment in which you will notice a red figure that resembles Johnny Silverhand. Follow him, and when you tap him on the shoulder, this strange sequence will end. 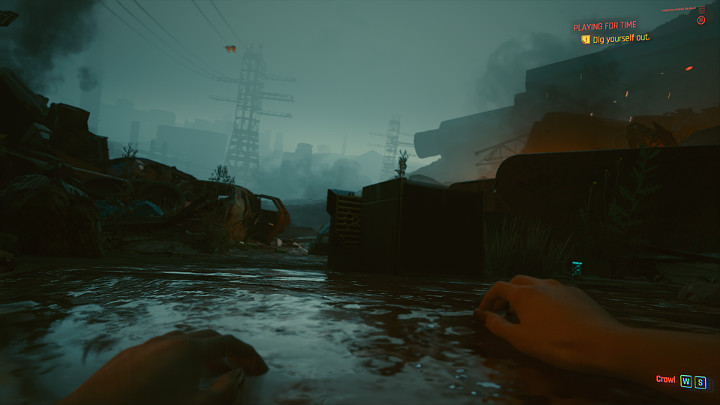 V will wake up at the city's garbage dump. Apparently, he was declared dead after he was shot by DeShawn and left to rot under a layer of garbage. But something brought him back to life. Crawl out of the rubble and crawl forward a little. 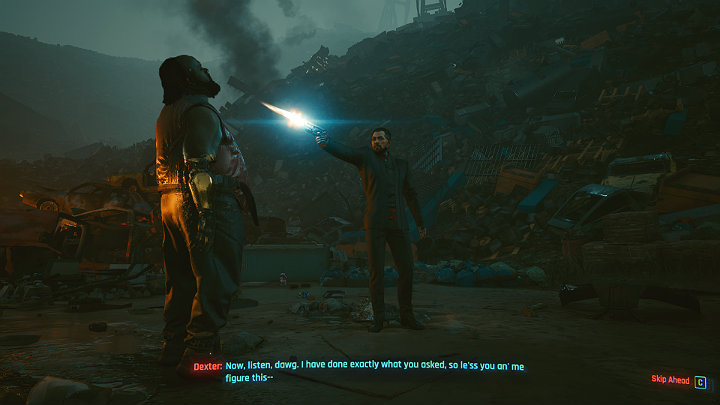 You will be caught by Dexter and pulled up to face Takemura (Arasaka's bodyguard), after which you will witness the murder of DeShawn. After a while Takemura will call Yorinobu with the information that he found his father's killer. 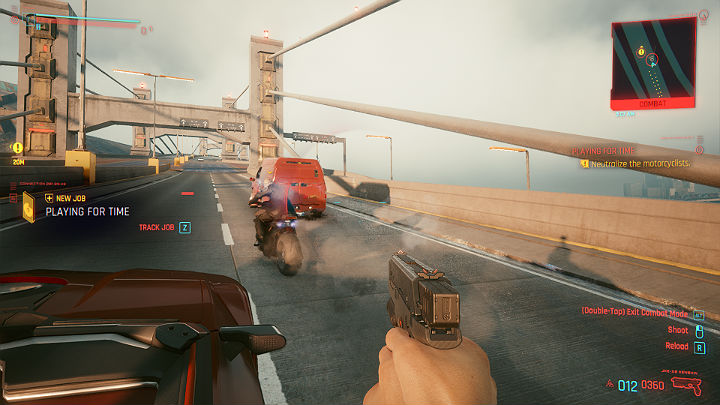 Takemura will put you in the car and then save your life with some powerful drug. When you are attacked by motorcyclists, you will get a gun and have to deal with them. Shoot the vehicle to cause an explosion. 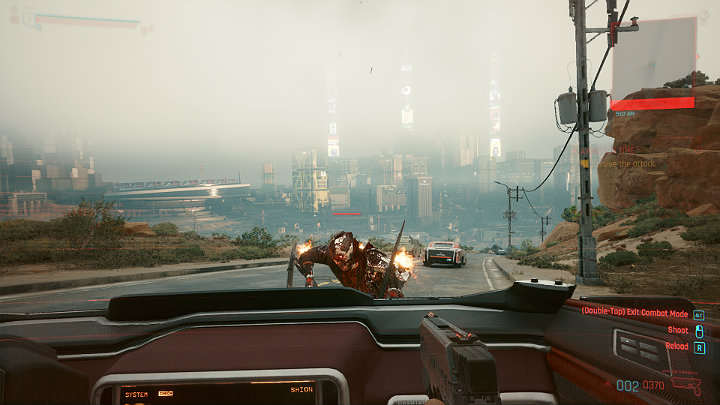 One of the robotic killers armed with long claws will jump on the hood of the car. You may try to kill him, but the attacker will still be stopped by the car's frontal collision with a billboard. 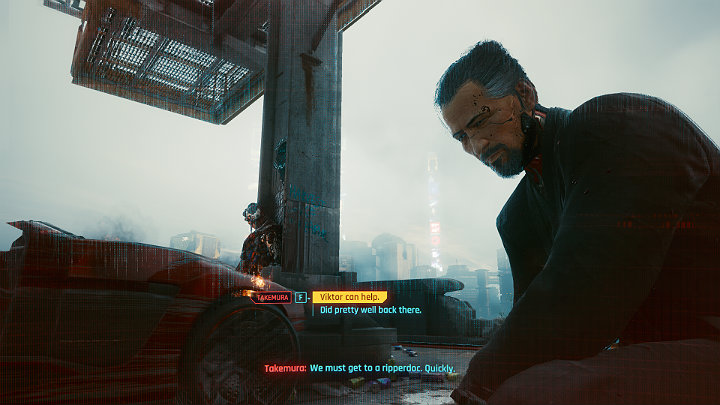 When Takemura asks about a doctor you know, say that Viktor will definitely help you. Call a Delamain and have the cab to take you to Viktor's clinic. 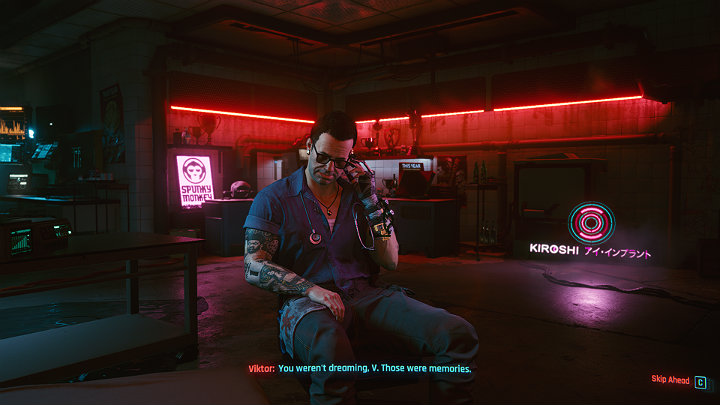 After a longer movie cut-scene, V will wake up in Viktor's clinic and tell him about a strange dream, about the fact that was someone else and what he was doing there. Viktor will explain that it wasn't a dream but memories, and that V has Johnny Silverhand's ROM construct in his head and what he experienced was the rocker's past. Worse still, Viktor will inform V that the biochip is like a ticking bomb and he/she has not much time left, a few weeks at most. After some time, Silverhand's construct will be completely copied onto his brain and his consciousness will eventually be erased.

If you want to know exactly how it happened, you can ask Viktor to tell you everything in detail. 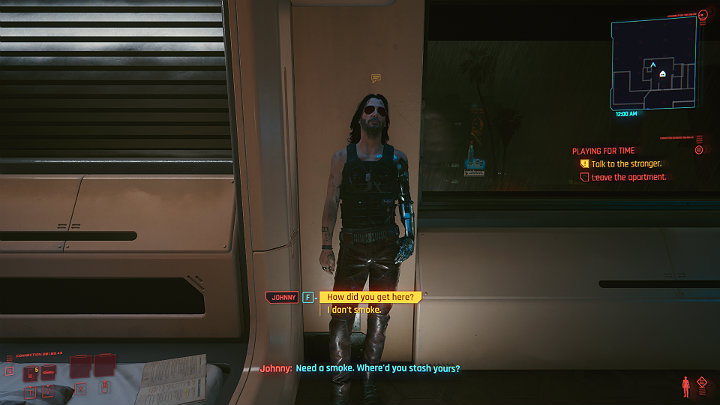 Talk to Johnny. After a short pause, V will take a medicine to block the unwanted intruder who has entered his mind. When you're in the apartment you can do some extra things. Takemura will call you and invite you to a meeting at Tom's Diner restaurant. Leave the apartment and go to the designated place. 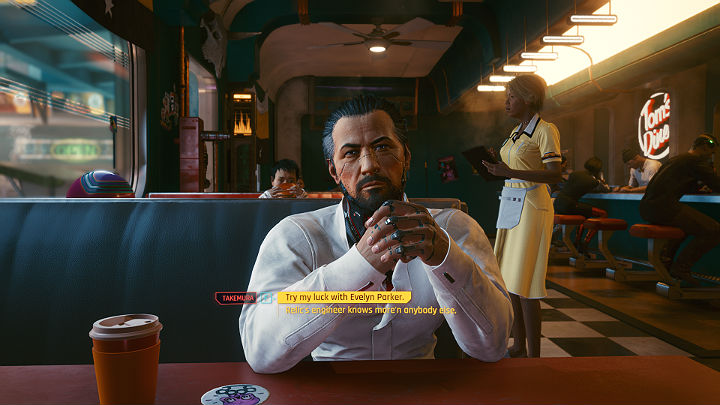 Enter the restaurant and approach the table where Takemura sits. The man will explain that he saved V because he needs his help. Takemura apparently found out that it was Yorinobu who murdered his father and wants to take revenge, and Evelyn Parker, who unfortunately left the town and covered all her traces, is supposed to help him. To convince V to cooperate, he explains that Arasaka corporation, as the chip's manufacturer, can save his life. During the conversation you will be given access to two main missions. 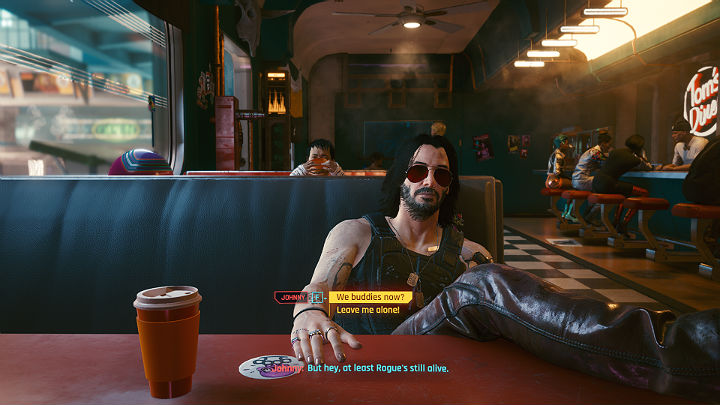 After a long conversation, Takemura will leave the restaurant and Johnny will take his place. He claims he's cooled down and no longer wants to kill V but to cooperate with him instead, and even help may help with Rogue. With this, Playing for Time will be completed.