On this page of our guide for Cyberpunk 2077 you will find out if it is possible to romance Panam Palmer in the second act of the campaign. You will also find out what is the course of a possible romance with Panam.

Panam - who is she, where to find her? 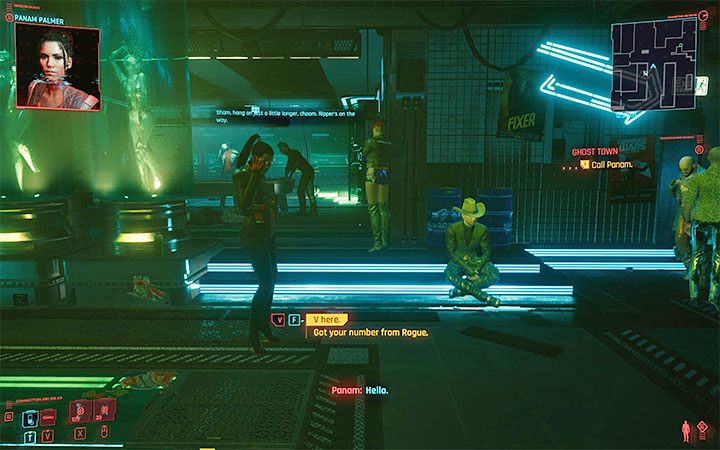 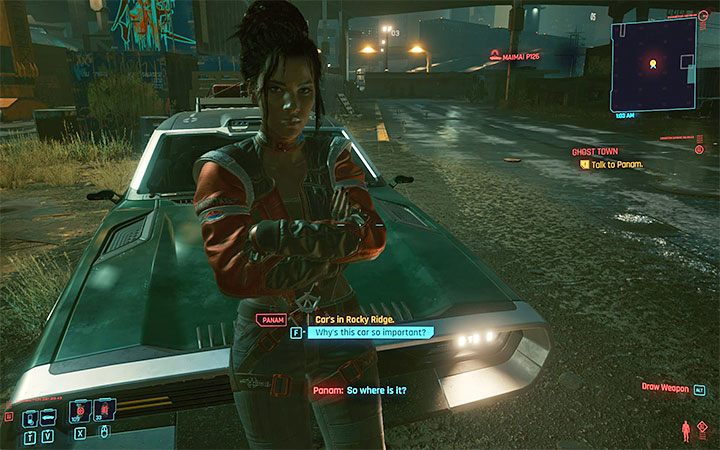 Panam Palmer is a female mercenary, performing dangerous jobs for credits. You can meet her while completing the main job called Ghost Town. Rogue will come up with the ide to hire Panam's services, from whom you will also learn that Panam used to ride with nomads and that you could use her knowledge of the Badlands.

You will be able to call Panam and then find her in Rancho Coronado district in Santo Domingo to start working with her. 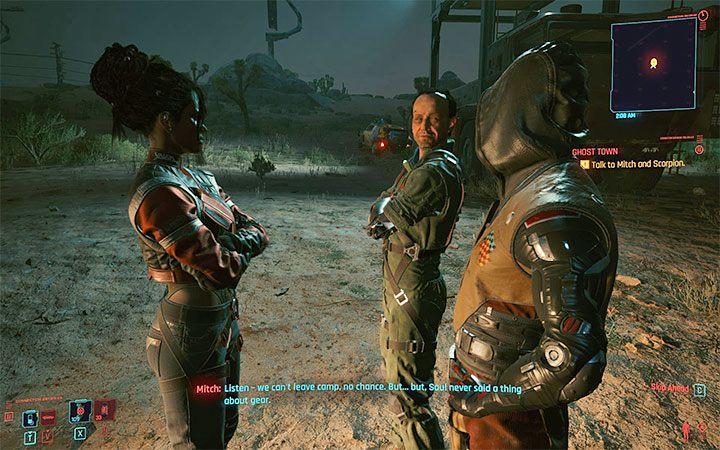 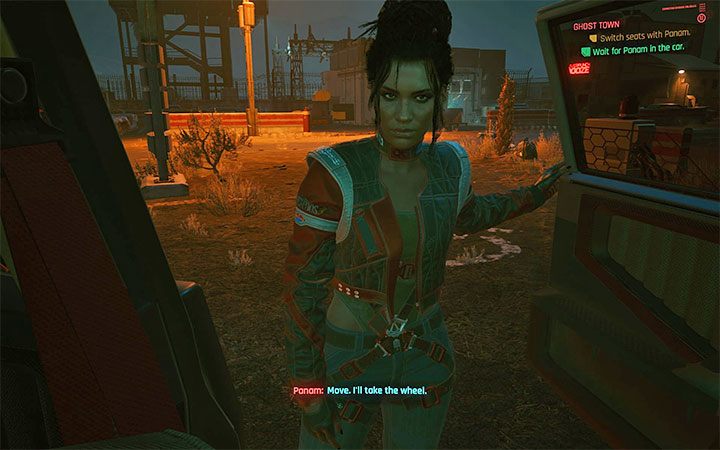 In the course of completing jobs together with Panam, she will be able to help V complete mission goals and take an active part in combat. In the meantime you will also have a series of conversations and visit her former nomad clan, Aldecaldo. This will enable you to get to know her better. 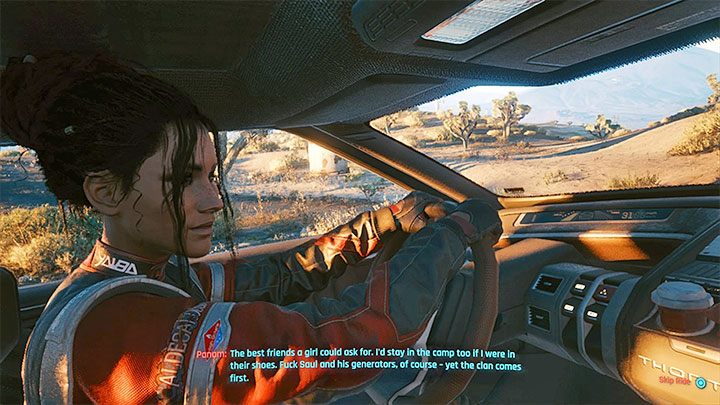 Yes, the game provides the option to romance Panam. However, this option is only possible if you play as male V - you can determine this only in the character wizard at the very beginning of the game. This setting cannot be changed later.

You can't romance Panam if you play as female V, although you will be able to make friends with her. Just don't expect any steamy scenes when playing a character with female physique. 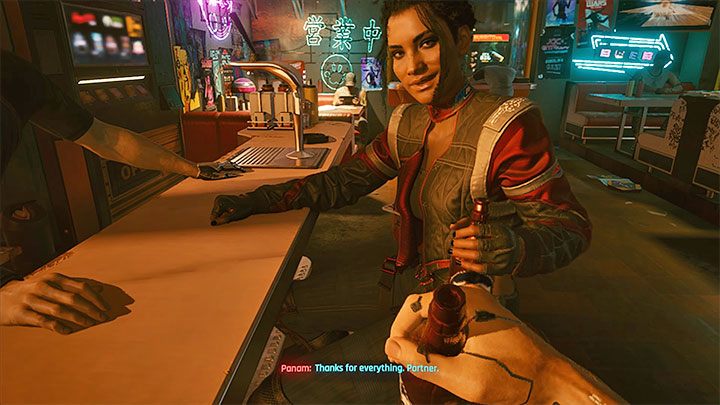 The first opportunity to flirt with Panam appears during the final part of the main mission called Ghost Town. These steps do not guarantee a successful beginning of a romance with Panam.

The final part of Ghost Town takes place at the Sunset Motel. You can have a drink with Panam in the bar and make (any) toast. 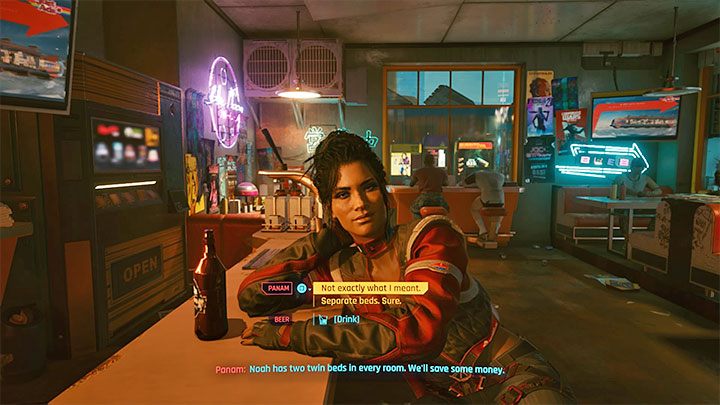 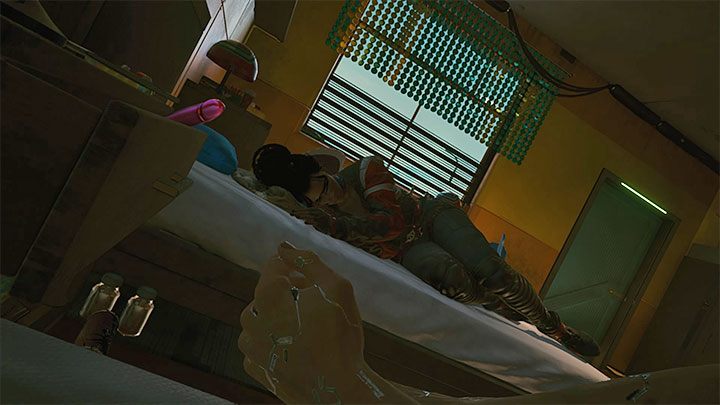 Panam will decide to sleep in the hotel and you can subtly suggest to rent a shared room with one bed. Panam doesn't want to sleep with you right now. You will be gently turned down and after reaching the rented motel room there will be a separate bed waiting. 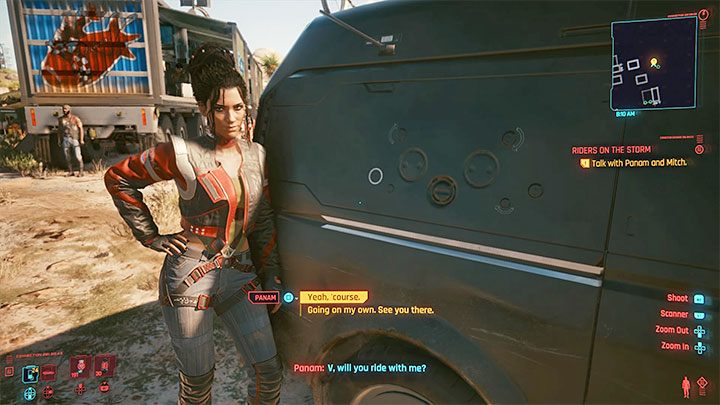 In order to start romancing Panam, you have to start completing her side quests, which become available later in the game. Most of the time you can behave in any way you like, but these missions have a few important sequences that can determine whether or not a romance will start.

The first Panam side quest is Riders on the Storm and you will receive it automatically when Panam calls you. This mission concerns freeing Saul, who was imprisoned in the hostile Raffen Shiv camp. In the initial phase of this quest, make sure that you and Panam reach the enemy camp. You can ruin the romance if you decided to drive there alone and the trip took too long. 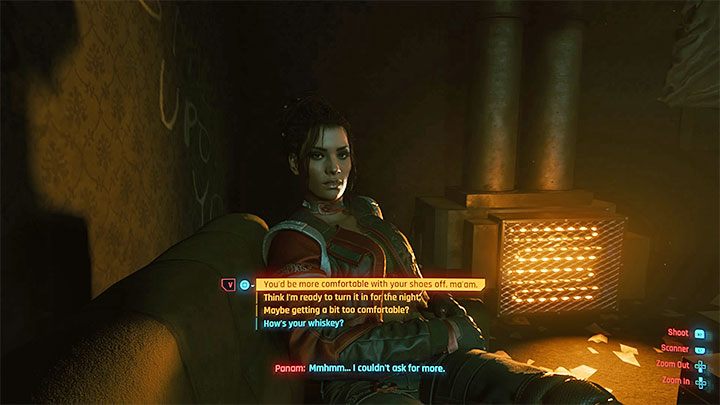 After the rescue action is successful, the heroes will be forced to spend the night on a farm. Restore the power supply, start the conversation and wait for Saul to leave. You need to behave properly at two moments during the conversation with Panam:

1) Offer to take off her shoes. 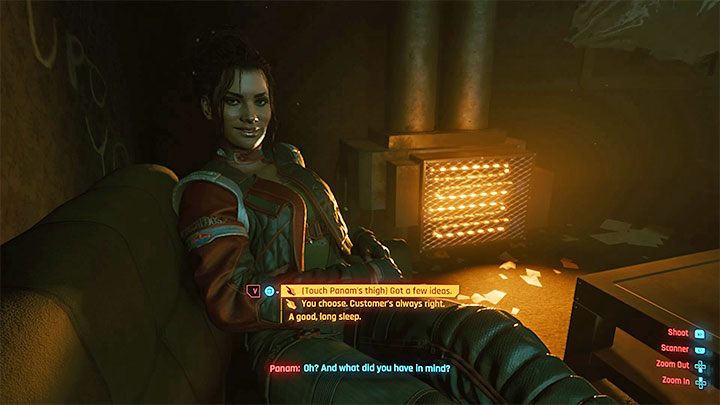 2) Choose any dialog option marked with a hand icon - You can try to put your hand on Panama's thigh (first dialog option - don't worry about its result because the affair won't be failed) or let her take over (second dialog option). Do not select the option to go to sleep right away - the last third dialog option, without the hand icon.

You didn't bed Panam yet but you've taken part in these two important moments that are mandatory. Failing to choose the right dialogue option may result in forfeiting the romance. 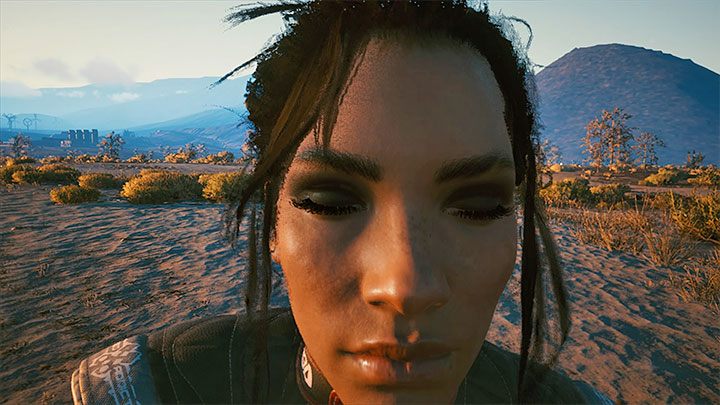 At the end of Riders on the Storm quest, use the dialogue options to refer to the events from the previous night. You will get a quick kiss from Panam. 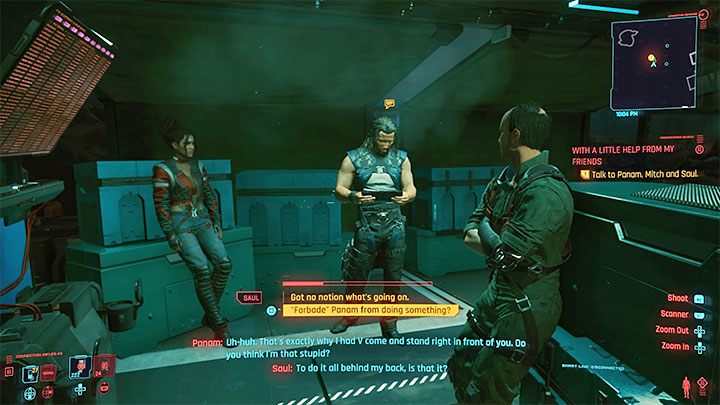 The second quest related to Panam is With a Little Help From My Friends, in which you have to keep an eye on Saul while he is visiting two in-game locations. Start by beginning the quest. As the title of the mission suggests, you cannot tell Saul what Panam is planning to do (regarding the convoy robbery). Not only will your chances of developing a romance with her fail, but her quest line will also end prematurely. Just choose other dialogue options, or don't speak at all. 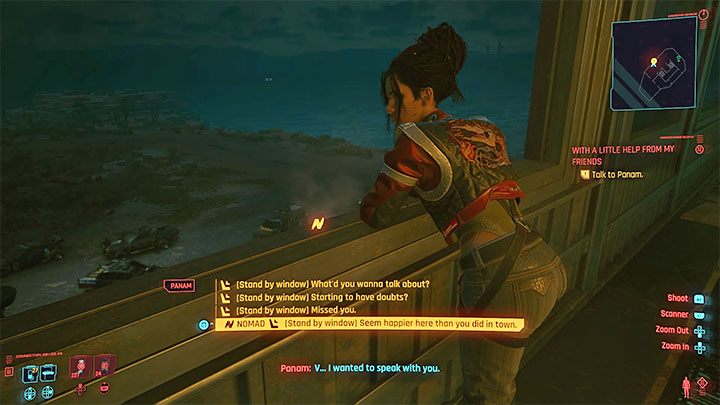 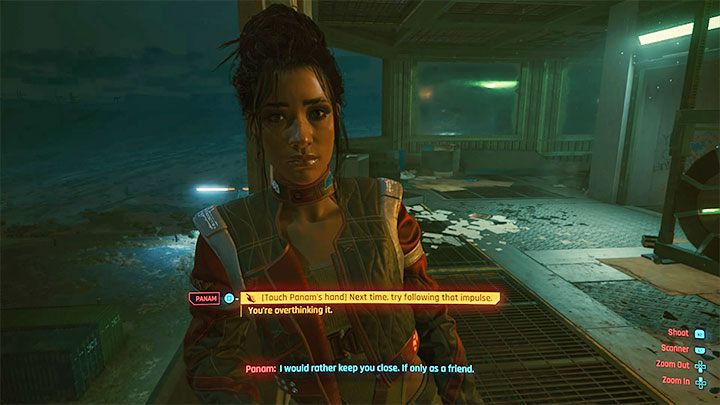 Later in this quest Panam and V will reach the control tower by the tracks. After the tower is completed, a conversation with Panam will be initiated. You cannot choose the dialogue option that states that you are helping Panam for financial reasons, because Panam will simply get angry and the chances of continuing the affair will be lost. You can choose any other dialog option.

At the very end of the conversation, you can optionally touch Panama's hand. 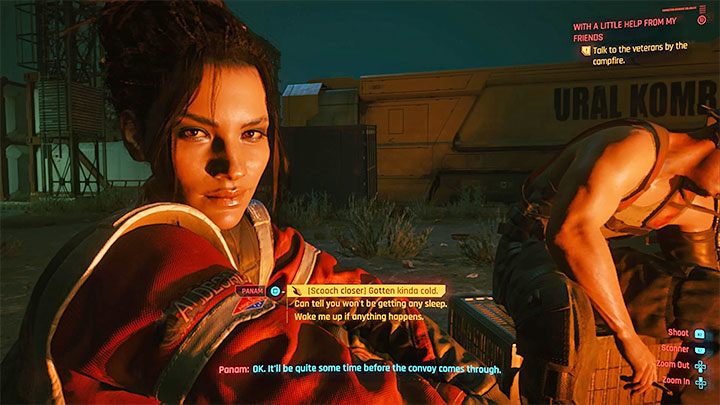 During this quest, you'll also meet Nomads that gathered around a fire. Your actions during this meeting are not crucial to your chances of getting involved with Panam later, but it is still worth taking the opportunity to hug Panam. 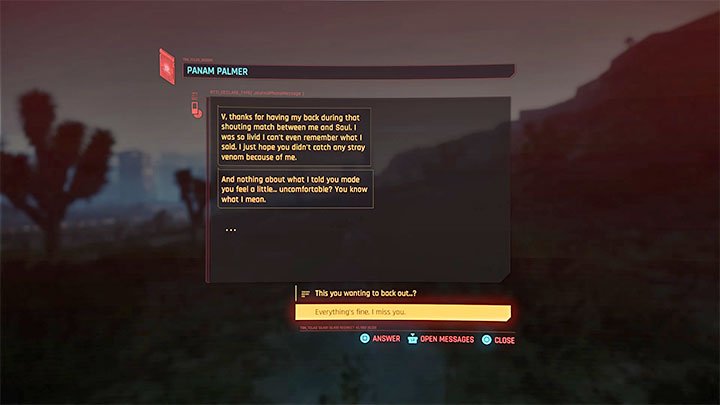 In the interval between the second and third quest Panam can send V a message. Your answer (e.g. that you miss her) does not have any effect on the course of the romance.

Similar messages can be received after completing the entire storyline, but they are also irrelevant. 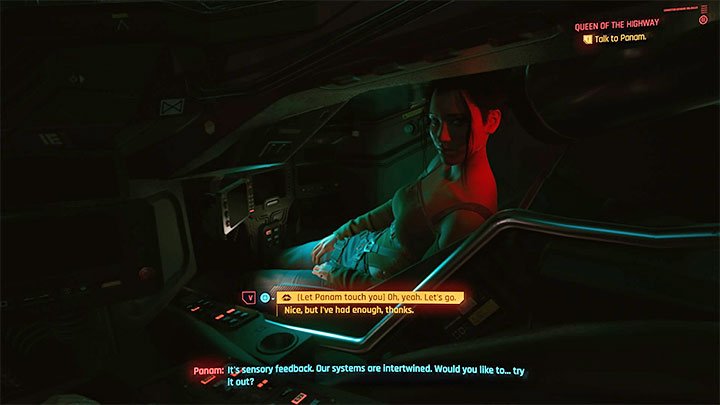 Panam's last story mission is the Queen of the Highway in which V is learning how to control the Basilisk. Animportant choice appears after a section where you are learning the tank controls. Panam will inform V about synchronizing your nervous systems. You must agree to Panam touching you. 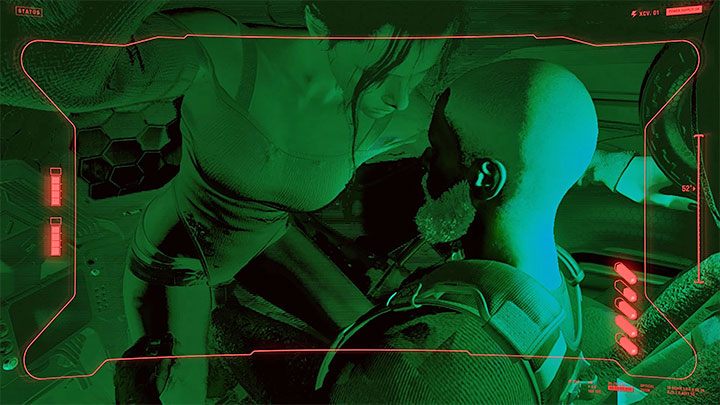 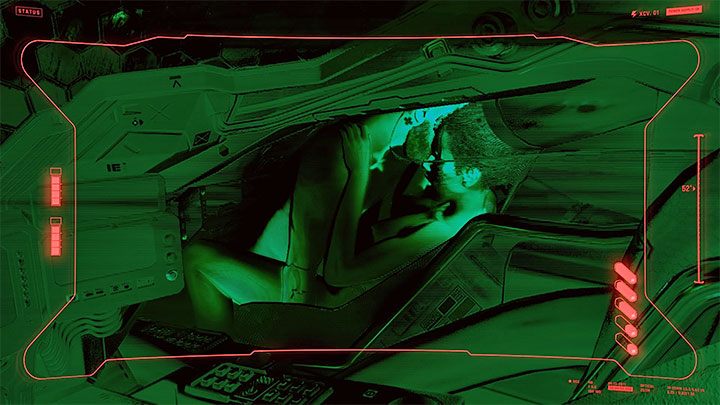 If you agree, you'll activate a sex scene, which will be interrupted when enemies appear. If you refuse, you will miss your chance of getting involved with her. 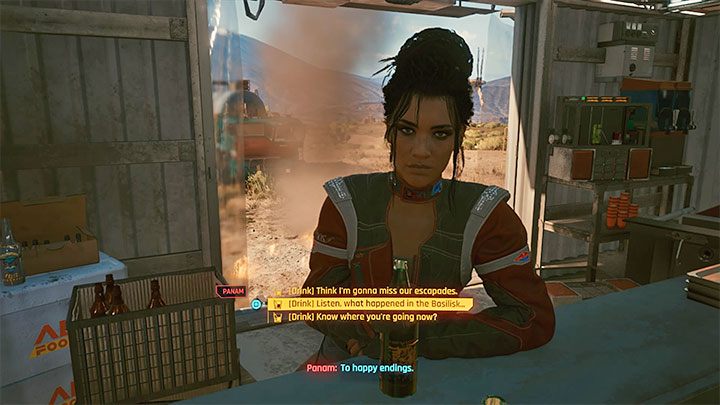 After winning the battle you will meet Panam in a bar and you can refer to the hot scene in the tank. Panam will offer V an option to stay with the nomads, but you can't agree to this now. This is a choice that is made only in the campaign finale. 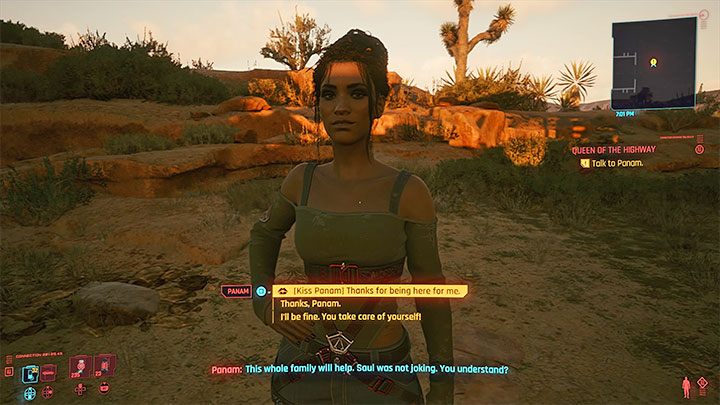 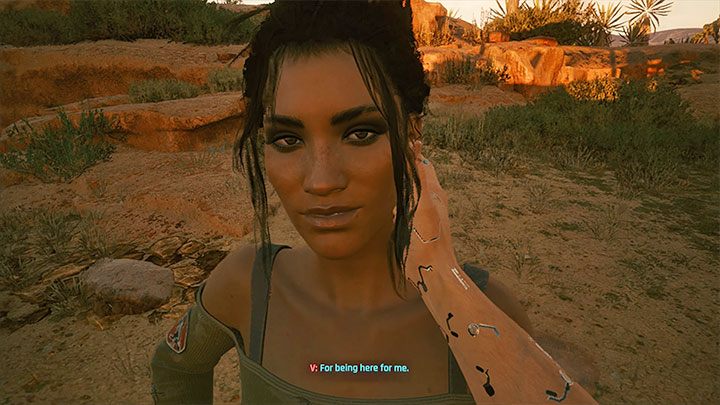 At the very end of the quest there is an opportunity to kiss Panam goodbye. If you have correctly executed all the previous steps, V and Panam will become a couple, i.e. they will form a serious relationship. This way, you'll unlock additional ending variants.

Romance with Panam - influence on playthrough 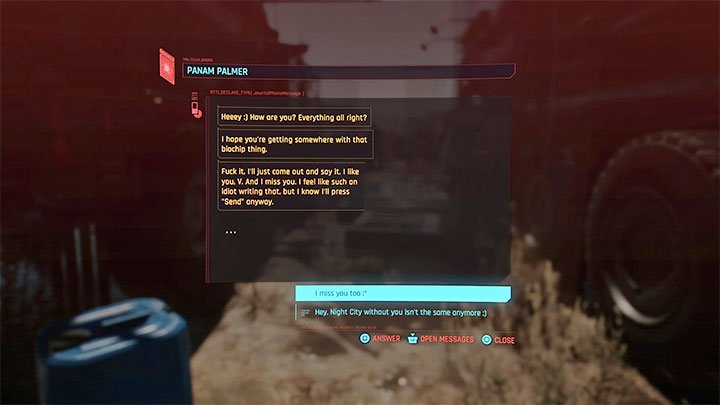 Once the Panam storyline is completed and the relationship is formed, she can contact V and send text messages. However, the answers chosen in them doesn't mean much. The relationship with Panam won't suffer because of the chosen dialogue options.

If you have managed to play your cards with her correctly, Panam may appear in the game's finale and her presence may change the outcome of the campaign in the epilogue.