On this page of our guide for Cyberpunk 2077 you will find a detailed walkthrough for the mission called The Pickup.

Maelstrom stole a prototype Flathead combat robot from Militech. The gang leader with whom Dex had a deal was replaced by another man, Royce, who may not be willing to keep the word given by his predecessor. As if that were not enough, one of Militech's corporate agents is looking for the robot on her own to find the device before her bosses find out she lost it.

When completing this task you can decide whether to use the contact to the agent you received from Dex or solve the case on your own, using force. However, you need to know that your decision has certain consequences. 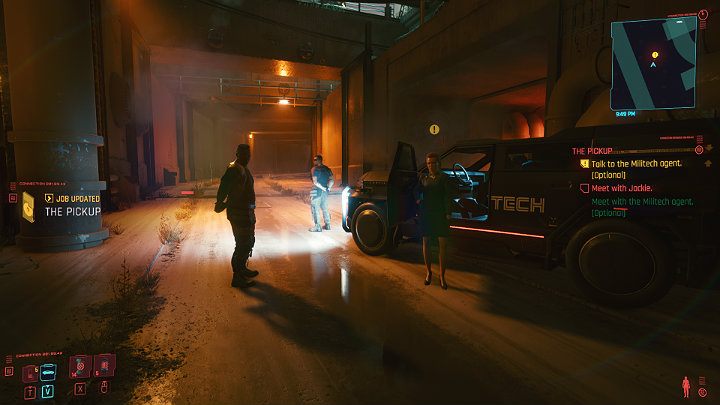 At the very beginning of the task, Dex will give you an optional solution, with participation of Meredith Stout - Militech's agent. When you call her, the woman will agree to a meeting in the storm drain at Skyline Drive. 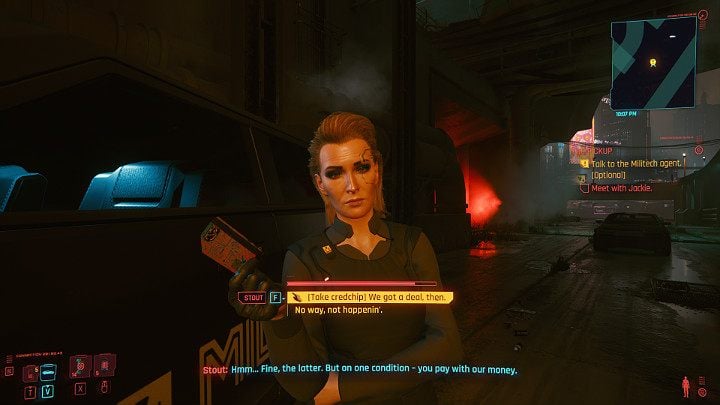 As soon as you try to say hello to Meredith, her bodyguard will rough you up. V will be stunned and then connected to a probe. Meredith will start asking questions, and when you lie she will know about it. The dialogue options available at this stage of the game may look different, depending on the origin of your character. Meredith wants you to pay for Flathead with a Militech card. There is, however, a problem - the credchip is infected by a virus.

Do you need to hack the Militech chip?

No. You can use the infected card to make the transaction and help Meredith Stout achieve her goal or not pay for the robot at all.

Militech chip - how to remove the virus? 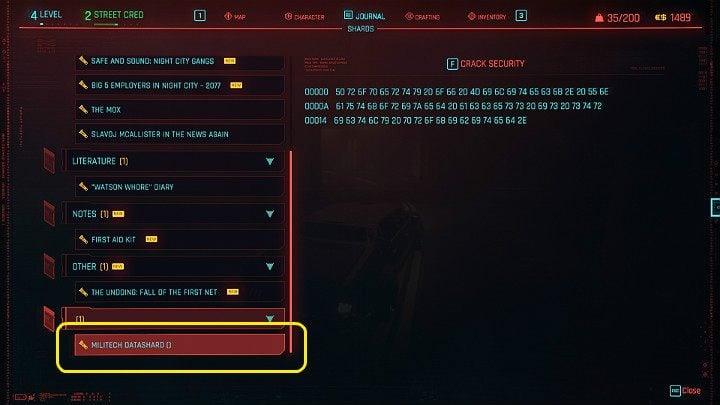 Open the main menu and then go to the splinter panel. Go to the bottom of the list to find the splinter with Militech data. You will see three strings of incomprehensible code. Press the button responsible for entering security cracking. 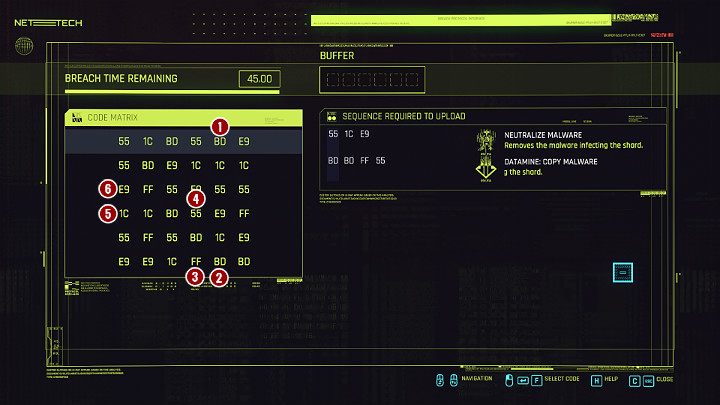 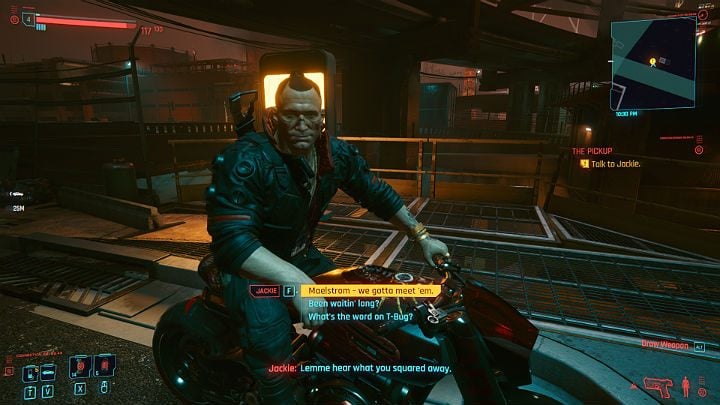 Whether or not you decided to meet Meredith Stout earlier, head to All Foods magazine to meet up with Jackie. During the conversation you can ask him about various things, such as a motorcycle (if you are a Nomad). If you have developed your character's technical ability, you will receive an additional dialogue option related to motorcycle tuning during the conversation with Jackie. This may be useful when performing a later side quest. 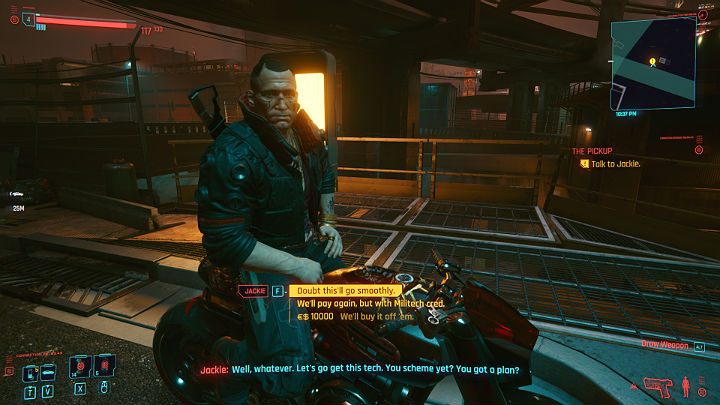 The main purpose of the conversation with Jackie will be to prepare a plan for the meeting with Malestrom.

Get to main production floor of All Foods 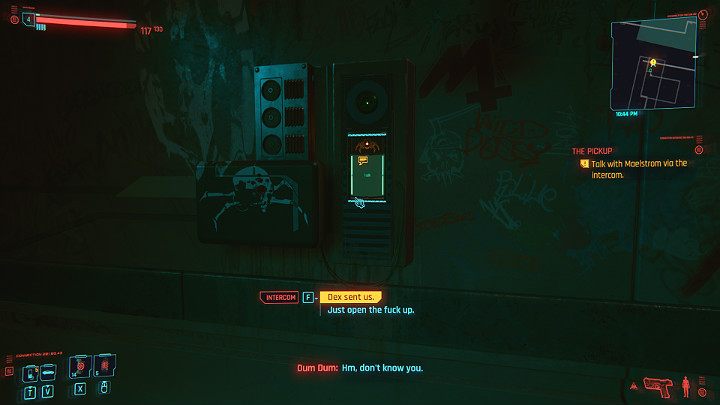 The entrance to the Maelstrom area will be without any surprises. All you have to use the intercom and say that Dex sent you and the warehouse door will be opened immediately.

If you detonate a mine, tear out a turret or just attack a gang member before you reach the warehouse, Maelstrom will be hostile to V and Jackie. 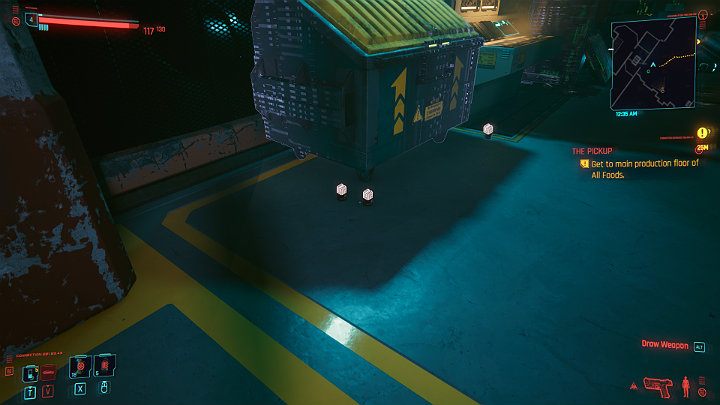 To get to the main hall, just follow Jackie. On the way you will be able to pick up some additional stuff. After you enter the spacious room where the gang members sit, you don't have to head straight to the elevator. It is better to snoop around a bit and collect additional equipment that may be useful at a later stage of this task. 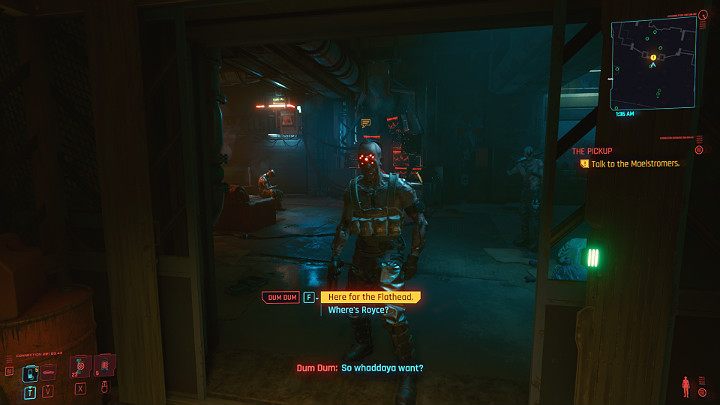 When you get to the right floor you will be greeted by Dum Dum. Say you are coming for the Flathead bot, and Dum Dum will tell you to sit on the couch.

Dum Dum will order Jackie to sit down and he will refuse, leading to a conflict. If you do not use the quick dialogue option to calm your companion down, all hell will break loose and you will lose the opportunity to complete the mission peacefully. 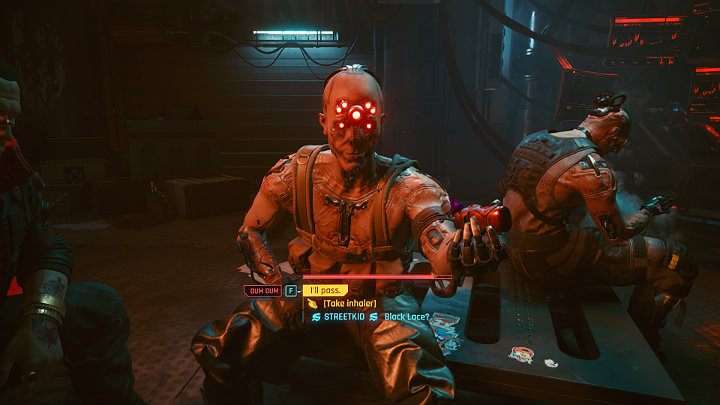 Dum Dum will offer V a drug inhaler. You can use it or politely refuse - it will not matter. If you have decided to choose the origin of Street Kid, you can mention a drug called Black Lace during the conversation. If you choose to peacefully complete this mission, Dum Dum will give you his inhaler when leaving the warehouse. 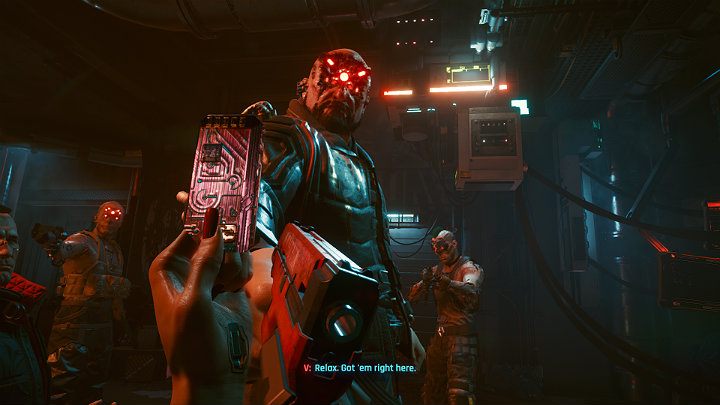 One of the gang members will bring the bot. Ask Dum Dum for a small demonstration of its capabilities. When V says they are taking the robot and have already paid Brick for Flathead, Royce will come. During this conversation all answers will be timed. Depending on your choices, you can side with Maelstrom or Militech.

You side with Maelstrom and rat on Meredith

If you want to take Malestrom's side, pay with the card from Meredith and warn Royce that Militech is sitting on his tail and that the chip you paid with is infected. 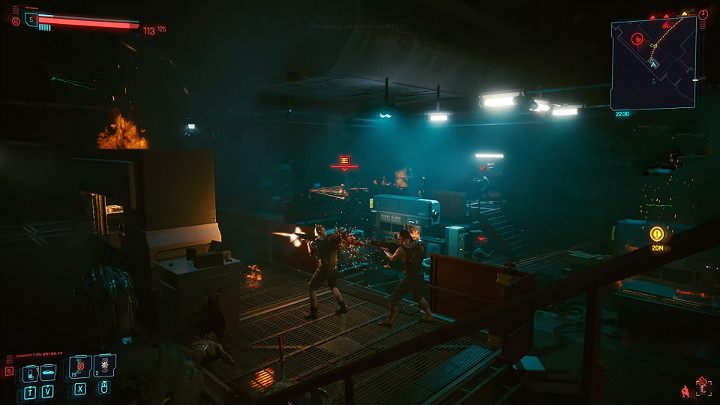 Militech will storm the warehouse and Dum Dum will want to help you escape, leading you to a service shaft. All gang members will be on your side and will provide support in the fight against Militech, distracting them. 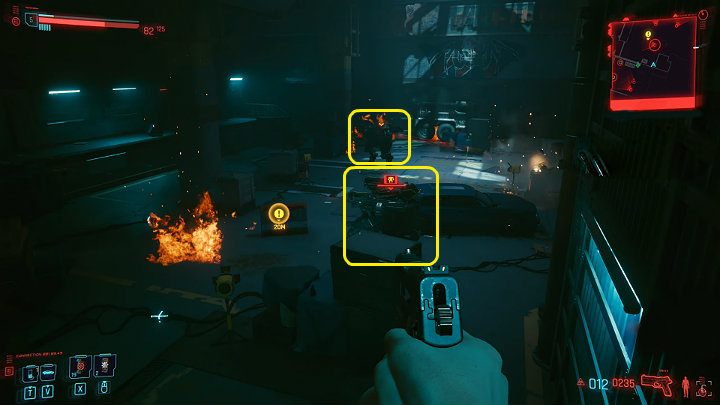 When you get to the big production hall, the gang members will open a shortcut for you, so you can reach the spot where you'll fight two Minotaurs a bit faster. In battle you will be supported by gang members so it will be much easier to defeat Militech's forces.

In order to cause as much damage as possible, try to aim at the upper part of the mechs, at the man controlling the robot. 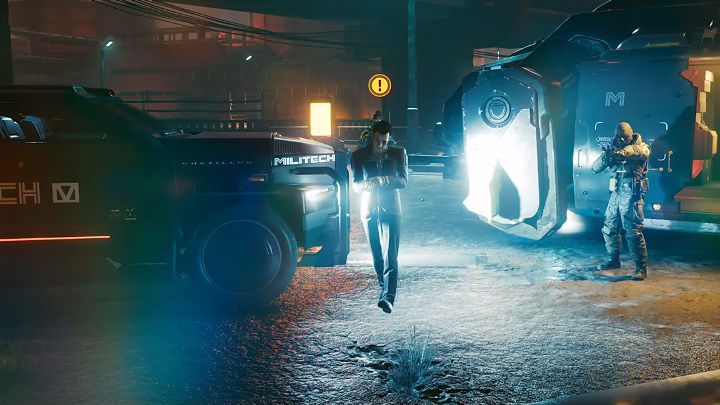 When you go outside, Anthony Gilchrist will be waiting for you, apparently no longer a prisoner of Mrs. Stout. The man will mention that if you'd cooperated with Meredith Stout, he would be dead now, so he owes you his life. In return, he lets you go free. Meredith will no longer interfere in Militech affairs, her time is literally over. 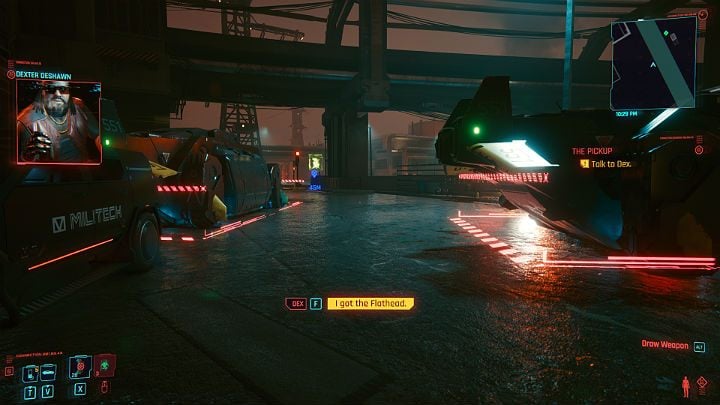 After you talk to Gilchrist, talk to Jackie and then call Dex to let him know how the deal with Maelstrom went.

If you want to take Militech's side and help out Meredith Stout, you can solve the issues with the Maelstrom gang in several ways. 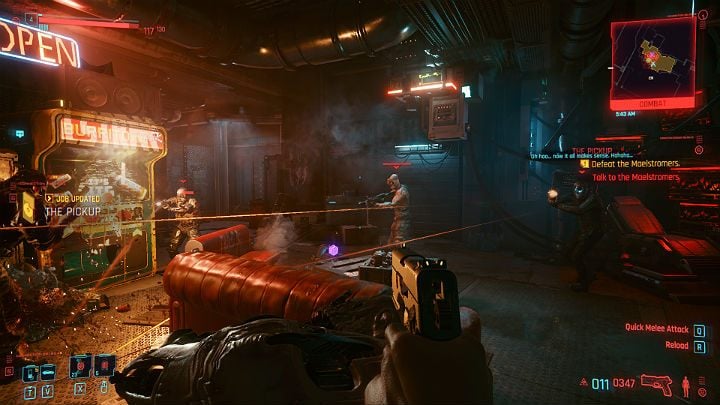 Attacking the Maelstrom is connected with a shootout and escaping through the service shaft. All members of the Maelstrom gang will be hostile to you and you will have to eliminate them to reach the exit. 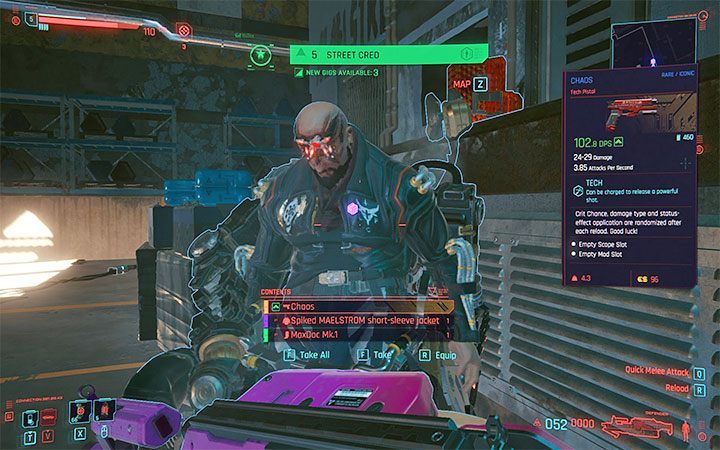 This will also lead to an optional boss fight against Royce, in a powered armor, if you have not liquidated him during the negotiations.

The battle with Royce is described in detail on a separate page of our guide, in the chapter titled Bosses. 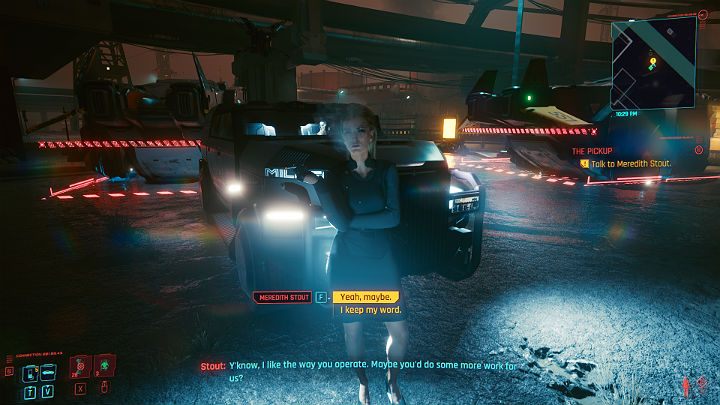 When you go outside, Meredith Stout will be waiting for you. The woman will say that she likes the way you solve problems and will express her willingness to continue working together. Talk to Jackie, then call Dex to report back on the job.

You solve the case yourself 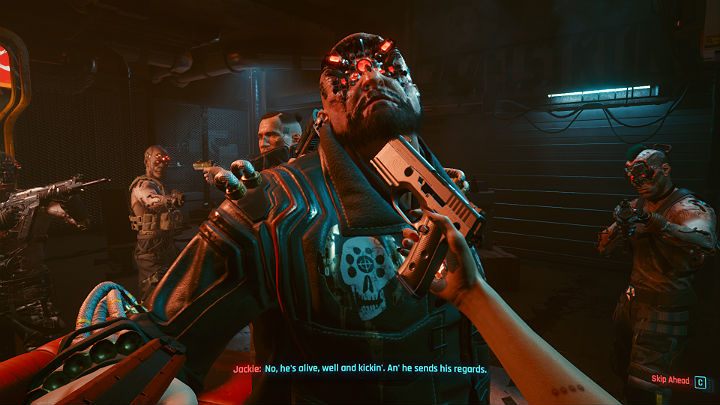 If you have not used Meredith Strout's help and do not have the money of your own to pay for Flathead (peaceful conclusion to the job) you will be forced to start a fight with Maelstrom. Militech will not help you in the fight so you can only count on your own skills and Jackie. 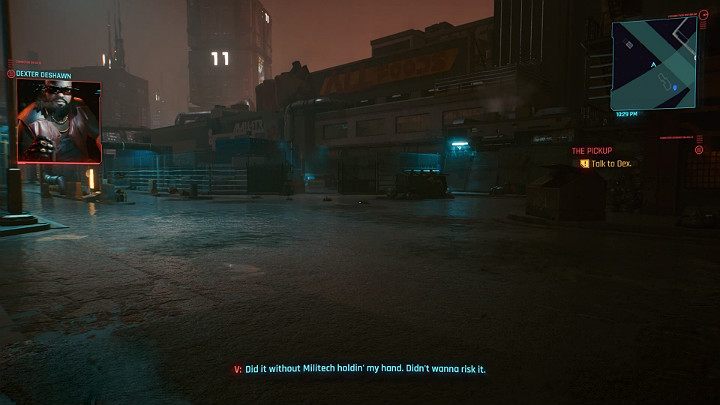 When you get out of All Foods warehouse, talk to Jackie, then call Dex and let him know that you got the Flathead on your own because you didn't want to take any risks with Militec.

While escaping from All Foods warehouse, you can find and save Brick, the previous Maelstrom boss. If you want to help him, you have to keep in mind that this will affect a subsequent optional task, related to power struggle in Maelstrom. 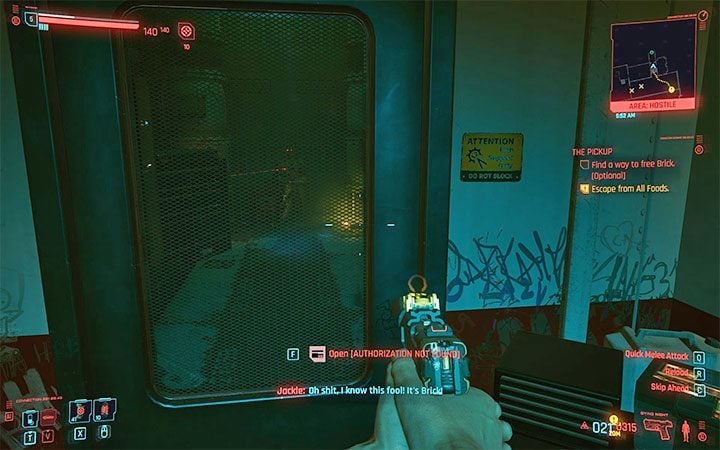 Brick is kept in a closed room, which can be seen in the picture above. The entrance is blocked so you will have to open it. 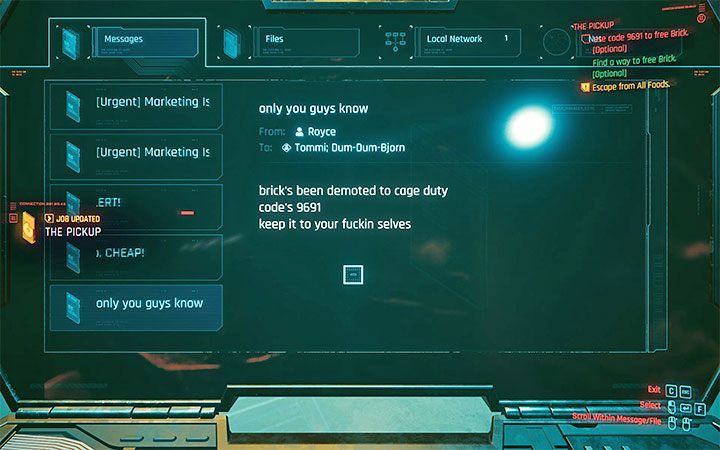 You will find a laptop nearby, turn it on and start browsing messages from the inbox. One of them contains the code for the door: 9691. Enter the code on the numeric keypad at the door to enter. 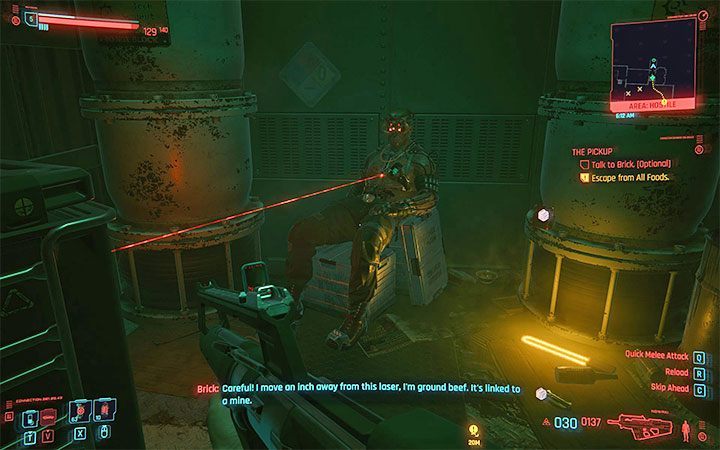 Brick was effectively immobilized by a laser trap that can detonate a mine as soon as it senses a false move. For Brick to get out of this alive you have to disarm it and you can do it in several ways. 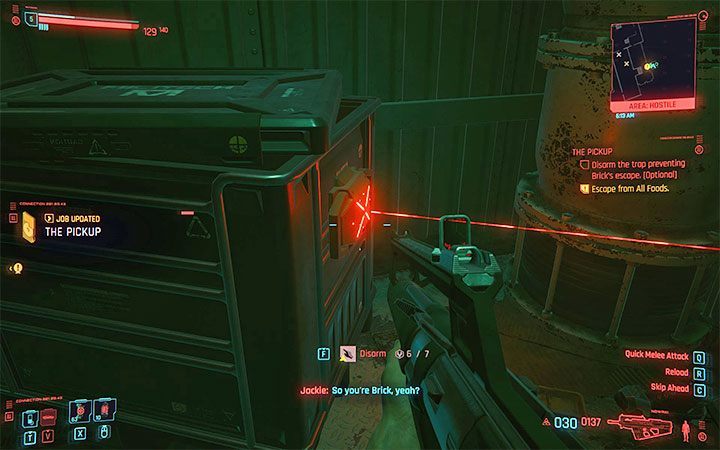 The first way is to examine the mine and disarm it, but it requires at least 7 points in Tech Ability. 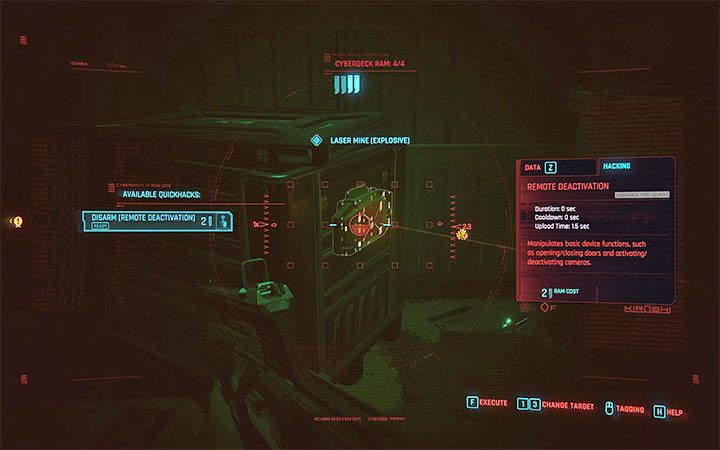 The second way is to turn the scanner on and try to disarm the mine by hacking - the disarm action uses 2 RAM. 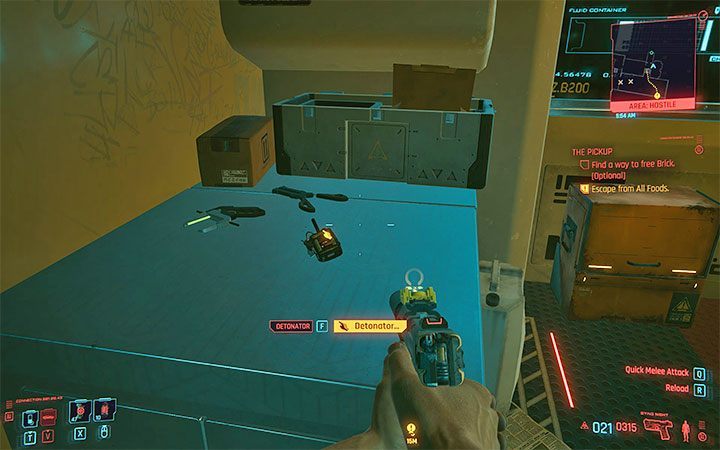 The third way is to go back to the previous area and find the detonator. You can choose the option to disarm the mine.