On this page of the Cyberpunk 2077 guide, you will find a walkthrough of the main quest The Nomad. This is an introductory quest to the campaign of V when Nomad past selected.

The consequences of choosing the main character's past are described in more detail on the page Character origin - does it matter?. You will find introductions for Streetkid and Corp on separate pages of our guide.

Talk to the mechanic 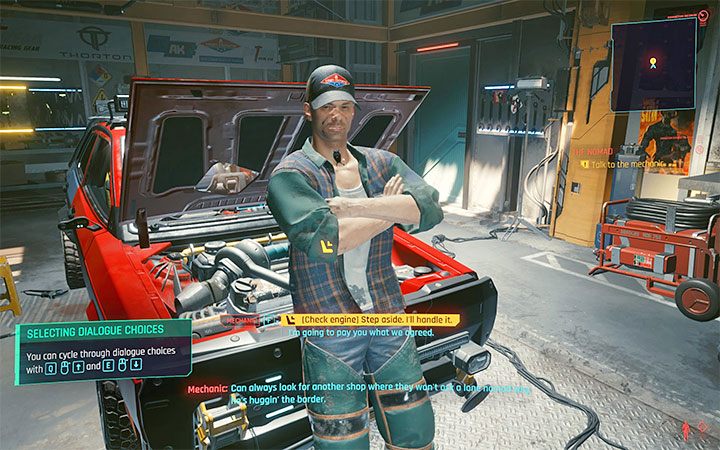 You start the game in a car repair shop in Yucca in Badlands, standing in front of a mirror. Remove the badge of the nomadic clan, with which the character parted ways.

Approach the main character's car. Talk to a mechanic and then look under the mask. A temporary repair option will appear.

Get in the car 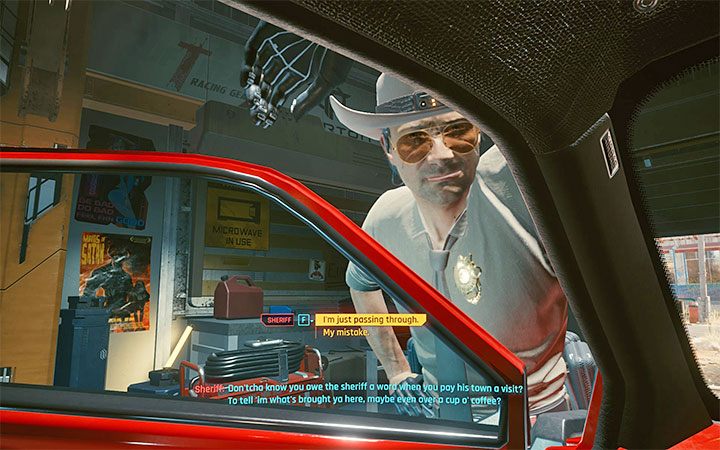 Take the driver's seat and start the engine (it takes several attempts to do it). Connect to the radio station.

When you are trying to leave the garage, local sheriff Andrew Jones will appear. You can be polite when talking to the sheriff or more harsh. The selected dialogue options won't provoke the sheriff. You don't have to rush responding to the sheriff's questions. No matter what option you choose, you will be able to drive out of the garage.

Go to the telecom tower 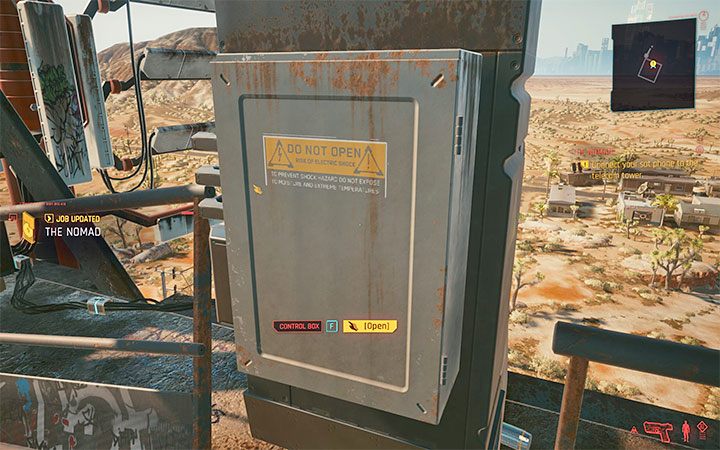 The telecom tower is located nearby the gas station where you started. When you get there, get out of the car. Approach the gate and select the option to open it with a kick.

Start climbing. You don't have to get to the top of the tower, but one of its upper balconies. Ultimately, you need to get to the control box. Open it and connect to the tower system to talk to McCoy.

Head to the meeting place 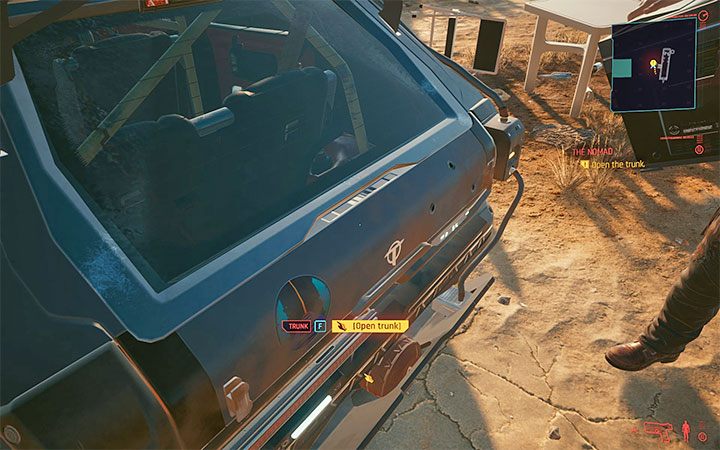 Get off the tower and get in the car. Your destination is located east in the Dry Creek area. Enter the trailer in the wilderness where is Jackie Welles. During the conversation with Jackie, you will find out about the errand to transport the cargo to Night City.

Return to the car and open the trunk to place the cargo in it.

Drive to the border 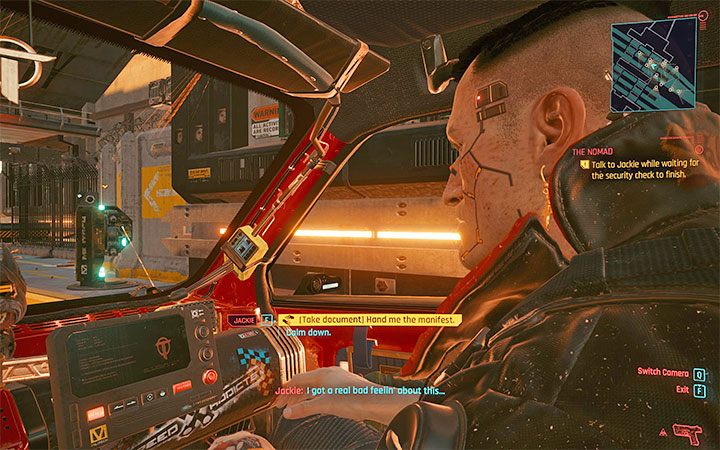 Get in the car and after Jackie joins you, take the main road north towards Night City. You have to reach the control station on the border between the city and Badlands.

Stop before the first barricade, wait for the checkpoint to open, and drive into it. Take a document about the cargo and credits to pay the bribe from Jackie. 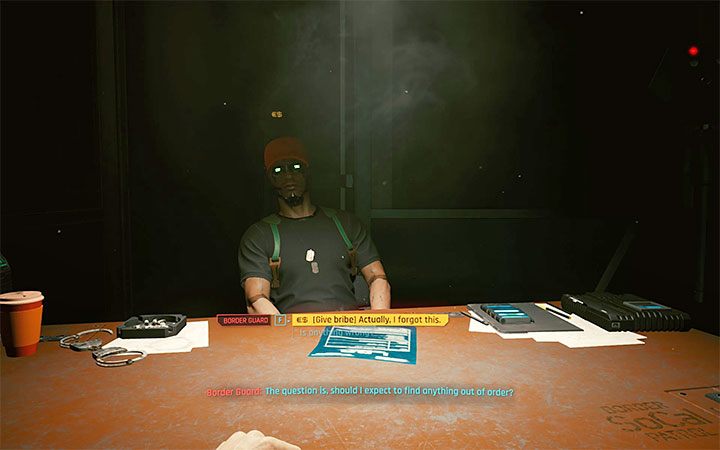 You will be asked to get out of the car. Enter the building on the right. After entering, surrender the weapons to a man in the side room. Go to room 2 to speak with the border guard.

Start by showing the papers to the guard and then give him a bribe - credits received from Jackie. After the inspection, pick up your weapons and return to the car. Take a passenger seat.

Fight off your pursuers 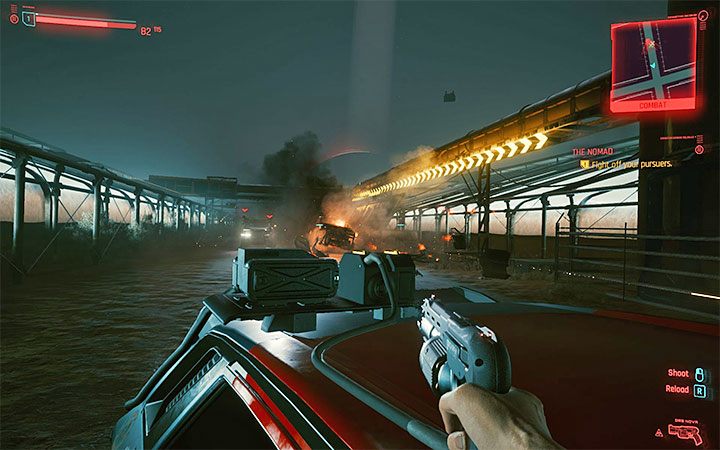 Soon after driving away from the border, hostile vehicles of corporate employees sent by the border guard will appear.

You must lean out of the window and start firing at enemy machines. You don't have to aim exactly at the drivers. If you hit the vehicles, they will explode quite quickly. 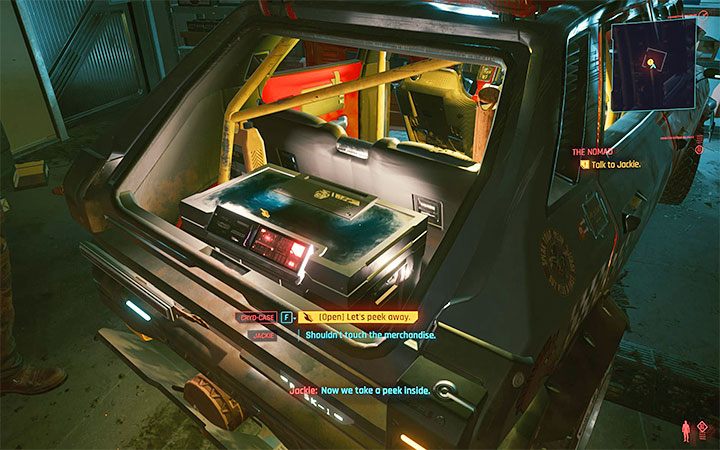 Soon after you manage to lose the chase, Jackie will reach the garage where he will hide the car. Talk to Jackie and wait until he opens the trunk. Open the cargo to discover its contents. Try to touch the iguana.

The quest will soon be over. After watching the cutscene, a new main mission - The Rescue will begin.