One of the most important mechanics available in Cyberpunk 2077 is combat. It consists of many aspects because the game has a wide range of weapons, skills, perks and implants. You don't always have to shoot at anything that moves. The game has a stealth mechanic – useful when you want to kill enemies quietly. This will make you even more fearful – your enemies will never know when you will attack them. 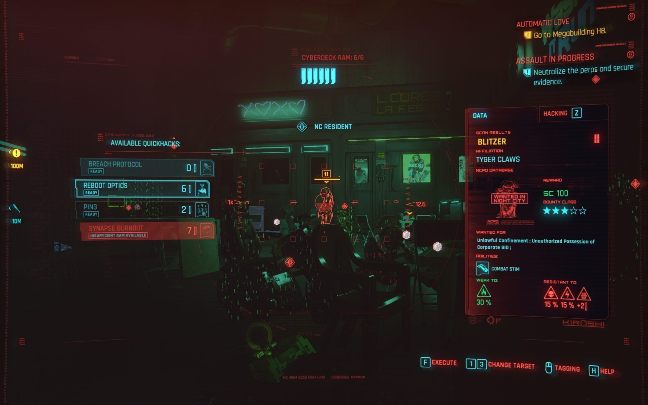 Before starting a fight, you can perform a small reconnaissance, which will help you in fighting opponents. However, this requires an eye prosthetic –Kiroshi Optics. It allows you to turn on the scanner at any time, zoom in images, scan opponents or objects. Thanks to this mechanic, you can see the enemies' weak points, skills, and rewards for defeating them. 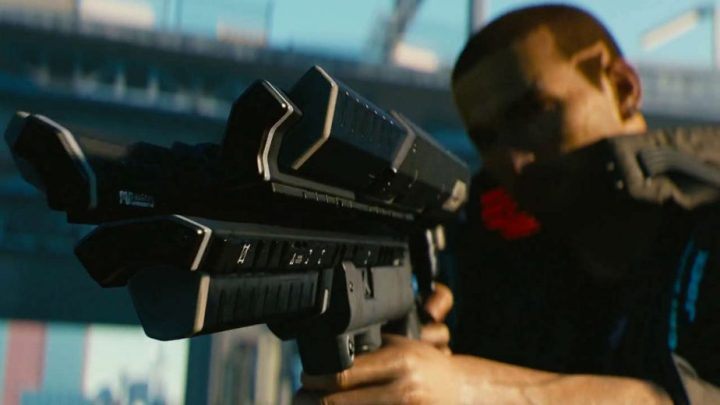 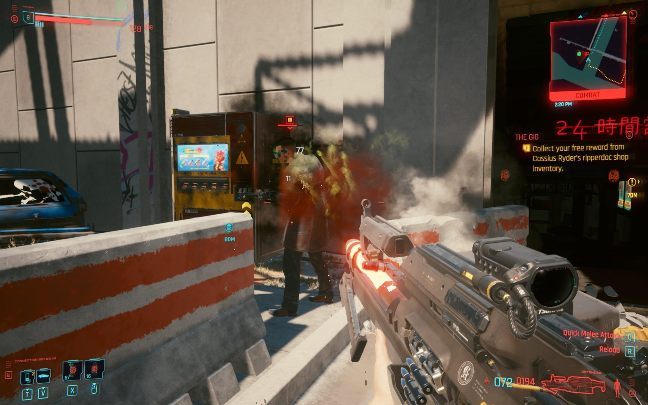 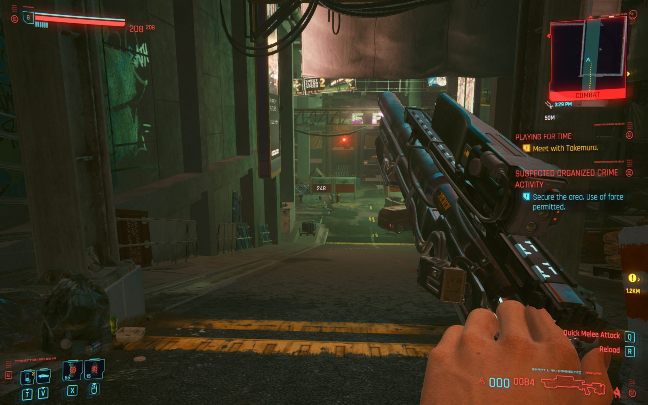 Thanks to them you will be able to kill enemies from far away. You can attack them frontally or shoot from behind covers. The combat style depends only on your preferences.

However, you cannot carry all your with you. You can have only three weapons with you – the game counts both firearms and melee weapons. You don't have to worry about their type – you can even carry three sniper rifles.

You can switch the weapons however you want, depending on your current situation. Remember to prepare yourself for everything. However, you should also keep your playstyle in mind. If you like to make chaos, choose rifles and shotguns to shoot enemies with accurate shots that pack a punch. If you want to eliminate enemies without revealing your position, choose sniper rifles and pistols. This way you can quickly eliminate opponents. However, this requires you to have a perfect aim perfectly – you want to shoot enemies in their weak points. 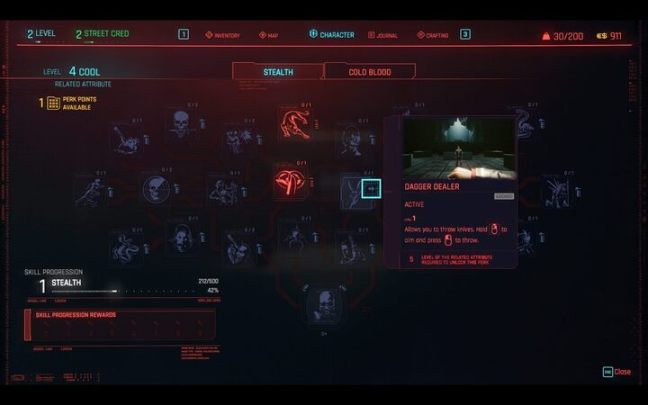 Dagger Dealer attribute will help you in ranged combat. Thanks to this ability you can throw knives at opponents. It is a great way to start a fight or to finish off an enemy.

You aren't able to use two weapons at the same time (the so-called dual wielding).

Skills in Cyberpunk 2077 are developed over time by performing the appropriate actions. This means that your character becomes stronger as the game progresses. 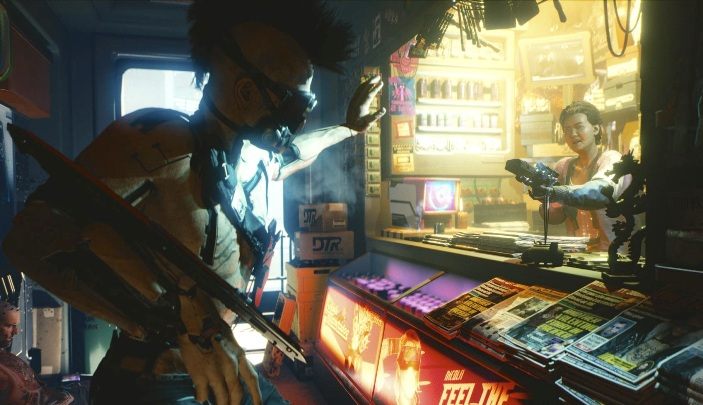 Your hero not only eliminates enemies with firearms but also melee weapons. You will find numerous knives and katanas useful in close-quarter combat. 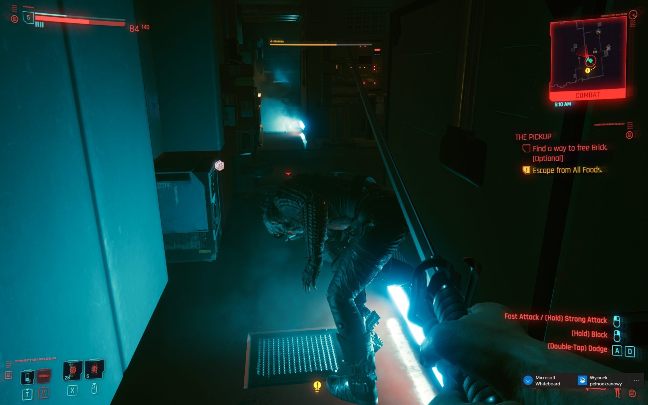 As in the case of firearms/ranged weapons, you cannot carry everything with you. Your character can only have three melee weapons, but remember that these are the only three weapons you can carry with you. You don't have to worry about their type – if you love fighting with a katana, you can use only this type of weapon.

You can switch the weapons however you want, depending on your current situation. It all depends only on your imagination and preferred combat style.

Remember that melee weapons consume stamina, which affects your movement and speed. Always keep an eye on its level to avoid unnecessary damage or making it easier for enemies to attack you. 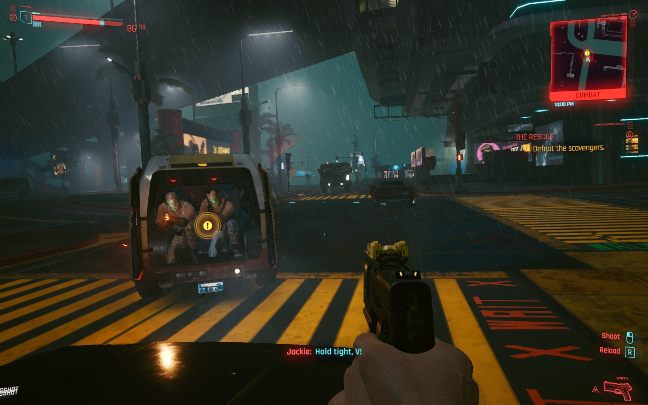 You can also shoot your opponents as a passenger. Just lean out the window and aim. You can also choose the weapon you want to use to eliminate the opponents. However, you can't do that when driving a car. 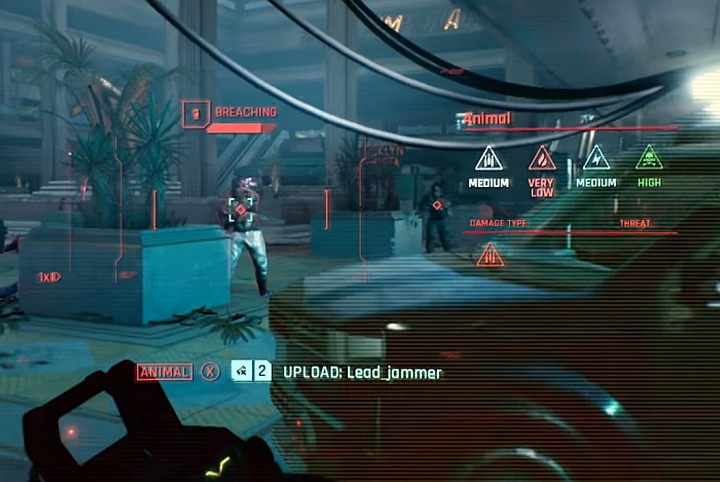 Hacking is a separate skill that you can develop on your own. With its help, you will open closed doors, for example, to get the money from a locked safe. You can also influence opponents, so they will be armed or attack each other. Extreme cases of hacking can also make the hacked opponent commit suicide.

If you want to learn more about hacking, check out the Hacking page. 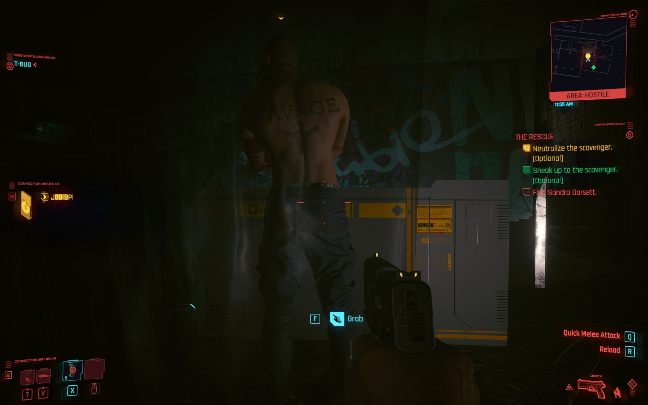 Hacking opponents is not the only way to eliminate them while hiding. You can try to sneak up on an enemy and grab them. Then, V can make that enemy lose consciousness or break their neck. Both options allow you to get rid of an opponent without alarming the whole neighborhood.

If you want to learn more about this way of elimination, check out the separate page of this guide.

You can also grab opponents after starting a fight. You will be able to use them as living shields. After winning the battle, you can stun or murder the grabbed enemy.

Implants, which you select yourself, will have a huge impact on the combat. Thanks to modifications of your body, you can strengthen your eye-sight (to see the weaknesses of opponents), use blades (inflict additional damage) or create an implant allowing you to stick to vertical surfaces. 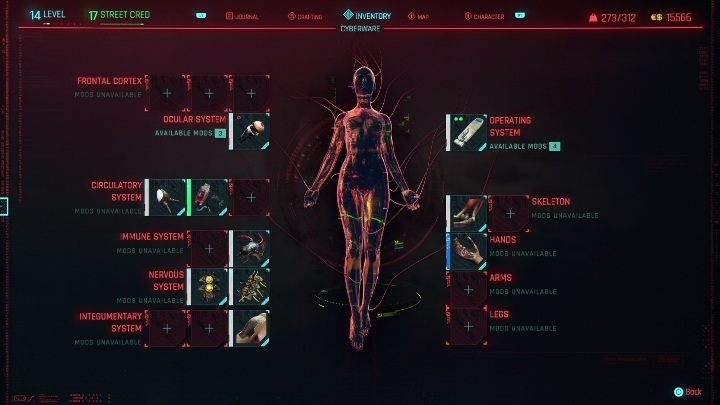 Some of the implants will affect your perception of the world, others will only affect your statistics, e.g. the speed of restoring health points or the amount of damage you get after falling from height. 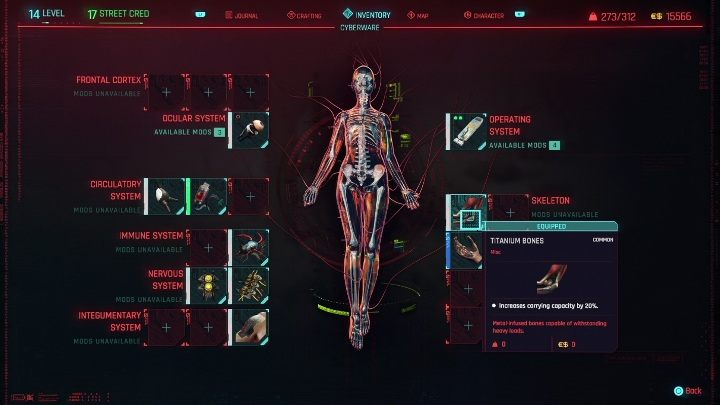 You can buy the cyberware from a ripperdoc. However, pay attention to the experience level and Street Cred requirements. If your current level isn't as high as the one required, you won't be able to get a given cyberware.

If you want to learn more about implants, check out these pages:

Can you finish the game without killing anyone?

Yes. The developers promise that most of the weapons that we find in the game can be improved so that they will only stun enemies. Thanks to this, you will be able to play the game without killing anyone.

Moreover, opponents can be knocked down, strangled and made unconscious. Even if your character is forced, for example, to fight with a boss, after winning you will be able to neutralize that enemy without killing.

If you want to learn more about stealth and eliminating opponents quietly, check out this page.

The controlled character has resistances to various types of attacks and environmental dangers. The most important resistances in Cyberpunk 2077 are:

The higher the resistance, the less chance that V will receive serious injuries. If the resistance is low, you need to be careful not to get into contact with this element or enemy specializing in dealing specific type of damage.

Nanowire is one of the most interesting pieces of equipment that can be used for stealth kills or hacking opponents. It can function similarly to, e.g. garrote, but is also used to hack enemy implants from a distance. This allows you to neutralize your opponent without taking the risk of approaching them.

This allows you to neutralize your opponent without taking the risk of approaching them. 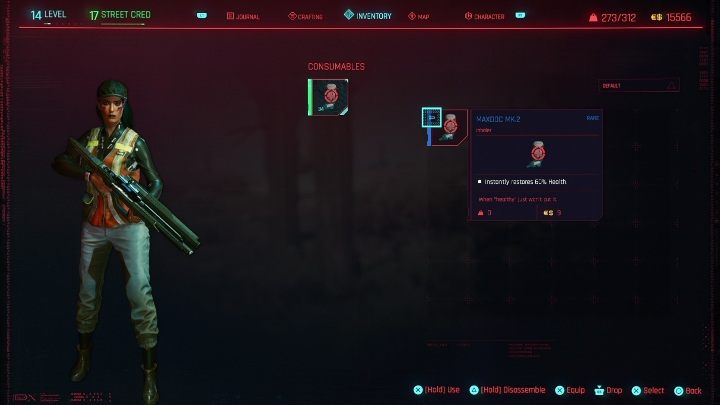 Health in Cyberpunk 2077 can be regenerated in a few ways. This helps you have control over your health. You won't have to worry that you will die during even the most challenging fights. 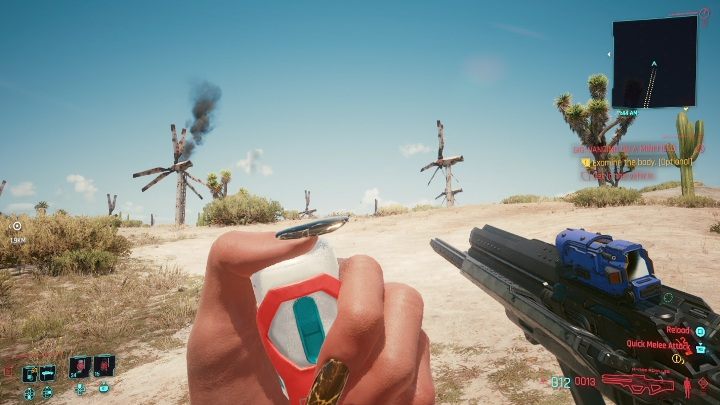 You can regenerate your life with: 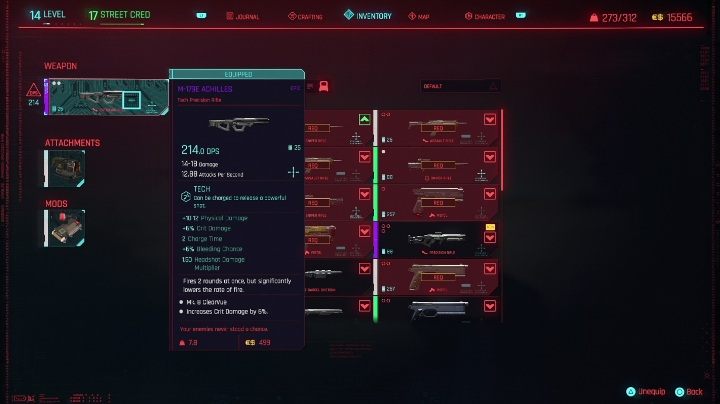 In the game you will find:

Remember that weapons scale with the attributes. Depending on what attribute you invest in, you will be proficient in different weapon types.

If you want to learn more about attributes, check out the separate page. 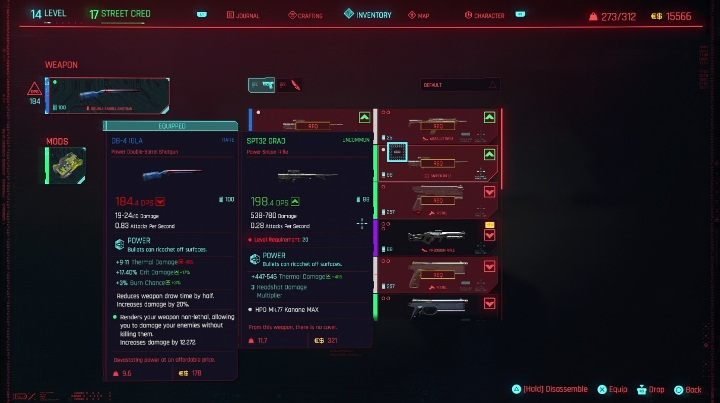 Each weapon and clothing available in the game has a specific quality tier. The rarer the item, the better the statistics and more slots for modifications. You will get more valuable items from bosses and legendary opponents.

The rarity tiers in the game: