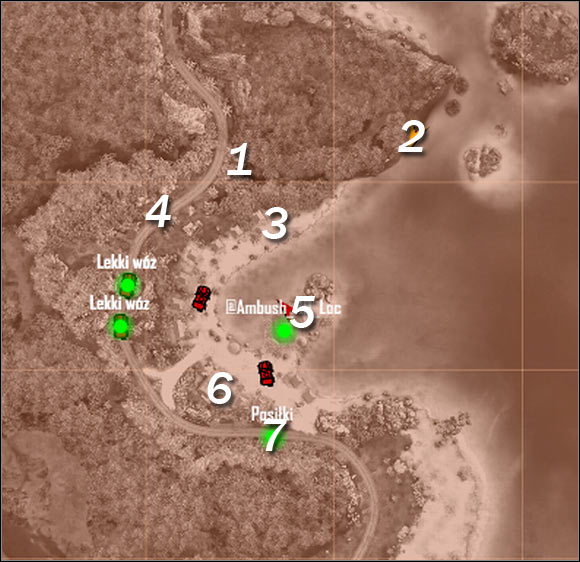 3 - first goal: humvee on the beach

Important! There is no one good way to secure the base and to eliminate all enemy units. I would recommend that you focus on one area at a time and avoid being seen by the Korean soldiers, especially before an enemy gunship has arrived. Check my map to know where to look for enemy troops and read the description to find out how to get rid of them.

1) Humvee on the beach

Let's start by focusing on a humvee which has been parked on the beach. It's going to be much more difficult to get to the humvee if you chose approach from the water. The most important thing for you to remember about is to get to the shore as soon as possible. Hide in the woods and start using camouflage. If you're starting near an observation point (screen), you'll have to jump over the railing and slide down carefully. Use maximum strength here to avoid sustaining major injuries. 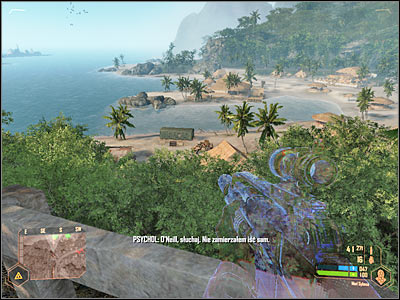 I'd strongly recommend that you approach the humvee from the west, because enemy soldiers are facing other directions (north and east). Surprise them with a little help of your cloaking device (screen). I would recommend killing them from the inside of a nearby hut, so you won't have to worry about being seen by anyone else. 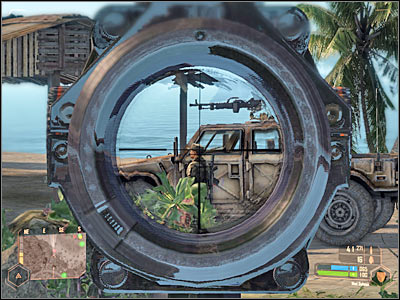 Notice that in the meantime an enemy gunship has appeared over the bar (target number three; screen). DON'T ATTACK THE HELICOPTER, even if you have a rocket launcher at your disposal. It's best that you remain undetected. Thankfully, the gunship will leave this area once it's unloaded a small group of soldiers. 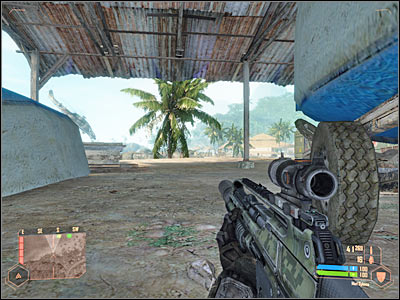 2) Checkpoint near the main road

I would recommend that you leave this checkpoint for the end of the mission, because it's going to be very difficult to secure it without raising suspicion in the main camp. There are at least three enemy soldiers here and they're guarding two vehicles (screen). If you can't eliminate them quietly, consider using grenades, especially since they're standing relatively close to each other. It would be a good idea to prevent them from shooting a flare if you're going for a more subtle approach. 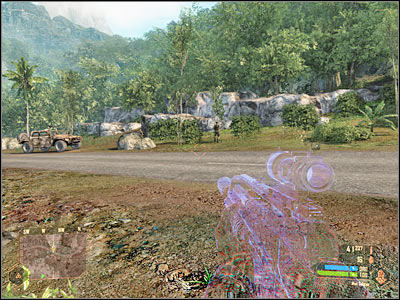 I assume that you'll have a lot of problems securing the bar. First of all, you will have to know that there are several machine gun posts around the bar, especially in the north. If you have a silenced weapon with a scope, try taking out at least one gunner from a larger distance (screen). Otherwise you would have to approach the bar from the west, because this is the weak spot in enemy defences. 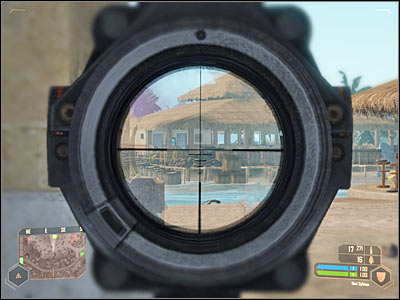