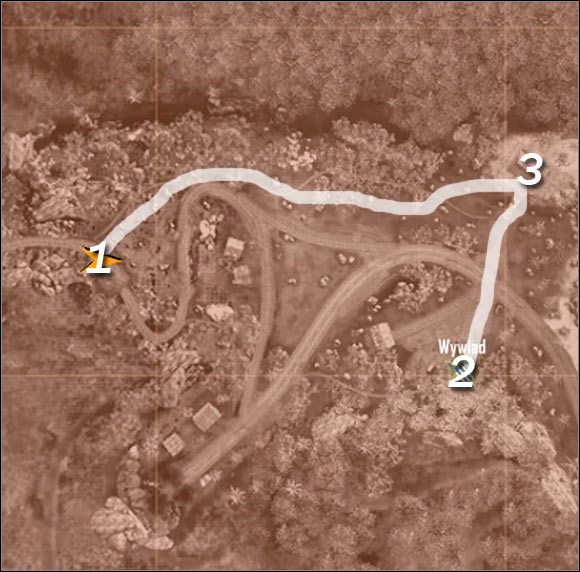 Important! This is a side mission, so it means you won't have to fulfill it. Nevertheless, you shouldn't ignore it, especially since you'll have to explore the area around the trailer anyway.

I wouldn't recommend attacking enemy units from the top of the hill. It would be too risky, especially since an enemy humvee is patrolling this area. Instead, activate cloak and proceed to your left (screen). Stay away from the main dirt road and you should be just fine. Don't forget to recharge your armor each time it's been depleted due to usage of cloak. 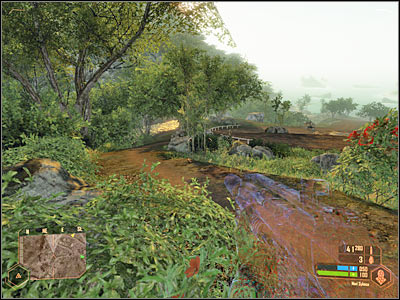 Head south and eventually you should come across a humvee (screen). If you don't have anything against choosing a more direct approach, you may consider using it to attack and eliminate enemy units. I would recommend that you ignore it and keep moving south. Stay off the stream, because you would be exposed to enemy fire there. 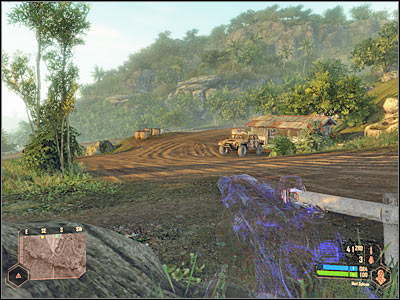 Your next target is a small bar which is located to your left (screen; 3 on the map). There are at least two enemy soldiers here and it would be a good idea to get rid of them as soon as possible. Try avoiding unwanted attention, because one of the soldiers may fire a flare and that would result in enemy reinforcements arriving in this area. You should be fine as long as you're using camouflage properly. It's also a good idea to use your personal map to locate enemy troops. Once you've won, check the area and you should find some interesting pistols, called AY69. They're one of new weapons included in "Warhead". Take two pistols, because the guns are going to be held in separate hands. There are also explosive chargers here, as well as Claymore mines. 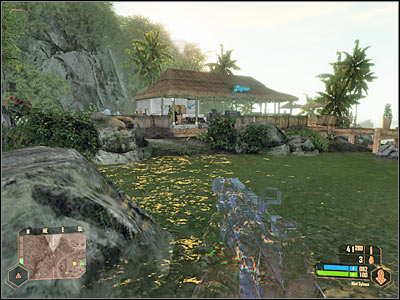 Notice that a large armored vehicle has been parked in front of the bar (screen). You weren't able to use these machines in the previous game, so I guess I should tell you that this vehicle is EXTREMELY useful. Obviously you should enter it as soon as possible. Start using the minigun to eliminate all nearby troops. Some of the Korean soldiers are hiding near the trailer and there's also an enemy humvee to the west of your current position. I would recommend that you maintain a safe distance, so you won't have to worry about enemy units returning fire. Notice that your minigun has an unlimited ammo supplies, but you must prevent it from overheating. 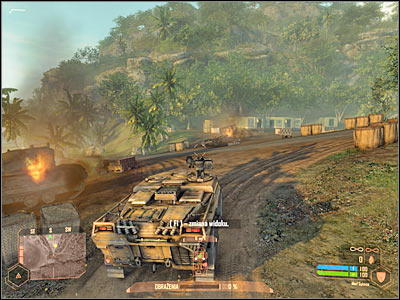 Once you've killed all enemy units, make a stop near the designated trailer. Exit the armored vehicle and enter the trailer. All you have to do is to find the computer (screen) and to press the action key (F by default) in order to acquire necessary data. Go back to the armored vehicle instead of waiting for new goals to be added to your list of assignments. 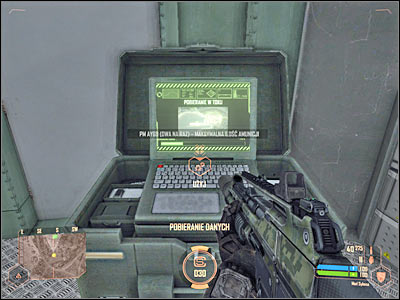