After you regain consciousness, you will have to take part in a longer cut-scene. You can look around, but you can't move your character. Eventually you will have to engage in a duel with general Kyong. Once you've regained full control over Nomad, activate camouflage and hide somewhere to your left. 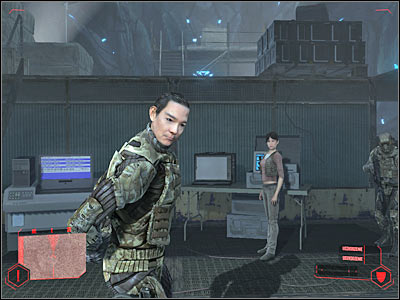 This is going to be an extremely easy challenge, mostly because general Kyong won't be able to find you when you're using cloaking device. Additionally, he will remain on the upper platform. As a result, you will be allowed to explore the surrounding area safely. Just make sure you're using camouflage and you should be fine. Start off by picking up a SMG machine gun.

Make sure that you have checked the surrounding area for weapons and ammo. You will find a shotgun (screen), as well as a sniper rifle. I wouldn't recommend taking the rifle, especially since you'll find better weapons soon enough. Don't forget to reattach upgrades to your shotgun.

When you're ready, find the stairs and proceed to the upper platform. Obviously you should be using camouflage, so you'll be allowed to surprise Kyong. Use your shotgun and you'll kill him almost instantly. Prevent him from responding to your attacks by firing at him without any interruptions. Thankfully, shotgun is a very powerful weapon, so you won't even have to reload this weapon while fighting Kyong. 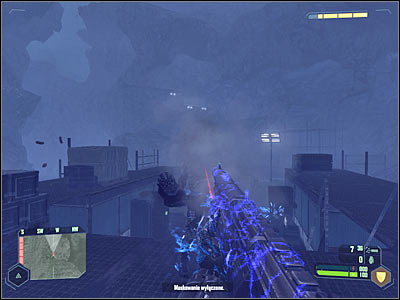 You could consider picking up Kyong's minigun, however you will find a more useful weapon very soon. Once you're ready, proceed towards the elevator. Talk to one of the hostages. You won't have to do anything else here, so focus only on listening to the conversation. 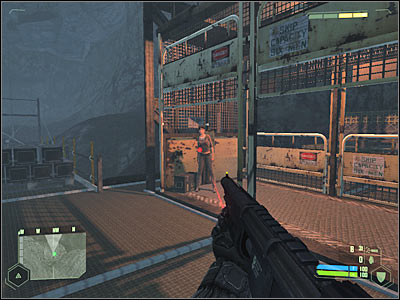 You won't be able to prevent some of the future events from happening. The good news is that the hostage will be rescued by the crew of an allied plane. The bad news is that your main character won't have an opportunity to escape along with the hostage. Furthermore, your elevator will crash down. Get ready for the next mission . 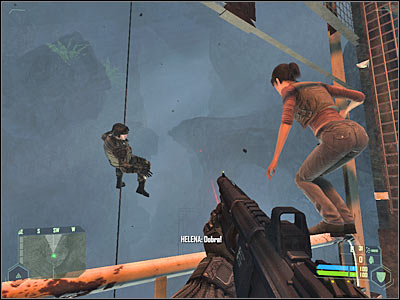