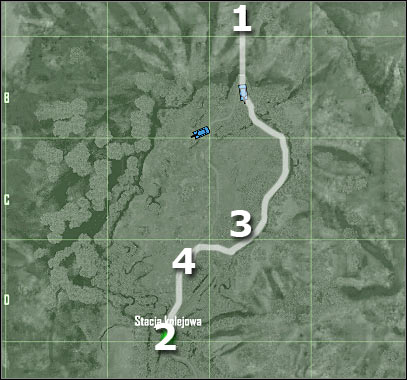 3 - checkpoint on a top of a larger hill

Before we'll go into details, there are a few things you should know about:

1) You only have a few rounds for your main cannon, so you should consider conserving this type of an ammunition. You won't see the problem early during the course of the mission, but it's going to get more difficult later on. As a result, neutralize weaker targets with your machine gun.

2) You may exit the tank at any time. In most cases, this is a very interesting possibility, especially if don't want your tank to take on too much damage. You should also know that you'll switch to a second tank once you've reached the train station.

3) You don't have to be in a lot of hurry. Watch out not only for other tanks, but also for soldiers equipped with rocket launchers, especially since you won't notice them at first glance.

4) You won't have to worry about enemy forces using machine guns. Only rocket and tank rounds can damage your armor. Try maintaining it in a good shape, especially since it's very easy to lose a lot of armor points in one battle.

Once you've regained control over your main character, use the tank and proceed towards the tunnel exit. You won't have to worry about other allied tanks. Focus only on staying alive. 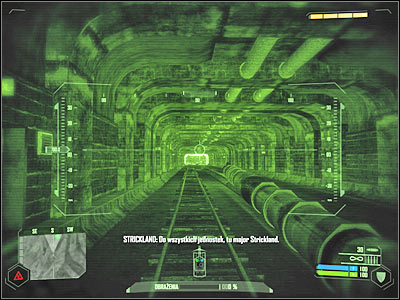 Once you've left the tunnel, stay on the train tracks. As a result, you will have to go left. You won't encounter any hostile units right away. The first enemy tank should appear to your right (screen). Fire the main cannon at least three times in order to destroy it. Make sure that you didn't sustain any damage here. 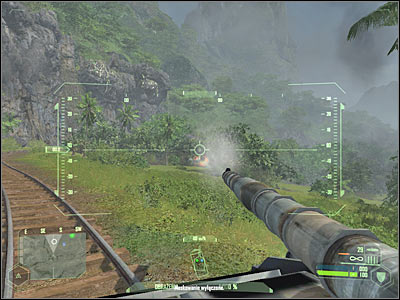 The second tank will be guarding the train tracks, so you must take it out as well. Just as before, make sure you weren't hit, because you'll have to kill a lot of enemy targets before switching to a second tank. Keep heading south. You'll probably encounter a few soldiers along the way. Ignore them or eliminate them with your machine gun. 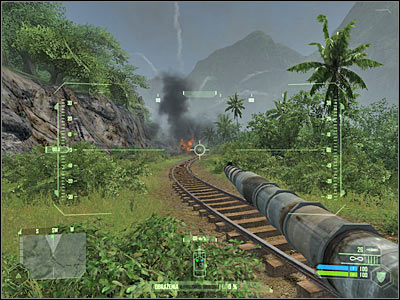 You should be getting closer to a much larger hill (3 on my map). You must be extremely careful here, because for the first time you'll encounter soldiers equipped with rocket launchers. You won't have to worry about your supplies just yet, so you may consider firing at them from a main cannon (at least 3-4 times). If you don't want to risk damaging your tank, leave it and take them out from a larger the distance. Obviously you will have to use a scope. 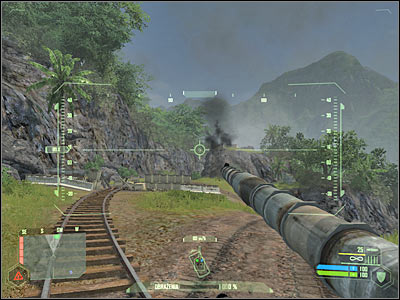 Make sure that the coast is clear before you decide to move on. Use the tank to get closer to this hill. You will have go around a small barricade (screen). Eventually you'll go back to the train tracks. Keep heading towards your current destination. Turn the main turret to your right, because you're going to have to eliminate a third tank. If you don't want to waste too much time here, allow some of the allied tanks to deal with this problem. 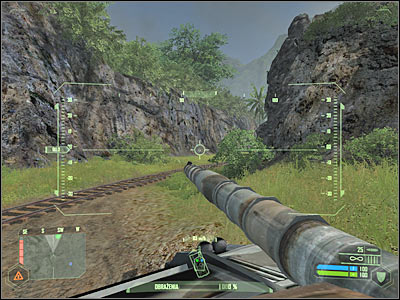