I would recommend going to the north. There are a lot of trees and bushes in this area, so make sure that you've used them for cover. You must be very careful here, because this area is being patrolled by at least one group of enemy soldiers. If you plan on attacking them, use your shotgun and hide behind larger objects (preferably trees and boulders). Keep heading east. There's a small pathway here (screen). 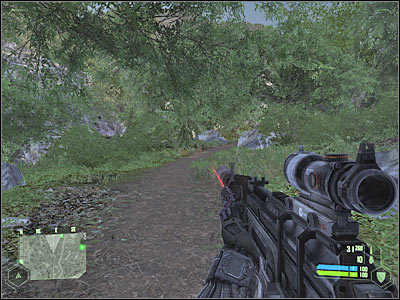 You are getting closer to a large gas station. It can be found to the south-east. You've got two choices here - you can either ignore the gas station and try to avoid enemy soldiers or you can aim at the fuel tanks. As a result, there's going to be a huge explosion (screen) that will kill most of the Korean units. Deal with the rest on your own if you want to. 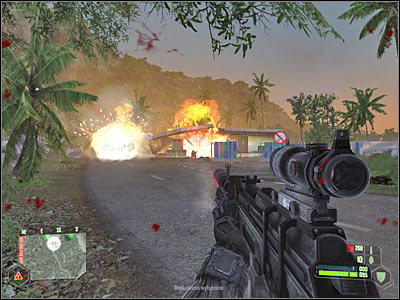 Be careful. The explosion might have alerted some of the nearby enemy units. As a result, it would be a good idea to activate camouflage instantly. I had to deal with soldiers who came from the north. Make sure that you don't leave anyone behind. Keep heading towards the first AA unit. You should stay close to this small passageway, so you won't get lost. 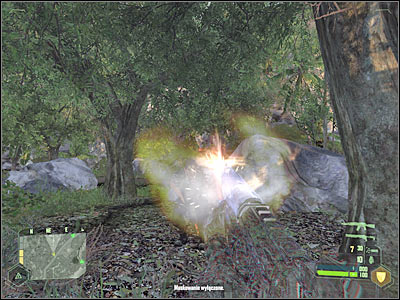 It would be a good idea to stay close to the northern edge of the map. You won't have to use your cloaking device all the time. You are getting closer to a small hill. Keep heading east. You will have to reach an upper ledge at some point of the game (screen), so make sure to use maximum strength there. 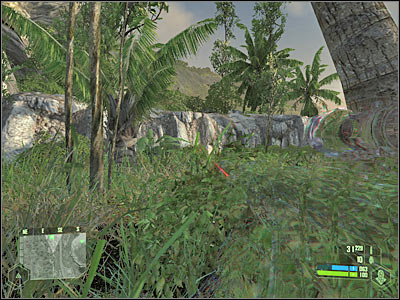 You are probably very close to the first gun, so you should start using cloaking device in order to avoid being seen by anyone. You shouldn't encounter any hostile units here, but it's better to be safe than sorry. Slide down and make a few steps forward. The AA unit is being guarded by several soldiers and you'll have to deal with them in the near future. 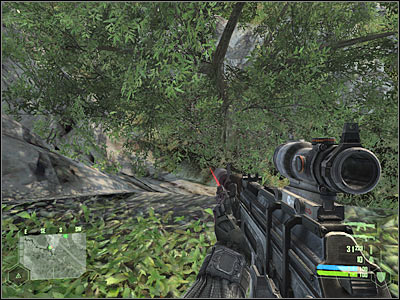 I would recommend using a cloaking device in order to approach the AA unit safely (screen). You won't have to destroy it right away. Instead, plan your next moves very carefully. Hide near the AA gun and wait for the power bar to regenerate itself. 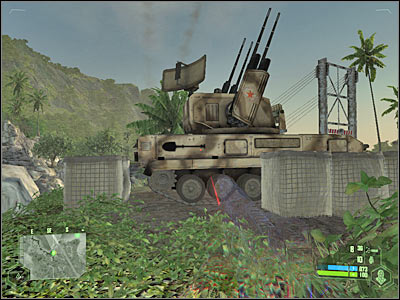 Enemy soldiers are standing to the south and to the south-east of the AA unit. You will have to kill them all. I wouldn't recommend using a cloaking device here, because you won't have to worry about raising any alarms. Shotgun will do the trick, especially since you'll be allowed to use the AA gun for cover. Make sure that you've secured the area around your first objective.