Teaming up with Jester 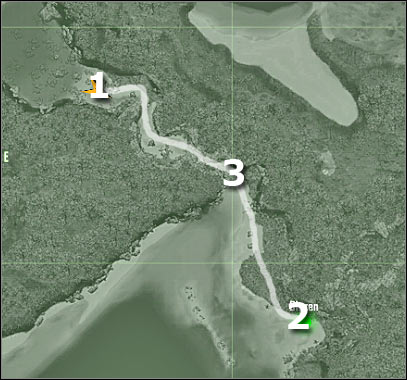 Obviously you'll start the game standing on a small beach. You won't encounter any enemy soldiers for at least one minute, however you should modify your default gun right away. It's going to be a SCAR rifle. Press the C key in order to activate an interesting menu. I would recommend choosing a tactical adapter and a silencer. You should also change the firing mode to single shots. 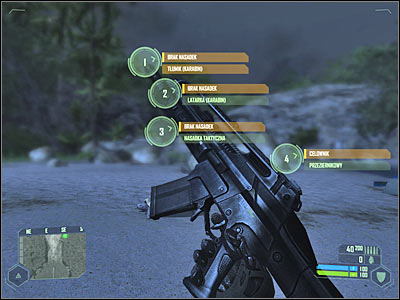 Start moving forward. You're surrounded by rocks from both sides, so you really can't get lost. Like I've said before, you won't encounter any soldiers, so you won't have to be moving carefully here. Look at the screen, because that's where you'll have to practice using a crouching stance. You may also consider laying down on the ground entirely. New hints will familiarize yourself with melee hits and picking up objects. 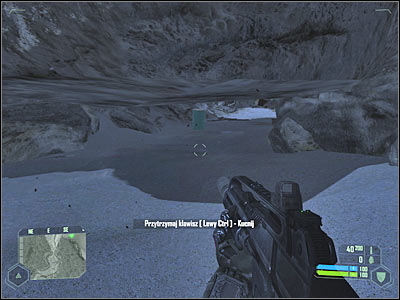 You'll soon reach 3 from your map. You will probably receive a warning here that an enemy soldier is patrolling this area. It would be a good idea to practice using a cloaking device. You can access it from the main menu of the suit (hold the middle mouse button). Wait for the guard to get here and surprise him by shooting him in the head (make sure you're using a silencer!!). You could also try and stun him with a melee hit, however it won't be necessary. 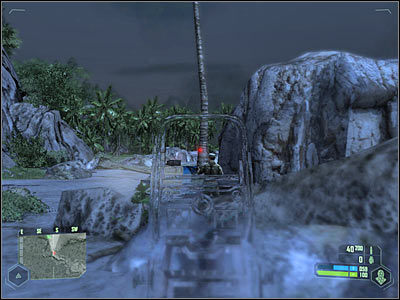 Now you should consider moving forward. There are some rocks to your left and it would be wise to use these objects for cover. Two enemy soldiers will arrive in this area. I'd strongly recommend getting rid of them using an element of surprise. For now allow them to get closer. You should also wait for your suit to regenerate itself. 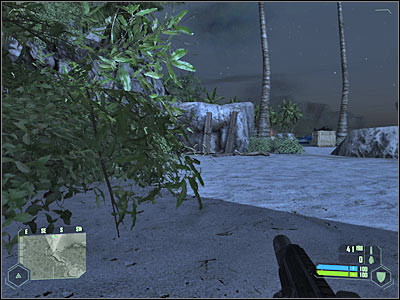 Move over to your left, so you won't have any problems finding the soldiers. You may attack them right away or try to surprise them from one of the flanks. Either way, focus on aiming at their heads. If you're lucky, you'll only lose two bullets here and you won't raise an alarm. Make sure to check their bodies, because they were carrying excellent rifles, called FY71. Take one of these guns and modify it right away. Use the exact same upgrades as with the SCAR rifle. 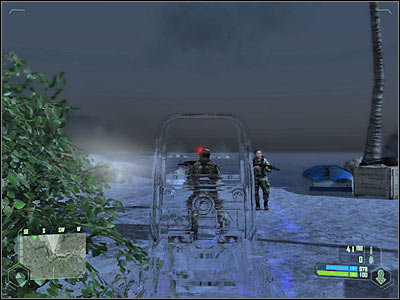 You may ignore the red flare, because you won't encounter any other hostile units in this area. Instead, keep moving towards Jester's location. I wouldn't recommend staying on the beach. Instead you should turn left and head on into the jungle. This is a very safe shortcut and you won't get lost. Head over to Jester and wait for the game to give you a new task. 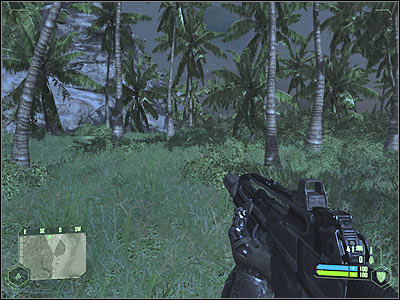