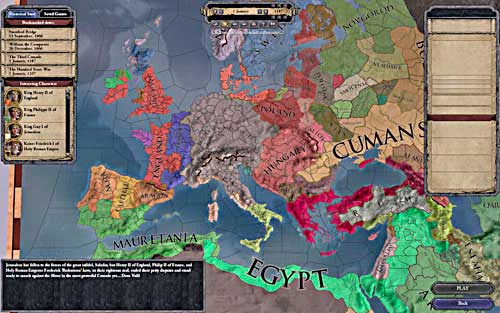 The Third Crusade is also a sandbox. There are no wars (at least at the beginning) and there are no forced goals. You can do whatever you want.

England, France, Germany and Hungary are countries who are busy with their own affairs and don't have to take part in the events on the Near East. In principle, they have no interest there any no claims. That's why play those factions as in sandbox: make yourself a goal and try to fullfill it. 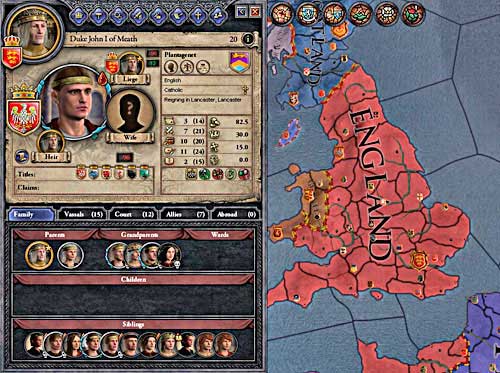 At the beginning, decrease number of descendants.

Independently from what you want to do, begin from calming subordinates. You can distribute titles and bribe subjects. When it's done, you can start normal gaming. What is worth to say, that the most of vassals have no descendants so their lands will be yours again after their death. Sometimes it's useful to speed up their kicking the calendar.

Jerusalem is a real sieged fortress: playing this fraction means constant defending against hordes of infidels. It's problematic, because most of your kingdom is also muslim, and revolts often. That's why fast converting of the subjects is sth essential. 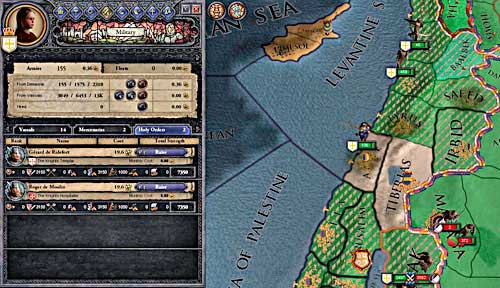 Most of citizens are muslims: without mercenaries and knight orders it's hard to create sensible army.

The only hope lies in knight orders: you can hire for little piety points and as you're defender, it'll be very cheap. Also vassals can be useful here, they can bring up more troops than the king. 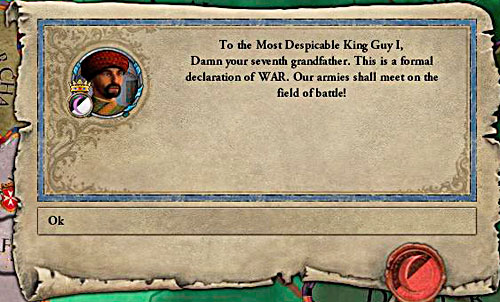 This statement is so often, that you'll stop noticing it.

Despite it, playing as a Jerusalem isn't too attractive. Even if you protect yourself with alliances it's almost totally concentrated on defending your lands. You can't even direct any advanced politics because of thousands Arabs attacking from every direction.

Byzantium is in the similar situation to the Jerusalem, but it can't count on knight orders and allies from Europe (catholics don't like orthodoxes). What is more, emperor has to take into account strong internal opposition, mostly because high crown authority (which you should lower ASAP). 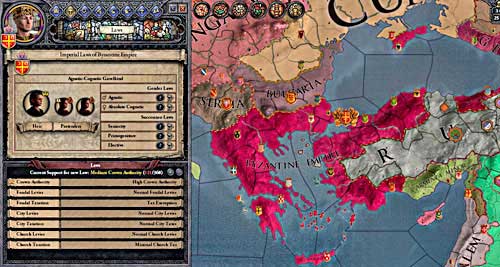 Vassals will be against even if the new regulations will work for them.

Byzantium has no claims and no declared war, so it can leads the politics in the various ways. Recommended is calming social disturbances (by land distribution) and softening of laws. Then you can think about conquering Rum (it's independent from two caliphats, so it's rather easy target). Conquered lands should open gates to the further expansion. 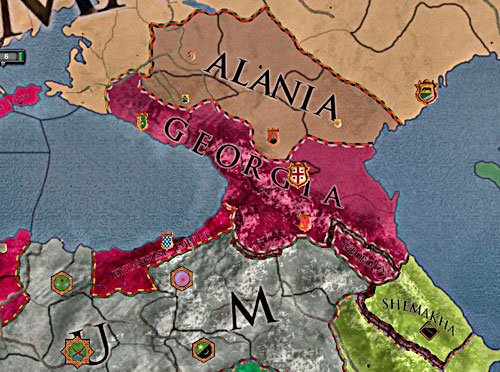 Georgia can be useful ally during wars with infidels, especially in case of the Rum.

The only country with which you can make a solid alliance is Georgia, the orthodox country on the east from Byzantium. But it's rather tiny helper than war titan.