Emperors are rather problematic persons. On the one hand they have really huge countries, but on the other hand they have not so strong authority. When you play as an emperor most of time you sacrifice for fights with vassals and securing the crown for you descendants. It's very difficult, because law systems in both empires aren't too profitable and difficult to change. That's why, before starting any expansion or foreign politics at all, focus on what is happening in your territory. 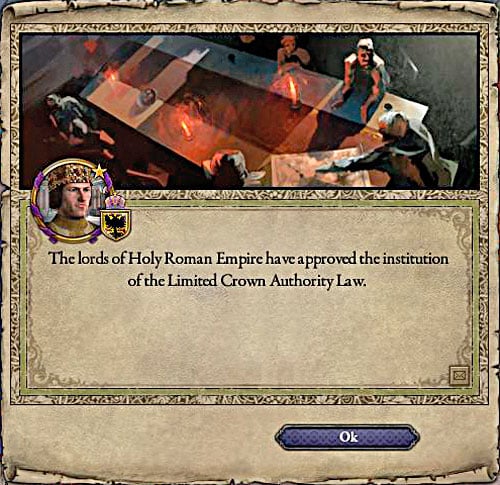 Only an emperor with enough authority can manage his empire properly.

Emperors are giants on clay legs: their power range is huge (the can control kings) but the possibility of exaction orders isn't that good. As a matter of fact, being an emperor means having constant wars and convincing vassals to you goals: it's not to attractive model of game. But when we secure our position, we can play like a monarch, but much more powerful.

When you play as a german emperor, the first thing to do are changing the crown authority and political system. At the beginning, the system in force is an election and the ruler has the minimal authority (look: Laws). To play comfortable, you need to change both those things. Usually it's better to start form changing an authority to the low (it lets you take lands away from vassals). 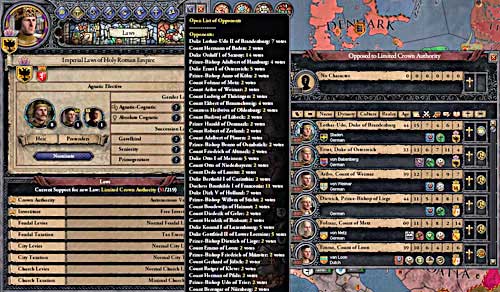 There are people to be convinced...

This change is essential. Without it you can't take the lands from vassals what means that you have no tool of persuasion. Collecting lot of lands and distributing it to the most important persons in the country is a base, only thanks to that you can count on serious changes in the empire. During convincing nobles it's even good to hand over them the most precious lands, because changing the political system is much more important. So bribe as many voters as you can, using all available methods. 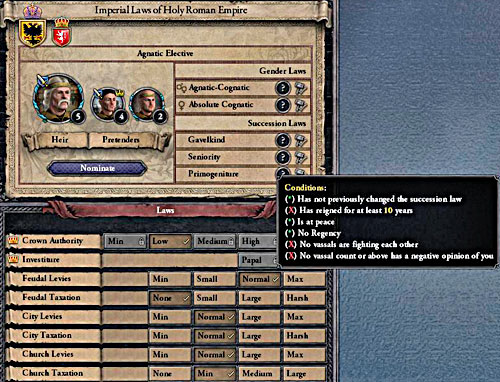 You have to fullfill all six terms (look at: House: Succession: Principate).

When you set low crown authority you have to change the succession way from election to the principate (look at: House: Succession: Principate). Only then you can be sure that the emperor's crown will be handed over your son. To change the political system, you have to care about positive relations with all vassals, beginning from the counts and above (list of them you can see after clicking on the emperor) do not be at war and wait until vassals stop fighting with each other (it's one of the terms). The last one term can be very problematic, because the empire is almost constantly bathed in blood. So, if you fullfill all conditions besides this one, consider killing an annoying vassal, what should stop the war and let you change the law.

Byzantium Basileus is in much better situation than his german equivalent. From the beginning he has high crown authority (it's even worth to decrease it!) and principate as an actual rule of succession. So internal problems goes to the background (you deal with them just like the king) and the external politics gets on meaning. Byzantium is surrounded by enemies from almost every direction. Especially dangerous are Muslim rulers, who often decides on jihad or just invade Greek estates. Fight with Arabs is an essential part of the game over your politics. 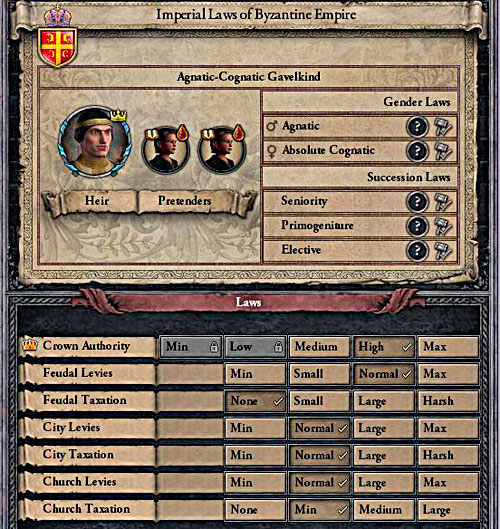 Laws in Byzantium are more than beneficial.

A big problem for a Byzantium emperor is a fact that he is an orthodox, what causes distrust of catholic monarchs and simultaneously limited your possibilities. For instance orthodoxes can't summon knight orders. Change of a cult is a bad idea (look at: Religion: Problem?) because it means a civil war.

Emperor's politics should be bipolar: you should conquer Arab's lands and addict from you as many catholic rulers as you can. It's easiest on the Italian Peninsula and northern Balkans, but you can try achieve some further lands (like Georgia or Hungary). It's quite simple as you can addict them from you and control them.