Monarchs are the most important and influential persons in the game. There exist emperors but they're usually too busy with the internal affairs to make some ambitious actions. That's why, kings as owners of large lands and wide rights (e.g. royal laws in Laws) have very different methods to get and keep the power. 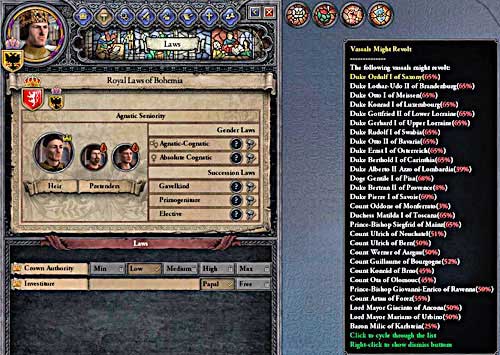 Monarchs and emperors have to fight constantly with their vassals and think about descendants.

Kings of course can use most of dukes and counts laws and possibilities(previous chapters) but besides that they have some challenges and problems typical for monarchs. Particularly troublesome is issue of keeping an order in the kingdom and succession: both are described below.

Taking over the Empire

If you depend on one of emperors (Byzantium or Holy Roman) you can try to get their crown. You can do it in legal way, by convincing (if there is an election system: Riding on a Top: Duke: Election) or using a war (Military: How to declare a war: Taking over the crown). Despite pretences, usually the second solution is simplest, because it requires less funds: soldiers and mercenaries are cheaper than bribes for all electors. 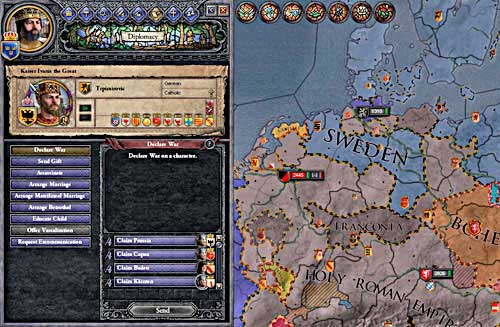 Although big part of empire belongs to the king of Sweden, he can't fight for the emperor's crown.

Getting an emperor's crown when you're not his subject is a tough task. Above all, you can do it only thanks to the voting (if there is a election system) or marriage(other system: House: Marriages: How to get a title thanks to the marriage?). Coup d'etat isn't a solution, if you're not an emperor's subject. It's clearly seen on the screen above: although the king of Sweden has part of the Holy Roman Empire, he can't fight for taking it over.

There is nothing against having few crowns by one monarch: but remember, that only one of those will be his "main", in which he can dictates laws. You can choose the preferable country by clicking on its shield in every monet and unlimited number of times. It's crucial because all you kingdoms have their own political rules, often contradictory to one another. For instance in one kingdom is principate and in the second one seniority. As a ruler of few kingdoms you can decide about succession and royal laws in every of them but not about the normal ones (look: Laws). 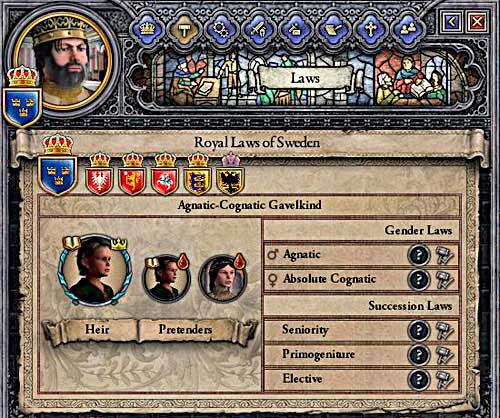 Five crowns and right to vote in the empire. Nice result for the count's grandson.

Next crowns you achieve in the same way like the first one (Riding on a Top: Duke). But remember that every next kingdom makes your subjects more dissatisfied: they'll start demand honours for themselves.

Every player who has steered the monarch for some longer time, for sure met with subjects' revolts. King's vassals have an iritating tendency to set many revolts, separations and coups. When they declare war on you, you can just defeat them and take their lands, or just kill them. But real master of politics can prevent rebellions. 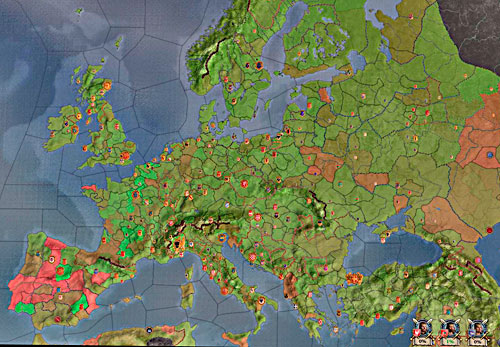 Characters' opinion you can learn by clicking on one of the map's filter (right bottom corner of the screen).

First of all, you should use the game's advices. If an icon of the clenched fist appears it means, that part of vassals want to rebel: it's worth to interest about them. Especially useful are delicate methods of persuasion described in the chapter Characters: How to care about human relations? If it isn't enough, use the court spymaster who should detect most dangerous plots, what allows you to imprison plotters (look at: Intrigues: Ambitions and conspiracies, Council: Spymaster and Intrigues: Prisoners). Eventually if the risk of revolt is really danger, you can pass the troublesome vassal to someone else(Characters: How to care about human relations?) You can use an assassin too, of course. 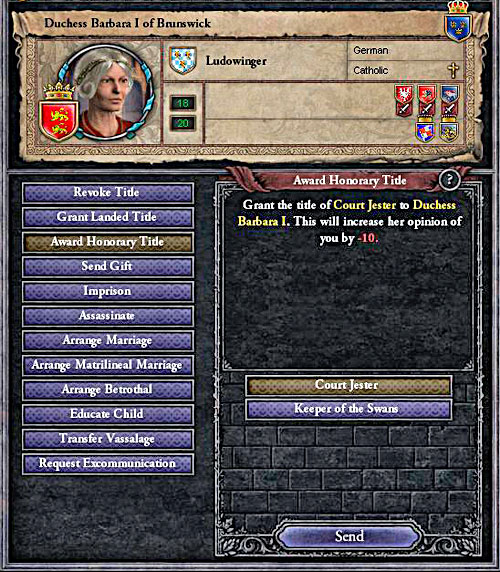 Iritating the subordinates may be profitable.

After all, there are situations in which it's good to make the subordinates revolt. If vassal is old and has no chances for children and his lands will leave your domain according to the succession laws, it's good to provoke him to rebel. There is a one of Honorary Titles dedicated to such goal: court jester.

Passing on the power

The basic problem of all kings is inability to pass their power to children: complicated succession, often in few kingdoms, doesn't make it easier. That's why you should care about vassal's opinion and choose such political system which provides non-problematic passing on the crown. The best is of course primogeniture but usually it's enough to have a principate. More about it you can read in the chapter Succession. 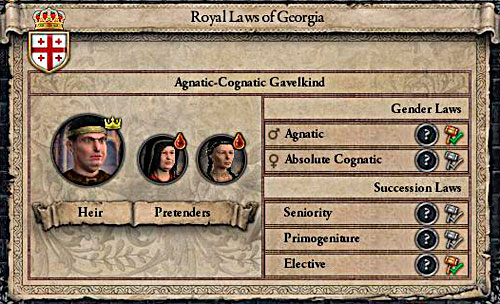 Laws are basic tools to pass on the power.

Rules of passing on the power isn't all; you have to also provide a worthy living to your descendants. There is no secret that you should have minimal number of children what secures country before dividing it on parts and civil war. What is more, just before the death it's good to collect lot of lands which will be handed over the descendant, what makes his life easier. How? He'll be able to distribute those titles, what will calm enraged vassals. Of course methods from Characters: How to care about human relations? are also useful, but not that strong.