Although dukes are inferior to the monarchs in cases of prestige and abilities, they have quite big range of power and privileges. Many rulers in the Eastern Europe (mostly in Russia) stay dukes to the end of the game, the crown isn't necessary for them. Despite that remember that dukes can rule over only persons with small meaning (I and II level, look to the Glossary), so all monarchs and other dukes will be out of their range. That's why gaining a crown should be a main priority for every ruler. 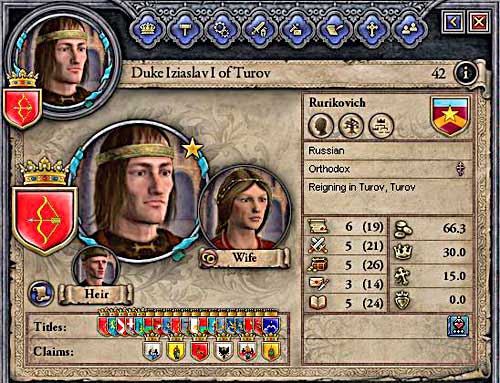 You can cumulate the power on many various ways. Part of them is the same as in the case of counts (previous chapter) but the rest is something new. First of all, as electors dukes can be chosen to be monarchs. What is more, if they have territory big enough which is a part of the kingdom de jure, they can usurp (or establish) its crown. Majority of dukes are closely relatives to each other, what makes assassinations a good solution. There are also more complicated methods (invasion, marriage), but they've been already described in other chapter (House: How to get a title thanks to the marriage? and Military: How to declare a war?).

In countries with the election (for instance the Holy Roman Empire) there is possibility to achieve a power thanks to the voting. To do so, you have to convince electors (list of them is in the list of sovereign's vassals). The easiest way to do that is of course bribery, but also some less direct method are useful. Especially splurge with the power: if you conquer lot of lands quickly, part of electors will vote on you. Also crusades or fight with infidels give you respect. If any of electors is very against you, consider killing or conquering him (when he is your subordinate, he has no vote rights). 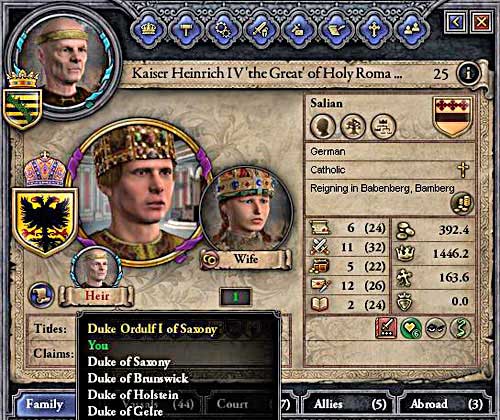 Thanks to the election you can promote from the duke straight to the emperor.

Of course to be chosen, you have to be a duke within the kingdom with an election or at least relative to the actual ruler. It means that the characters out of the kingdom have big problems with seizing the power: they have to firstly conquer some part of it and then convince electors. All in all it's possible if you're patient enough.

Another way to enlarge your range of power is simple conquer, which works like in the example of count (previous chapter). But dukes have an advantage: they can declare war on monarchs and even may win it. Another big plus of dukes is that they can easily try to bring down their rulers and get the crown, as it is described n the Military: How to declare a war: Taking over the crown. 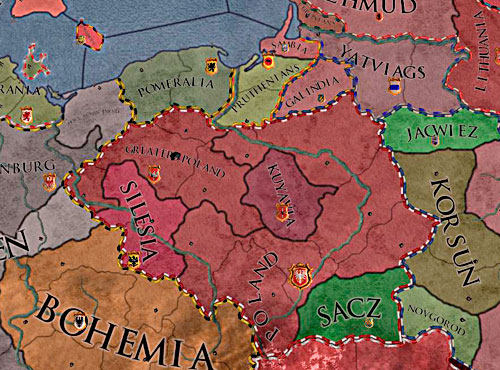 Maybe this time Greater Poland will unify the kingdom?

If you have a marriage with some woman heir of the kingdom, it's also worth to fight for the crown. How to get it is described in the House: How to get a title thanks to the marriage? Of course you doesn't have to limit yourself to the assassinations. If your son has rights to the crown because of succession you can start a war for it (Military: How to declare a war: Vassals' rights to the land).

The easiest of all methods of riding on a top is assassination. Thanks to the few cuts you can obtain huge lands and even a crown. It's especially seen in case of Russian dukes, most of them are brothers or cousins. Playing as one of them it's usually enough to kill the rest to conquer their lands. It's even more interesting on the Iberian Peninsula: in 1066 all local kings are brothers, so when the one dies the rest will get his lands. 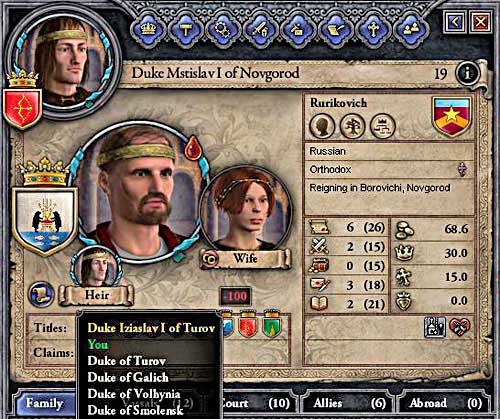 If you can take over son's lands, why not to do so?

If normal, valid family relations won't be enough, you can help yourself with the marriage. Wedding the princess and killing remaining heirs is a rather easy way for the crown. How to do it you can find in following chapters: House: How to get a title thanks to the marriage? and Riding on a Top: Count: Assassinate solution. In case of doubts, you may look in section Diplomacy: Assassination.

If you have most of some kingdom de jure territory, and it hasn't been established yet, you can make it. It's best seen on the example of the Czech duke, who has almost all lands of Czech kingdom (de jure) but nor him neither no one else has a crown. So it's enough to collect some amount of piety points and money and then bring to life new country. In that way the duke will become the king (screen below). 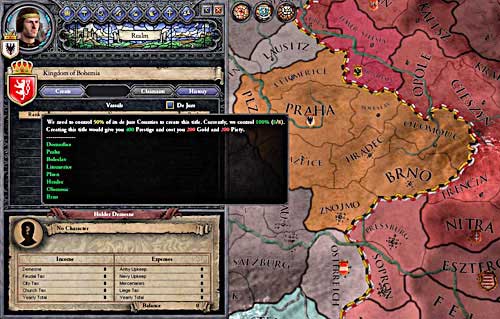 Czechs can create new kingdom very easily: they have all required lands.

In similar way it works in others countries. If you collect over a half of some kingdom's lands, you can create it. Usually it's connected with some conquers and marriages but it's very profitable.

New problem which you meet during playing as a duke is an issue of holding the kingdom united. It has to mentioned that your vassals are rather weak, and that's why they rebel rarely (but kings have to take them into account). A hitch is sth other: duke can't rule over the other duke , because of their equal status. It means that if you give to any of your subordinates even one, small duchy, it'll become autonomic and completely independent country. Conclusion is simple: you should have the least possible number of duchies (their growth is unavoidable during expansion), because each of them means growth of social disturbances (-10 to relations for every duchy more than the second one). The only one long-term solution is distribution duchies to your vassals, what is connected with losing control. Vicious circle? 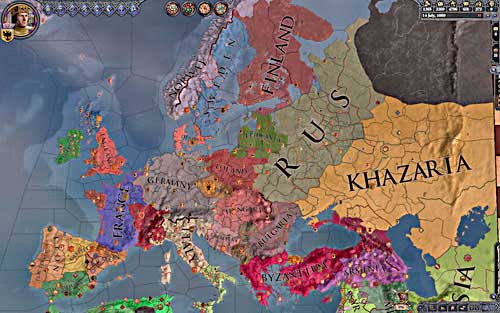 The solution is very simple: become the king. Monarch can control subordinate dukes so giving them lands doesn't mean losing of control. That's why achieving a crown is essential for every duke.