Counts, dukes, kings and emperors. Everyone from this group has other possibilities and meaning, everyone has to follow other priorities. That's why all those characters have a paragraphs below. Of course, ideas which are shown here are only suggestions, maybe you find better solutions. On the following pages you can find methods which are most often successful and safe and also the most effective. But if you want to fight for the power with an effort: free to go. Here it's described how to reach the honours in few steps and keep them. 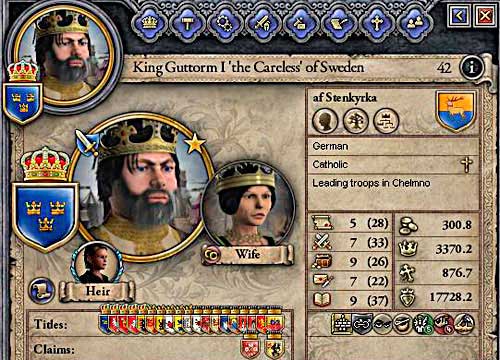 From poor count to the ruler of five different kingdoms - it's possible.

The game is so complex and unpredictable that describing all of possibilities is impossible, here you can find the most often occurred events and how to use them. With such advices you should cope with the game. If you do everything correctly, the laurel of the winner will be yours.

Although count seems to be a meaningless character, he should have no problem with riding on a top in fact. You can do it on four ways: forcible solution, voluntary, legal and assassinate (are described below). About what possibilities count has you can read in Basics: Choice of person, region and time: Count. 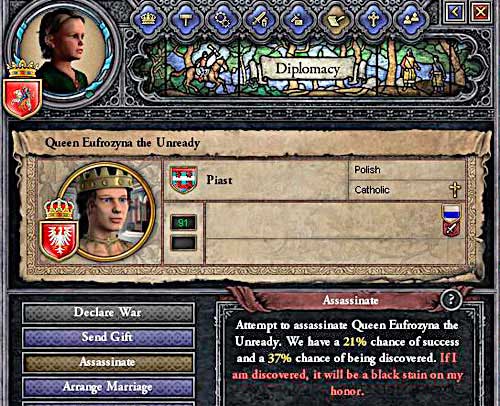 Politics is merciless: if its needed to kill your mother, you have to do it.

Forcible solution lies on declaring war on the enemy and taking his lands. So it's rather problematic method, because real force confrontation is a risky thing. To improve our chances we should secure ourselves with proper alliances (Diplomacy: Alliances) and only then attack an enemy. 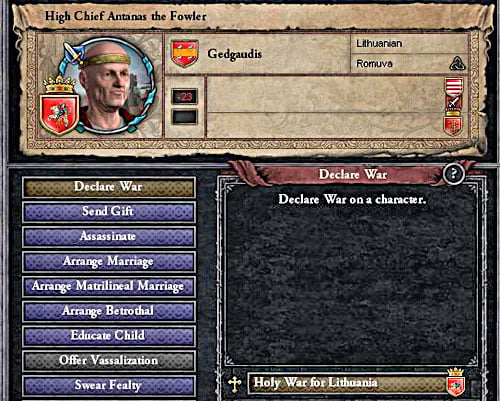 With allies' help war is very easy, even if you're playing as a count.

But remember that not all allies are eager to help in wars. If you attacked an enemy who is too powerful for them (or they like him more than you), you would expect a refusal. So usually it's profitable to attack pagans: no civilized nations like them, so they're an easy target. 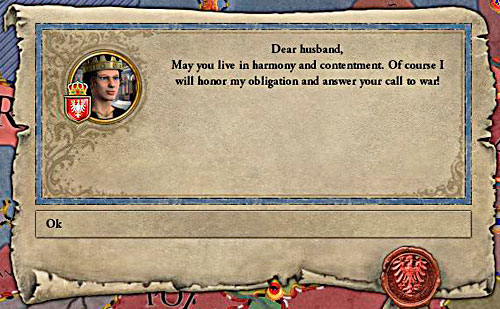 Volunteer solution is rather easy one but available only for counts who are dependant from the sovereign. Every sovereign can use his wealth as he want for example distributing it to his subordinates. Independently from how you served your lord, you'll sooner or later be granted with new lands, honours and maybe even a social promotion (on a duke). It comes out of a fact that ruler has to care about his opinion among subjects, so he'll try to gain their respect in that way. So benefit as much as you can. 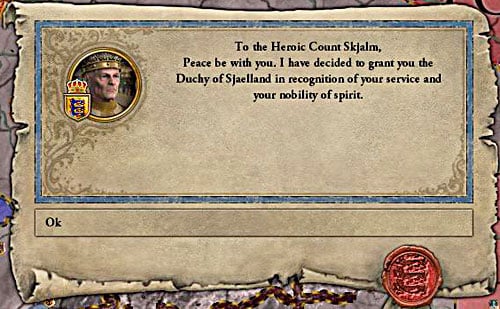 Good service is only a pretence.

This way is dedicated for players with enormous luck or big diplomatic abilities. Luck is useful, because without violence, assassinations and plots crown is hardly accessible. It comes out of simply reason: every participant want to achieve a success. That's why no one declares careless wars and makes unreasonable marriages. Only a lot of luck may cause that computer's plans won't be successful. But it happens, sometimes, so it's worth to have as many marriages with the children of the kings, as it's possible. Maybe someone will make mistake and you obtain a crown? 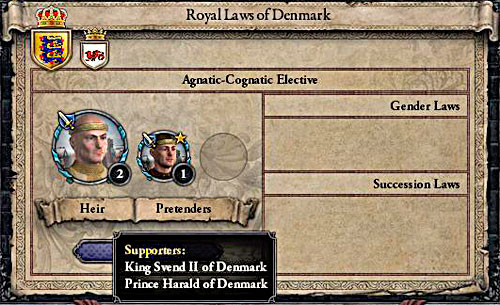 When you win the election, just kill the actual king and take over the throne.

Special situation takes place in countries where an election is. In such types of kingdoms you can support your luck with the bribes and sending chancellor to electors for convincing them to your candidature (look at: Council: Chancellor). This method requires heavenly patience: voters are very capricious and they can change their mind in every moment. But remember that you can't achieve the crown with such method: in that case dukes are electors (House: Succession: Election).That's why it's more profitable to choose less honest way. 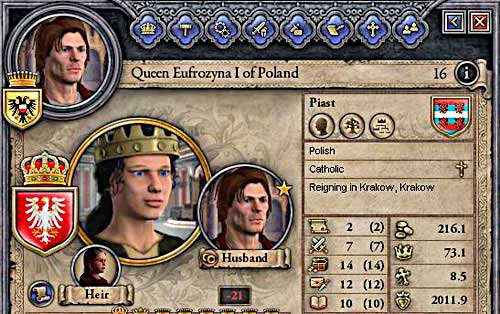 You can "help" your wife to gain the crown.

Assassinate solution is very peaceful at the beginning, but ends up with murdering all heirs. Scheme is usually the same: wed with one of princesses, have a descendant and then kill all her brothers and father. Thanks to that procedure your wife get the crown quickly, and her children will inherit all the country. The most important is fact that all children from this marriage will inherit the House after their father thanks to which you'll be able to control them. It's described in details in the chapter House: How to get a title thanks to the marriage? 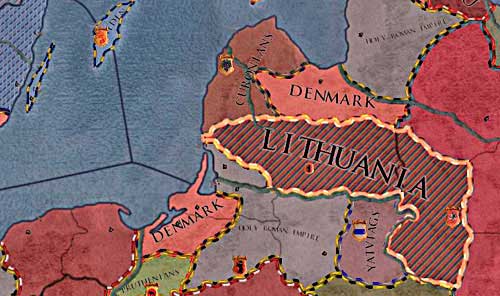 When your ally conquer an enemy, you just need to sign an agreement.

Of course there is nothing against having few wars before you take the crown. Count wed to the princess has an alliance with the ruler of the country (usually her father). That's why, even before the social promotion you can seize some additional land with help of your ally. It's all the same as in the chapter Forcible solution.

If you have a territory which is included into some bigger duchy de jure and which hasn't been legitimized, you can establish such duchy (it also works with the kingdoms). In such way the count is automatically promoted to a duke simultaneously gaining a rights to all remaining lands that should be in his duchy. All de jure terrains you can see by clicking the proper filter icon next to the minimap in the right bottom corner of the screen.

Instead of establishing a duchy, you can usurp it.

If the county is established, and count occupies most of its territory without having a title of the duke, he can usurp this title. It requires lot of money and piety points, but it's profitable. You do it exactly the same like the establishing of the duchy.