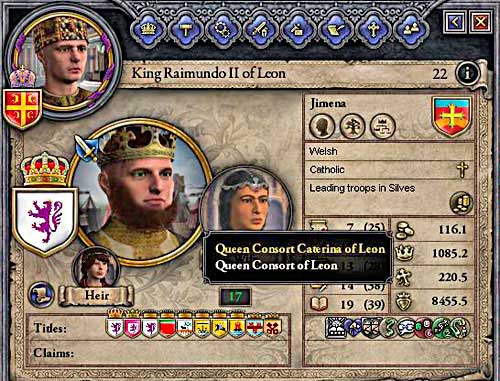 Additional titles have usually no meaning.

Prince, princess - child of king and queen, with no function. Making a marriage with some princes means an alliance with the whole kingdom. Look at the chapter Succession.

Consort - person wed to the king or queen, but without royal title. No meaning, but his/her children usually can inherit the crown.

Queen Mother - mother of the actual king. Although she has no meaning, but thanks to the marriage with her you can get rights to the crown for your children if you kill all of other heirs (Succession).

Regent - person reigning instead of sick or juvenile ruler. Has no power and his decisions depend on the sovereign.

Captain of the Varangian Guard - only in Byzantic Empire without any real power and lands.