History of the western Christianity knows a lot of cases when the war about leadership of the Church took place. Schisms and wars between popes weren't anything extraordinary, and long lasting religious conflicts are constantly inscribed in the image of medieval Europe. Crusader Kings II includes this element of history which is presented in both curious and useful way. 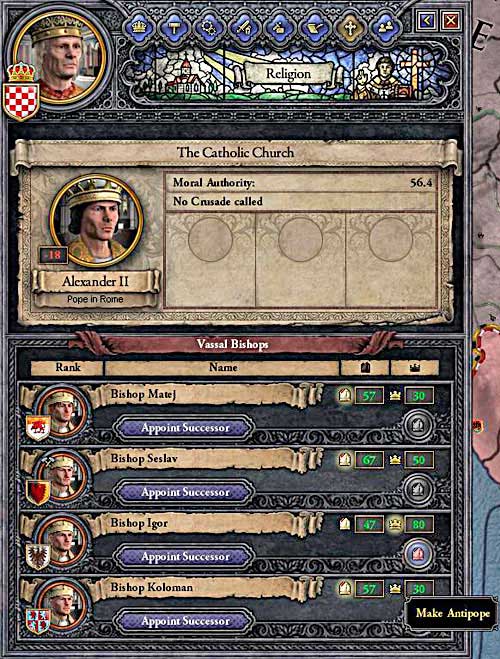 Not everyone agrees to fight against the pope.

If you're a catholic character and your relations with the pope aren't too well, you can consider appointing the antipope, who is your own candidate for the head of the Church. To do so, you have to fullfill few terms: have a right of free investiture, 500 prestige points to spend and find the priest who'll agree to become an usurper (he has to like you more than the actual pope). Only when you complete all those criterions, you can nominate the antipope (screen above). 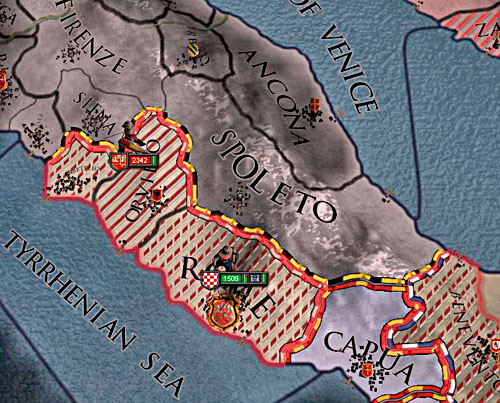 Vatican is rich, so that they can afford expensive mercenaries.

What profits are brought up with the antipope? First of all, he is much more submissive than the actual pope so it's easier to persuade him to the divorce or excommunication. The crucial is fast that after nomination only antipope can exclude your subordinates from the Church, because they're no longer subjects of the real pope. It let you on freely operating with the excommunicate in your domain and protecting it from the legal Church. 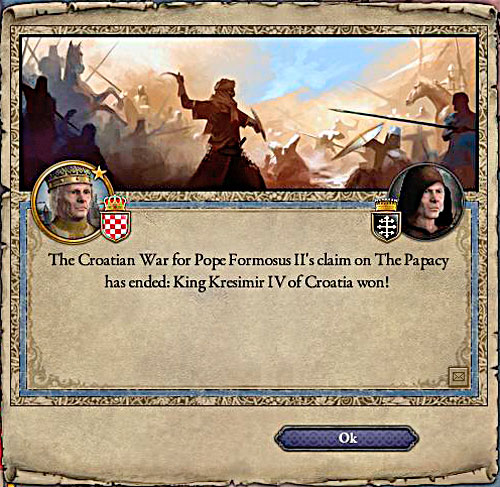 Wars with the popes are fought alone. Catholic rulers will then fear excommunication and they'll disregard an alliance with the player.

Antipope means also problems; legal Father of the Church won't be happy that he has a rival, so he can declare war or even a crusade against the usurper. Another issue is fact that the kingdom with the antipope won't be trusted by the catholic rulers. Luckily, you can solve this problem. You just need to attack the pope and after winning place your antipope in the Rome. In such way you can move back to the Church with very favorable, new holy father. 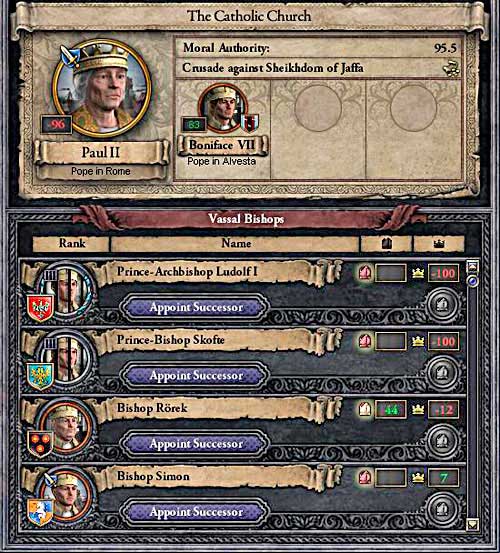 You can appoint successor to the antipope too, like in case of bishops (free investiture).

Despite of possible profits, having an antipope isn't really profitable. Chances of easy divorces and excommunications of vassals won't things for which you can risk a crusade and aversion of all catholic world. That's why it's better to stay pope's sheep than labour over problems.